REVIEW – You sit behind the wheel, your hands on the steering wheel, the car’s engine roaring softly. In the seat next to you are a Tommy gun and a baseball bat with dried bloodstains on it, a 1911 Colt watching in your pistol holster and a spring knife in your pocket. You’re Tommy Angelo, a dreaded 20s mobster and an excellent driver, Don’s favourite right-hand, the city’s number one public enemy. You started as a little taxi driver in Lost Heaven, but by now you’ve achieved almost everything you wanted: money, recognition, and a beautiful wife. And yet you can’t be happy because you know: one day your friend will shoot in the back… The Mafia – The City of Lost Heaven was a huge hit 18 years ago, the question is, can the remake, at the dawn of the new console generation, have the same effect?

Mafia has a real professional, cinematic story that can be measured for its classic movies (Godfather I-III, Great Men, Once Upon a Time in America, Borsalino).

We start as a simple taxi driver at the beginning of the game, but after picking up the gangsters of a failed action, their boss, Don Salieri, a full-time mobster and part-time bar owner, offers a job that our hero might accept too quickly… From here, Tommy is completely gone to the other side of the law and participates in riskier and bloodier missions. While at first, he kills only in self-defence, he later commits assassination and often has to shed the blood of (relatively…) innocents during his missions. Tommy is tormented by constant remorse and suffers most from having to kill one of his friends or a woman.

So the main character of the Mafia is much more human than we could get used to in other action games, so we can identify with him much better. Finally, I must mention the ingenious idea that we have only seen in classic films so far, namely that the whole story is told by Tommy himself to a cop, because he regretted his life so far, in return for the protection he gave up himself and the “family” that betrayed his boss too… 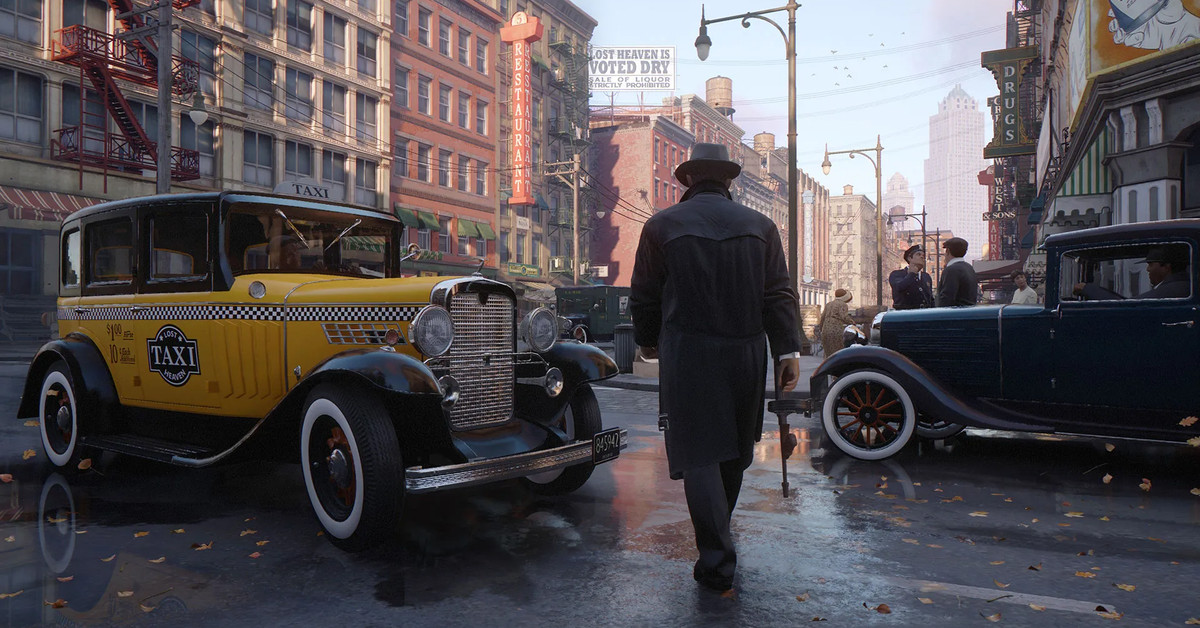 From a taxi driver to a godfella

Like any game with a carefully crafted history, the Mafia is more linear than its counterparts. For example, at the beginning of the game, we get taxi missions, but this time we can’t pick up anyone anywhere but have to transport clients to their destination from pre-arranged locations. Thus, at the beginning of the game, we get a kind of mandatory sightseeing and exploration “tutorial” (or sightseeing) of the city so that we no longer have to suffer so much from map viewing during missions.

This linearity will be characteristic of the game later on as we get the missions in the traditional way, one after the other, and we can’t move on in the game or do anything else until we’ve pushed our task down. This would, in principle, be a step backwards from GTA games, but the cinematic, often fantastic, pass-through animations throw up the game so much that we hardly notice this “flaw”.

Events begin immediately after the first peaceful taxi mission: Don Morelli, the leader of the rival gang, finds your taxi and sends some of his men to you to crush your vehicle to pieces and make a hamburger out of you with lots of ketchup. Now you still have to run for your life: luckily Don Salieri, the “godfather” of the two gangsters you saved, is waiting with open arms at his bar for you to join his family too. In the next mission, you can take revenge for your grievances by blowing up Morelli’s men’s cars at Don’s command. Of course, anyone who joins the mafia must also shed blood, and in the next mission, he goes through the first baptism of fire in a classic cinematic scene.

The new transition scenes – which are plentiful – and the dialogues are a bit rougher and more serious in places in the Definitive Edition when compared to the original, and the atmosphere of the classic mafia films was thus even more reproduced. 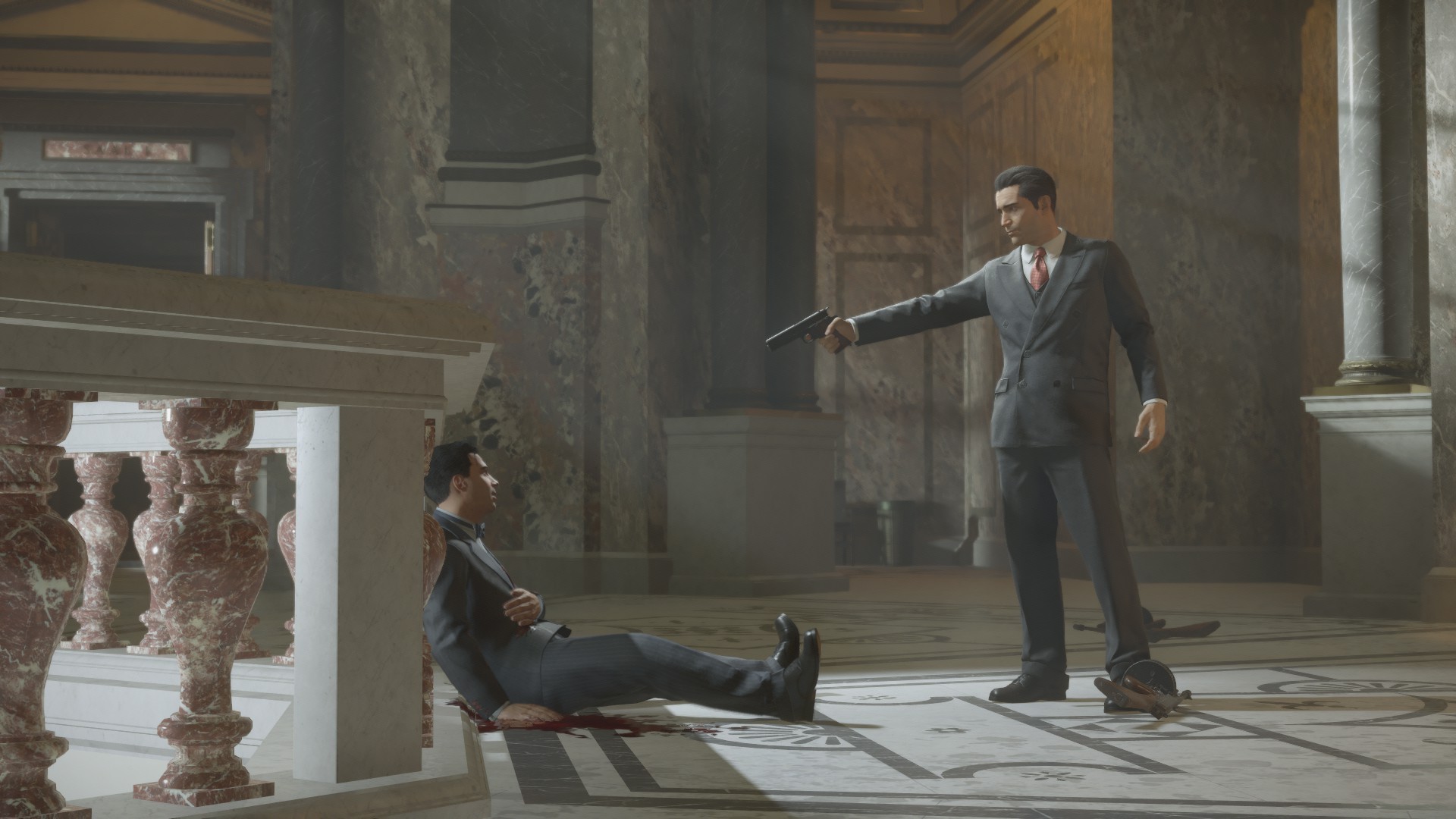 In Mafia, the focus is more on shooting, by the way: we have to drive many times here as well, but we will destroy the mass of mobsters attacking us with a pistol or rifle much more than once.

The action parts are otherwise quite heavy and unpredictable. Since we can’t save the game, we need to be careful with all our nerves that the hiding spaghetti-eating mobsters don’t shoot into a sieve. If we want to play Bruce Willis – by shooting everyone who lives and moves with lightning speed into a sieve – we’ll die soon, as the thugs love to hide and then spoil us at the most unexpected moment.

The enemy’s MI is sometimes quite OK: if they are outnumbered, they are surrounded to take it down, but if they shoot back, they are also taken into cover. Other times, he behaves in an incredibly silly way: he comes towards us, constantly shooting at us like a wannabe terminator, with no regard for their own safety at all.

Fortunately, the game is fair in the sense that enemy gangsters also run out of ammo, and in that case, it is no longer difficult to bring in a lucky headshot. It is worth operating the most with these anyway, because unfortunately, it is a big enough mistake of the game that it forced the “bullet sponge” damage model, in other words, we have to give a good body shot before it jumps.

A good point for developers, however, is that they paid attention to the variety of missions and also inserted some very original tasks. In one of these, for example, we have to accompany Sarah home because some bad guys have made harsh remarks about her. Before we clash with them to save the girl from the rape, we need to talk to her on the way to the apartment. (Unfortunately, however, the sex scene was missed, it seems the video game industry has become pruder in 18 years.) 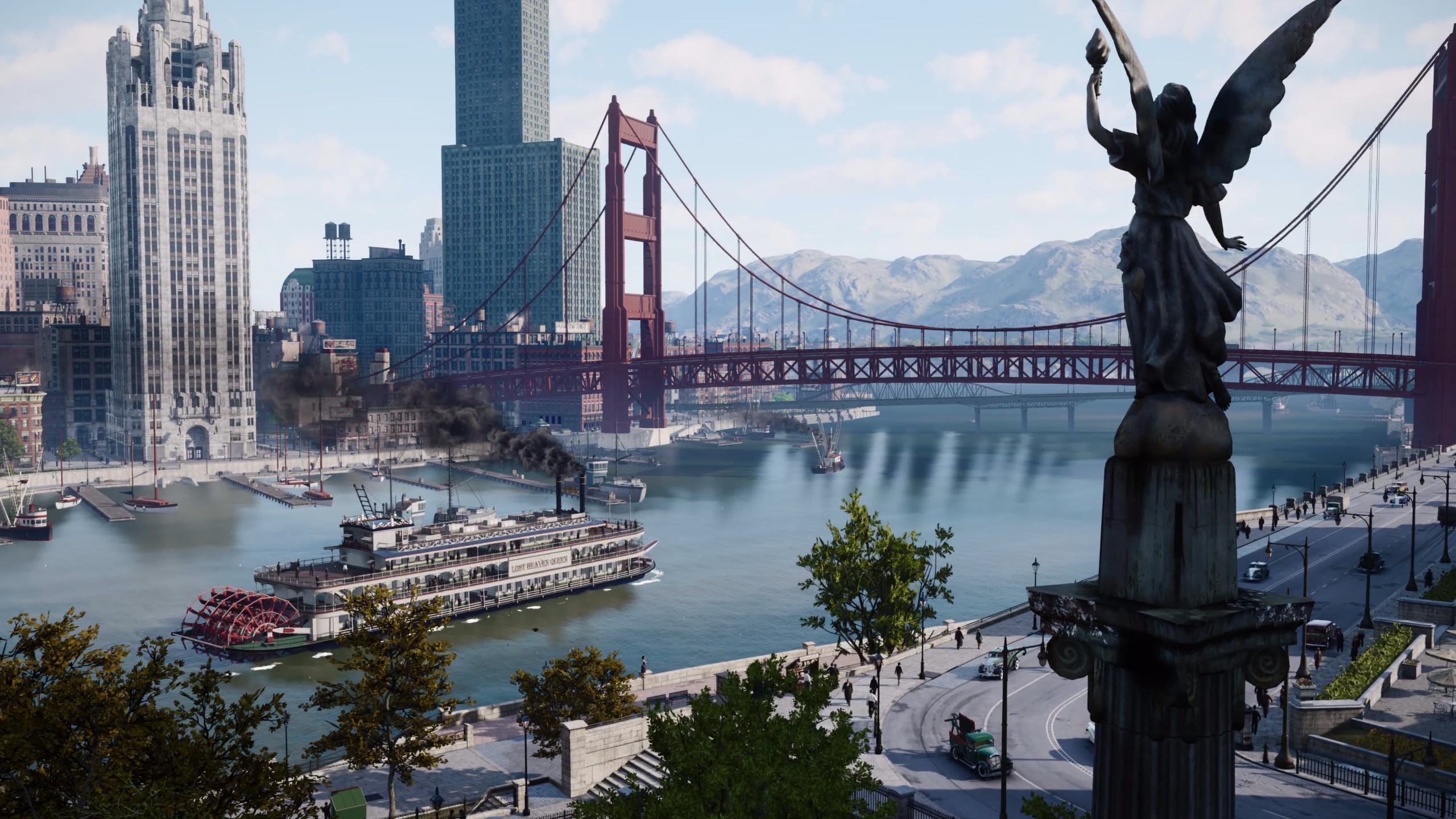 The power of novelty?

Considered a third-person cover-shooter, the game as a whole is more outdated, a little lamer to control than most of its modern counterparts, but not annoying, and this time it’s really fun to drive the cars. Contemporary cars were designed with amazing detail, whether in terms of acceleration, top speed or “horsepower”. At the beginning of the game, for example, the first few vehicles will barely wander on the roads, and the roughest is that it slows down cruelly on the slopes (even on the other side of a bridge like the Golden Gate!).

Even in the original game, the city had a fantastic ambience, thanks to plenty of twenties bars, shops, hairdressers, cinemas and other facilities, a tram ringing in the streets, and of course the sight of passers-by following the fashion of the time. Thanks to the brand new engine, the completely redesigned graphics – especially on the PS4 Pro console in 4K – are amazingly spectacular and absolutely evoke the thirties. The Mafia Definitive Edition exudes both the exterior and interior of buildings, with rich, detailed textures, beautiful rooms and furniture.

However, I also really liked the way the different characters dressed, it seems that the makers spent a lot of time studying the small details typical of the era. In addition to the graphics, the ubiquitous sounds of the city and the excellent musical part should be mentioned: in addition to the more bouncy action numbers, the competent connoisseurs will surely recognize the famous jazz melodies.

“This offer will not be rejected” (Don Corleone)

Mafia Remake is an offer you can’t refuse, thanks to the completely replaced, modern graphics, the original, a bit worn but still percussive story, and the great mood of the age. The new actors ’play is also a breath of fresh air in the passers-by: Tommy Angelo in the role of Andrew Bongoirno, Glenn Taranto as Don Salieri (although the look of the new character evokes one-on-one Paul Sorvino, who also played in the High Towers), or Don DiPetta as Sam, as a huge plus to the passers-by evoking Martin Scorsese’s films. After all, that’s the essence of the Mafia, so Grand Theft Auto’s diversity shouldn’t be expected of it, it’s a linear game, a real gangster interactive cinema realization in a more or less realistically presented, living, breathing city.

REVIEW - You sit behind the wheel, your hands on the steering wheel, the car's engine roaring softly. In the seat next to you are a Tommy gun and a baseball bat with dried bloodstains on it, a 1911 Colt watching in your pistol holster and a spring knife in your pocket. You’re Tommy Angelo, a dreaded 20s mobster and an excellent driver, Don’s favourite right-hand, the city’s number one public enemy. You started as a little taxi driver in Lost Heaven, but by now you’ve achieved almost everything you wanted: money, recognition, and a beautiful wife. And yet you…
Mafia Definitive Edition – Play again, Tommy!
Mafia Definitive Edition – Play again, Tommy!
Herpai Gergely (BadSector)
The Mafia will be a huge experience for those who love the atmosphere of the era and the classic gangster movies. GTA is it not, it’s a linear, interactive gangster drama.

The Mafia will be a huge experience for those who love the atmosphere of the era and the classic gangster movies. GTA is it not, it’s a linear, interactive gangster drama.