We are in small Japanese village, on a secluded island where the most fearsome ninjas are taught. A young European is of the best of them, but he still cannot prevent his beloved master and his whole order to be butchered by a completely unknown foreign army. Our hero swears vengeance and starts a lone mission to rid of the evil forces. Familiar story? Great. Then you can forget all this. In Strider we don’t have a real story since this is a game that focuses only on maximum carnage and no story at all.

Strider’s beginning couldn’t be simpler. The blue-clad warrior, whose face is concealed with a red bandana arrives flying with a glider to immediately start hacking away without a word to the unsuspecting robot soldiers.

Thanks to the perfect control, with Strider’s lightning quick movement and the lack of such “unnecessary features” as the opening intro some kind of coherent story or dialogues or we immediately find ourselves in the middle of the action. On the positive side of things PS4’s controller is just perfect for this 2D platform game which have a distinct “one man army” atmosphere throughout the game.

Of course, at first we only have one katana, but as we grow more powerful, so we acquire more and more deadly toys and stunts. Reflecting balls, throwing knifes with lightning fast reflex, and summoning a hawk summoning from pure energy are just some of the fantastic capabilities of which Strider are capable of.

Although Strider is “only” a 2D hack’n’slash game, thanks to the countless new upgrades, capabilities and weapons fighting against the most dangerous opponents almost requires strategic affinity. It isn’t evident which opponent requires which kind of weapon, capability or fighting style.

Strider is certainly a difficult game. We have to watch for rhythm of the action, make accurate jumps and use the proper capabilities as much as possible. In addition if we die sometimes we are back to a far check point which can be so infuriating that sometimes I almost felt the urge to throw the controller at my HD TV, the problem is that they are both expensive .

The boss fights are also merciless, we have to take part in real hardcore fights, which can be long and if we die we’re back to the beginning of the confrontation. Strider was a very hard game back in the Commodore Amiga and Atari ST era, and the developer team containing Japanese members didn’t change an iota about that. 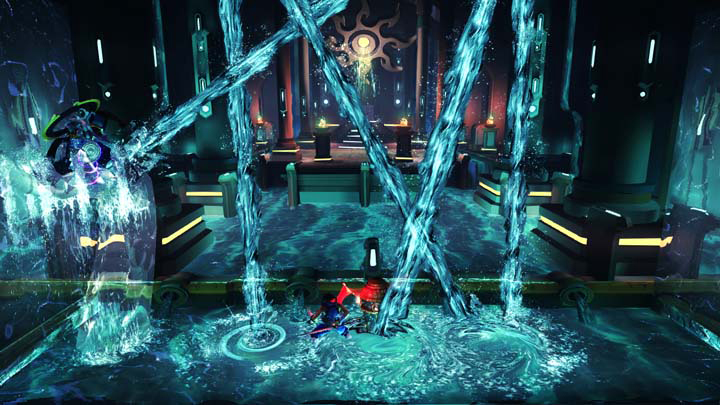 Despite the fact that the Strider itself is full of surprises, we cannot tell the same about the environment, which is very “repetitive” at best. We are always running in a big factory building which is actually a huge complex, so we never leave it throughout the game. At least our red scarfed, blue-clad ninja is more apparent from the background and we won’t stop to admire the beauty of the environment. I wouldn’t call Strider an ugly game but its graphics are rather functional.

From the moment that the first robot is cut off, Strider at its heart is a true professional 2D action game and it won’t change until we cut off the last boss enemy. We the constant introduction of newer and newer upgrades our hero becomes real killing machine, so success will depend on our reflexes only. So is the name Strider is once again worthy of its reputation? Yes, it is. Is the game innovative? No, not really. Do we care? If you are a true 2D platform action lover, you certainly won’t.

– Rather plain graphics
– Same area all over