It’s hard to rate MotoGP 14 objectively. I can’t think of a single PlayStation 4 game to compare Milestone’s recent game with, especially because I don’t think there’s any motor racing games on the PS4, so because of this, I’m going to compare it to last year’s Moto GP 13… Alongside this game, there isn’t much of an improvement.

So far, Milestone has made only a single game that I could think of positively. This would be WRC 3, released in late 2012. A year later, the 4th game arrived, which in my opinion was a devolution. I can’t say the same thing about MotoGP 14 though, because yes, it is improved, but not the way I thought it should have been improved.

More of the same

Let’s start by the fact that you’re going to be limited a lot yet again, when it comes to create your own rider in career mode. You’ll get six profile pictures, about 20 numbers, a few helmets, gloves and boots, but I wasn’t really able to personalize my virtual rider enough. After this I did get a surprise though: there’s actually a tutorial mode on the Valencia circuit (this is a recent tradition: the season always ends here in front of several thousands of fans), where you get to ride the best bike out there, the factory MotoGP Honda RC213V. You’ll get the basic grip – you will excuse me for the pun – of the controls, the pro and the amateur physics, and after the tutorial is over, you’ll get the chance to drive as much as you want to practice. 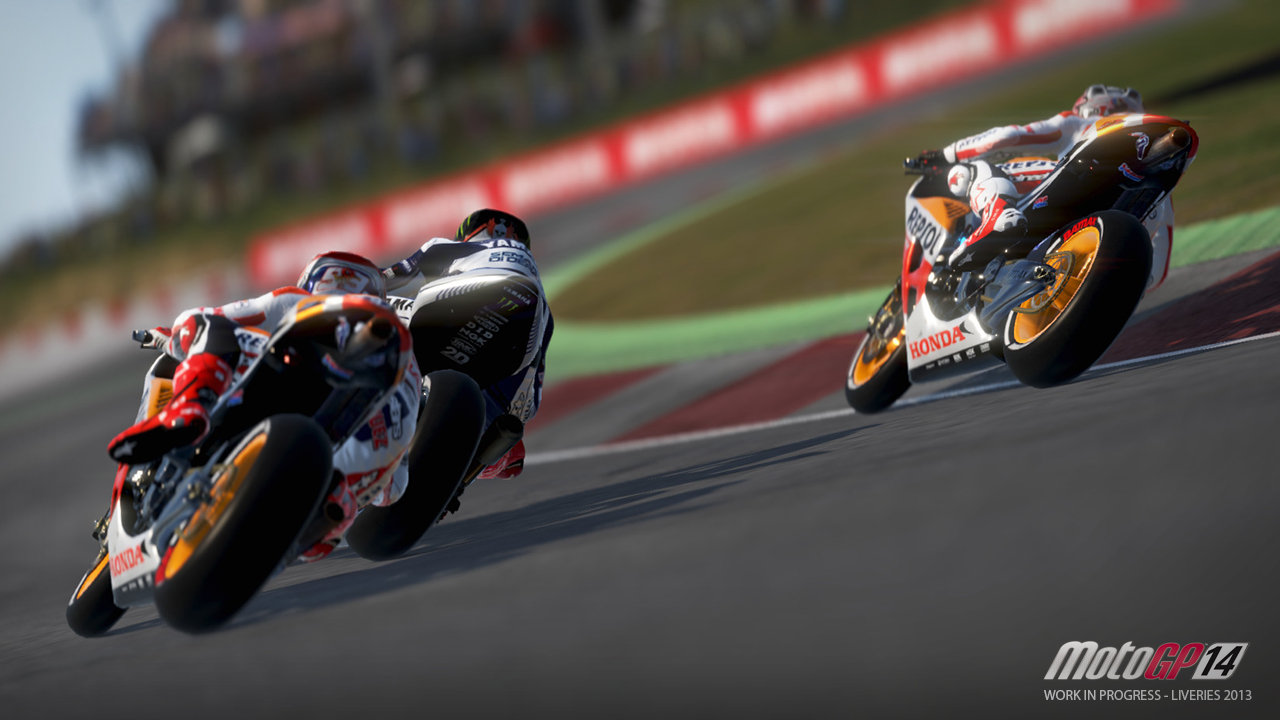 … and then the disappointment came. Last year I mentioned the career mode’s barebone functionality, and not much have changed this year. Of course, you can „move” between the bedroom and the „touchscreen” laptop, but it’s nothing else than a refurbished game menu. Nothing else. The career mode is the same as last year: you get two Moto3 wildcard entries to show you’re capable of a full year ride.

In the first race I still needed to get used to the controls, so I „only” finished tenth, but in the second race (where the leaders – namely Fenati and Miller, who kept passing each other) I managed to score a surprising victory. That was important. I wanted to see how the animation/celebration looks like if I get the first score at the “parc fermé”.

Oh Jesus. Please tell me I’m not reviewing a PS2 game! In the background, the team member’s animations are awful, and I have also spotted two members who have the same face – and they were next to each other. What the hell?! Oh, and the podium celebration is missing yet again. All you get to do is the parc fermé. When I got the contract, I wanted to see how the menu looks like. The laptop took over the newspaper’s role, but again, there’s no way to communicate with your fans yet again. However, a new addition to the career mode got implemented. You now have the chance to develop your own bike! It was about time. You get to choose which part of the bike you want to develop: the engine, the suspension, the brakes or the chassis.

You get data packs during the course of races, which can be used for development. Each parts of the motorcycle can be upgraded several times, but some parts need one, others need three packs. Interesting.

So the only new thing in the career mode is the opportunity to develop the bike. Would you want to have a much better team? Oh, you’ll need DLC for that. Oh cool!

Whatever, there are other new stuff too. Two game modes – with real stories in them – awaits you to complete alongside with their challenges. One of these go for classic drivers and their rides (ever wanted to be Daryl Beattie?), and the other one goes for 2013 happenings, mainly focusing on Marquez, Pedrosa, Lorenzo and Rossi. There’s one more weird option, the Safety Car mode. Drive the BMW as fast as you can around the tracks, and upload your best times to the leaderboard. Shortcutting is strictly forbidden, and going off the tracks results in time penalties. The game feels like a reskinned Moto GP 13. It lacks any kind of real improvements what you should expect from PS4 game. There’s isn’t any graphical improvements, it doesn’t feel like a current gen title at all. The music is acceptable, but the sound quality is just okay. And what about the physics? Well, they feel a little more serious this time around, but it doesn’t warrant a reason to buy Moto GP14 if you own Moto GP13.

And this is the main problem. Milestone promised the stars down before the release, but to me, MotoGP 14 is not convincing. I’m sorry to see that the Italian guys barely upgraded anything from Moto GP 13. But on the bright side, it kept the game for newcomers to enjoy, as the riding aids from brakes to correct line are all helping you. Later on you might find yourself free from these, stopping the un-de-feat-ab-le Marc Marquez in the end, who apparently is romping away hard, having won eight out of eight races so far this year… and he debuted in MotoGP last year, just saying!

+ Easy for newcomers to succeed
+ Development of your bike in career mode
+ The challenges – where were they in 2013?

– Barely improved…
– Graphically, it doesn’t look like a PlayStation 4 title
– DLC-s… in the career mode. WTF? Why Is Starfield And Maybe…

Crypto Malware Could Be Hiding…