REVIEW – It was utterly unnecessary to revive the V-Rally franchise. It would have been better if Kylotonn, who don’t seem to be capable of making an excellent game, did something else instead, and while V-Rally was never a professional series, 4 is worse than the three previous games in general…

It’s been sixteen years that V-Rally 3 released on PlayStation 2 and Game Boy Advance (followed by an Xbox port one, and a PC port one and a half years later, respectively), so I don’t understand what Bigben Interactive thought when they revived the series. (Ooooh, so Eden, the original developer, was based in France? I have no other questions…) 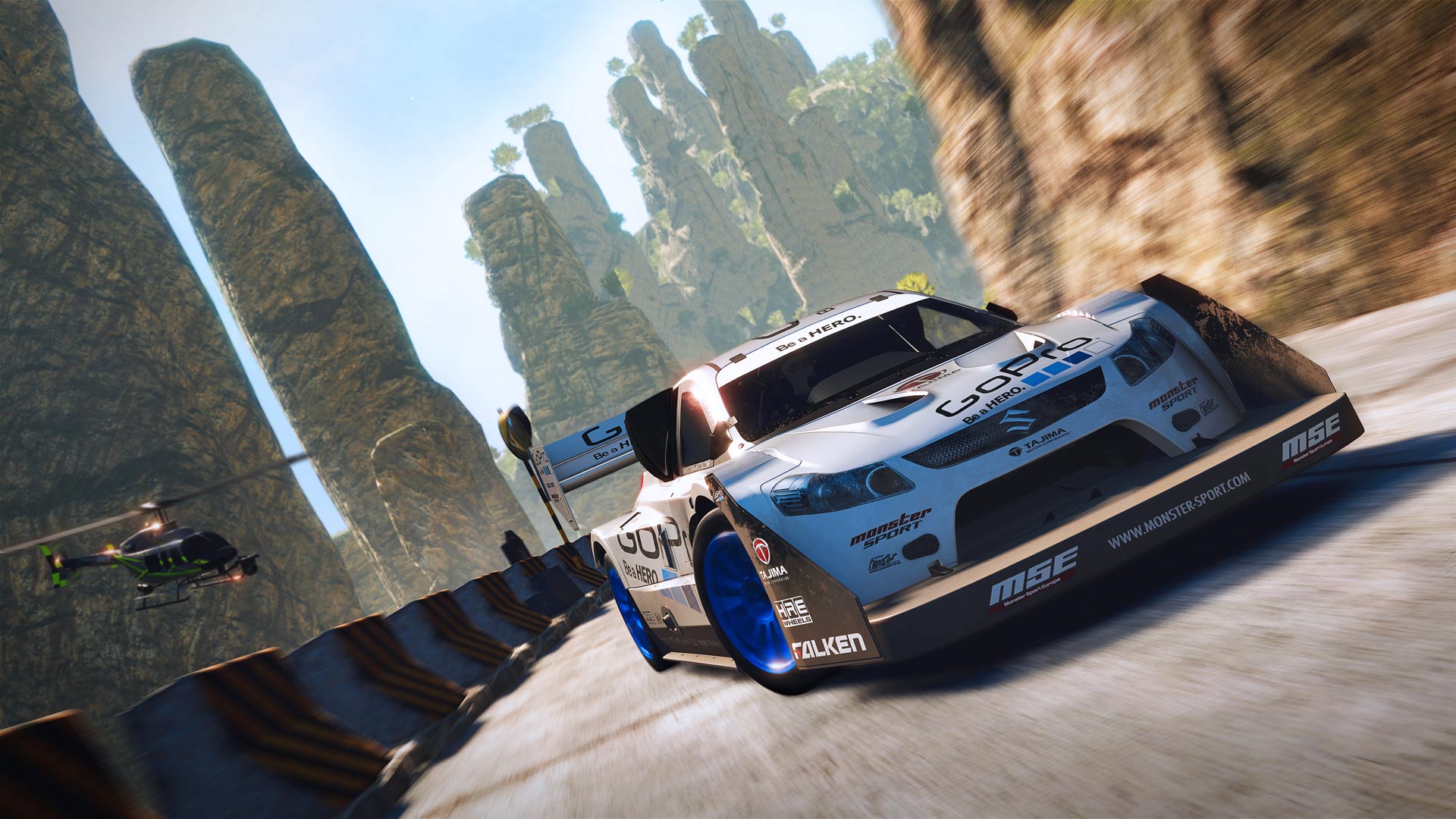 The game starts with a tutorial. I was already thinking about the meaning of life at this point; as in my opinion, the handling is garbage. As a teenager, I completed V-Rally 2 to 100% on PS1, and I got used to a stable, arcade handling model. Although I skipped 3 (which I could import… but I would rather not wait for the Hungarian Post to shit the disc out in half a year), 4 is drunk I believe.

One moment the handling is exceptionally twitchy, and at other times, I can barely take a turn. With a racing, or, in this case, a rally game, it’s a mortal sin, and I don’t think I’m the one that sucks at the game. The handling is catastrophic — Colin McRae Rally 2.0 from 2000 laughs at this game.

The game has zero licenses, so we can forget about WRC, rallycross (although unofficially, it’s here as V-Rally Cross). Instead, you’ll get Hillclimb and Extreme-Khana, the latter being an imitation of Gymkhana. At least the locations do not feel like imitations, as there’s some variety: Romania, Kenya, Japan, Malaysia, Bolivia, China, and America awaits us, and I have to admit: V-Rally 4 doesn’t look outright terrible.

There’s also a career mode, which, compared to 2 (I will keep comparing to 2 because, in my opinion, the franchise was at its highest at that game), is different – you start with some money to buy one car. The rest is about grinding to get all the other cars; there’s no complexity here at all, which was the case with V-Rally 2 as well. (In 2, you had three main modes – Championship from point to point, Arcade, where finishing mattered, and Trophy, where the lowest total time was necessary to achieve on circuits against three other cars; all had three difficulty levels.) I think Kylotonn should have included one car per discipline to have us start on the right foot.

But no, we have to grind from the random events, and we also have to pay our crew – this is V-Rally 4‘s method to keep itself played: although you will never have any money, you will usually have less than enough cash for the next car, because you must pay your team members, even though you will build zero relationships with them, making them redundant altogether. It gets boring, and having only one song in the career mode’s menu (not to mention, the UI feels terrible as well) doesn’t help either. At least Online Hub gets you more cash, but the live events get swapped regularly. 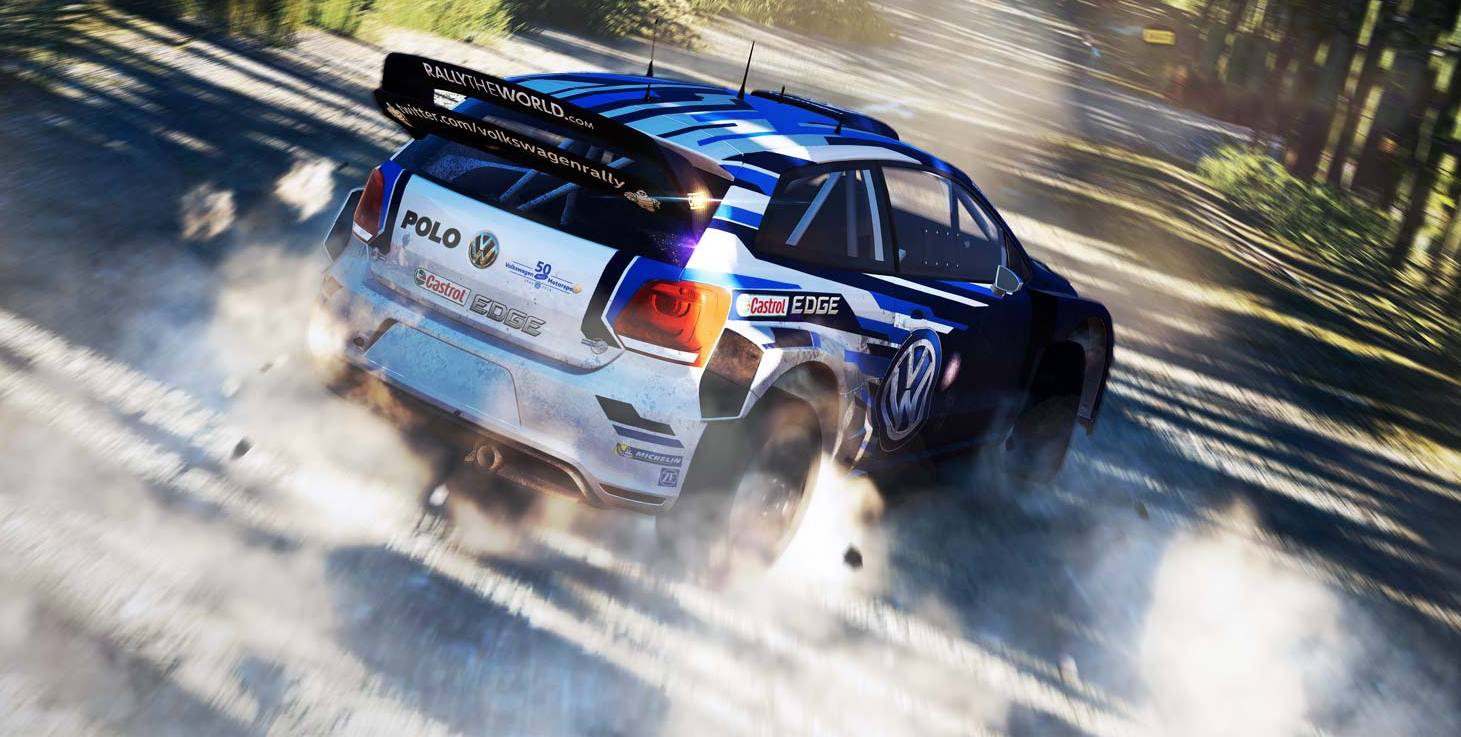 V-Rally 4 has such a ridiculous artificial intelligence that it has no logic. For example, the V-Rally Cross events are usually easy, but sometimes, one of the AI cars think it’s time to be far faster than the rest. And on the point to point rally tracks (where you are alone on them), the computer might set ridiculous sector times.

V-Rally 2 had a challenge, but it also offered you some room for mistakes, as the service area had time to get your car repaired. This is why I’d tell you to play split-screen multiplayer, due to the online being a barebones, minimum thing. Technically, get used to thirty frames per second on consoles, which might be another step back, and I don’t have anything to say about the audio, it’s that generic.

After 1.5 days of thinking, during a queue at Tesco, I finally realised how to describe myself not recommending V-Rally 4. It gets a 5 out of 10, yes, but that score is only achieved via the split-screen multi and the V-Rally Cross mode. However, there’s no level editor, which 2 had, and frankly, the game seems to lack the passion, which is felt in the product, too.

If you revive a new game sixteen years after the previous instalment, THAT’S NOT GOOD. Tony Hawk’s Pro Skater 5 came out 13 years after 4, and it was a garbage game. I’d only recommend this game if it’s for ten dollars or less. The handling is weak, the user interface is terrible, the game itself lacks heart. Even Milestone’s Gravel has defeated V-Rally 4. Leave it in the stores.

REVIEW - It was utterly unnecessary to revive the V-Rally franchise. It would have been better if Kylotonn, who don't seem to be capable of making an excellent game, did something else instead, and while V-Rally was never a professional series, 4 is worse than the three previous games in general...   It's been sixteen years that V-Rally 3 released on PlayStation 2 and Game Boy Advance (followed by an Xbox port one, and a PC port one and a half years later, respectively), so I don't understand what Bigben Interactive thought when they revived the series. (Ooooh, so Eden,…
V-Rally 4 – Corpseshaming
V-Rally 4 – Corpseshaming
V
Vile Rally Four.

User Rating: Be the first one !
Spread the love
Tagged Bigben InteractiveKylotonnRallyV-Rally 4 REVIEW