REVIEW – Unfortunately, I’ve been assigned to terrorise the godknowshowmany readers this way once again, which is just as horrifying as this game, but I do have to say that it is a good game. That’s my Observation to get the obligatory pun out of the way as quick as possible.

Observation shocks and docks us on a space station, and – nomen est omen – for the most part (but not ALL the time), we’ll have to resort to using the camera system, giving us several claustrophobic moments. I’d call this game a hard sci-fi thriller that might even better than the 2017 Prey. In fact, I believe it might be Devolver Digital‘s most successful game in 2019. 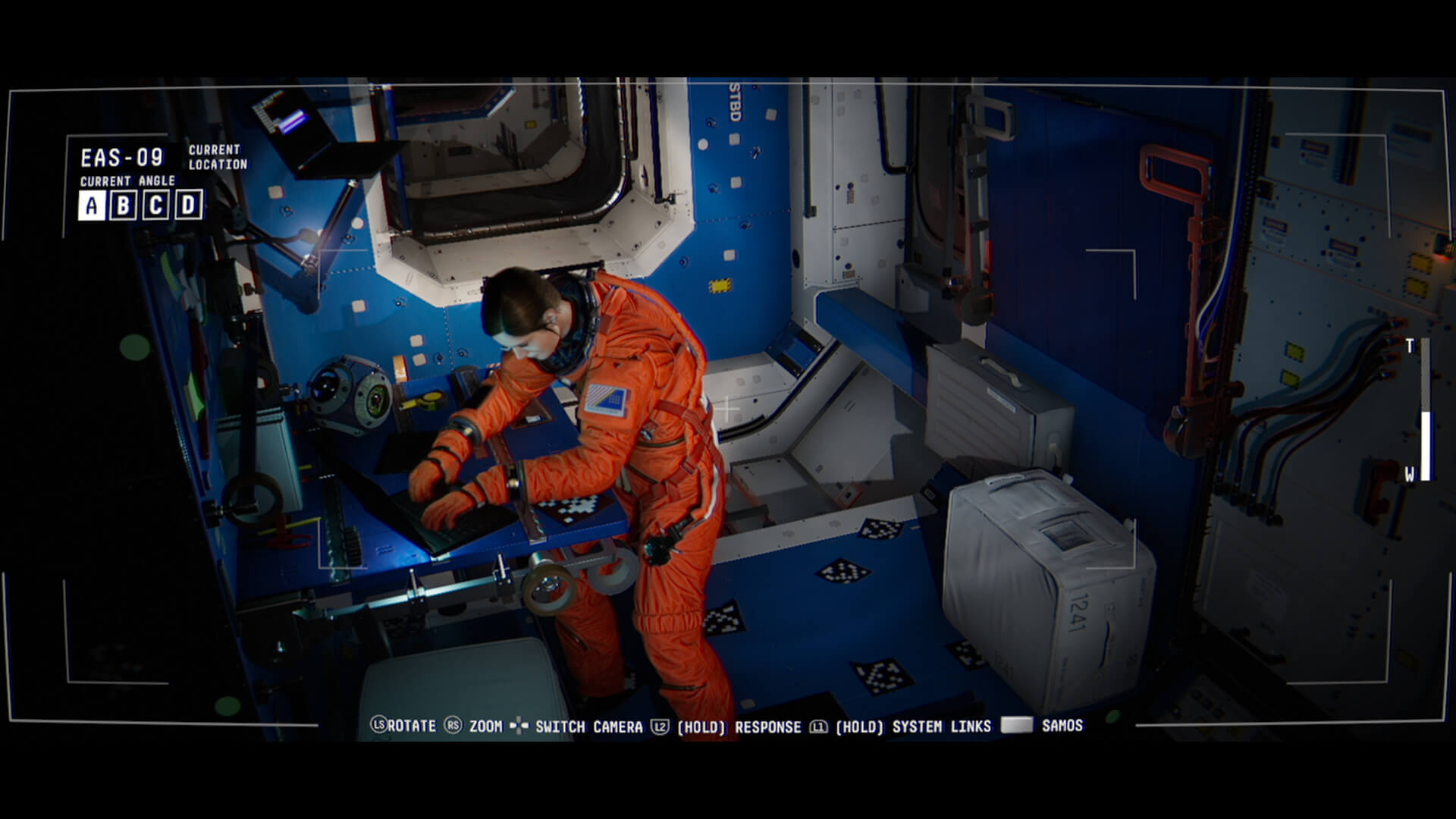 We’re in 2026. Emma Fisher awakens without the ability to contact anyone on the space station. We get to control an artificial intelligence companion called SAM (which is Systems Administration and Maintenance for short), and via it, the camera system, nearby panels and computers can be controlled – our area will expand along with the story, which will roll out over time. We should let the story take its time to pick up the pace, especially how it will already throw a twist at you roughly after thirty minutes of gameplay. And that is just the beginning!

Observation has a unique style. The fact that the cameras cannot really take much of you as you swap between them (think of tuning analogue television with all its visual and auditory noise – the past and the future collides together with a retro-futuristic take), and as everything distorts, well, it definitely reminded me of the Alien films. Via the cameras, slowly (!), and not the abused, and by this point, a fairly tiresome and annoying method of jumpscares were used to build tension. No – Observation instead builds your fear increasingly as you play. You have to keep an eye on documents. Open/close doors. Learn the interface. It seems easy, and for the most part, it is, even with time limits used here and there. You can get used to it without any problems… until you suddenly switch to using a certain droid that is called Sphere, which rolls out another layer of gameplay, as it is OUTSIDE the space station. Observation, unfortunately, falls away from a 9 out of 10 here: I think its handling is problematic. I don’t mean the lack of gravity outside. I mean, it has issues navigating tighter spots altogether.

While my Internet decides to not work, it reminded me that Observation didn’t launch in the best way at all. Going back to checkpoints might be a semi-regular thing in the gameplay, especially if a certain scene or event does not get triggered – if you get stuck, which could happen, it might not be because you are dumb. Here’s when Observation loses an 8.5 out of 10: at a few points during the story, the game doesn’t seem to be entirely clear on what you should do next, and you might get hindered by a few glitches, too.

Then, you should redo everything in the previous few minutes, as the game doesn’t seem to save after every major event. Visually, Observation doesn’t seem to be too shabby, and audio-wise – aside from the aforementioned effects – it’s also good (and I have to mention that the somewhat lack of music does work well!), as there are a few audio logs, too, so you don’t have to entirely rely on reading and reading and reading to get a comprehensive understanding of the background story, which is set around the International Space Station (gee No Code – who previously worked on Stories Untold -, how creative did you get with the naming?) It’s a shame that the lipsync seems to be problematic, but seeing it’s not an AAA game (you can currently get the game due to the Epic sales for about 9 dollars – worth that price!), it was somewhat expected.

Observation also seems to have taken cues from 2001: Space Odyssey, too – it’s a shame that it is an Epic Games Store-exclusive on PC, as this game is a strong 7.5 out of 10 for me, which hasn’t really been the case recently (especially in the past month – let’s just say chickenpox is no joke, and I dealt with Mordhau while having that). You might ask, why am I not giving Observation an 8 out of 10? The answer is simple: personally, I didn’t feel that Dr Emma Fisher’s character was thought out well. She seemed to be nothing more than a shell. That is the only reason. Still, if you like psychological thrillers, as well as retro hardware in a sense, then Observation is a great purchase, and since it’s also available on PlayStation 4, you can play it there, too. The issue with that port is that it doesn’t have PlayStation VR support, and in my eyes, it would have been an excellent addition to the game. A highly missed opportunity, dare I say – the devs should consider adding it!

So if you didn’t like the 2017 Prey (for me, the 2006 game rules), you’ll have less action but more ambience. Looking for survivors became one of the strongest titles of the Spring. If you’re impatient, you’ll not appreciate this game. Well, I hit the character limit.

REVIEW - Unfortunately, I've been assigned to terrorise the godknowshowmany readers this way once again, which is just as horrifying as this game, but I do have to say that it is a good game. That's my Observation to get the obligatory pun out of the way as quick as possible.   Observation shocks and docks us on a space station, and - nomen est omen - for the most part (but not ALL the time), we'll have to resort to using the camera system, giving us several claustrophobic moments. I'd call this game a hard sci-fi thriller that might…
Observation – Astronaut
Observation – Astronaut
V
Not the usual horror - is space the final frontier?

Not the usual horror - is space the final frontier?