Blasphemous – With A Cone On The Head REVIEW – This time, it is a Metroidvania that was previously on Kickstarter, and style-wise, it could be put into the group of 2D Souls games – a prime example of that would be Salt & Sanctuary.

The game, which describes and displays the medieval Catholicism in all its glory (or gore more like), doesn’t want to he historically accurate (why do that?). Instead, it takes a turn towards violence, then goes off the track over the curb on the exit, onto the grass, then back to the road with a slight drift. Blasphemous is a decent game if you have enough chill pills and if you can’t break a random device or thing near you. 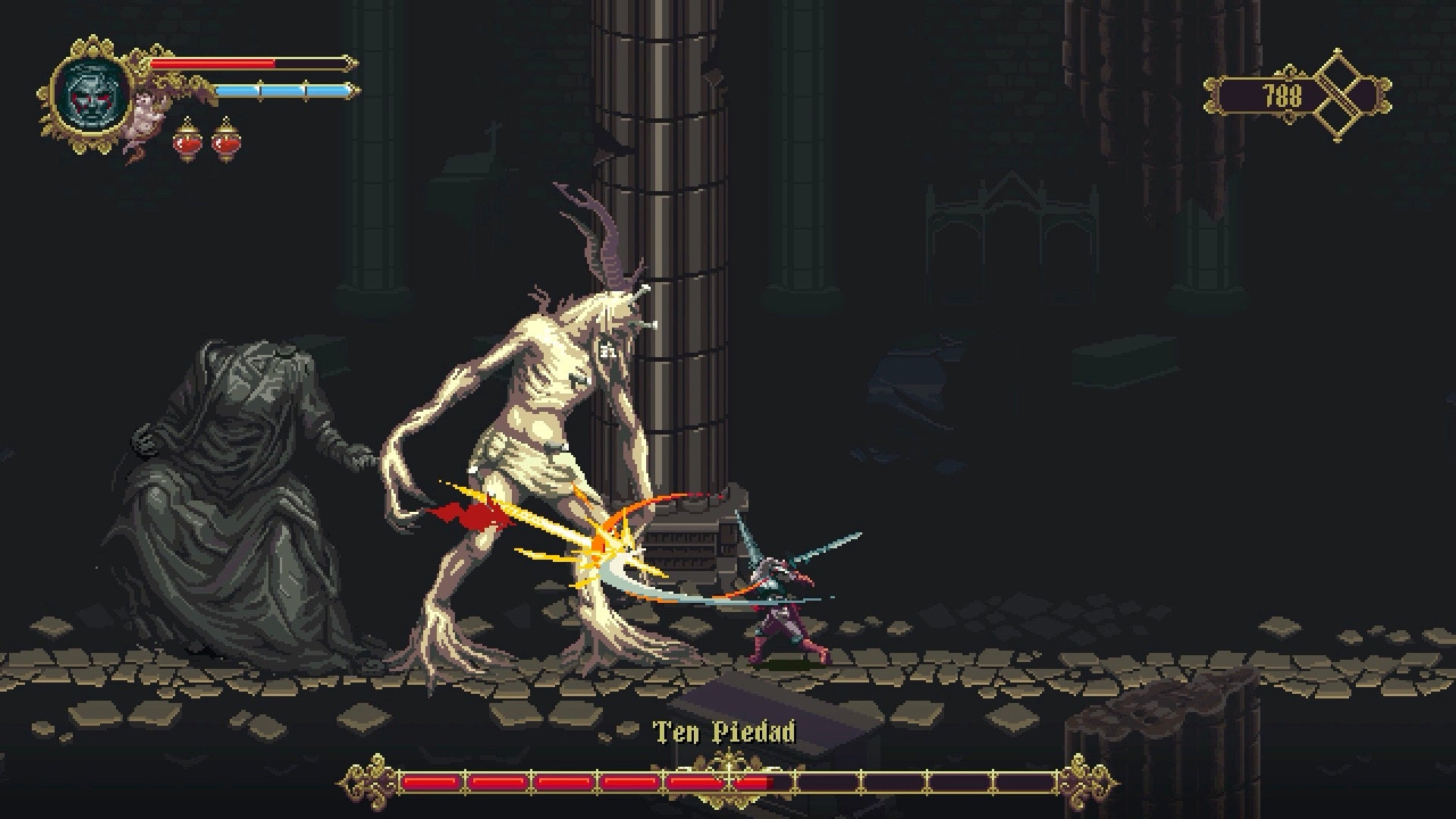 We have seen the basics of Blasphemous in the past few decades in the gaming industry. The approach of putting you down into the middle of nowhere to let you figure what to do has been started by Metroid, and this can be combined with the fast-paced combat seen in Castlevania games that tend to be difficult (one such example would be Dracula X on the SNES). Games in this genre (but not in this STYLE!!!) have been aplenty recently – one title that got attention in the past few months would be the not-Castlevania Bloodstained: Ritual of the Night. Style? Yes, this game has a lot of that. This pixelated art style is outstanding, or, should I say deadly? It creates an appropriately dark atmosphere, which allows nice details (which is quite surprising), but, unfortunately, there aren’t a lot of colours, as aside from the regular red colour (seen via the gore…), you will mostly see shades of black and brown (plus their combinations) on your display. If you move on from this aspect, then take a look at the animations, which should make you nod in respect, as yes, they are done quite nicely. The combat is also acceptable (but it might be a little too slow, which can also be said about the movement…?), but I’d also say that it is somewhat easy.

Yet, it is a pleasant sight to see and experience how we dodge the attacks and use the slightly limited time to perform parry moves. I can’t define it all with these words – this is one of those games where you have to experience it all, and if you start to level up, don’t go and think that you will get a major advantage over your enemies, as the obligatory skill tree (I think I have used this term in my past five or six crimes in the past two weeks, I swear…) will allow your cone hat-wearing character (whose name would be The Penitent One) to get some power, but with a little attention, experience, and some chill pills, you can eventually succeed to be immersed in this religious world of Blasphemous, which happens to have a take on history I have possibly never seen before in another game, which is why I can safely say it is a properly unique product, and props for that. 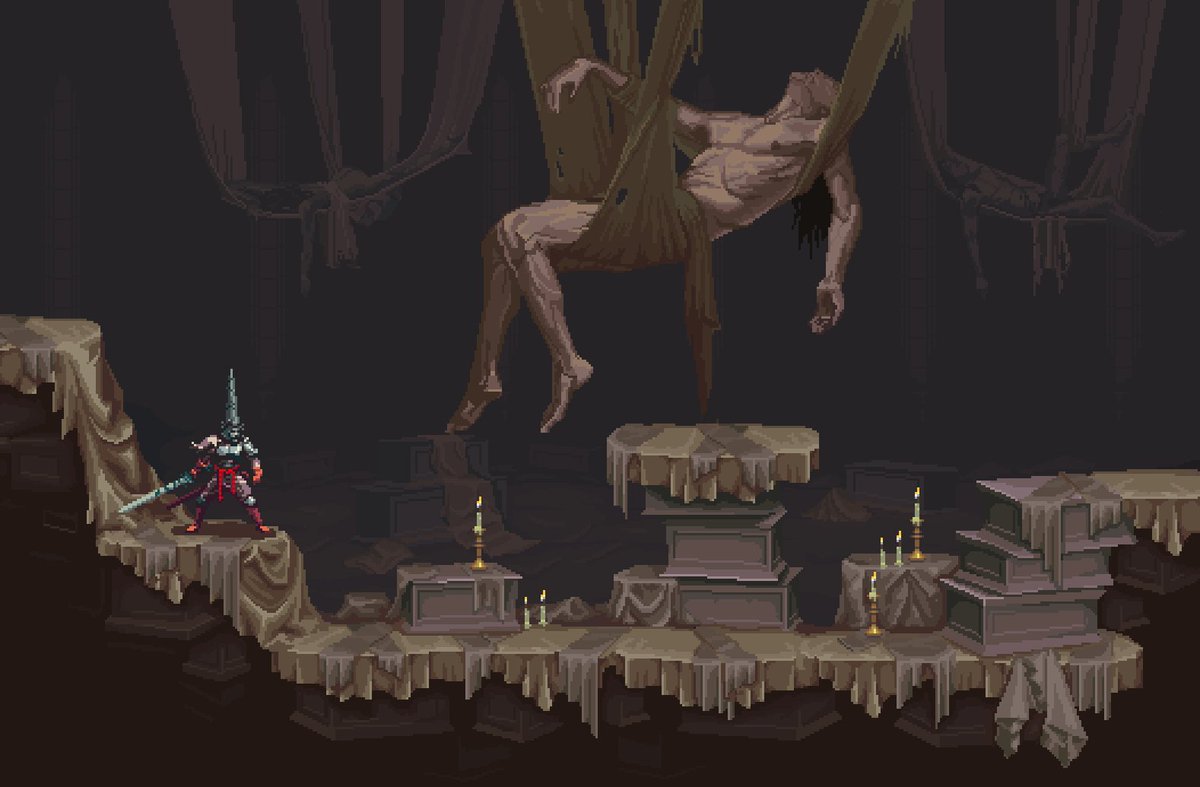 The religious environment (and the constant hints at the human suffering, to which I can relate), and our brutal gory moves are fine, but I haven’t mentioned the soundtrack yet, which might seem far too minimalistic on its own (therefore, I don’t recommend listening to it on YouTube), but in the game, it provides a fairly reasonable ambience, achieving its task. The tip of the iceberg is thus good, but there is no depth here. Let me explain – no, I don’t mean the fact that the healing move might be a liiiiittle too slow, no. Instead, I think you get a single weapon to use in the entire game, and you don’t have a lot of moves in your repertoire either, so you can only upgrade these, or just use some rare spells that you can find (and there are likely just a single-digit number of them in the game). The gameplay is limiting far too much, meaning you have to play the game in a fixed mode, which is where The Game Kitchen has lost a point in my eyes – a little more variety could have earned it an 8/10.

So Blasphemous gets no higher than a seven out of ten, as its good things don’t have enough power to make this Metroidvania, published by Team 17, an outstanding one. The story, the style, the soundtrack, and the passionate-looking combat face the fact that the game doesn’t let the player roam free in their playstyle, plus there might be some difficulty (which isn’t a negative factor), but you might end up using your weapon with closed eyes by the end. So, the situation is that this game looks fancy, yes, but it has put an emphasis on the visuals for the sake of the depth in gameplay, so you get a beautiful game but NOT a game with beautiful memories. The enemies’ unique death animations and the finishing moves don’t matter much in the pace, even though Blasphemous was advertised as a fast-paced game. So, it can only get a seven out of ten, and I don’t recommend a purchase either. Bloodstained: Ritual of the Night is recommended in the genre (and it might be running properly on the Nintendo Switch by now…). It’s a shame, or, a blasphemy, at the end of the day.

REVIEW - This time, it is a Metroidvania that was previously on Kickstarter, and style-wise, it could be put into the group of 2D Souls games - a prime example of that would be Salt & Sanctuary.   The game, which describes and displays the medieval Catholicism in all its glory (or gore more like), doesn't want to he historically accurate (why do that?). Instead, it takes a turn towards violence, then goes off the track over the curb on the exit, onto the grass, then back to the road with a slight drift. Blasphemous is a decent game if…
Blasphemous – With A Cone On The Head
Blasphemous – With A Cone On The Head
V
Blasphemy

User Rating: Be the first one !
Spread the love
Tweet
Tagged Blasphemous REVIEWNintendo SwitchPCPlayStation 4Team 17The Game KitchenXbox One