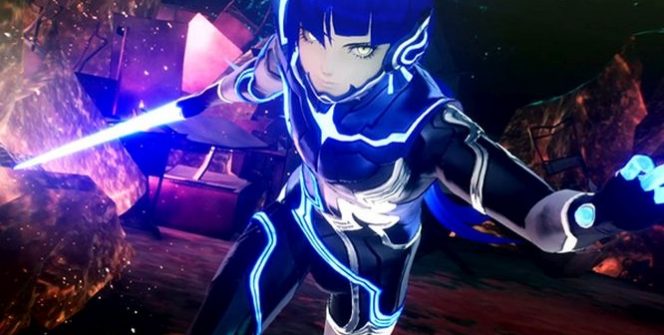 REVIEW – The Shin Megami Tensei franchise has been around for thirty-four years, and many of you may be familiar with one of its spinoffs, as the Persona series was spun off from it in the late 90s. SMTV didn’t try to be that scary this time around and kept the same negatives typical of the franchise.

Sci-fi style, a dying world, explicitly robust environmental design: just a few of the ideas that Shin Megami Tensei’s fifth main title has reached perhaps unprecedented levels of, and, of course, the end of the world is mentioned at the beginning. Then the opposite is apparent as the youngsters spend their time at ease at first. Then comes the warning that everyone should go home in pairs, and then suddenly, the story kicks off with murder because it is not known who or what committed the crime that requires a detour. It’s why the protagonist and his team end up in Da’at, formerly known as Tokyo, but one person is missing from our cast. Angels, always here to cause problems…

A metallic-faced, angelic-looking figure kidnaps the missing member. Our hero is merged with the not-so-pleasant Aogami, creating a non-human-non-demon character named Nahobino thanks to the blue-haired figure, but, in return, we have a better than zero chance of survival. Yes, but the Japanese capital is still in bad shape, and we need to find out what caused it. In the meantime, thousands of Abscesses (no, not the one you pop on your body…) have to be removed, and there’s the helpful but suspicious Sophia. These two paragraphs deliver what you’d expect from Shin Megami Tensei, but the big difference is in the death of the god of the world; the world is out of balance, and we have to gather the pieces of his power. In the meantime, we have to make a lot of sacrifices. It won’t be as horror-style as the previous episodes (like Shin Megami Tensei 3: Nocturne), but it will challenge the definition of “there are real differences between gods and monsters”.

The game runs on the well-used (and perhaps abused) donkey, more commonly known as the Unreal Engine 4, which has brought some positives, as Shin Megami Tensei V is prettier and more extensive than previous instalments. The cosmic sci-fi suits it well. Perhaps it’s not an exaggeration to say: it’s scary, as we roam around in a ruined city to collect items from machines that resemble vending machines, and the demonic soundtrack doesn’t fail to set the mood. The music is suitably good sounding, too, because it’s been made hair-raising (in a good way, of course). However, the voice acting is weird here and there; I think they missed the right notes in some places… The combat kept the style of the previous episodes (turn-based; the emphasis is on elemental weaknesses, and you gain extra turns if you use the correct weakness; in return, the AI gets the same opportunity). This time, we fight the demons in the same place where we ran into them. It all feels otherworldly because, in contrast to the opponents, Nahobino is more like the masquerade of the heroes in the Saban adaptation (or localization) of the Power Rangers that used to run on Fox Kids now defunct for over a decade. And given the Nintendo Switch, it doesn’t seem like a big surprise that The Legend of Zelda: Breath of the Wild made an impact on Shin Megami Tensei V, as Nabohino can jump, climb, and dash, so it could also feel like a more open-world, exploration-based game from Atlus (also in the way that there are NPCs to talk to, plus you can also complete quests for demons that aren’t antagonistic towards us). However, I think the problem is that you can’t notice at first what you can and can’t use with these moves, for example. Remember your route, too: getting lost is easy.

Never be careless in the middle of a fight because the game shows no mercy, as even a single mistake can result in a game over. For this reason, the tense atmosphere that is so characteristic of the game is also felt here, and we must summon the demons ourselves if we put them on our side. But don’t forget too much about what you’re playing, as Shin Megami Tensei V requires the same hardcore grind as previous games in the series while also allowing you to upgrade your combat skills with consumable Essences and Miracles via the Glory currency. Demon Fusion isn’t left out either, but there are now four types (dyad, reverse, reverse compendium and special), and no joke, but these should be deployed as soon as possible during the first few hours.

Easy to get lost in it

The only reason Shin Megami Tensei V doesn’t get a nine is that it’s probably easy to get lost in. For that, it gets a strong eight and a half out of ten, but it could have easily been better. And for those who might play it elsewhere, I think SEGA will be porting it to other platforms soon, but until then, it’s one of the Nintendo Switch’s best RPGs. It’s intense, moody, and there’s Safety difficulty for those who only care about the story. So it’s a good game, now please, turn this thing off.

It's different, but not that much