In terms of content, however, the situation is quite different: the first chapter of the series boasted a much more substantial and varied campaign, especially since the Remastered version included three DLCs, whereas the new Spider-Man adventure is almost an expansion, with seven hours and a little more until the end, and a much smaller number of side missions.

In any case, despite its brevity, it’s still an extremely enjoyable experience, with various new gameplay features, a compelling and sometimes touching story, and a more mature art style: elements that make Miles Morales a must-have for anyone who enjoyed Marvel’s Spider-Man.

Then comes the question you all ask yourselves: how does the conversion of the game made by Nixxes for the Windows platform compare to the work done for the first chapter? Get your costume on, load up your webbing, and while you’re at it, put on a hat and scarf because it’s cold outside: here’s our review of Marvel’s Spider-Man: Miles Morales for PC. 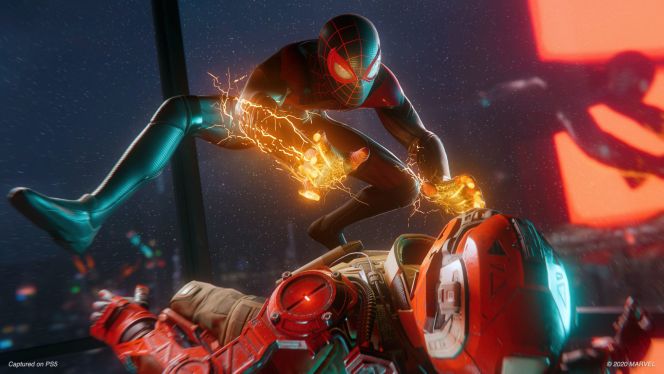 Born in the pages of the Ultimate Fallout miniseries after the death of Peter Parker in Earth-1610, in the Ultimate Universe created by Brian Michael Bendis, Warren Ellis, and Mark Millar in 2000, Miles Morales boasts a significantly different origin story in Insomniac games, fitting perfectly into the gaming universe we discussed in our review of Marvel’s Spider-Man.

After gaining the same powers as Spider-Man at the end of the first game in the series, Miles tells his friend Peter what happened to him. The latter reveals the truth, gives him a costume and agrees to “train” him to be like the guardian of New York and especially Harlem, the neighborhood where he lives with his mother after the tragic death of his father.

The path that the young protagonist finds himself on in Marvel’s Spider-Man: Miles Morales campaign is thus the path that leads him to become a hero, but above all to emancipate himself and gain his own identity in the eyes of the townspeople, who have always seen him as the “real” Spider-Man’s sidekick and a discreet troublemaker: a concept that is repeated in the early scenes of Marvel’s Spider-Man: Miles Morales.

So the story focuses specifically on this theme, and allows itself very few detours, but the central characters in the story undergo great character development, and we can expect some very spectacular scenes that are once again impeccable, in some cases paying a clear homage to the cinematic Spider-Man. 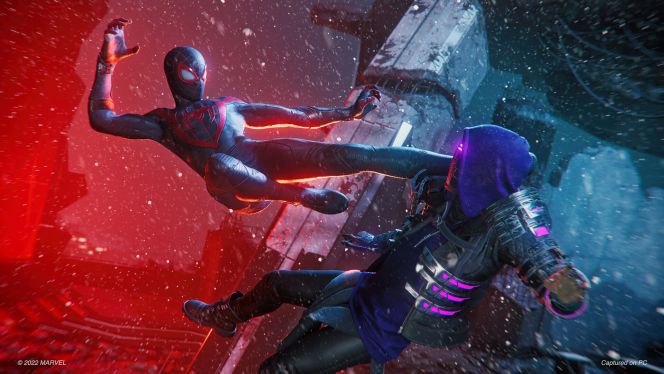 An ordinary guy who becomes a superhero

Miles is an ordinary boy who is immediately sympathetic, and it has to be said that the authors have done a very good job of spicing up his story with details that can give the protagonist human depth. True: some narrative solutions feel like phone calls and lack real twists, as the number of villains is significantly reduced compared to the aforementioned Marvel Spider-Man.

In its own small way, let’s put it that way, the game nevertheless proves to be highly enjoyable, and even cleverly covers the limitations of the traditional-style open world structure, also and above all thanks to the idea that side-activities are mostly optional, allowing you to try your hand at one main task and another, as they don’t shine in terms of variety and complexity. 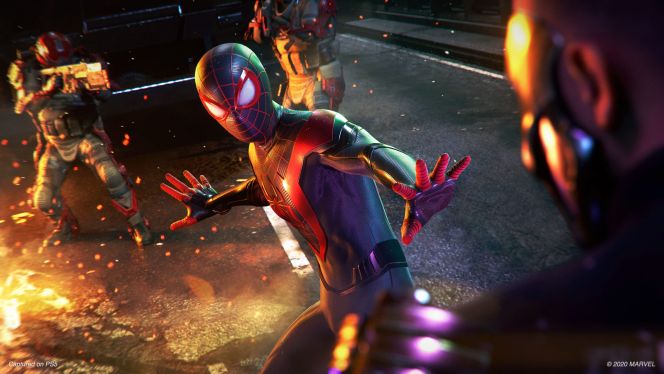 Gameplay: like Spider-Man, some things are better, some less so

Miles is endowed with the same abilities as Spider-Man. Still, with something more: during the initial sequences of the campaign, he discovers that he can emit devastating bioelectric discharges (abilities that the developers have also ingeniously used to set up neat environmental puzzles here and there), as well as the ability to blend in by literally becoming invisible, albeit for a limited time.

The free-flowing combat system has been optimized even further, with fewer misses, empty shots and a better-established combat rhythm. As a result, the clashes in the field of play are even more frenetic and entertaining battles. in which you strategically ration your special moves to concentrate them on your most dangerous and difficult opponents.

In this respect, the sequel is less rich: the various criminal gangs of New York are basically replaced by three categories of opponents, in this case, street criminals, mercenaries in the Roxxon payroll, and members of the Underground, although there is more variety in terms of types, equipment, and skills.

Unfortunately, there’s not much new and different on the boss fight front in Marvel’s Spider-Man: Miles Morales, not least because the campaign only has three (two and a half, actually) villains to fight. On the other hand, the developers have further improved the swinging of the web and our ability to move around Manhattan in general, greatly reducing the situations where the character resorts to running into a vertical wall, but speeding up the swinging of the web thanks to an additional air launch.

The protagonist also boasts all-new animations compared to Peter’s movement, which is evident when he’s swinging from one building to another or fighting. Miles always seems to be in balance, even though he starts out as a clumsy and uncoordinated guy, but is ‘saved’ by the abilities he has been given, which give him, among other things, superhuman reflexes and preparedness. 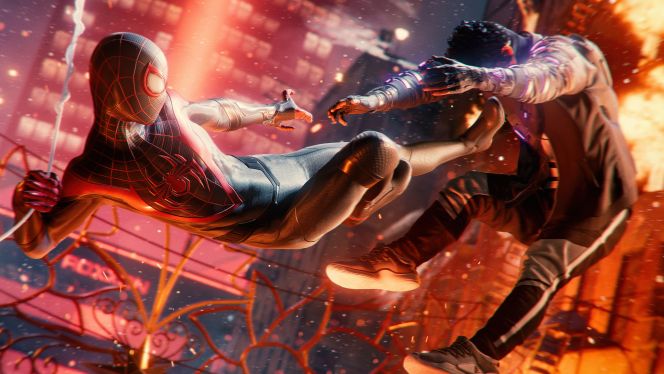 Differences in the PC version

This brings us to the PC version, the subject of this review. What has changed in Miles Morales compared to the previous game? As expected, very little. The graphics settings are the same as in the previous episode, and unfortunately, this time, there is no percentage scaling of the resolution and no internal benchmark to check performance. The impact of the upscaling technologies is very limited, with DLSS, FSR, XeSS, and IGTI only slightly improving performance, although, in theory, the effective resolution is significantly reduced. We also find the possibility of dynamic resolution with the fps target, which is aggressive and greatly reduces overall quality.

Ray tracing is a big issue, we said: if you avoid activating it, Marvel’s Spider-Man: Miles Morales can run at an average of 50 fps on an RTX 3070 at true 4K, without upscaling technologies and with all settings at maximum. From there, it’s just a bit of fiddling to get the game to run at 60 fps in all situations, even the most congested and busy ones. Again, it’s a shame that this can’t be done with a simple percentage scaling like the one we wrote about in our Uncharted Legacy of Thieves review.

Activating ray tracing instead of maximum settings and 4K will result in a pretty serious performance drop, which can reduce frame rates by up to 10 fps. The game also tends to change gradually rather than immediately, which causes a lot of difficulties when trying to find the best compromise between detail and smoothness. In our case, however, we managed to achieve a relatively stable 60 frames by lowering the resolution to 1440p and using the Max preset (which would be “high”) for both the general settings and ray tracing, but also keeping DLSS at “quality”.

Look at this! Here comes another Spider-Man!

Marvel’s Spider-Man: Miles Morales is an immersive, spectacular sequel with some important gameplay improvements: and a must-have for those who enjoyed the first episode of the Insomniac Games’ series, although it is much poorer in content (via DLC) than the base Marvel’s Spider-Man Remastered, and the sale price is a no better reflection of this. Again, the PC conversion is solid but in some ways, inconsistent. There are plenty of options, but scalability means that some important options are missing, so ultimately a top configuration is needed to really maximize the experience.

– You need a very powerful PC to get the most out of it
– Little content compared to Marvel’s Spider-Man Remastered
– Forgettable side activities, extremely simplified boss fights

Marvel's Spider-Man: Miles Morales is an immersive, spectacular sequel with some important gameplay improvements: and a must-have for those who enjoyed the first episode of the Insomniac Games' series, although it is much poorer in content (via DLC) than the base Marvel's Spider-Man Remastered, and the sale price is a no better reflection of this. Again, the PC conversion is solid but in some ways, inconsistent. There are plenty of options, but scalability means that some important options are missing, so ultimately a top configuration is needed to really maximize the experience.