REVIEW – Daniel Vávra has done it again. The Czech gentleman formerly worked on the first two Mafia titles, and while he required Kickstarter funding for the development, we can say about Kingdom Come that despite its problems, it is one of the most pleasant surprises of this year so far.

We’re in the Kingdom of Bohemia (mostly the present-day Czech Republic), in the early 15th century. Sigismund, the Holy Roman Emperor (who also ruled the Kingdoms of Hungary and Croatia as well!) orders the Cumans to run over Skalitz due to its silver (no wonder why the German name for this place is Silberskalitz…). This is where we get into the picture: we are Henry, son of a blacksmith. Our family is killed, and we join a resistance group to make Wenceslaus IV, Sigismund’s half-brother, the king. However, until we get to that point, we’ll have to go through some shit, and I do mean it in the literal sense this time.

What a crappy start!

Kingdom Come: Deliverance has a slow start, and you’ll do some minuscule, minor tasks, such as throwing excrement at a wall, and I wish I were not joking. The game opens itself slowly, but when you get to see it in its full glory, Warhorse Studios’ game will open up for you. The Czech developers tried their best to recreate the (to them, local) region in the most realistic way possible.

The game provides a legitimate, period-accurate look into the life of many with more than the shiny castles to the eye; the characters wear appropriate clothing and armor, and it all happens in an RPG where you might not be capable of taking a break from it that easily… 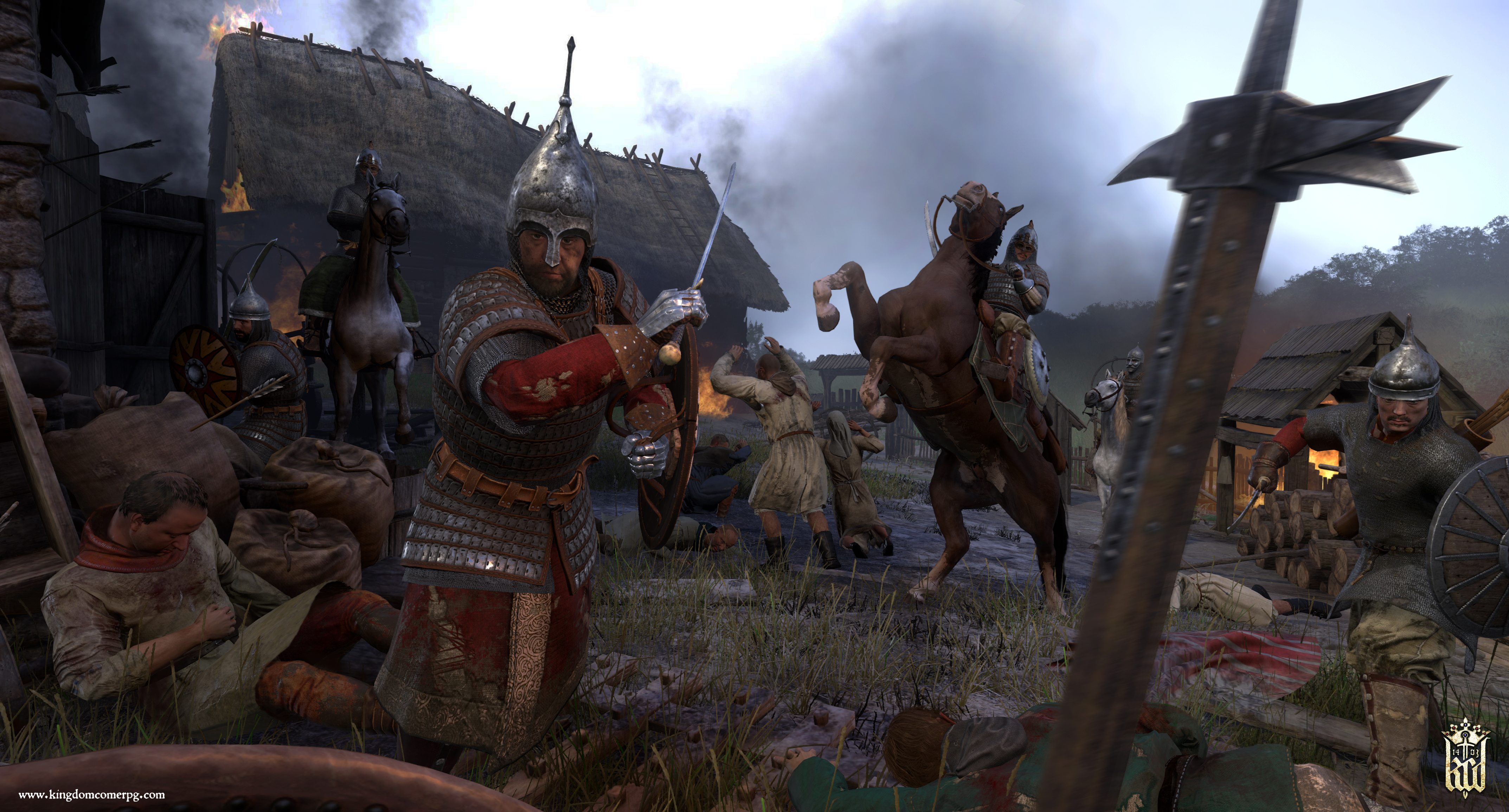 Still… the feeling is far from perfect. I was talking with our editor-in-chief regarding the game, and one thought popped up. KC:D lacks a third-person perspective view. Indeed, you’ll have to live through the nights and days via Henry’s eyes, which makes the comparison with The Elder Scrolls reasonable, although you won’t have mana and fireball spells in this game. Back to the gameplay, you’ll have to learn the distance between you and your enemy in the swordfights, because timing alone won’t help you survive.

Back in the 15th century, reputation was also playing a role – if you were caught stealing something in a village, you wouldn’t be able to talk to royal people, and the same happens if you are neck deep in blood after a few sword-swinging incidents. I just remembered something that the developers will likely fix: before a few conversations, I had to wait several seconds to trigger the cutscene. (And from what I heard on PC, it could take as much as several MINUTES!!!) I understand that we are talking about a small team with a big game, but Deep Silver, or pardon me, THQ Nordic (who happened to buy Deep Silver and Koch Media ONE day after the game’s release), should have waited until early March to iron out such issues. The launch day had us install a 21-gigabyte patch, and there’s another roughly 15 gig update on the way, and the developers promised another major update for KC:D for early March or so. The game is buggy, and it’s said mildly, and I didn’t even mention that you can simply use an exploit to level up easily even on consoles (!!!) – however, I will not link this video. Instead, I’m embedding another bug video.

CryEngine 3 provides a mixed look. While the game’s world is created excellently, the characters look somewhat terrible, and their voice quality in the dialogues are also hovering from good to terrible. What about the soundtrack? They sound decent, but there’s not much to hear, unfortunately…

I didn’t mention the noticeable invisible walls, as well as the saving system. (I’m going to say this upfront: this thought does not affect my rating.) You can save by drinking schnapps, but if you drink too much, you will become addicted, and the drinks cost quite a lot, so you’re going to be limited in saving, unless you play on PC, because there’s already a mod, lol.

While it might sound that I’m bashing the game left and right, I have to say that it has some very good points, too. For example, Skalitz is designed and created wonderfully, and I think the whole Kingdom of Bohemia feels lively. The story is unique, except for its ending, but we already know that Warhorse is going to make DLC for the game (and probably a sequel, too) – I don’t remember any RPGs that was set in this time AND location. However, I need to mention some technicalities. The ordinary PlayStation 4 and Xbox One runs Kingdom Come: Deliverance at 900p resolution and both the PlayStation 4 Pro and the Xbox One X is limited to 1440p, but 1080p seems to be more common. The initial loading time is also horrible.

Microsoft’s consoles are faster than Sony’s – on a PS4 Pro, expect a roughly 1.5-minute wait, and if you have a regular PS4, it’s going to be almost TWO minutes. The frame rate is also problematic: a regular PlayStation 4 mostly hovers in the 20-25 FPS territory (and in cutscenes, it can go as low as 20…), and even the PlayStation 4 Pro doesn’t hold a constant thirty frames per second. The experience isn’t the best.

I’ll preface this by saying that if Kingdom Come: Deliverance gets rid of the bugs and improves its performance, it’ll jump up by 0.5 points on a 1-10 scale. The reason why I gave the game 79% is that CURRENTLY, the game is not GREAT – the bugs and the low performance somewhat ruin the gameplay. By the time March rolls around, you can look at the rating as 84% – I didn’t bring up the technicalities as a negative for this reason. If you like RPGs and are bored with The Witcher and Skyrim, get it.

– Why isn’t there a third-person perspective?
– The way it starts is slow
– The characters look awful

REVIEW - Daniel Vávra has done it again. The Czech gentleman formerly worked on the first two Mafia titles, and while he required Kickstarter funding for the development, we can say about Kingdom Come that despite its problems, it is one of the most pleasant surprises of this year so far.   We're in the Kingdom of Bohemia (mostly the present-day Czech Republic), in the early 15th century. Sigismund, the Holy Roman Emperor (who also ruled the Kingdoms of Hungary and Croatia as well!) orders the Cumans to run over Skalitz due to its silver (no wonder why the German…
Kingdom Come: Deliverance – Medieval Meddling
Kingdom Come: Deliverance – Medieval Meddling
V
Worth the wait.