REVIEW – Mortal Kombat 11 is the brand new entry to the long-running franchise, and probably one of the bloodiest entries of all time. It holds nothing back from the players, and from the overprotective parents. Four years after the last Mortal Kombat game we are back to fight once again and protect Earthrealm, and this time it seems that even Raiden is going full mental. Plus we get a brand new villain for the franchise, and of course, a couple of fan favourite characters return. The Krypt gets a redesign, a new combat system and we get some pretty weird loot box economy.

Mortal Kombat 11 starts off where Mortal Kombat X ended, Raiden became fed up with Earthrealm being constantly invaded by Outworld and Netherrealm is now taking a more proactive approach. Killing all enemies of Earthrealm rather than waiting for some tournament. He throws Shinok in front of Netherrealm’s rulers to make them back off, and all seems to be well as Raiden now has glowy red eyes. However, because of all the mucking about with the timelines, Raiden gets the attention of Kronika, the goddess of time. In order to correct the timelines, she decides to erase Raiden from the timelines. In order for her to do this, she mixes up the present with warriors of the past and tries to cause a bit of havoc before she can complete her plan. 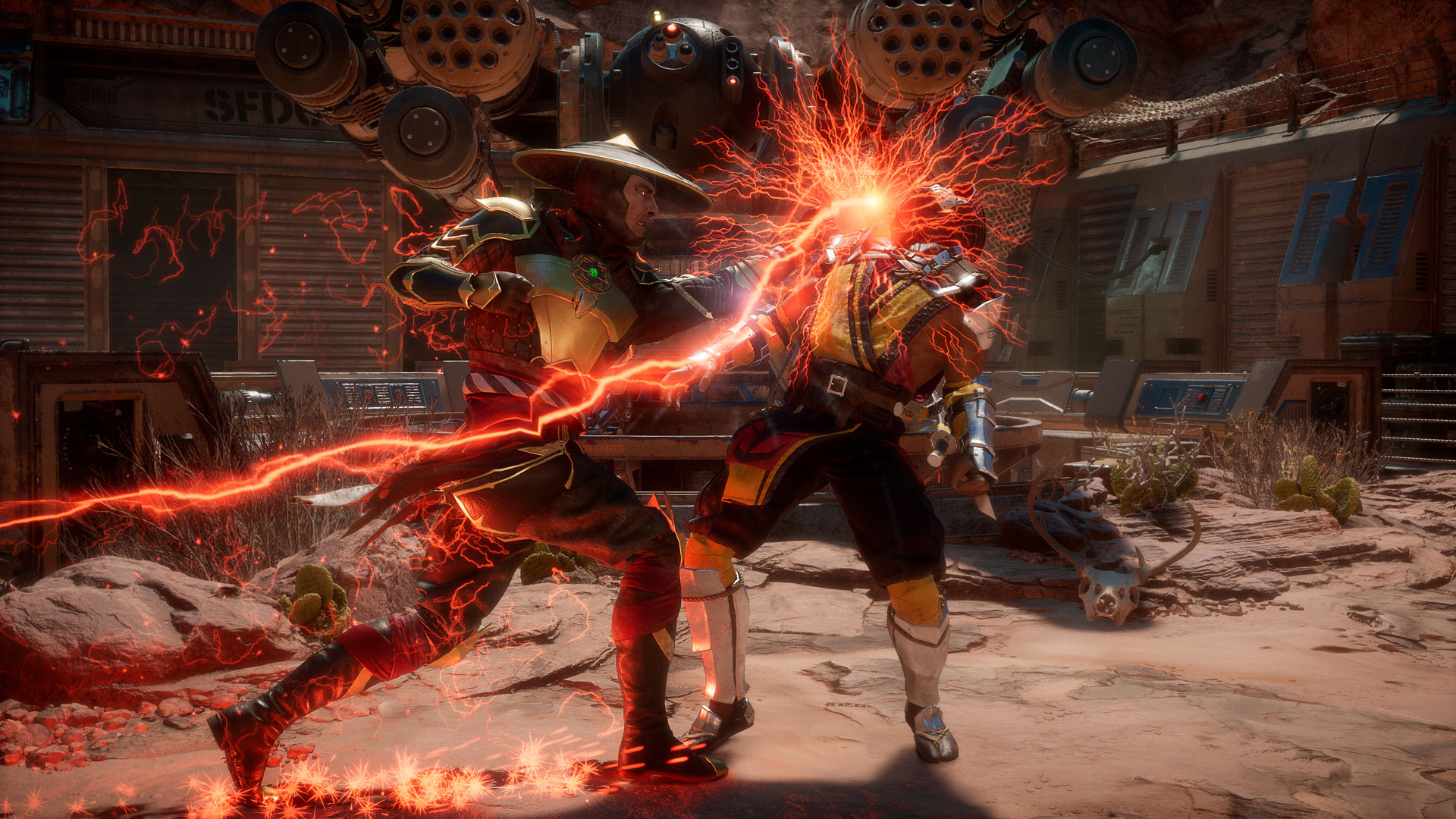 The story is told in a much more structured way compared to Mortal Kombat X, and the new characters are likeable. It is a lot less dark themed and is able to be light-hearted when it needs to be, as much as a fighting game full of brutalities can be. The voice cast does a great job in their respective roles, and for the Krypt and the upcoming DLC, we even get Shang Tsung voiced by the original Mortal Kombat 1 movie actor Cary-Hiroyuki Tagawa. Plus we get another famous celebrity doing the voice for Sonya Blade, UFC fighter Ronda Rousey who… actually is really horrible as a voice actor for Sonya Blade, and I have no idea why they would replace Tricia Helfer of Battlestar Galactica fame and actual voice actor with a deadpan voice. Sure she’s famous plus great for marketing, but her acting is horrible and has some personal baggage that tainted the reputation of the game.

There are a total of twelve chapters and in each chapter, roughly four fights to complete, and some have the option to select a character before starting. It takes about three to four hours to complete the story mode, and there is a tiny bit of replayability if you decide to go through some events where a character switch is available for a scene. It is a fun story to playthrough and I cannot wait what they do with a potential sequel, but I do hope they refrain from using Ronda again. 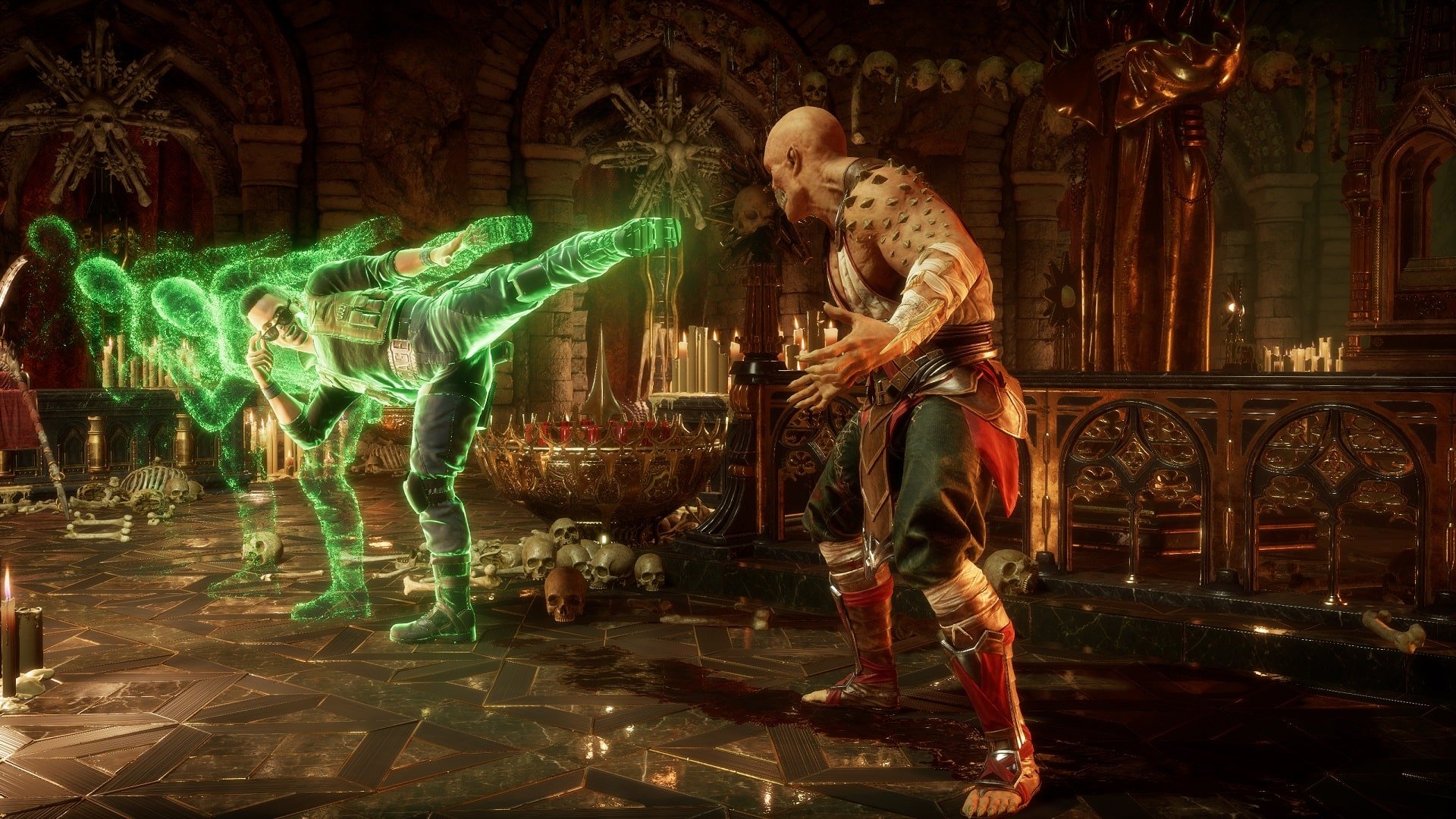 Once you complete the story mode for the game there are plenty of other modes to sink your teeth into. There are a total of twenty-five characters to master in different modes, plus more will be coming with Kombat Pack DLC. Three characters out of the twenty-five are brand new. We got Geras a construct of Kronika who has time-based abilities, Cetrion and here the player finally gets to play as an Elder God, and finally the Kollector a six-armed enforcer with magic attacks. Shao Khan is also in the roster, but if you did not pre-order, you will have to spend extra money on it, which is a shame cause he is not even available in the Premium Edition. There will be six initial DLC characters provided if you have the Kombat Pack, and there is the Klassic Towers aka the arcade mode, where you battle against enemies in a set order, and there is even an Endless Tower mode.

This part is fine, but the new Towers which are called Towers of Time are just pure annoyance, and at the time of writing, nearly a week after release the concept is still not as fun as it should be. The player gets to go and try their chances against different characters, and modifiers. The problem with these modifiers is that they are just not fun, overtly difficult, and the enemy AI has so much health that I ignored most of this content for a while. Up until the 2nd of May 2019, it was a pain to play, and even with the recent patch released, I’m not sure if it is fully worth sinking so much time into the Towers of Time mode. It is more manageable, but it is disappointing especially compared to the old MK9 and MKX towers where the modifiers were actually fun to play, and in some cases were wacky fun modes. Here it just all serves for the grind, which in the first week was unbearable. Also compared to most videogames where there is one normal currency, and one premium to unlock things for money.

Here in Mortal Kombat 11, there are three different types of currencies, and you cannot use them to unlock everything in the shop. Instead, the shop is rotation based, and everything in the Krypt takes ages to unlock. The developers with the recent patch gave out a huge amount of free currency, but even that does not solve the full issue. It is a shame that an otherwise stellar game with so many modes gets bogged down.

Also, there is a lot of customization for the players, multiple skins, and every item can be augmented (except in rank play). The characters can also be customized in terms of giving them specific special attacks, normal attacks, and unique intros plus victories. The slight issue is that you have to unlock them in the Krypt or the Towers of Times mostly so once again these are locked behind grind.

Still, even with the grind, the combat is simply pure fun to handle. The controls are tight, and every character has unique move sets. There is a robust tutorial system so anyone who feels they are not good at fighting games can simply start with the tutorials. They explain the basics such as blocking, dashing, cancelling, and special moves. There are also character specific tutorials, and advanced tutorials so that one can hone their skills before going to the online modes. Online has the usual ranked and unranked mode, king of the hill, AI battles, and 1v1.

The graphics in Mortal Kombat 11 is great, but it still runs under Unreal Engine 3 and it shows at this point in certain sections of the game. Character models and animation are great, but it feels a bit choppy. Also on a weird note that the cinematics tries to match the engine gameplay like for like, but there are some noticeable issues like hair and lighting, where in-game it looks a bit off. Hopefully, for next-gen consoles, we get an MK or Injustice with Unreal Engine 4 otherwise this is going to look outdated in the long run. The sound design though is magnificent, every punch, kick, and crunching noise as bones shatter is done in a great way, and is a marvel to listen to the fights. Especially on a home theatre setup. The music is also superb and fits with fights, and with the menu music.

Still, though it is a bit, hard to recommend Mortal Kombat 11 currently. It is a great game, but the issues surrounding it with its Towers of Time, and all the grind. As most of the fun items you might want will take a lot of time (heh) to unlock. In the end, the story mode, the Klassic Towers, and the online battle will give you hours of fun, and maybe down the line, the Towers of Time will also be fun one day…. Maybe in a Mortal Kombat 11 XL version?

– Too much grind, diluting the experience
– Graphics are starting to look outdated
– Story mode could have been longer

REVIEW – Mortal Kombat 11 is the brand new entry to the long-running franchise, and probably one of the bloodiest entries of all time. It holds nothing back from the players, and from the overprotective parents. Four years after the last Mortal Kombat game we are back to fight once again and protect Earthrealm, and this time it seems that even Raiden is going full mental. Plus we get a brand new villain for the franchise, and of course, a couple of fan favourite characters return. The Krypt gets a redesign, a new combat system and we get some pretty…
Mortal Kombat 11- We’re in the Endgame Now
Mortal Kombat 11- We’re in the Endgame Now
Dante
It is a fun game, but it is mired in controversy with all the microtransactions, and grind.

It is a fun game, but it is mired in controversy with all the microtransactions, and grind.