REVIEW – I’ve had just about enough of the MXGP series’ lack of progression by now. If the franchise adds functions that were already used this year in the Monster Energy Supercross series, then I can safely say that there’s not much of a progression forward. And the term clinical death can be applied to the aesthetics as well in this case.

Once again, I’m writing about a Milestone game before its release (oh, the beauty of review embargos…)… So the Italian developers push three licenses in front of them recently: the American supercross (Monster Energy Supercross), the Grand Prix motorcycle racing (MotoGP), and the motocross world championship (MXGP). In my opinion, the third one has improved the least. 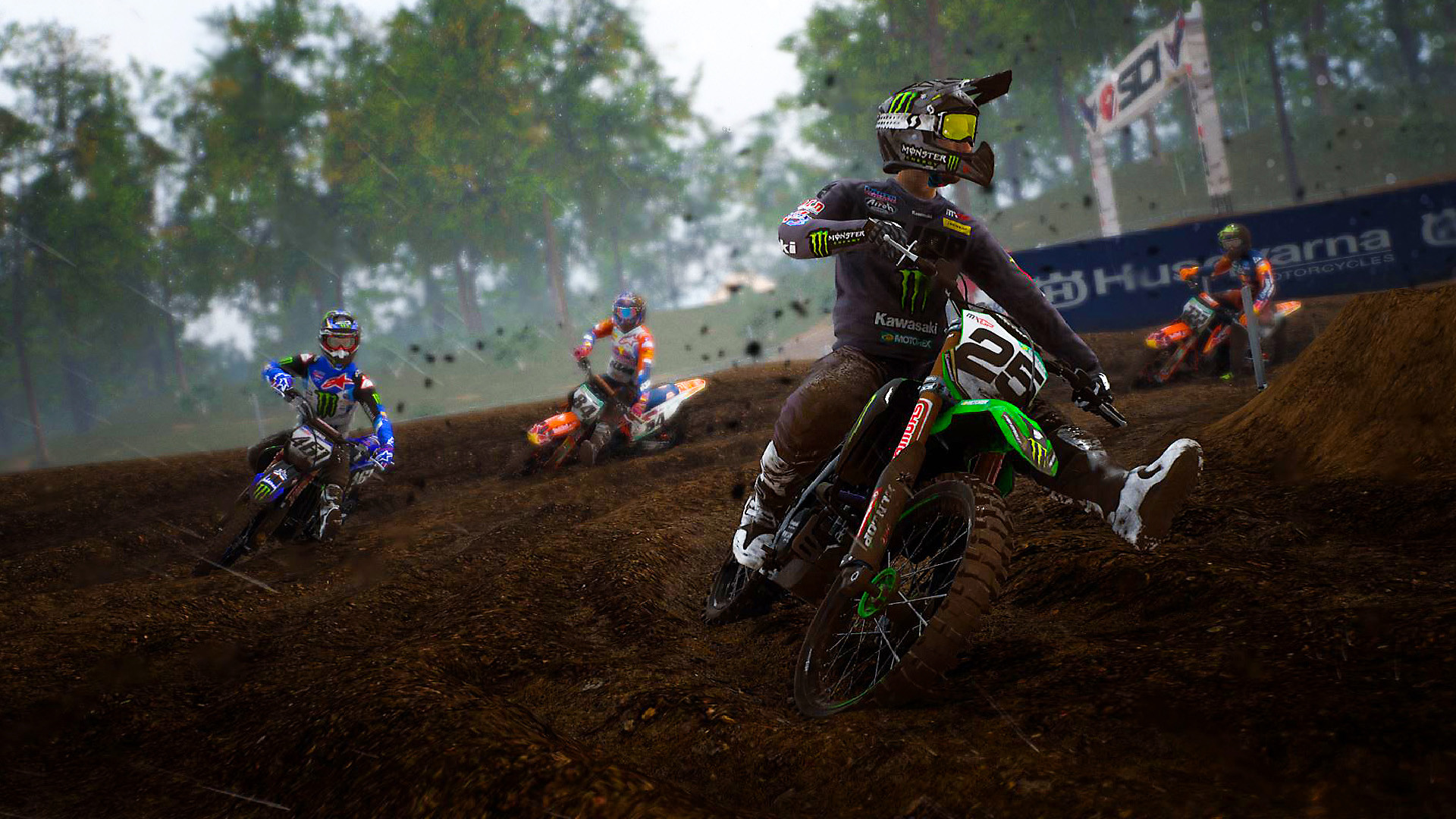 MXGP 2019 starts by making you create your custom rider. Of course, once again, you have to iterate with presets, so I’ll just copy in my note on this, as I mostly wrote notes about my experiences: 12 heads, 9 eye colours, 10 hair types, 9 beard types, all with 10 colours. Then, you can choose a brand, and then, you can either choose to join a team or to pick a sponsor. I picked the latter because I wanted to see how much you can customize the bike.

You can do so quite heavily – it’s about on RIDE 3’s level, but there are fewer items to modify here. With the performance improving things, you can improve your braking power, handling, acceleration, and top speed. You get credits by passing your sponsor’s expectations, and by levelling up, you can pick better ones that demand more but pay you better as well. Levelling up is another common thing with Milestone’s games that I don’t even have to explain it by now. There’s EXP and there’s prestige as well – the more you have, the better teams and sponsors’ attention you can get. With the credits, you can also change your rider’s outfit as well, but it’s been a common thing in Milestone titles as well. 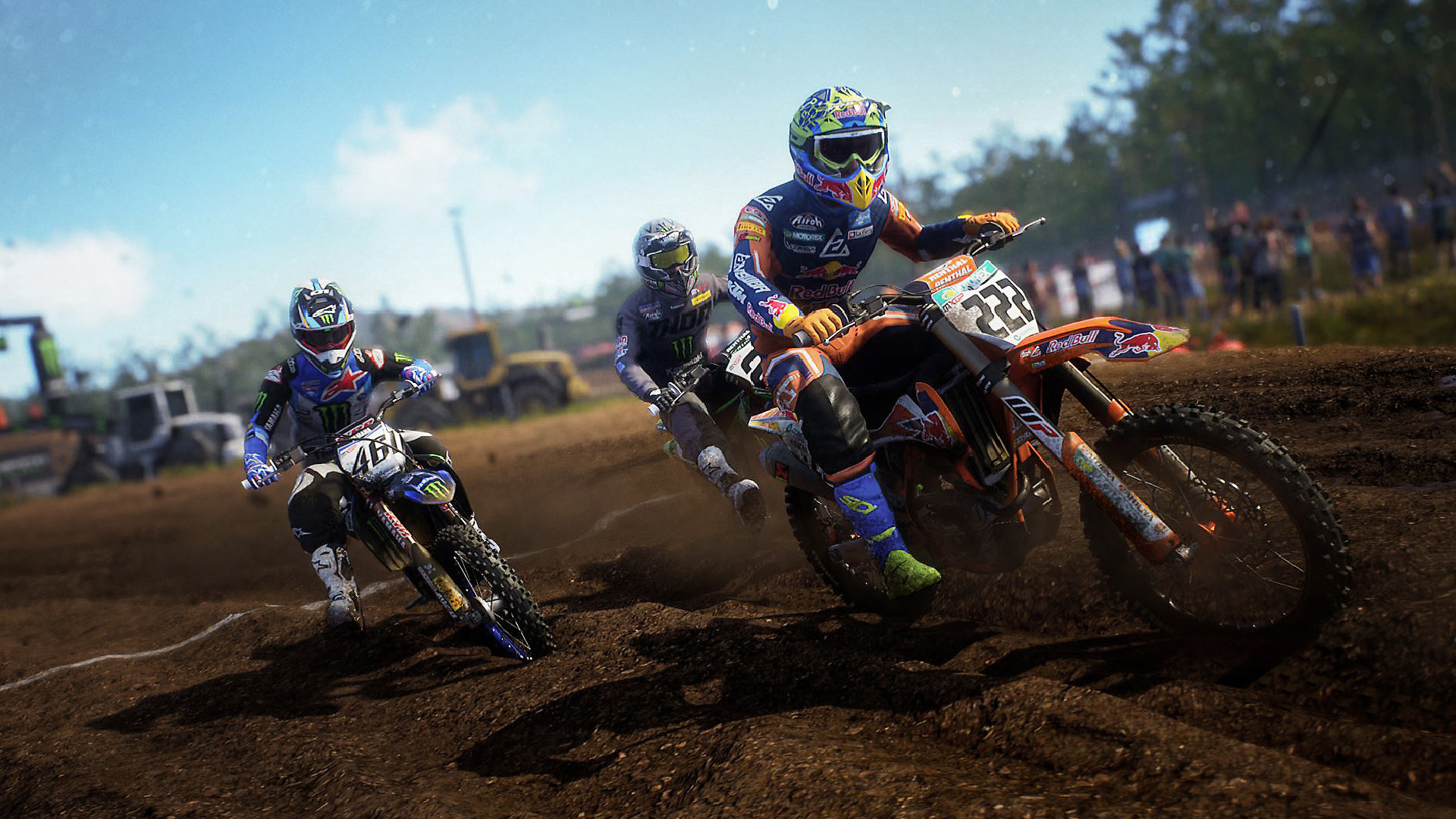 After changing to Unreal Engine 4, there’s no excuse, I have to say that even though the visuals have improved a bit, I wouldn’t call MXGP 2019 outstanding looking. (It’s not good, but not that bad either. I think F1 2019 looked better.) The audio didn’t seem to have improved that much – it feels just as average as it was a year ago. The soundtrack… well, I don’t like it, even though I listen to and create electronic music myself. It tries to be trendy, but I didn’t get into the soundtrack. So the audiovisuals didn’t seem to have gotten off the ground, which seems to be a common thing in annual licensed games. Okay, but what about the physics? There seems to be a bit of improvement here, so if you get off the line that others have already created on the track, then your handling will be slightly more difficult, so it’s not the best idea to be extremely unique with your racing lines. You also have to learn your jumps rhythm, and the scrub also has to be taken into notice – this jumping technique can shave a few tenths off your lap time. You can’t just easily go through everything on full acceleration – maybe you can on two of the five difficulty levels (there is no percentage here, sadly…) to win the races. All 17 tracks and both categories are present in the game, as expected.

MXGP got a new addition taken over from Monster Energy Supercross 2. The Playground, your free-roam area, allows you to create checkpoint races (Waypoint), and you can also create maps on your own (Level Editor). You can do more than that (checkpoint racing – Gotta Go Faster, item collecting – Catch’em All, going through a narrow line for points – Ace in the Hole, and the combination of the three – Magnum Opus). It could be interesting in a longer-term, but now, one day before the game’s launch, I can’t judge if it could be a major success. The online works as well, and as always, praises to those who thought it’s a good idea to make multiplayer push-to-talk. 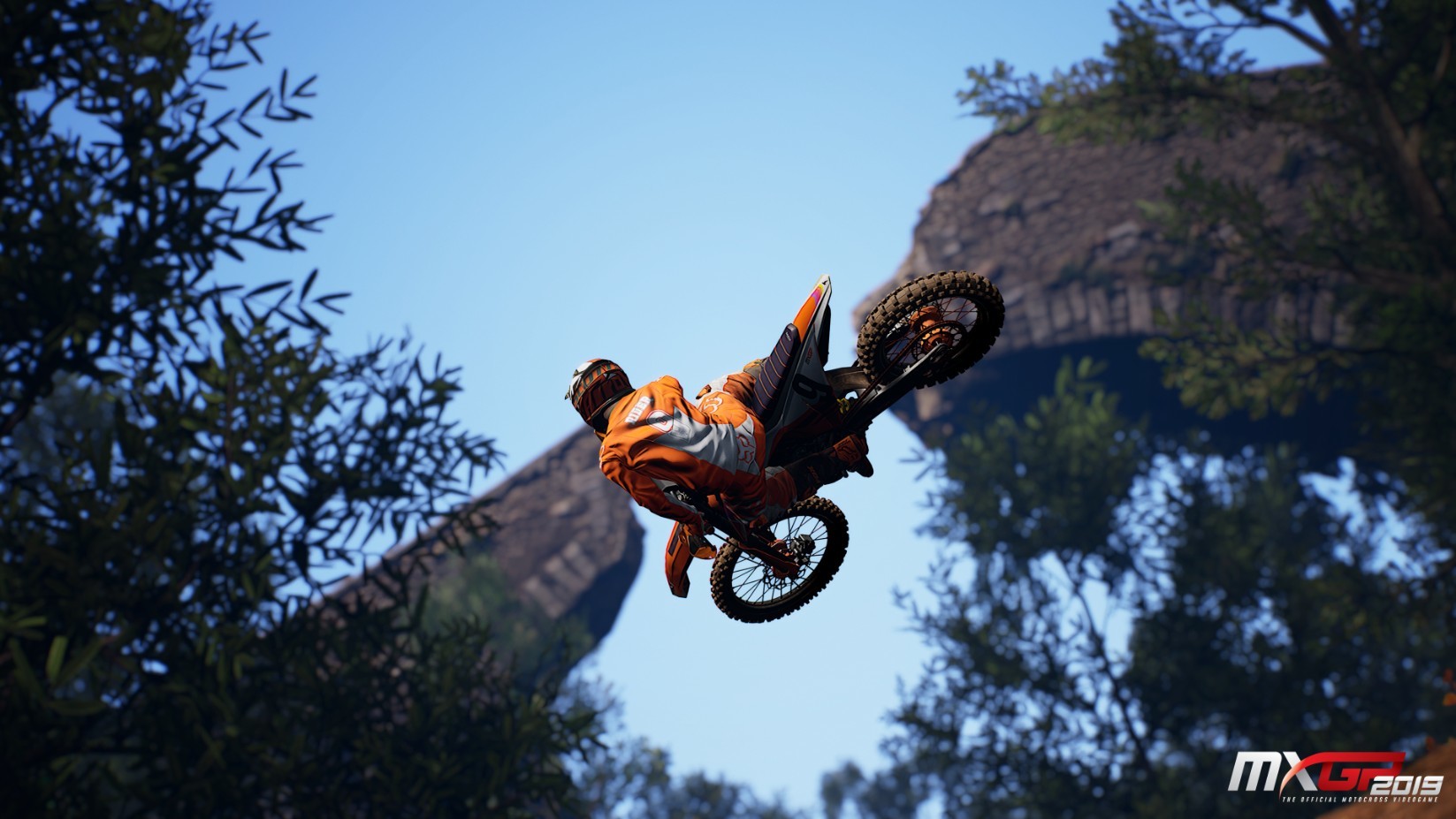 However, I think the game is slightly problematic. This year, it tries to be stylish (Get Dirt, Dude), while almost everything got clinically white and dead. The menus all got this huge lettered thing, which doesn’t make it feel like it’s a 2019 game but something that tries to run on a way too low resolution. The menus don’t look aesthetic. They look quite ugly. This visual style doesn’t look like a step forward from the past. There’s also no percentage setting in the difficulty, so you might find yourself kicked in the ass on hard difficulty, while you have no trouble winning on normal – it’s not a good thing to see especially after what MotoGP 19 already showed this year. Then, several times, I might have taken the start way too well, because when I took the holeshots in the first place, the game wrote INVALID. That’s kind. I have messed up my braking point (you can rewind in case that happens), so I got off track, and the game counts down the time I can still spend outside the circuit. Suddenly, I got respawned to the track (no animation once again, you still can’t run to your bike and get on it…), with the message at the top saying Obstacle avoided. So they thought I was about to run into something trackside. This is their new idea.

If I cut the track, then it said Cut track, which makes sense. I ran into something, only to hear some ridiculously sounding low bump noise. And that’s the only noise you hear if you crash into a trackside object. The ragdoll is still funny, but now, your rider can partially disappear into the mud, wow! There’s no background music during races (perhaps it’s better this way…?), and I’m still not done discussing my experiences. In a racing game, it’s important to know your gap to the rider behind or in front of you, right? Well, MXGP keeps this gap part of the HUD up for a whole two seconds. And, it’s even glitchy most of the time – at the first such point in a race, with me leading it, it said that the second-place rider is four laps behind. What? Sometimes, it just wrote my time and nothing else. It doesn’t work. Also, at the end of a lap, in the top right, it said the best time is 1:45.813, but right under it, it said my time is a 1:45.797!? Even this is broken. Fantastic. The races lack presentation, too. You’d think that at the end of the two heats (the top three scorers get on the podium), you’d get some commentator. Even that is lacking. The animation feels outdated, too – it all feels too minimal.

Monster Energy Supercross 2 got a seven out of ten about half a year ago. However, MXGP 2019 – The Official Motocross Videogame only gets a six and a half out of ten because MES2 had some sort of a style, while this game lacks life, ambience, and it can only be recommended to those who live and breathe MXGP. For them, cranking everything to realistic will be a great time, but for others, it won’t be. I don’t think that the level editor, the Waypoint, and the multiplayer can bring this game around for a year because we can be pretty sure that Milestone will make an MXGP game in 2020 as well. I was considering giving MXGP a 7 out of 10, but due to the aesthetics, it doesn’t deserve a seven. What a shame – the game is good, but it won’t be a mainstream success.

– I don’t think the presentation looks good, and it feels buggy as well
– Not much improvement audiovisually
– Not recommended for beginners (you can’t fine-tune the difficulty level either)

REVIEW - I've had just about enough of the MXGP series' lack of progression by now. If the franchise adds functions that were already used this year in the Monster Energy Supercross series, then I can safely say that there's not much of a progression forward. And the term clinical death can be applied to the aesthetics as well in this case.    Once again, I'm writing about a Milestone game before its release (oh, the beauty of review embargos...)... So the Italian developers push three licenses in front of them recently: the American supercross (Monster Energy Supercross), the Grand…
MXGP 2019 – The Official Motocross Videogame – Clinical Death
MXGP 2019 – The Official Motocross Videogame – Clinical Death
V
A niche game. It fills that niche, though.

A niche game. It fills that niche, though.