REVIEW – Aside from me having to write down one of the longest (and stupidest sounding) video game name just now, the problem is that the sequel of the game adaptation of the American supercross championship is still not that supportive of beginners, and it may be way too green.

Somehow it starts to become a bit of a trend: Milestone game – review code before launch day. This was the case on a Tuesday afternoon, where my sleep was interrupted by the email notification sound coming from speakers cranked to maximum. Unfortunately, the deadline is tight, so this time, I’ll hold my gonzo approach and the length in general back. Let me just repeat that the game is too green.

From tutorial to career

Luckily, we have a situation where the game (whose name I will not write down completely again until the end, so I’ll just say MES2) offers the tutorial right at the start, and you will experience that the gameplay is still extremely difficult for those who are not into motocross in general. The track usage will be shown over time with the tracks showing up in the dirt/mud, and you will have to choose the right line, plus, and this is the most important: you will have to learn to navigate the small hills. You must find your rhythm while positioning your bike and rider right, as it’s not a speedy solution if you jump from a hill to the uphill part of another one. The physics seem alright, but – as I previously said before – you must learn the genre the hard way.

Then, you have the usual character creation with presets, and multiple cosmetic items (glasses, helmets) will cost far more credits than what you have at the start, meaning Milestone is limiting you, which is nothing out of the ordinary from them. 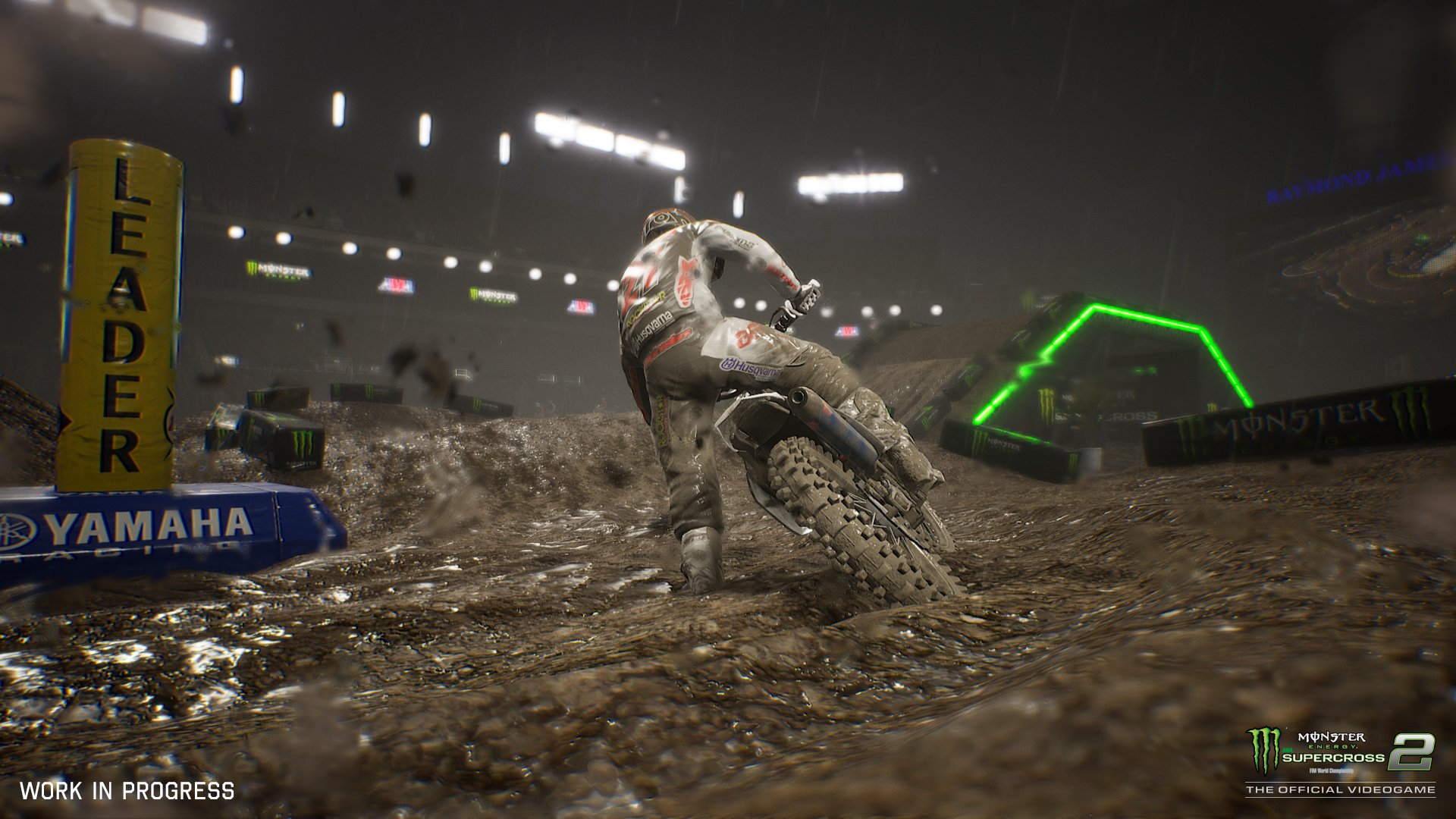 Then, you can choose which championship you want to start your career in (250cc East or West), you can choose your sponsor with their respective expectations and offers (signing bonus, marketing bonus), then you get to deal with your agenda for the week: you can decide what to do the week outside the rest days and the race day.

The training has multiple categories, I’ll list what improves what on your character – landing: the bike will respond faster during jumps; leaning: you can lean faster with your bike; scrub/spending the least time possible in the air to avoid losing speed: you can perform the move faster; reflexes: you can respond faster in case you have an error at the start; cornering speed: bigger braking power. Each training session can be retried only a limited number of times (no rewinding allowed either!), and you can get up to three stars on the three different training levels (basic, intermediate, and professional layout). 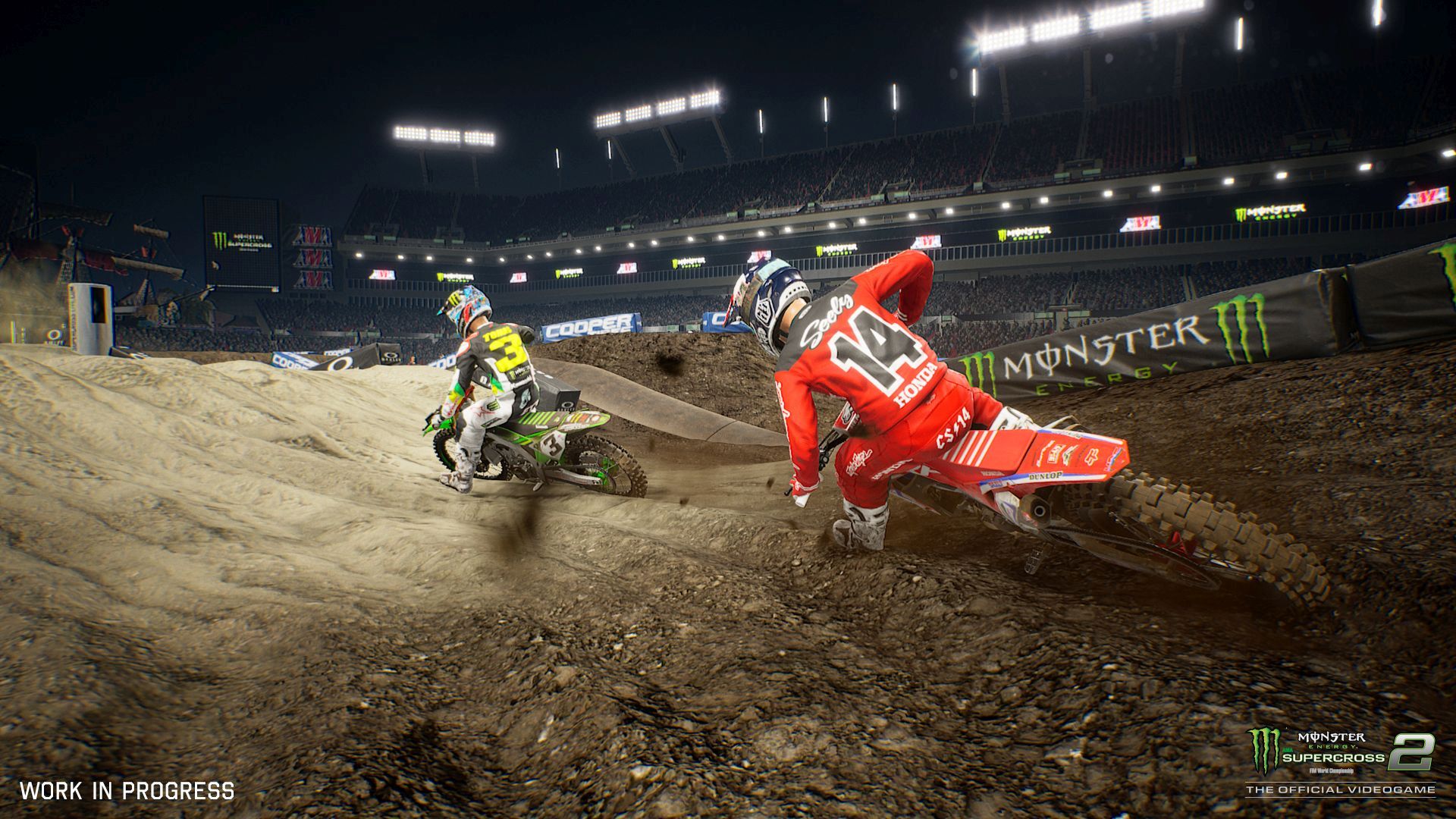 In a challenge, you can either run a 1v1 challenge against another rider (whose face will DEFINITELY look like a plastic piece of liquid cr_p in the menus!), or you will have to beat his time on one of the four compound tracks (I have to quickly mention here that the game is quite harsh in case you take turns too tightly – you get immediately respawned to the track with no three-second countdown like usual), and then there is the promotional and media day. In the first event, you get credits for photos being taken of you, and in the latter, you either get to answer journalists’ questions (unfortunately, Milestone did not take a leaf out of Codemasters’ book – in F1 2018, you get to answer questions after sessions, but here, all you get is a non-interactive cutscene in both promotional and media day events!), and with the fans, you get to dedicate their junk – you get fame for these to be capable of riding in the higher category (450cc), or to get better sponsors.

During the weeks, you can do the Joker events twice I believe (or maybe it gives you double the reward? – it’s not that important, really, I forgot, though). And the career mode is described in a nutshell – at the end of the races, if you finish in the first three, you can do a celebratory move on the bike, and you also get to see a „podium celebration,” but I think it looks nasty.

From single player to track editor

The compound might have green and orange barriers that block you from completely free riding (the green is the compound barrier that you will reach in no time, the orange blocks the compound tracks that require different achievements in the career to be opened), and the time attack speaks for itself (you race against the clock). There are the three official championships, the single event, and that’s all.

Multiplayer, thankfully, has push-to-talk (which Fallout 76 at launch couldn’t implement… just think about that for a second), but it looks very barebones. You either get to join a quick match or you can make a custom match. I’m afraid it will die off fairly quickly. However, the track editor makes a well-appreciated return, and it effectively saves the game from a lower rating: it’s going to be a lifesaver (and life expander)!

The flaws and the rest

Once, the game managed to load the race with my rider laying in the dirt instead of sitting on the bike. I doubt that the alt-tab during the loading screen did that. Even if it was a one-off, I still remember it. In the compound, letting go of the gas once made my rider vibrate in a weird way. The performance of the Unreal Engine 4 is good, but I think the console versions (PlayStation 4, Xbox One, and especially Nintendo Switch) will not have more than thirty frames per second because the engine will have to count the track usage and the lines created by the riders over the race.

Maybe the PlayStation 4 Pro and the Xbox One X will have 60 FPS. The bikes’ sound might be annoying in the long run, but you can listen to some licensed rock/metal music which sounds far better than the cheap rock that Milestone tends to use in other games. If you fall, you still have weird ragdoll animations, followed by an immediate respawn on your bike. (And I don’t think the difficulty levels are fairly set up: no percentage scale here. All you get is very easy, easy, medium, hard, and realistic…)

I love how Milestone already has a Special Edition for Monster Energy Supercross – The Official Videogame 2 on the PlayStation Store for roughly 90 dollars. It has the season pass with 9 DLC, a credit multiplier, two rider customization preset (oh wow! six instead of four!), a dynamic theme on PS4, and three days of early access! (HAH, my review copy was sent on Tuesday, so I got it without a Special Edition nonsense! Obligatory thanks to Magnew for providing the code!). So it’s a bit of money-hungry approach from Milestone. The game gets only a 7/10 because it has the compound. Unlike RIDE 3, MES2 is not addictive. I did go back to play that game for a long time, but here, after the three championships, all you could do is multiplayer and the track editor.

I can’t recommend it for beginners, but the fans of the AMA Supercross series should pick it up (and for them, the game is an 8/10). It’s not bad. but I have seen and played better and more entertaining titles from Milestone. The game is far too green because of the Monster branding, and it will be noticeable during the races. The minimap is too green. A small story at the end: one time, a drunk guy came to me on a playground. He pointed at the grass and asked, IS IT GREEN?

+ Compound and track editor
+ Soundtrack
+ It has no competition

REVIEW - Aside from me having to write down one of the longest (and stupidest sounding) video game name just now, the problem is that the sequel of the game adaptation of the American supercross championship is still not that supportive of beginners, and it may be way too green.   Somehow it starts to become a bit of a trend: Milestone game - review code before launch day. This was the case on a Tuesday afternoon, where my sleep was interrupted by the email notification sound coming from speakers cranked to maximum. Unfortunately, the deadline is tight, so this…
Monster Energy Supercross – The Official Videogame 2 – Mudskating
Monster Energy Supercross – The Official Videogame 2 – Mudskating
V
After the first game, there's not a lot of improvement here...

After the first game, there's not a lot of improvement here...