REVIEW – Ancestors: The Humankind Odyssey is a typical example of the I want too much but I cannot execute its formula. The team and potentially the budget was not satisfactory enough to have Patrice Désilets’ concept on an outstanding quality level.

Ancestors already got the attention (and now I’m saving some characters here, even though it would be beneficial for me to always write the complete name down) by having Assassin’s Creed’s creator behind the project. We haven’t seen much from him in the past nearly seven years, as after leaving Ubisoft, he went to THQ, which quickly ended up going bankrupt.

In Ancestors, you won’t find yourself as a bipedal humanoid creature with high intelligence and the like. We’re going to start at the beginnings of the human race, and, in short, our goal will be to not become extinct – we won’t see just one in-game year or so but far more, given if we eat and drink properly, and sleep enough. What else could be worse than getting eaten by one of the many predators while you are throwing those imaginary Zs as you sleep? Meanwhile – hopefully -, you can improve your neural system, which you can hand down to your heirs and children, as well as your clan that gets to keep your results. Thus, you will eventually end up creating basic weapons (and if you think something with bullets, you took the wrong door, this isn’t the annual Call of Duty), which could be bothered by the fact that your clan could get wiped out, and since I believe the artificial intelligence is problematic, you may see it, and it will be frustrating: unfortunately, it is part of Ancestors’ gameplay, and if you run into it, you’ll have to make your new clan learn your abilities, and there’s also the repetitive experience, during which you will have to iterate and discover, albeit not too much.

In case you haven’t felt it so far, I’ll say it clearly: Ancestors is not easy, and it gets repetitive fairly quickly. I understand Désilets’ concept, and it does have potential, but it feels like a university course where the professor is prepared, but his 90-minute speech doesn’t stay in your head, as your brain blocks out bad memories. And if you felt like me thrashing Ancestors, you are right, but I have some positives to say, too. Learning new abilities, as well as our evolution, is pleasant to see, but you have to get there in the first place, and that will require patience, learning, and complete attention. I might have spent far too much time on it! Oh well, not my problem. Orrorin Tugenensis. 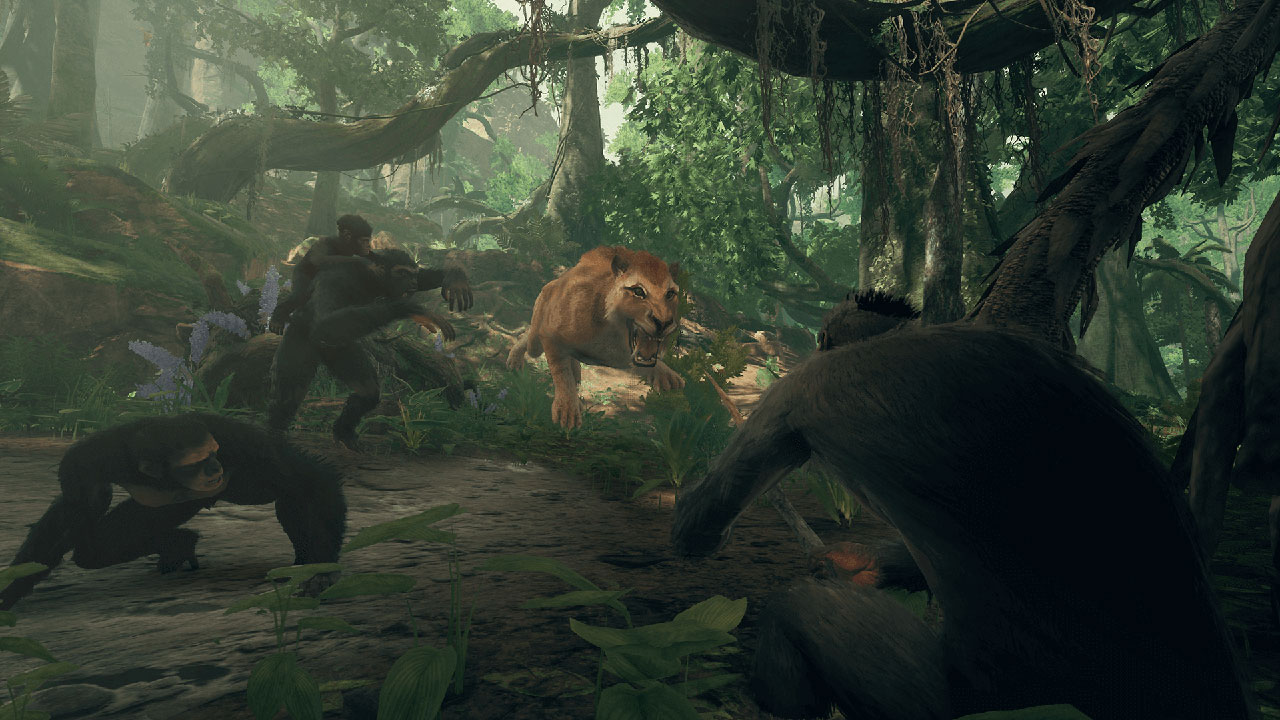 So the gameplay starts quite slowly, and you’ll have to learn everything yourself. Meanwhile, you will notice that the animations are far from being fluid, while the primates look somewhat decent, and this term can be applied to the soundtrack as well, as it seems to be a clever mixture of the classic, orchestral sounds, and some world music. However, it tends to repeat several motives over time, and you will end up hearing the same notes and parts perhaps quite too many times.

And still, I have some thoughts about the gameplay – initially, you will be ridiculously slow, the building itself didn’t feel mandatory, the AI couldn’t be used properly for our tasks, and also, I have a thought that this game wants to be an AAA title in an AA suit. Let me explain: Désilets has ideas (launching Assassin’s Creed is a good example, but there’s also 1666: Amsterdam, which he had to take back from Ubisoft via a lawsuit), but Take-Two’s new, indie publishing arm, Private Division, couldn’t provide enough res… nah, forget about it, GTA V provides enough cash. There were simply not enough people and maybe time for the game.

This third-person adventure/exploration is only recommended to those who are patient, and I also have to say that Ancestors: The Humankind Odyssey is currently exclusive to the Epic Games Store. Improving the monkey, raising our children (maximum of two), being part of a clan – all these are good ideas, but the execution is… terrible. Panache Digital Games wanted to achieve far too much, but they couldn’t get there. Pushing people to their limits is not a good thing, and Désilets got an unrewarding task from the ungrateful leadership, putting him into a bad spotlight. And thus, I’ve been thinking a lot how to score the game. First, I thought it’s a 4, but it’s not justified. 5/10? No. 5.5? No. 6? Let’s place it somewhere 6 and 6.5 out of 10. Ancestors, using Unreal Engine 4, has good things, but we have to get there. We have to learn everything, but what for? The game will likely be sh_ttalked by many, but it was made by a smaller team. The 40 euro/dollar price is not fair, though. (It will be more than that – Epic will push the fees over to you.) Get it for half price maybe, that’s worth it, but for full price, absolutely not. Let’s hope it will be far more improved than this by the time it will launch on consoles.

– …as well as a lot of failures and annoying factors
– The soundtracks’ motives tend to repeat a lot
– The game itself isn’t up to snuff, making the base concept not hit the right notes

*hits a tree with sticks* Like A Dragon: Ishin – The Latest Trailer Focuses On The Game’s Story! [VIDEO]