REVIEW – After nearly two decades, the Shenmue series are continuing, but not on the SEGA Dreamcast. Shenmue, which was one of the respectable exclusives on SEGA’s last console, managed to keep itself as is with the third instalment. It doesn’t change itself too much for recent trends to disappoint its fans in the long run.

In case you played the re-release of the first two Shenmue games on PlayStation 4, Xbox One, and PC, then III is continuing right after the events of II: Ryo and Shenhua begin their adventure in the cave, although with slightly less supernatural elements this time around.

Not for the rookies

If I had to describe Shenmue III in the shortest way possible, I’d probably say „it’s an adventure from the past that doesn’t budge an inch in regards to compromises.” This thought can be applied to several aspects. For example, the visuals look mixed: while the environments can be called stunning here and there (Yu Suzuki’s creation is powered by Unreal Engine 4), the characters managed to keep their old look to an extent. I can say the same about the gameplay, too: you still have to look for clues, and for that, you must communicate with people around you (you’ll start in Bailu village – if this location doesn’t grab you, I’d recommend playing the game right away), which kept that classic touch of finding the right person to speak with to progress the story, which results in Ryo adding more notes in his trusty notebook. As the days go by (Ys Net would have made a fatal mistake if they skipped this aspect!), Shenmue III rewards those who are sticking by – especially those who end up using the first-person view with the left trigger on the console versions, as it will make their investigation a bit easier.

Shenmue III’s QTEs (press the button the game displays as quickly as possible – if you played Resident Evil 4, you’ll know what I’m talking about) seem to have been toned down a bit, and I believe Ys Net has made them a bit more forgiving than in the first two games, so this might be the only aspect where I can say that Shenmue III’s no-compromises approach has been slightly watered up.
With the combat, I have to preemptively warn you that the HP and the stamina share the same bar – if you run across a field, and then stop to punch someone in the face, you’ll more likely end up getting knocked out. To restore your health, you’ll need to eat. For that, you will have to have money. And you won’t have a lot. For that, you either have to stop doing some grunt work (such as cutting wood), or get some gambling done, unless you will improve your stamina in the dojos by practising your moves. 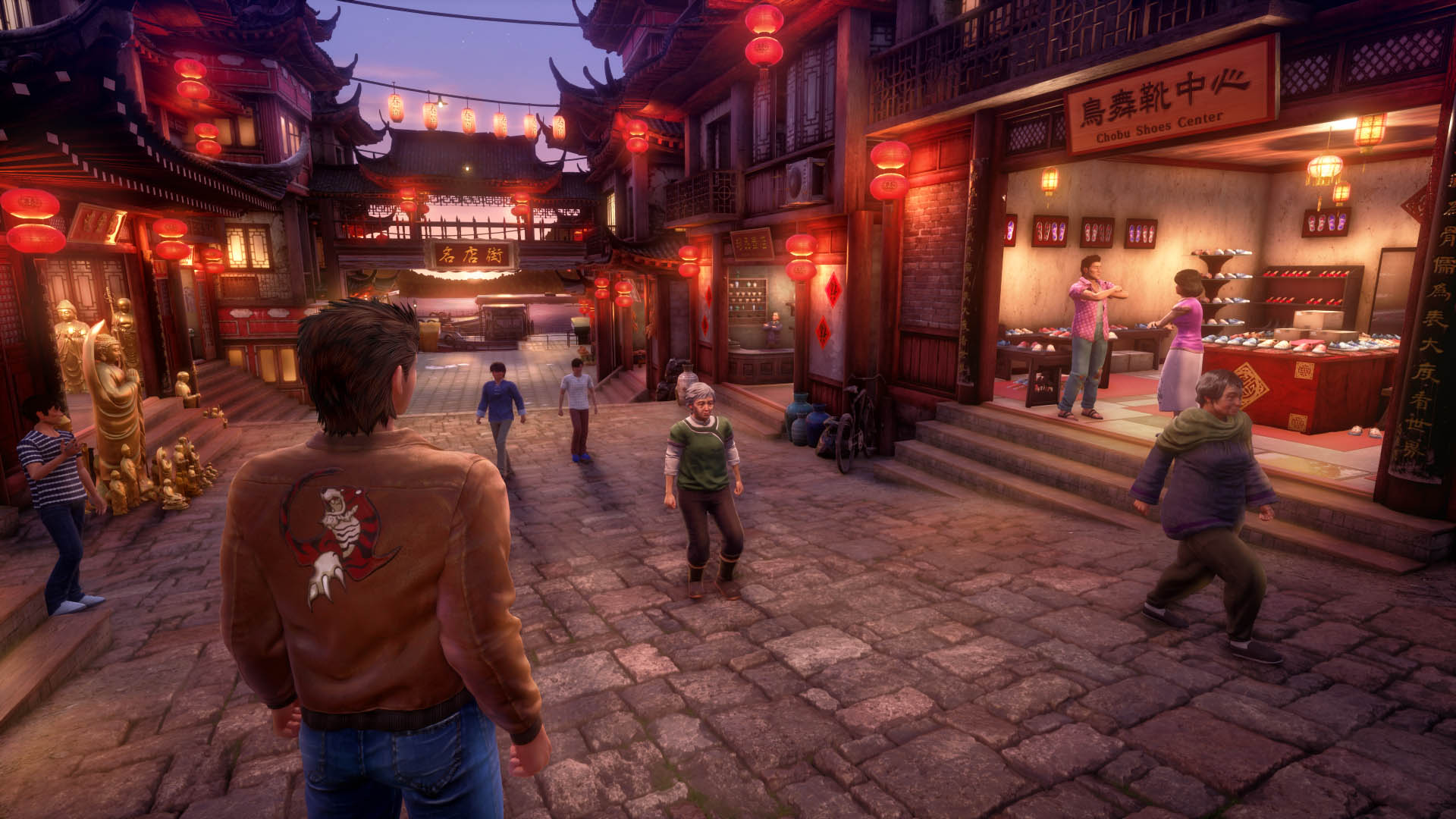 However, in this aspect, Shenmue III has taken a large step ahead: Ryu has improved his Kung-Fu experience significantly, and he can also practice with the locals to fine-tune his moves, but due to the retro style, they will not be STRONGER. To increase your attack power, you have to buy new scrolls.

So: you have to grind (think about it, that’s the end goal here), plus your protagonist’s speed seems to have been neutered to an extent, but the combat seems to be rewarding a strategic approach. The battles have received some depth, and you can’t go Rambo either. If only you didn’t have to gobble food before combats. I can’t say it’s a good thing, and the same goes for artificial intelligence, which sometimes ends up as smart as a wooden log. If the enemies work properly, then you will feel the combat, especially if you get the pacing right.

Yes for the veterans

Those who rate Shenmue III five or six points out of ten don’t understand what Yu Suzuki wanted to achieve. Sure, the game got delayed by two years. Sure, the game got Epic Games Store-exclusive on PC (but, in return, Deep Silver FINALLY realized that Denuvo is unnecessary). Sure, it had an impact on the Kickstarter backers, as they were promised a Steam code, but these won’t affect the rating. Shenmue III has a charm (which can be felt on the voice acting, too), and the ambience is also very good. If there was no requirement to grind a bit in the first few hours, my rating would be a point higher. Thus, Shenmue III gets a 7.5 out of 10. It could be a 7, yes, but not an 8 out of 10. It can provide a lot of entertainment, and it has a crowd to appeal to, no doubt about it.

I cannot recommend this game for those who grew up with Halo-s, Killzone-s, or Call of Duty-s. If you had a Dreamcast before, you probably had this game, too. (I didn’t have that. Instead, I played Metropolis Street Racer until I had to give the console back.) For them, I can easily say that Shenmue III is a bit of time capsule, antiquity that doesn’t give a damn about modern trends. The story is far from over, but if this game sells well, we probably won’t have to wait so many years for the sequel.
So I’m not saying that Shenmue III sucks. It’s a respectable 7.5 out of 10. It could have been better, but if you have been waiting for the continuation of the plot, you’ll get immersed in Yu Suzuki’s world quickly.

REVIEW - After nearly two decades, the Shenmue series are continuing, but not on the SEGA Dreamcast. Shenmue, which was one of the respectable exclusives on SEGA's last console, managed to keep itself as is with the third instalment. It doesn't change itself too much for recent trends to disappoint its fans in the long run.   In case you played the re-release of the first two Shenmue games on PlayStation 4, Xbox One, and PC, then III is continuing right after the events of II: Ryo and Shenhua begin their adventure in the cave, although with slightly less supernatural…
Shenmue III – Antiquity
Shenmue III – Antiquity
V
It could have been better, but if you have been waiting for the continuation of the plot, you'll get immersed in Yu Suzuki's world quickly.

It could have been better, but if you have been waiting for the continuation of the plot, you'll get immersed in Yu Suzuki's world quickly.