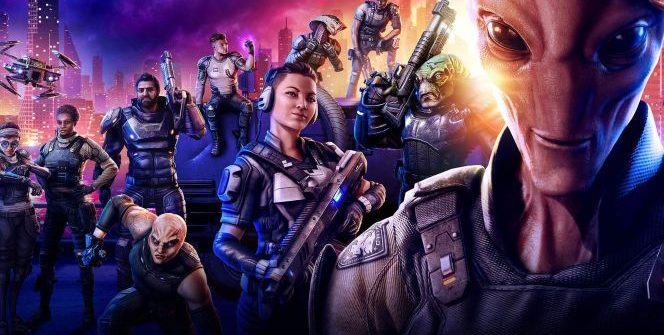 REVIEW – I was highly suspicious when I noticed that a new XCOM game was announced out of nowhere, only for it to be released in just a few days after its announcement by Take-Two (2K, but T2 owns it all…). It’s an XCOM-light, but it has a small problem behind it.

It’s an elephant in the porcelain store.

We’re five years after the events of XCOM 2 (and yes, let me put it bluntly: buy that game, not this one), and humanity has defeated the Elders. However, some aliens have remained on Earth, and now, the two races are trying to live together to collaborate and perhaps improve each other over time, benefiting both the humans and the aliens. Its prime example, or should I say Potemkin village, is City 31. As expected, the timed detonator blows up (which also applies to open the country up prematurely with the coronavirus, resulting in a pretty damn deadly second wave), so the Chimera Squad gets sent in. This elite squad has both humans and aliens, and unlike in previous games, we get complete characters with each of them having their unique motives, background lore, and the characters come with unique skills to provide variety to benefit many of the potential playstyles. There will be more people than team spots – the group will consist of four squad members, and they’ll be the one to clear up the battlefield.

Between the missions, you can deal with your things in a bunker, and this time, there is no base-building factor. Slowly, you will open multiple rooms in it to have research or training (to buff the characters and get rid of the permadeath-replacing Scars). The Scars are giving you semi-permanent character debuffs, reducing the stats of your character, mostly hurting their respective skills, and this debuff will stay on them until you send them to heal, resulting in them temporarily becoming unavailable. With this, Firaxis wants you to swap characters if you can’t beat the missions without scars, but messing up the next mission with the other characters could cause more scars, and it might put you on a downward spiral.

One of the mission types utilises the Breach mode. As each mission has at least one confrontation (there could be more) on a somewhat small map (especially if you compare it to previous XCOM titles), you’ll decide where the characters of the Chimera Squad will be at the start of each mission. You have to take into consideration how much the enemies could spot you, plus the amount of damage you will take if they respond aggressively. After that, all your team members get to attack first, and the time slows down so you can keep track of the events. You have to take note on which enemy has an aggressive reaction or get surprised (the latter allows you to get rid of them quicker). Then, the enemies’ turn follow. The Breach ends, and the unique thing kicks in: on the right side of the screen, you see a bar with the initiative score of each team member. This is something you must get used to, but it allows you to strategise even more. (The camera could still cause some wtf moments. Of course.)

In return, you get almost no variety in the mission types – the locations are varied, yes (power plant, highway, space ship, etc), but most of the goals include either retrieving an item (like a weapon) or to find a VIP member. You either get the item or the VIP and then get out of there, loluwingoodjob.

XCOM Chimera Squad is pretty buggy, sorry to say it that way. Although I did not have this issue, others got into a soft lock situation where the enemies should have taken their turn, only for nothing to happen, resulting in the game halting to zero, which is anything but gameplay. How to ruin the ambience: by suddenly having your characters’ equipment disappear into thin air. Even better: if you can’t apply armour to someone, making this character unplayable altogether, which is *censored for several seconds*.

This makes loadouts random to use or not if you have this glitch lingering there. Thanks for that, Firaxis. OK, previous XCOM titles had issues, but not this much. You can simply feel that this is not a full-fledged title. This is not XCOM 3. Nor is it 2.5.

This is where I’d write my closing thoughts, but I already hinted at my Nintendo Switch artcle that I’ll talk about this separately, so here we go. A German website brought attention to Take-Two (and I don’t think it’s Firaxis’ fault but the publisher’s, as they were the ones that possibly forced the dev to put a goddamn slot machine into NBA 2K20’s garbage MyTeam mode, which made the Internet particularly angry) doing shady things with this game.

The game’s launcher.exe generates multiple txt files, bringing telemetry in, as it also saves several of your account IDs. The companies behind this? Google, Amazon, Microsoft, Firaxis, 2K/Take-Two, Idol Software (then again, this is for crash reports), and… XSolla, which should be a payment, marketing, distribution company. Before you start the game, you connect to twenty IP addresses. You can’t play offline without some tricks (\steamapps\common\XCOM-Chimera-Squad\Binaries\Win64\xcom.exe -review -noRedscreens -nostartupmovies – you’re welcome), and there are also four URL shorteners, two of which are from Yandex. Firaxis’ data router also seems to follow what the Epic Games Store’s launcher does. Let me repeat: aside from not going neck-deep into this subject – the link has everything in German there… -, this all happens before you even get to the GDPR window. So it happens before playing the game, and the telemetry thing is running in the background, calling Take-Two all the time.

Thus, I don’t recommend buying this game. I always detest DRM (and if Magnew somehow sends this year’s F1 game to me, I’ll still kick Codemasters for still using Denuvo), and this is also a subject we need to bring up. Sure, I’m sure other games use this as well, but it’s highly suspicious if it’s with a new instalment of a franchise at a discount price. If there was no telemetry non-sense, the game would get a 6/10, or even a 7/10 without the glitches (the audiovisuals are fine, the story is passable), but with them, I kick this game out the door with a 4/10. Take-Two is now a cockbag publisher, and it plays a role in degrading the games. At least they didn’t toss loot boxes in there, because then, it’d have received a 3/10. It’s not fair from the publisher – they can hide behind their EULA, as they know not a lot of people read it. Congratulations. (Firaxis was previously caught using Redshell in Civ 6 so they aren’t angels either.)

+ Breach
+ Most of the characters
+ More tactics

REVIEW - I was highly suspicious when I noticed that a new XCOM game was announced out of nowhere, only for it to be released in just a few days after its announcement by Take-Two (2K, but T2 owns it all...). It's an XCOM-light, but it has a small problem behind it.   It's an elephant in the porcelain store. City 31 We're five years after the events of XCOM 2 (and yes, let me put it bluntly: buy that game, not this one), and humanity has defeated the Elders. However, some aliens have remained on Earth, and now, the…
XCOM Chimera Squad – Cheapcom
XCOM Chimera Squad – Cheapcom
V
Telemetry above all