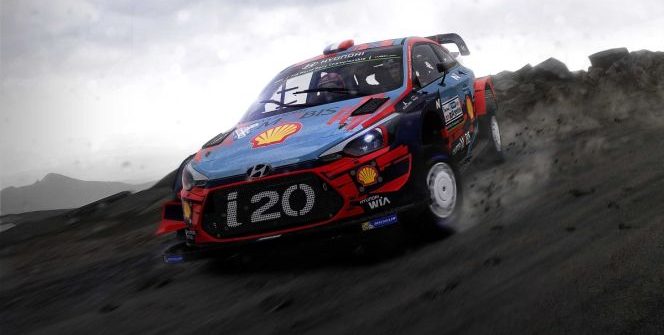 REVIEW – The World Rally Championship cannot stop with its game adaptations despite the coronavirus global pandemic, and we are already its 9th numbered instalment, even though it could be higher if we included Evolution Studios’ five PS2 titles.

Last year (when I wrote something so-called official for it, not this year due to a limbo), I pointed out how jerk of a move it was from Kylotonn (who call themselves KT Racing, but I’m not going to do that) said two weeks away from the launch of WRC 8 that they are leaving Steam in favour of the Epic Games Store. Now, the sequel came out on the EGS by default, so I can’t point it out as a negative to the publisher (who since renamed itself from Bigben Interactive to Nacon). Due to the continuity, I could quote what I wrote in WRC 8, as WRC 9 seems to have continued where the previous game stopped in many aspects, so if you had the previous game, you already know what to expect this year. So, once again, the game just dumps you on the track, and it will test your skill that way. That’s your tutorial, and depending on your results, you’ll get offered a few helper functions in the gameplay. (F1 and MotoGP games also seem to lack the tutorial, jumping far away from the couch players.)

The line of continuity (just as my motivation within seconds) breaks at the handling model. I believe this year’s WRC doesn’t feel as good to control as last year. Somehow it seems to lack the healthy midway point between an eel and a stone, as in, you either slide around uncontrollably, or you can barely turn your car, and there’s not much of a handling model in between these two. And if you want to drive an older car, pray that you can stay on the road, as the vehicle can easily slip out of your control if you aren’t careful. With all this, I want to express that you need to learn the handling model. And WRC 9 – despite offering the helping functions – will not help you.

Still, it has an ambience if you can get the rhythm down, because in that case, the adrenaline-filled, tense driving comes through, and I like that. The locations also add fuel to this imaginary fire. You’ll get asphalt (Japan), muddy gravel (Wales), and even snow (Sweden), and if you play from the cockpit angle, you’ll have the added fear of your windshield wiper doing its thing right in the middle of the corner. That reminds me of the weather, which is still dynamic, just like how it was in 8. The rain effects are spot on, congrats to Kylotonn for that – perhaps only the first DiRT Rally, or maybe Colin McRae Rally 2.0 could do something similar until now. It’s detailed, but I don’t think anything can run it at sixty frames per second on a console. The PlayStation 5 and the Xbox Series X will have to do so, it’s expected from them.

I’m not going to go into detail with the career mode as its structure is the same as what we have seen last year, and I could simply copy and paste what I wrote for WRC 8 but then I’d get the usual complaints, so I’m not going to do so. Instead, I’ll talk about the sounds. Last year, I didn’t like them that much, but Kylotonn might have finally got its act together on this front. Take a look at some of the replays. Not to see yourself kiss that tree by the trackside but to hear how it sounds. Regardless of class (Junior WRC, WRC 2, WRC), the cars will sound different, and throughout the career, you’ll get to try most of the cars. Sure, you can start in WRC 2 instead of JWRC if you want to do that, but you will still have to manage your team, as well as its schedule. You’ll still have the heavilydamagedcar-anditsrainingatnight-gettothefinishline extreme challenges, for the sake of continuity. If you don’t want to deal with a team, just go with a season. If you want to get accustomed to a car’s tricks, play Test Area. Multiplayer got improved: via Clubs, you can create challenges for other players, in case the limited-time events do not interest you.

Last year I didn’t give WRC 8 an 8 out of 10 and I won’t do the same for 9 this year, as I think the handling model takes away everything that is built up as a positive. If they would have kept the controls from 2019, then I’d have given it an 8, but instead, it will get a 7.5 out of 9, and Kylotonn seems to have finally left behind its start with its first three WRC games. If you want to desperately play this on a console, I’d wait for the PlayStation 5 port, as its frame rate will be higher and more stable. I’d not pay this much for this game but that’s just me. The multiplayer is taken a bit more seriously, the career mode is as deep as last year, and there is no lack of cars. If you liked WRC 8, you won’t be disappointed in WRC 9. The controls are not good, though. The sense of speed is great, however… But if you like the World Rally Championship, I can safely recommend WRC 9 for you…

REVIEW - The World Rally Championship cannot stop with its game adaptations despite the coronavirus global pandemic, and we are already its 9th numbered instalment, even though it could be higher if we included Evolution Studios' five PS2 titles.   WRC 8.1.     Without a hairpin   Last year (when I wrote something so-called official for it, not this year due to a limbo), I pointed out how jerk of a move it was from Kylotonn (who call themselves KT Racing, but I'm not going to do that) said two weeks away from the launch of WRC 8 that…
WRC 9 – Number 9, Number 9
WRC 9 – Number 9, Number 9
V
Controls should have been better

Controls should have been better