REVIEW – RIDE 3 was exceptionally good in my opinion (even though I did not look at it officially, however dumb that sounds), so the question stands: is the fourth game up to snuff?

The answer to that is yes and no. 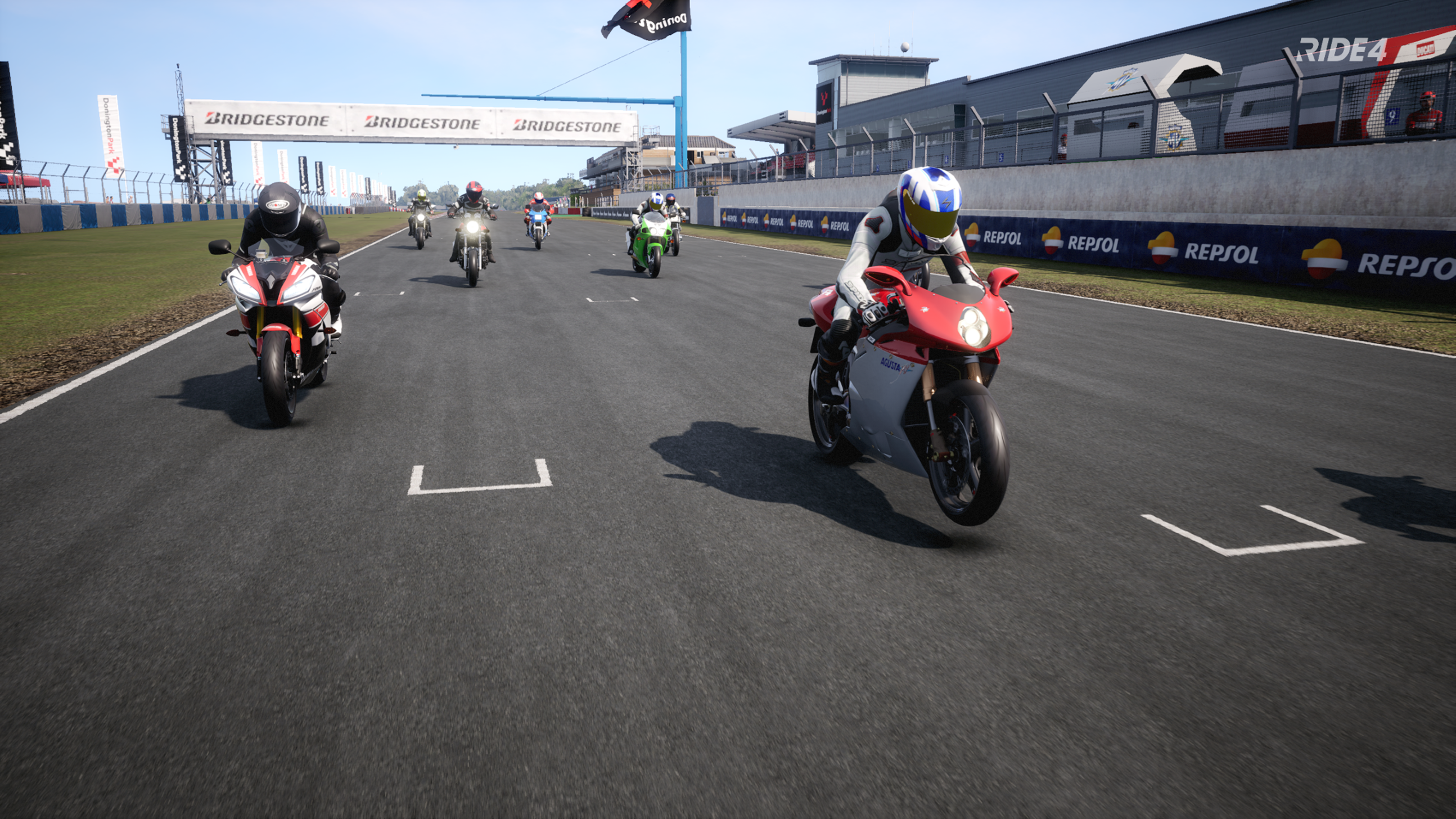 RIDE 4 isn’t messing around. It immediately asks the player to create their character with a few presents, then define the video- and audio settings. They should have put the controls in here as well, as, for me, WASD is not fitting for racing. Then, you get thrown on Tsukuba with a bike, and then get around in time (gold, silver, bronze times, get bronze at least). And I’m not joking: Milestone tosses you into deep water like that. And if you get through, then you can choose your starting region (Americas, Europe, Asia), and off you go.

Under each region, you have a regional license, and some cups per cc under Stock and Exhibition features additional races (under Stock, you need to get the Licence tests done to open the races, time trials, driving through gates…), The three regions have a total of 24 cups (and to get one, you need to win all subcategories, and there are three races per cup), and then a maximum of 90 cups in the World League, and finally, the Superbike league. That’s all the career, but under a regular race, you can still pick time trial or endurance. Circuits: under America, there’s Canadian Tire Motorsport Park, Laguna Seca, Virginia International Raceway (with four variants), Road America (2), Road Atlanta (3), Interlagos, and Utah Motorsport Campus (4). In Europe, there’s Brands Hatch (2), Cadwell Park (4), Donington Park (2), French Riviera (2), Imola (2), Magny-Cours, Monza, Mugello (2), Nürburgring Nordschleife (!), North West 200, Nürburgring GP (3), Oulton Park (3), Algarve (2), Snetterton (3), Southern 100, and Imatra. The Imatra-Southern-North West trio contains proper street/road racing. Asia has Kanto (2), Makaó, Okayama (2), Suzuka (3), Tsukuba, Sugo (2), and Philip Island (1). According to their Facebook post, Daytona and Ulster GP will be free, while Valencia and Kyalami will be paid DLC, respectively. I’m not going to list the bikes, but you can upgrade them the same way as in three, and you can remove the mirrors and license plates for better performance. 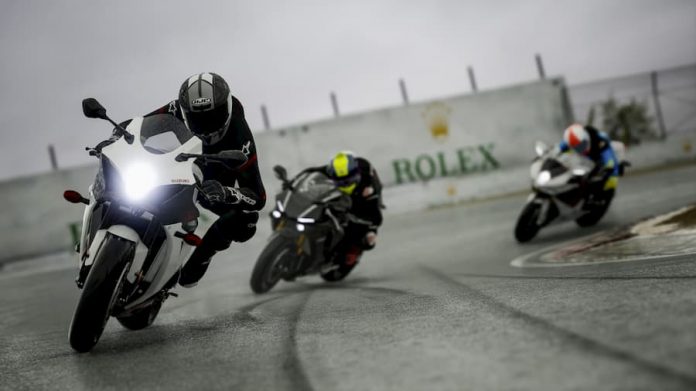 The physics have improved massively, opening it to more serious players. Most of the time, you can’t even disable tire wear even with all the helpers on, so you still need to learn everything, and that’s possibly why the rewinding is unlimited in the game. RIDE 4 penalized you for cutting corners, and during license tests, going off just a few millimetres with your bike instantly results in failure. I also can’t forget mentioning the time of day changing. During endurance races, you might experience thunderstorms in the middle of the night no less. Speaking of endurance, that’s a new category with new strategies: if your tire wear is bad, you will barely stay on the road. When do you pit, and how much do you refuel? And then, you can also edit the livery of your bike, as well as your helmet, and you can share them with the others online. The graphics are alright, but they feel good in the wet the most, and the sounds are mixed. It does have the immersion when you ride at 280 km/h on Imatra. They are mostly good. No background music for you during races. 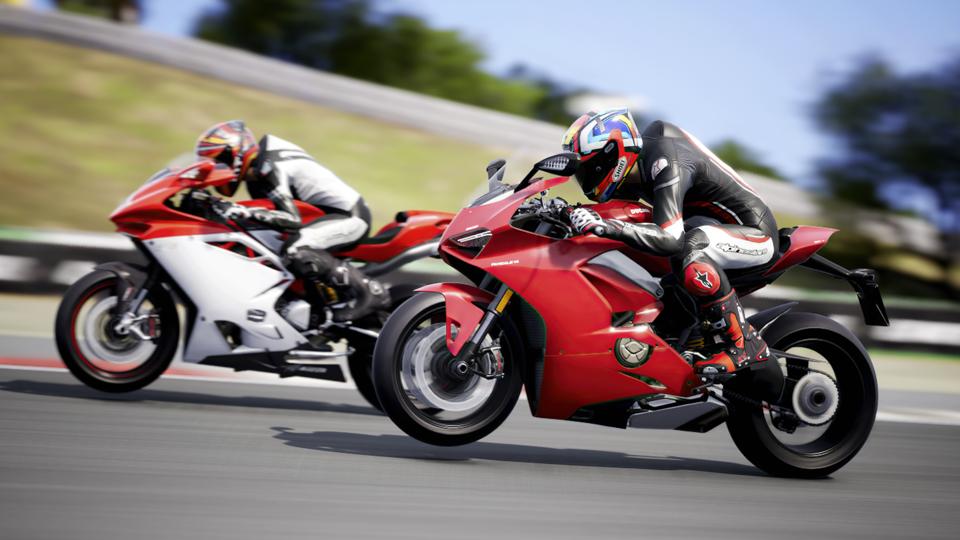 RIDE 4 is not recommended for beginners. Yes, I’m saying this upright. There is no tutorial. The fact that you get randomly on a bike on a track you might have never seen before and be forced to ride until you get to bronze is strongly demotivating. It’s also unreal how I buy a bike and then I can only sell it for like 50 value even if I never rode that bike. Also, you HAVE to do the license tests, or the career mode will be heavily limited, as cups and points are necessary for progression. In my opinion, the third American license test, the Harley Davidson one on Laguna Seca, is ridiculously difficult. You need 1:19.300 to get a bronze. I could hit 1:22. Don’t forget: just ONE wheel going off track immediately results in you forced to see your rider (who still immediately respawns on the bike after a bail) for five or so seconds before you get the chance to restart. And I can’t even move on to the next test until I get a bronze in this one. No matter what difficulty level you pick (you can choose the AI from 20% per 1%), the time is going to stay the same. It means that a professional rider IRL will get to aim for the same time as a casual player on a keyboard. That is ruthless, and here, the reader might say that I should get good, but let’s look at it objectively. It’s not a Souls game. There is a way how you can make this game enjoyable both for pros and rookies. Make the time limits dependant on the physics settings the player uses. So if you want to get a bike game, but you are a beginner, please don’t buy RIDE 4. Get 3 instead,

RIDE 4 has fewer bikes – I counted 17 manufacturers and 105 bikes (with some variants). RIDE 3 had more with 30/250, respectively. There seem to be fewer locations, too, and online multiplayer is also limited to 12 players. The artificial intelligence is brutal. The game is hard in this aspect, and if you are in their way, they WILL bully you onto the asphalt, and they don’t care about your location in the corners either (!), although you can also knock them off without penalty, which is… quite funny if you think about it.

So don’t worry, it runs on Windows 7.

So the game will have DLC, and, as always is the case with Milestone, they were too tight-handed, so I didn’t get it once again, and there’s a Special Edition version on consoles but not on PC, which feels a little like an unfair move. And the score? The press gave it 8 out of 10, but I’m giving it a 7,5. RIDE 3 got the same score, but RIDE 4’s improvements are taken away on other aspects, so it makes a step forward, and another step back. The replays have that cinematic cropping, which doesn’t fit. There’s also a GoPro-like camera angle not used in gameplay. It’s dumb. So I don’t recommend it for beginners, but I do for others if they don’t like the Gran Turismo-like license tests. The game was provided by Magnew, thanks.

– Not for the beginners
– The AI ignores you altogether
– Fewer bikes…? Supermoto…?

REVIEW - RIDE 3 was exceptionally good in my opinion (even though I did not look at it officially, however dumb that sounds), so the question stands: is the fourth game up to snuff?   The answer to that is yes and no.     Cups, Races   RIDE 4 isn't messing around. It immediately asks the player to create their character with a few presents, then define the video- and audio settings. They should have put the controls in here as well, as, for me, WASD is not fitting for racing. Then, you get thrown on Tsukuba with a…
RIDE 4 – RIDEiculous
RIDE 4 – RIDEiculous
V
A little difficult this time around

A little difficult this time around

User Rating: Be the first one !
Spread the love
Tweet
Tagged Microsoft WindowsmilestonePlayStation 4RIDE 4 REVIEWXbox One