Electronic Arts and BioWare wrote in detail about how they handled the Mass Effect Trilogy.

We will quote the relevant parts of the post, as it’s quite a lengthy read: „We took a three-phased approach to remaster the trilogy. Phase 1: building the foundation. We started Phase 1 by identifying and cataloguing every asset in the trilogy. How many particle effects, 3D models, textures, levels, GUI (Graphical User Interface) elements, sounds, cinematic movies, etc. actually exist across the trilogy, and on average what are their quality levels? Do the source assets (content creation files) still exist? What percentage of those assets should we improve, and on average, how long will each asset type take to improve? Knowing the sheer numbers of assets and their quality levels shaped our strategy for improving each “type” of asset.

The original trilogy was released entirely on a console cycle that allowed up to 1080p resolutions but was often actually running at 720p or lower. Now, the remaster is releasing on hardware that allows 4K resolutions, so the answer for how many textures we wanted to improve was easy: every single one of them. For the trilogy, this is well over thirty thousand individual textures. First, we increased the engine limits on texture sizes, so any textures that were authored larger than could be used on-disk could now use their full resolutions. We then wrote some batch processes that worked along with an AI up-res program to increase the original uncompressed textures to four times their originally authored sizes. Our batch tools made special considerations to maintain the validity of special texture types, like normal maps or masks to ensure colours didn’t contaminate each other. At this time, we also incorporated some more modern texture compression techniques that would allow those textures to hold onto more of their quality on the disk. Meanwhile, our programmers were hard at work upgrading our version of Unreal Engine 3 to a more updated and unified version. With the game playable again, and a much higher base resolution to work from, we began to improve assets by hand,” BioWare explains the first phase.

The second phase, which they dubbed modernization efforts, is far more detailed: „Phase 2 was the beginning of what we would consider full-scale development. The art team was now fully on board, and our content creation tools (many of which naturally changed and improved throughout the trilogy) had been stood up, unified, and made to work with more modern content creation programs. Eager to dig in, we started where we knew the biggest improvements were needed: the original Mass Effect. Some assets—most frequently, characters and generic props—were shared between the games, and many had already been improved in a later title or DLC. For those cases, we generally used the improved asset as our base, improved it further, and then ported it across the whole trilogy. This resulted in more consistent and higher-quality assets, but we had to carefully ensure this process didn’t flatten the sense of the passage of time and the overall narrative.

For characters who appeared in all three games, like Liara, Garrus, Kaiden, Captain Anderson, and more, we maintained slight changes throughout the trilogy as they aged, matured, or…got hit by a rocket. Obviously, we couldn’t let uniforms branded with “SR2” sneak their way back onto the crew of the Normandy SR1, and we still liked how the Alliance Admiralty uniforms became more militarized and sleek as the trilogy progressed, so we improved each version of those outfits individually. Our character artists worked their way through a prioritized list of hundreds of armours, creatures, characters, guns, and vehicles across the whole trilogy. They would frequently take an asset back to its original high-poly sculpt, focus on achieving a consistent texture resolution, add supporting 3D geometry where needed, and fix errors with baked normal maps or texture mapping. Central to our efforts was increasing the sense of realism in the surface response.

While the games don’t use PBR (physically based rendering), we could still work with the textures and materials to ensure plastics, fabrics, and metals reacted to light more convincingly. Similarly, we dedicated a significant amount of time to improving skin, hair, and eye shaders across the trilogy. Our tech animators then re-skinned (i.e. set each vertex to move properly when attached to an animated skeleton) each improved mesh and imported it back into each game as needed. The VFX (particle effect) artists were busy extending the length and smoothness of animations for things like smoke and fire, while also adding more secondary emitters to beef up the overall look of each effect. A fire might now have secondary smoke trails and sparks, explosions fling chunks of rubble, and the muzzle flash on your weapons now subtly illuminates Shepard and their surroundings. New environmental particle effects were added throughout the trilogy to better enhance the mood and a space’s sense of life. As many of you have already noticed, we also sharpened up and added secondary elements to the trilogy’s iconic horizontal lens flares.

Many GUI images also needed extra love and attention. In 4K, smooth flowing lines that once only took up a few hundred pixels on screen now expanded across thousands or tens of thousands of them. We had to completely rebuild many elements from vector images to achieve needed clarity and crispness, while other images could be run through secondary, non-automated AI processes to sharpen and clean up artefacts. We also improved all cinematics across the trilogy. Whenever possible, we completely re-rendered the pre-rendered cutscenes in 4K. When it was not possible to re-capture, we utilized an AI upscale program on the original uncompressed videos. In both workflows, we tweaked the colour correction, added or composited additional details and visual effects, and even smoothed out some edges frame-by-frame so they didn’t feel dated when compared to actual gameplay. Cinematic designers fixed dozens, if not hundreds of bugs that occurred in live-action cutscenes and conversations. Don’t worry though; the “What’d you just say?” head-spinning meme still exists if you know how to look for it.

During this phase, environment artists completed passes through each level of the trilogy, performing targeted fixes on any asset or location that visually detracted from the overall experience. This included adding props to exceptionally barren areas, remaking low-resolution or stretched textures, smoothing out jagged 3D assets, and modernizing shaders on surfaces with poor lighting response. At this point, we also began resolving hundreds of bugs, from minor things like floating assets to major game-breaking collision issues—including a very frequent global issue where players could easily teleport on top of assets and become completely stuck. Our lighting designers followed closely behind the level artists, ensuring that all of the beautified environments and characters were always shown in their best, well, light. Mass Effect’s specific lighting style features high-contrast spotlights and heavy use of complementary colours. That style was refined heavily throughout the trilogy, so we were able to bring many of those improvements back into the first game. We focused on maintaining that high-contrast look while adding natural bounce lighting to ensure characters are lit more consistently and beautifully. We made systemic upgrades to shadows and added or improved post-process effects such as screen-space ambient occlusion, anti-aliasing, and bokeh depth of field (increasing the cinematic quality for out-of-focus cameras). We were also able to bring down engine features that existed in Mass Effect 3, such as dynamic volumetrics, to help unify the look of the first two games,” the team said.

The third phase was about rebuilding worlds: „In Phase 3, we began looking at opportunities to make broader improvements to levels and features, rather than just updating the individual assets. By this point, we’d manually improved thousands of assets, but there was still a significant quality jump between the first two games. To guide this effort, we compared the levels we shipped to their original concept art, design intentions, and artistic inspiration. We also took dozens of screenshots of our currently up-res’d levels and sent them over to Derek Watts (the Mass Effect trilogy’s art director), who used them as a base for new concept art paint-overs. These “broad brush” adjustments were much faster to work on in professional photo editing software.

[…] Feros has a few very visually distinct sections, including the colony and the highway that leads to the ExoGeni Corporation building, the aqueducts, and the Thorian lair. The former of these now features stronger smoke and fire effects, more buildings to fill out the skybox, and much more damage and debris to better showcase the attack by the geth. We also leaned into the visual atmosphere of the creepy, dark interiors with directional light shafts guiding players to uncover the mysteries of the Thorian (that sounds creepier than ever, thanks to its new audio mix). Edmontonians are no strangers to brutalist architecture or the blistering cold, so we’ve always felt quite at home in Noveria. Lighting was reworked throughout the level, the storm outside was intensified, and we accentuated the differences between the hotel area and the Synthetic Insights lab to hopefully improve your ability to navigate the mission’s early sections.

Eden Prime is the first location you land on in Mass Effect. It’s described to you as a verdant paradise planet under attack by an unknown alien ship, but the sight that greeted players didn’t always align with that image. Luckily, in the Mass Effect 3: From Ashes DLC (which is, of course, included in the Legendary Edition) we’d already revisited Eden Prime, so we could incorporate its overall atmosphere and specific buildings. We’ve moved the sun’s placement so that the player’s path forward is now illuminated by evening light while the burnt red sky looms behind, punctuated by falling ash and tracer fire. We also improved the planet’s surface with additional fire and battle damage, more foliage, and destroyed structures littering the crater Sovereign leaves behind,” the team said.

Mass Effect Legendary Edition will launch on May 14 on PlayStation 4, Xbox One (the new consoles will also support it), and PC (Steam, Origin). 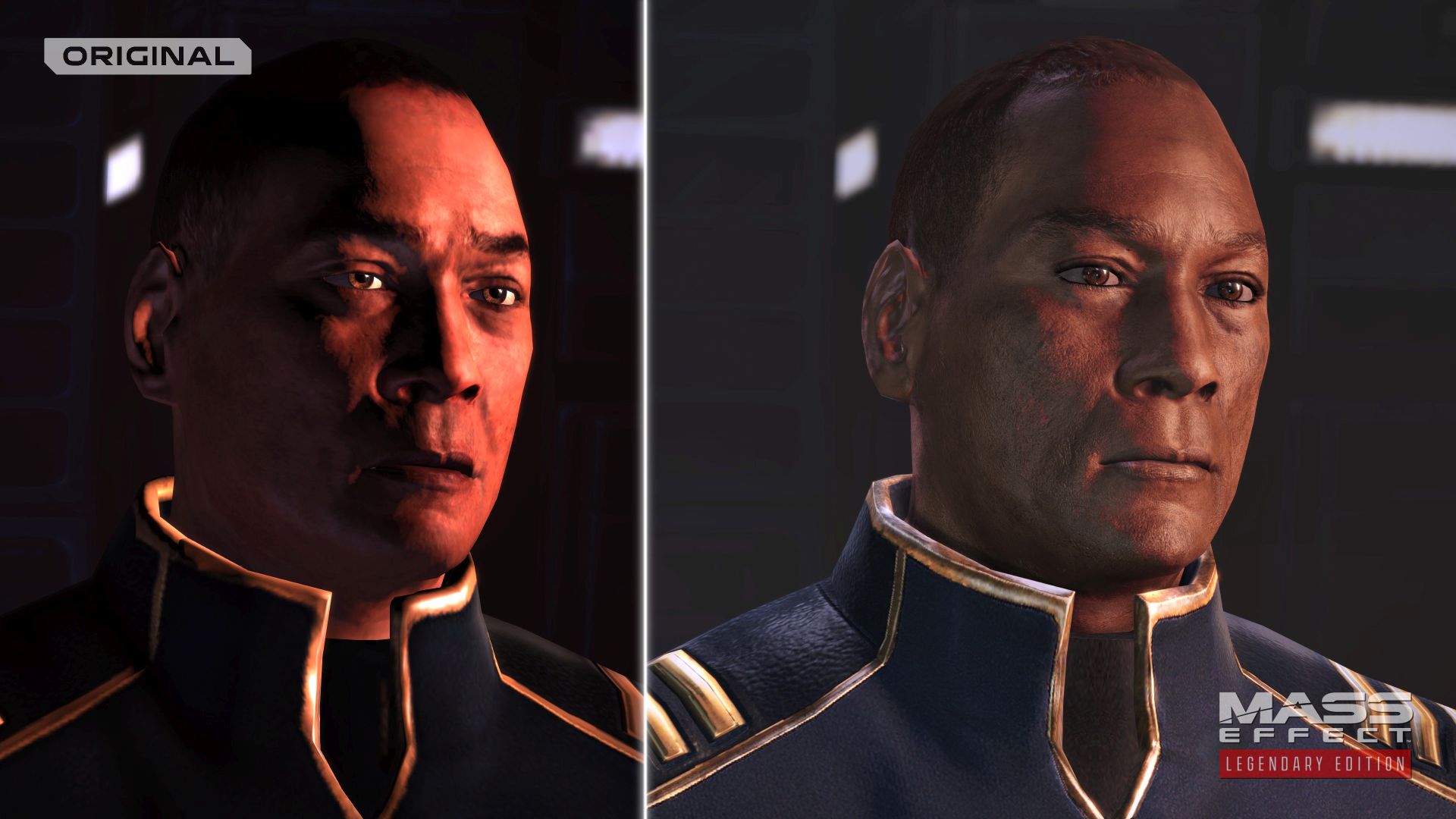 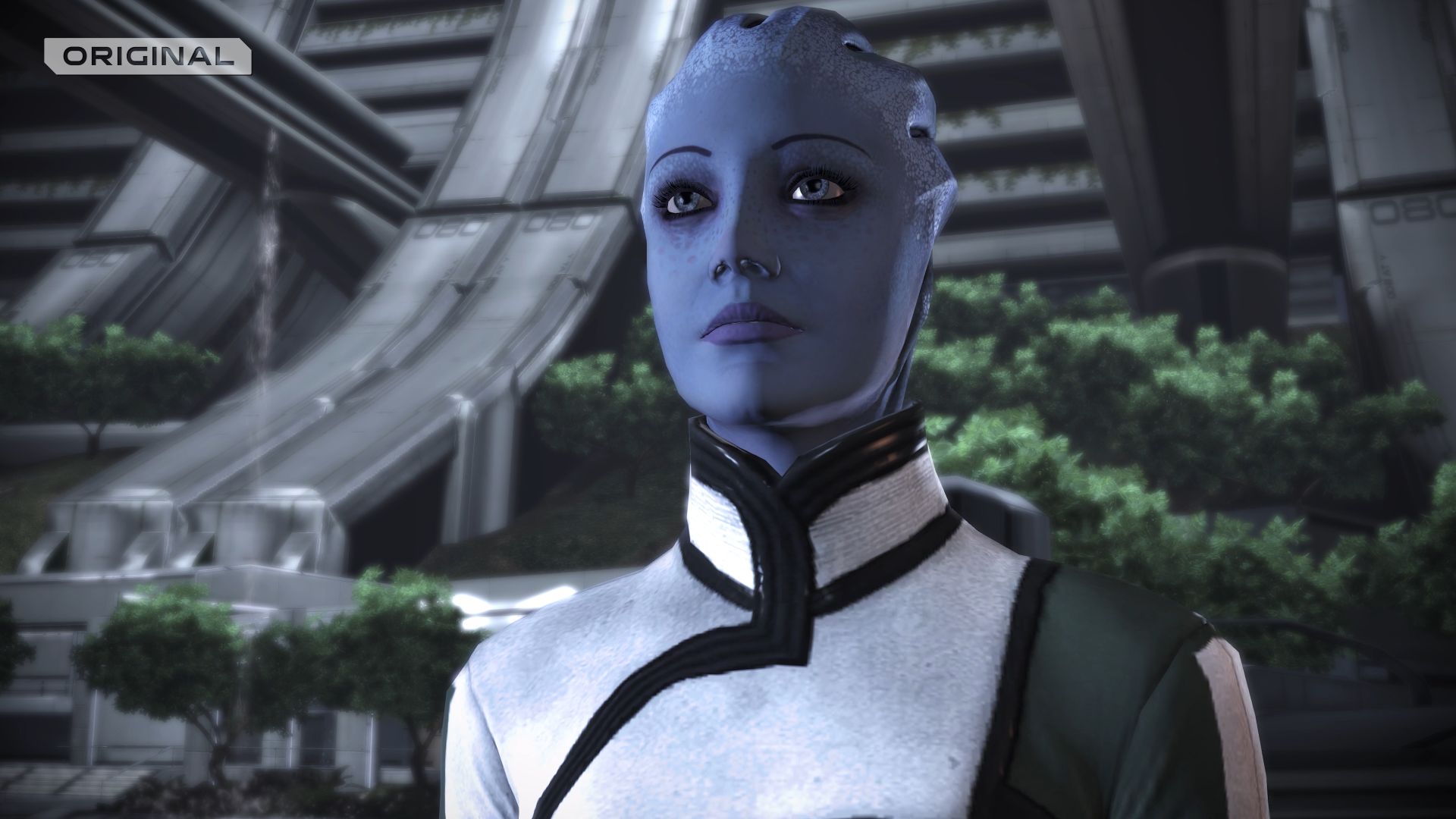 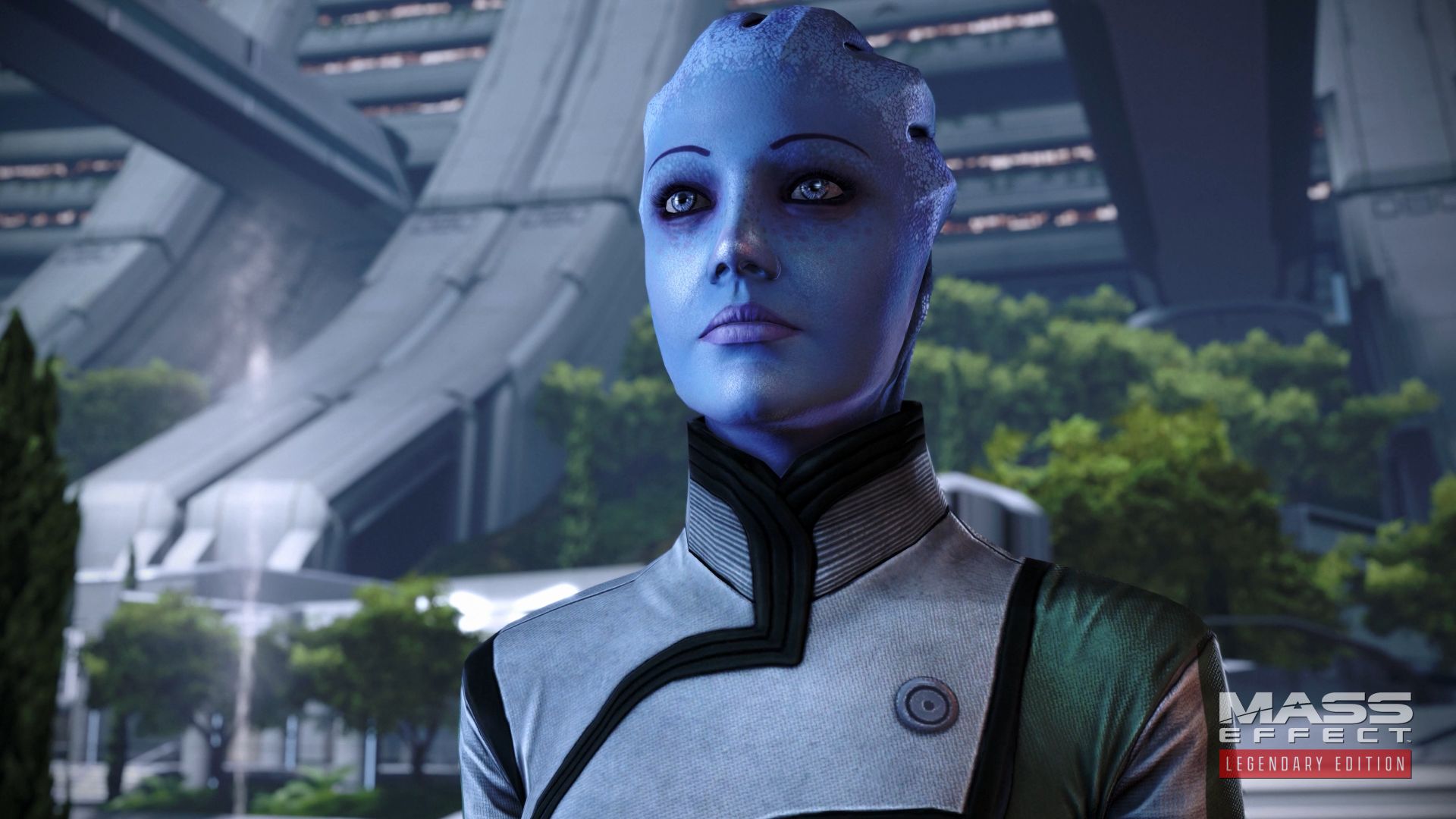 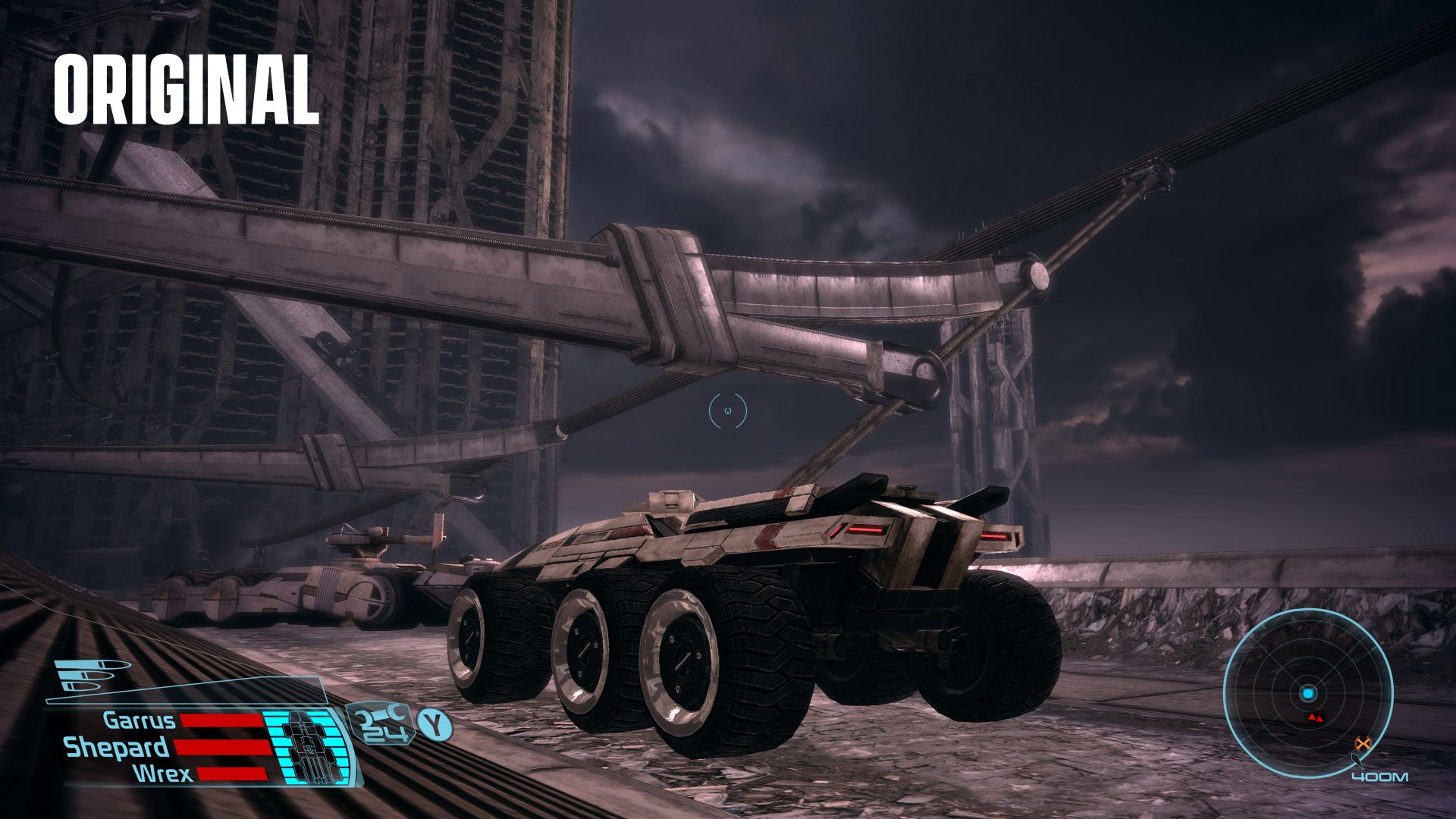 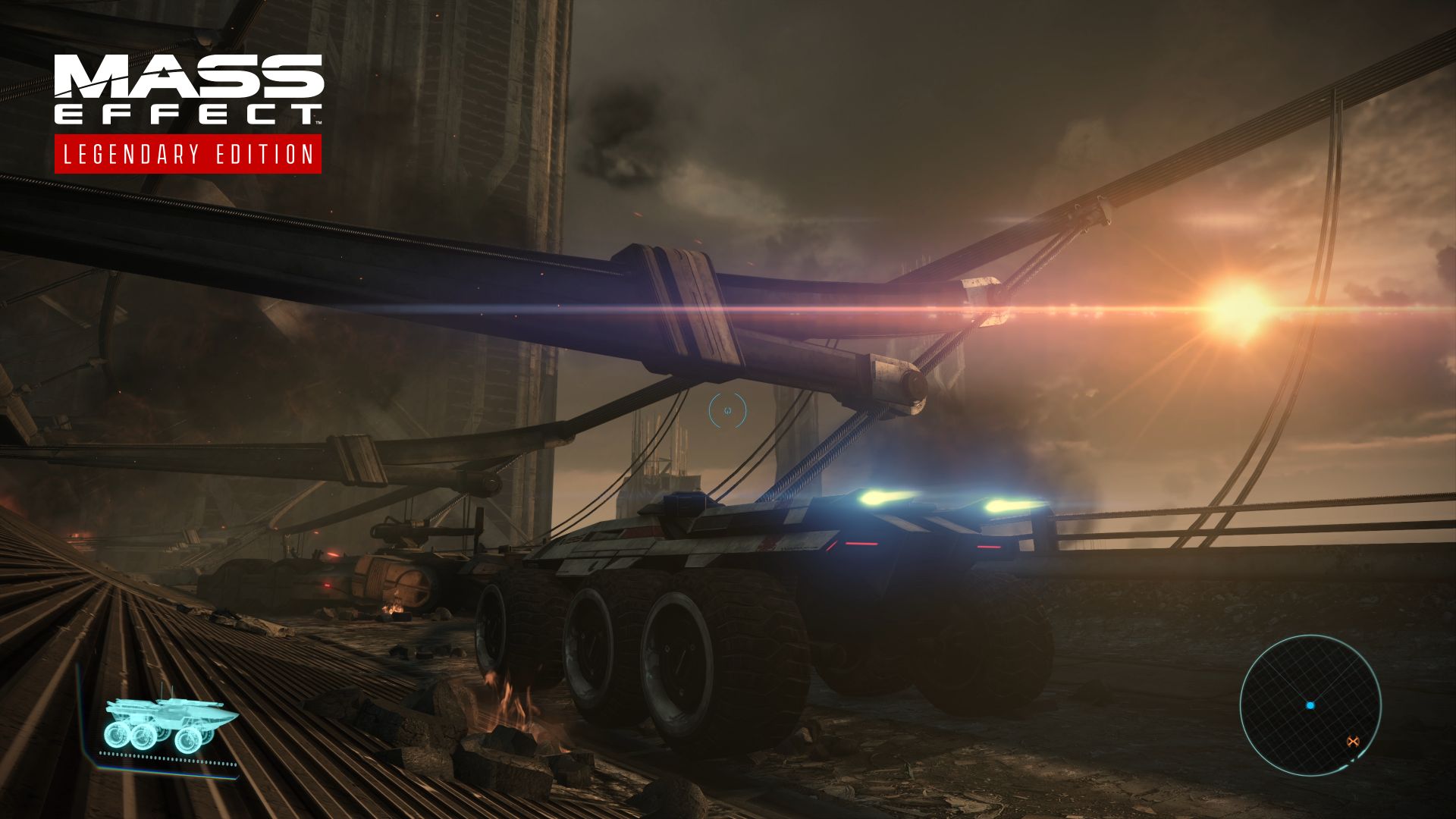 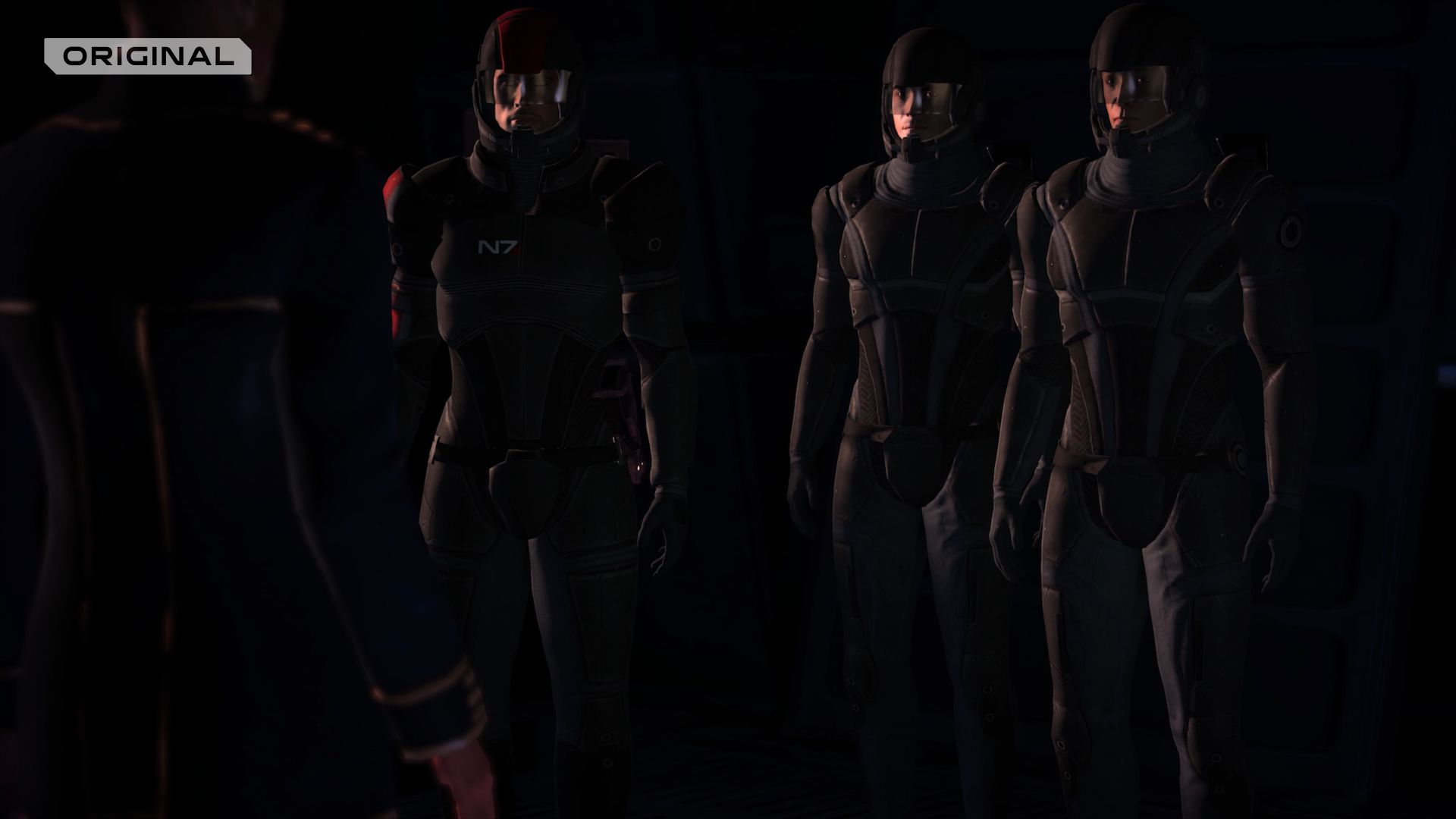 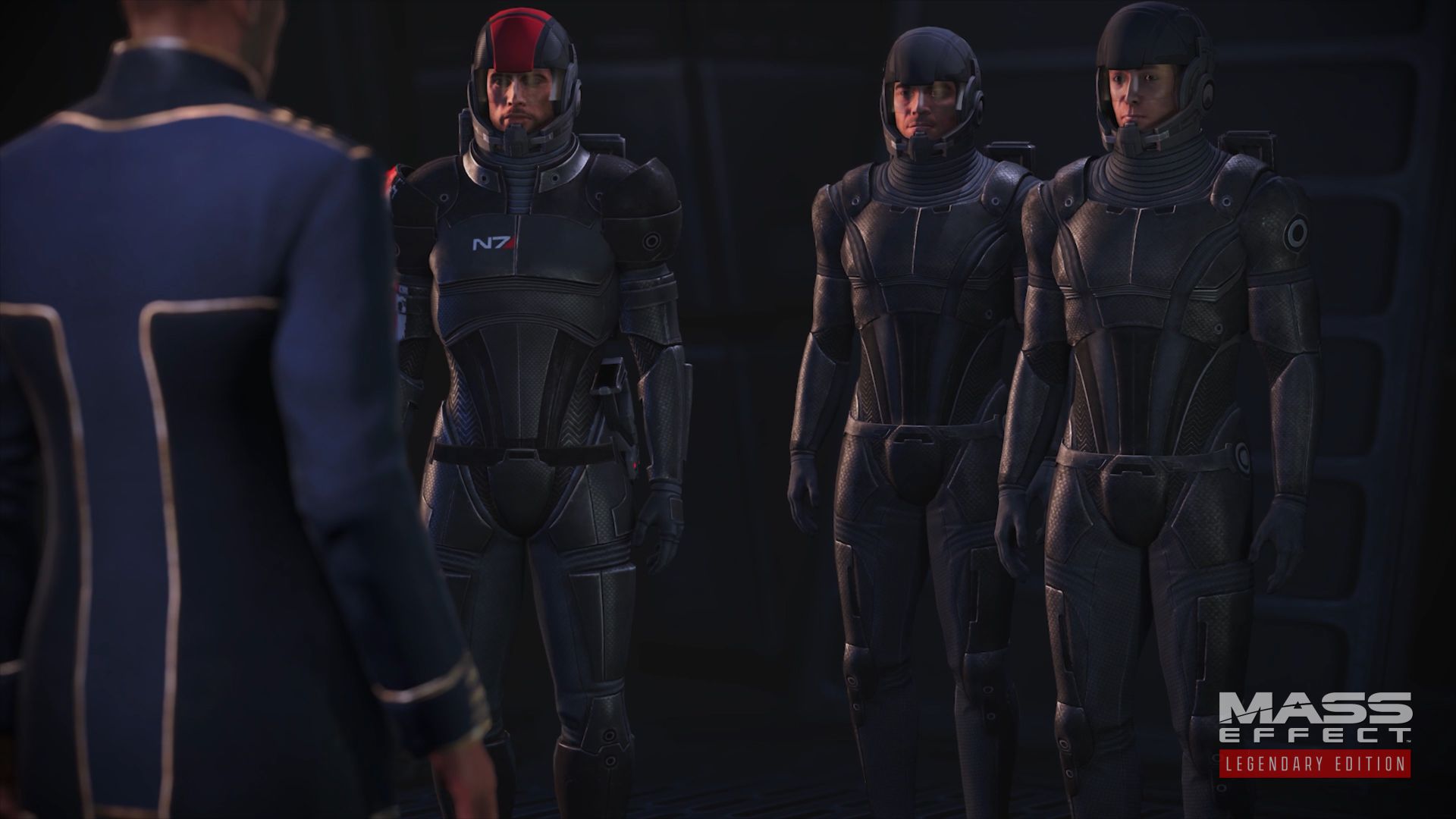 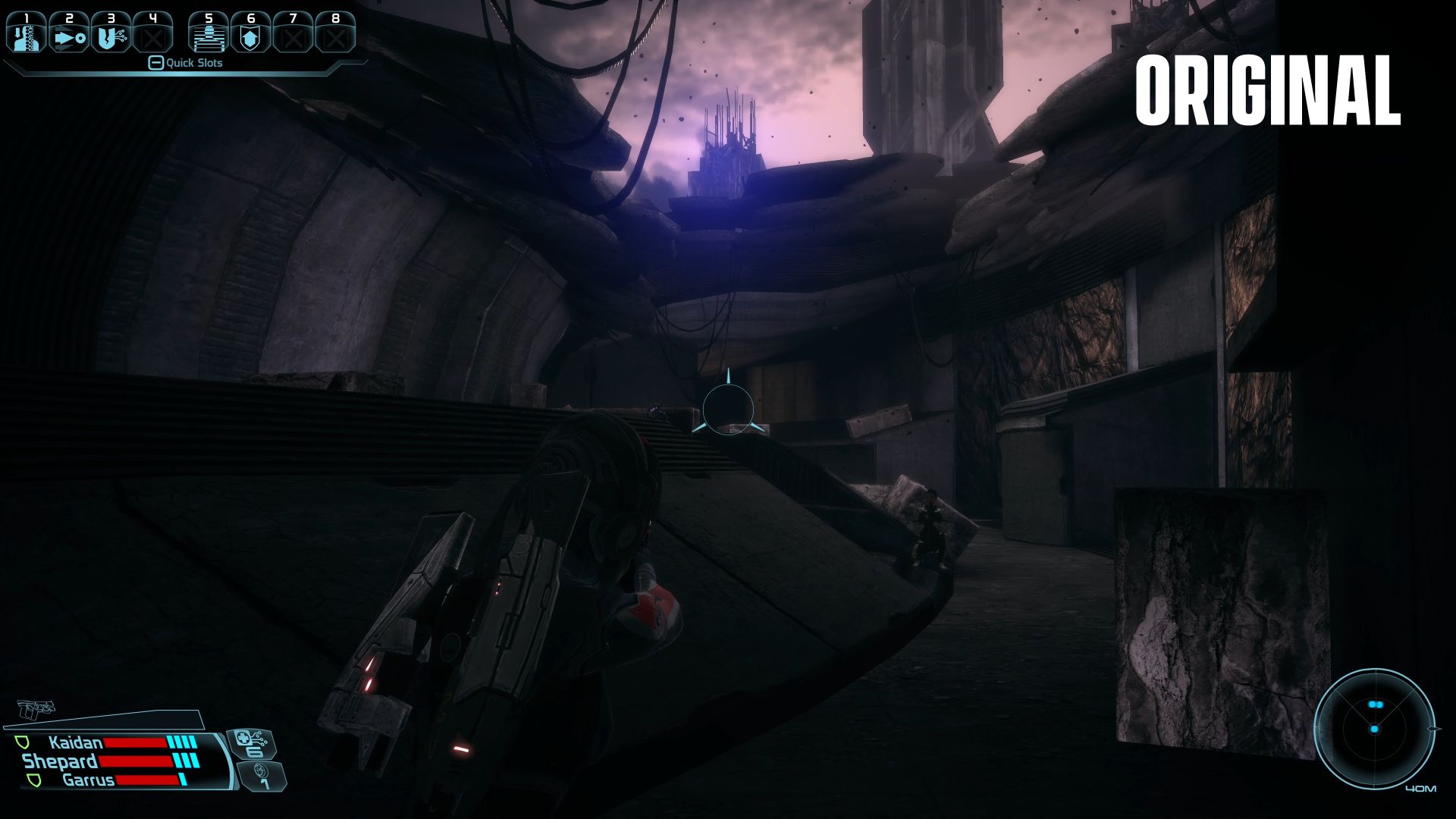 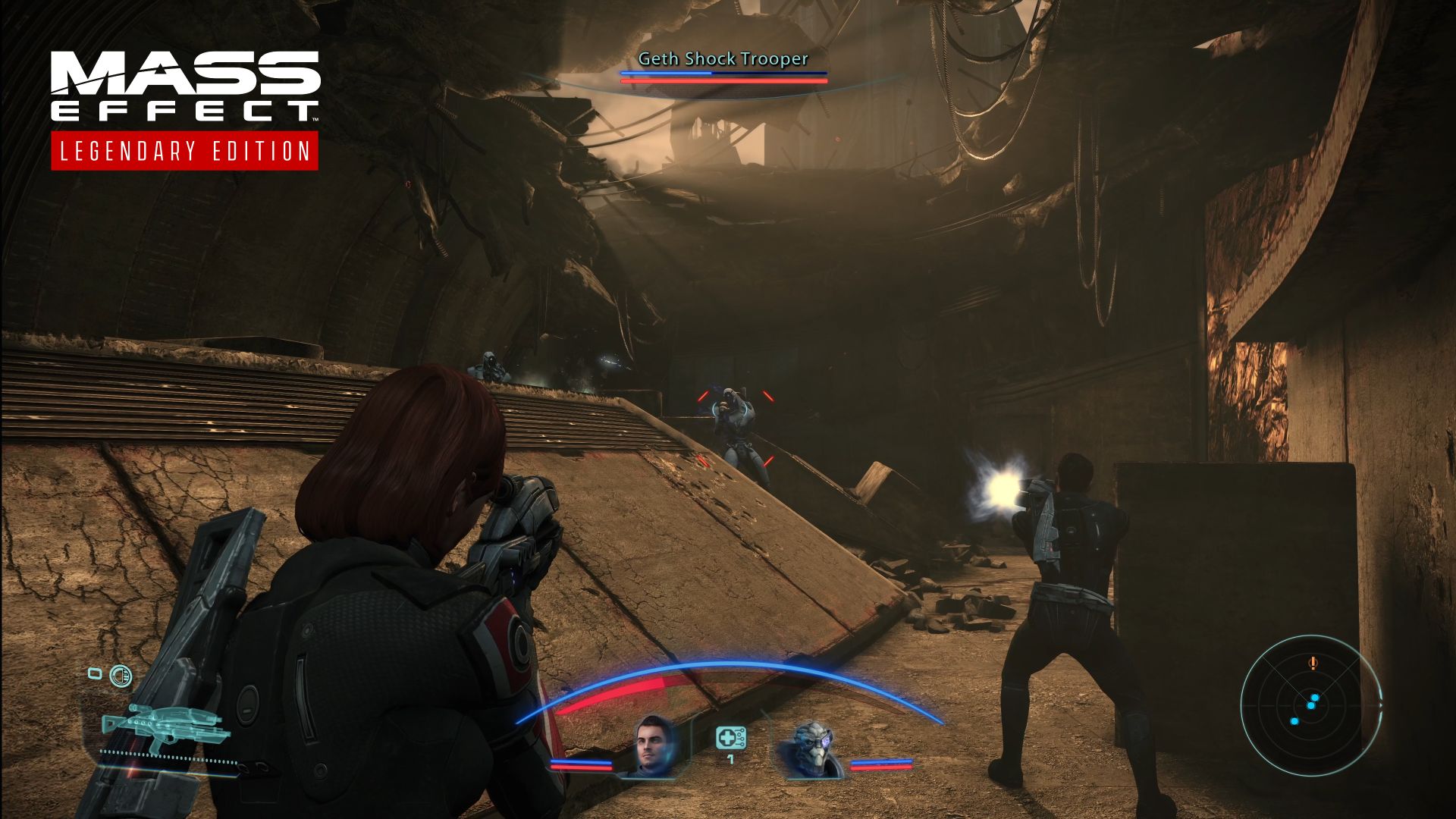 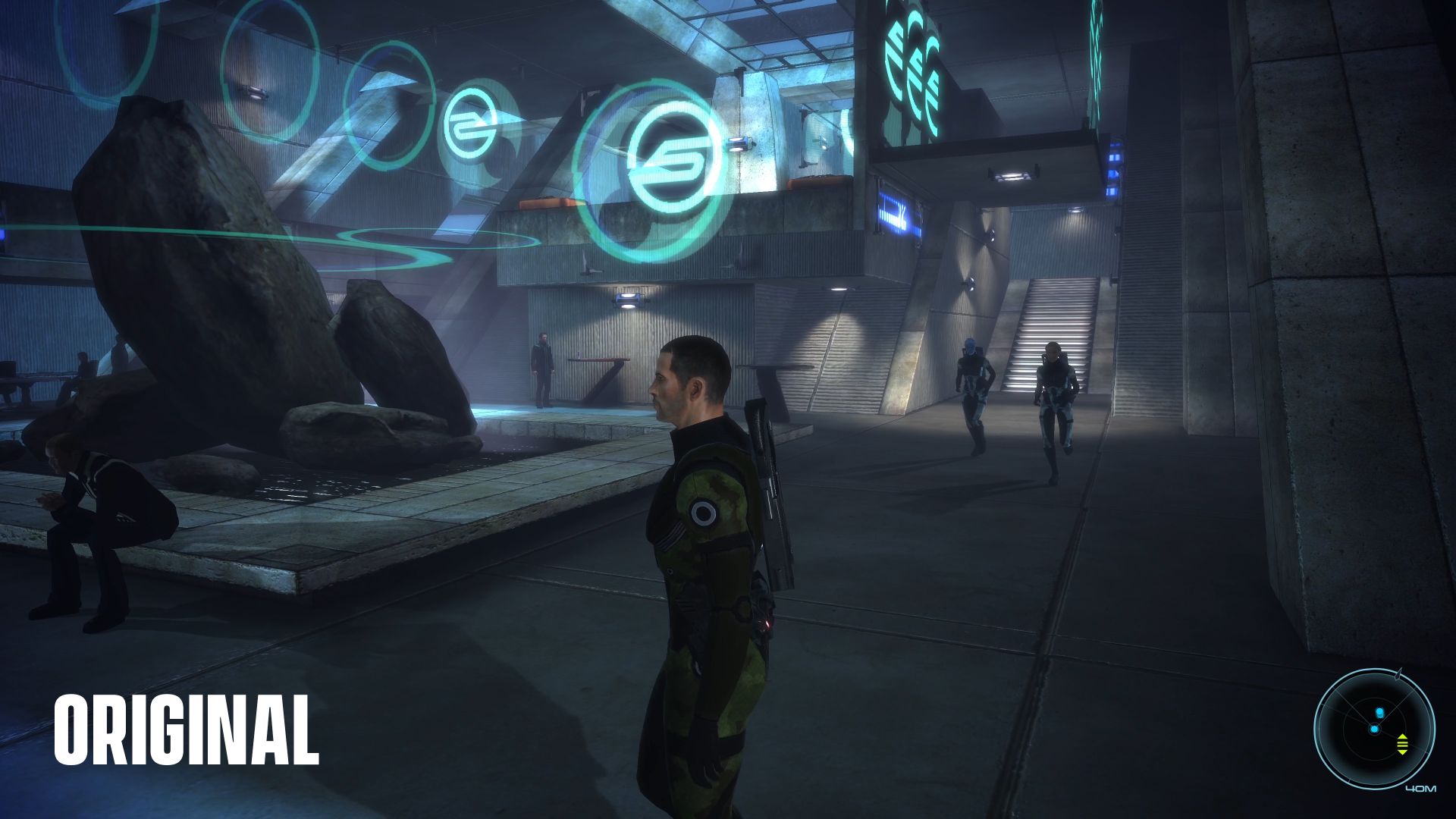 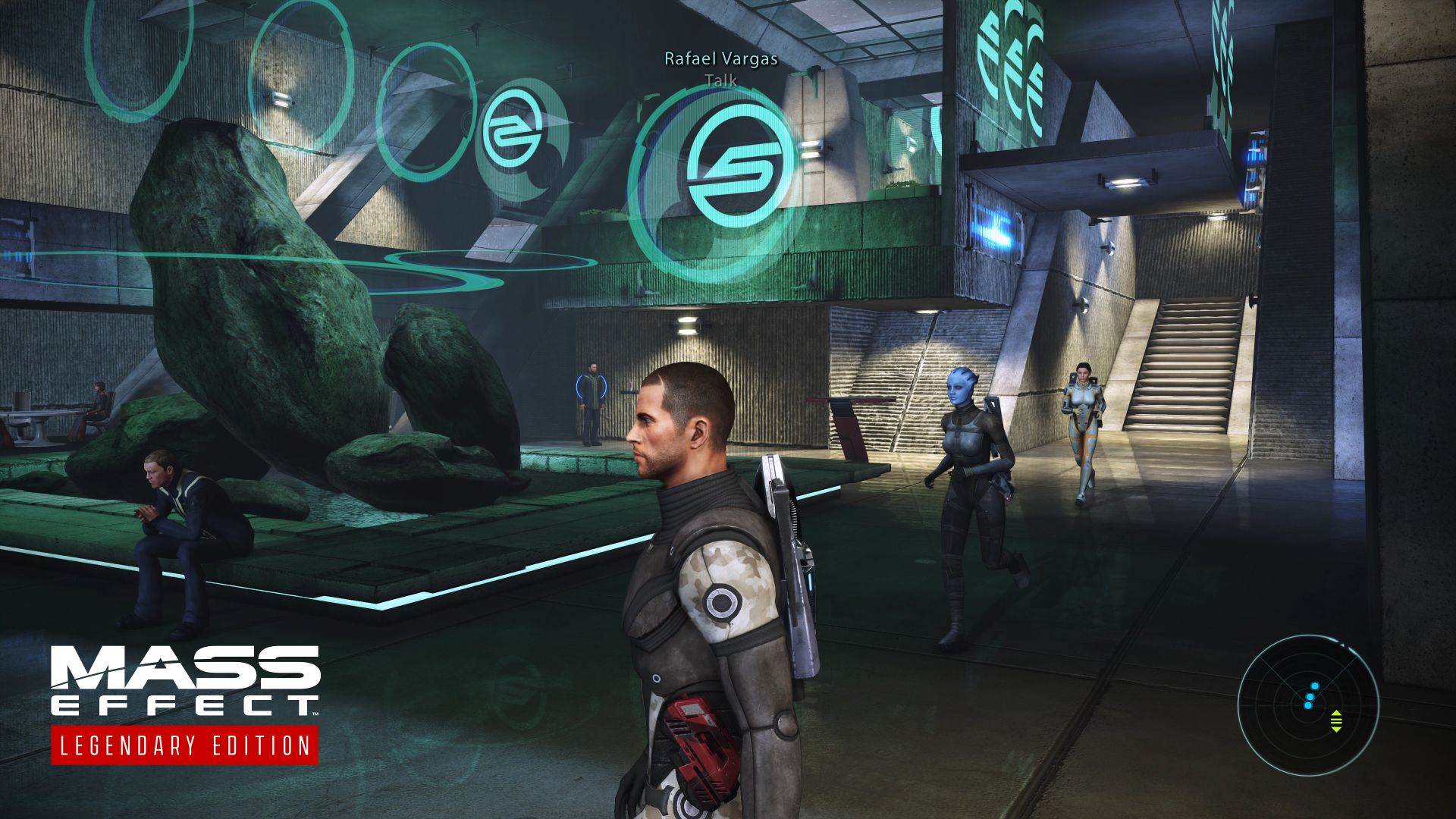 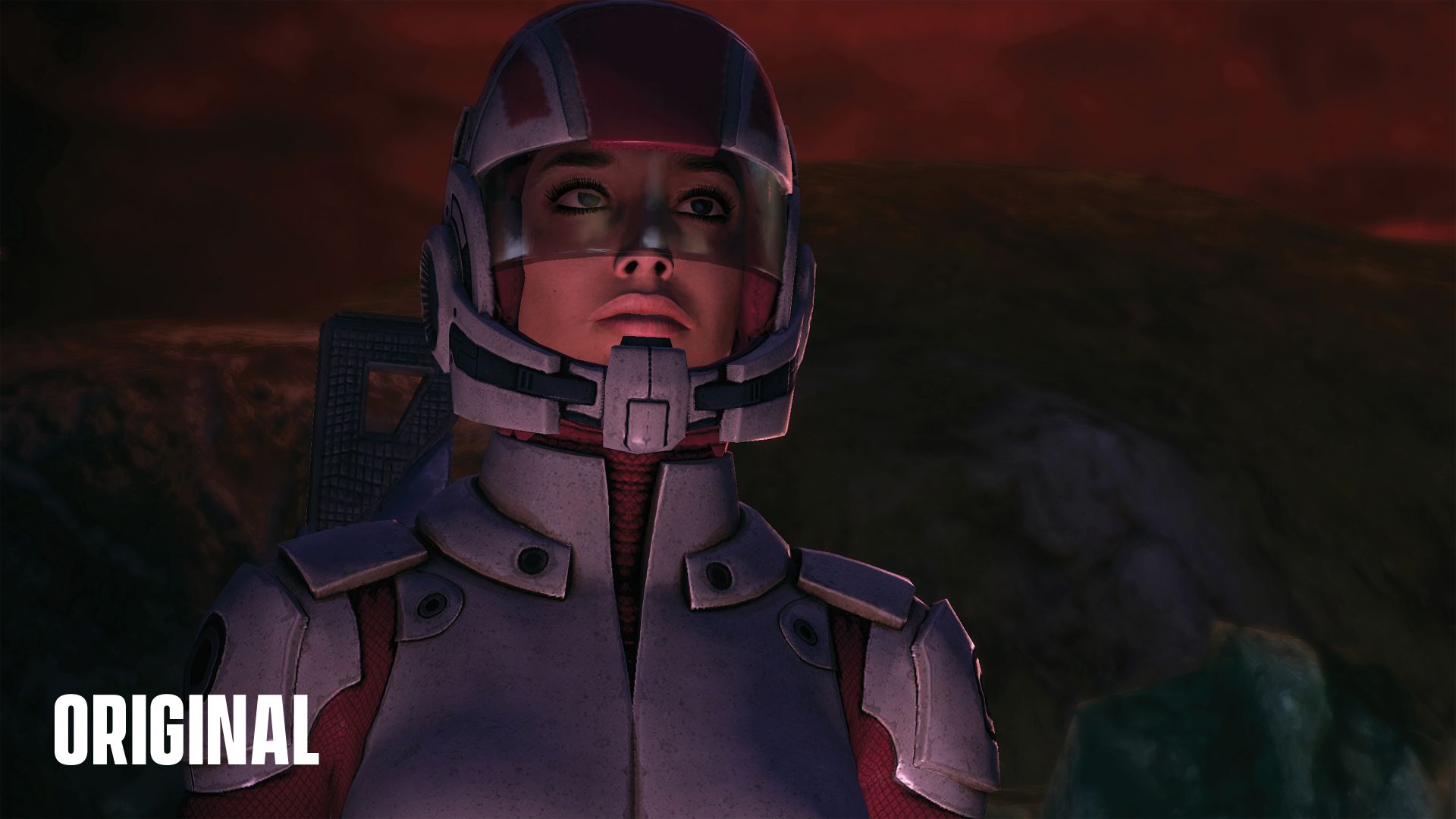 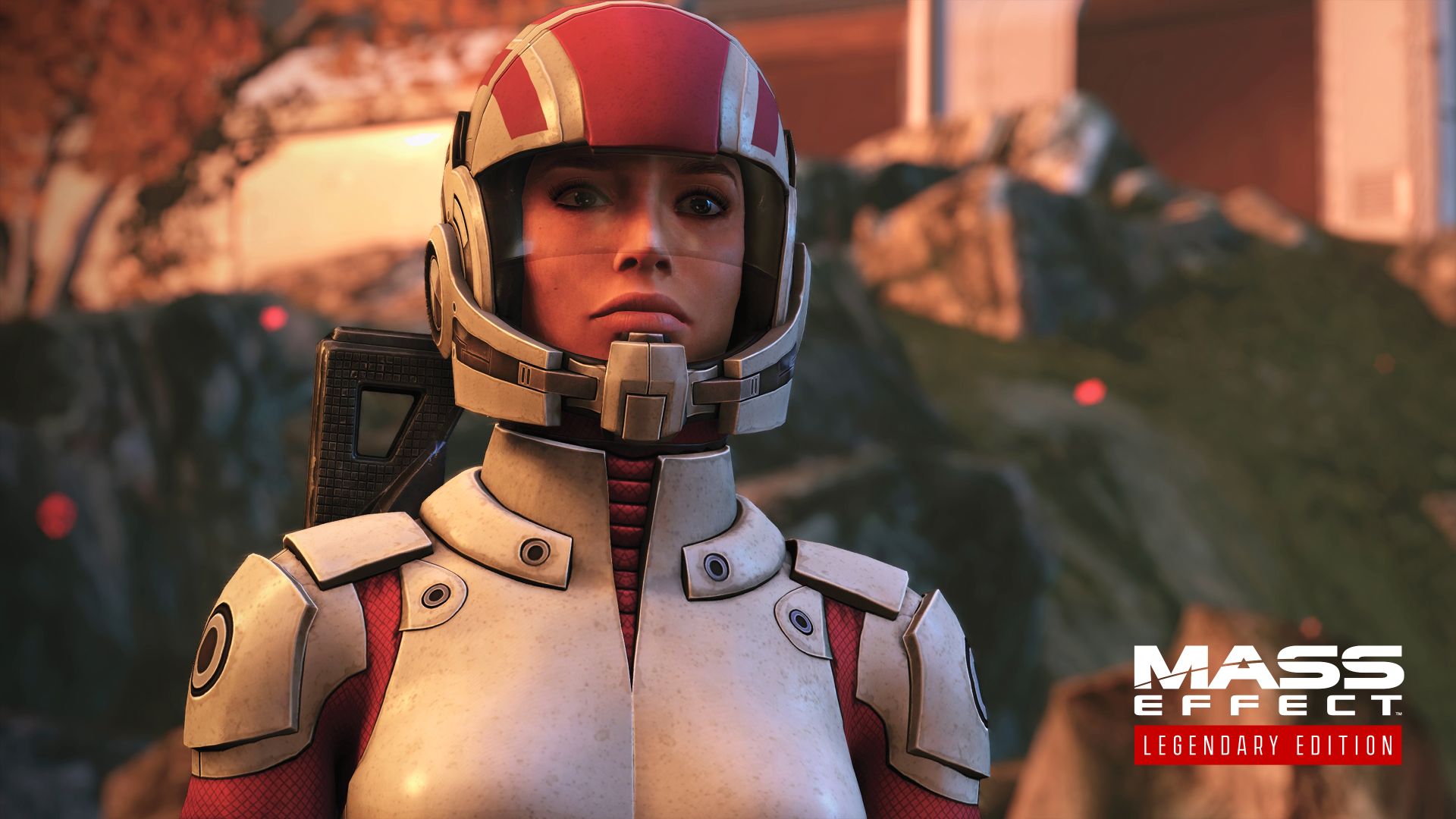