Magnasanti is one of the largest and most perfectly functioning cities in SimCity games’ history, yet it’s inspired by one of the world’s most monstrous settlements.

People have a more or less clear idea of what the perfect city should be. Wide streets, extensive gardens and public services within easy reach of citizens, providing all the amenities possible to its inhabitants. Perhaps surprisingly, none of this is reflected in what SimCity means by perfection.

It seems that a gamer has managed to condense the potential of a city simulator into a single perfect municipality. However, no one in their right mind would want to live in such a city.

Vincent Ocasla’s project was not about setting a world record or using SimCity 3000 to demonstrate his level of urban planning skills, but about showing the extent to which the elite can control the population to achieve a goal. The goal, in this case, is to create the “perfect” city.

In terms of gameplay, the idea of the perfect city in SimCity is as simple as reaching a point where the game operates autonomously. Citizen births offset deaths, tax revenues offset maintenance costs, and as many people occupy every square inch of the map as possible. This perfect result can run in a loop for thousands of years, which, as Ocasla himself admitted in an interview, was not without its problems for virtual residents. Perfection, at least, in this case, is paid for with sloppiness and totality.

“Population growth is stagnating. Sims don’t have to commute long distances to work. Indeed, they don’t even have to leave the block where they live. They always go to the same place.”

Magnasanti, as the city is called, is a pit of despair in which police control compensates for any sign of crime or rebellion by residents.

There are no schools, colossal unemployment, no fire brigade, no school, no hospital. Still, by the time its inhabitants are old enough to arm themselves against the rulers, the citizens are dead anyway due to short life expectancy.

What’s strangest about Magnasanti is that, despite its brutality, there is an even more devastating real-world example that inspired its creator. As a cradle of crime and drugs from the 1950s to the 1990s, a city became the most densely populated place per square metre in the history of our planet: 1 255 000 inhabitants per square kilometre.

Founded in the 10th century, the walled city of Kowloon only came to the fore when the Japanese occupation ended in 1945. Chinese refugees settled there, taking advantage of British control of the area. The large population and limited space led to uncontrolled construction, and carelessness soon made the town a hotbed of trouble. 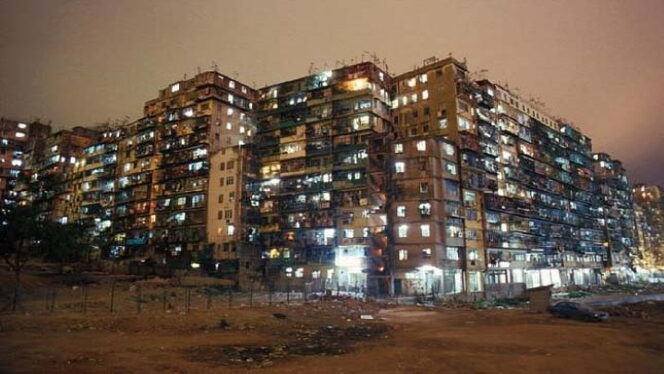 Drugs, prostitution and gambling dens sprawled among the dilapidated shacks and ramshackle buildings of the slums, which grew in number and height. The Triads took control, but conditions were so bad that the lower parts of the city were no longer even bathed in sunlight. With each new storey, Kowloon’s walled settlement became increasingly known as the City of Darkness.

Unlicensed doctors performed surgeries, nearly 2,000 kilos of drugs were seized, and children’s playgrounds gave way to drug addicts and brothels at night. The situation in the city became untenable, with the police not even daring to enter; when the government decided to take action as a last resort.

After announcing the intention to demolish the city in 1987, it was not until 1993 that work could begin, and it took more than a year. Kowloon’s walled city became a park, and its suffocating streets became part of pop culture: they inspired dystopian, cyberpunk cities and, as it turned out, the ‘perfect’ SimCity.