The Japanese studio may have gotten hold of a development kit (aka devkit) from Sony because it looks like Kojima Productions is looking into virtual reality.

According to a Twitter account called Oops Leaks (confirmed by several more knowledgeable insiders recently), “Kojima Productions got PSVR2 prototypes back in November 2021. According to the unconfirmed information that I’ve got, the studio’s upcoming smaller project could be a VR game/experience in collaboration with award-winning Virtual Reality expert and storyteller Céline Tricart.” Tricart is an award-winning VR professional and storyteller, so the studio could be on the right track if all this is true.

Hideo Kojima revealed late last year that he was working on two projects. One will be a more significant title (Death Stranding 2? Silent Hill?), while the other he called a new challenge, later describing it on Twitter as a more radical experiment. And virtual reality could indeed be a new challenge for the Japanese genius, and the radical idea isn’t that far away from Sony’s new VR headset (which we still don’t know when it’s coming, but we’ve written about rumours that it’s coming to stores this year).

And Kojima and Tricart are not an unknown pairing. They’ve worked together before, as they were on the jury for the VR entries at the Venice Film Festival, so there’s already a connection between the two that could be reignited at any time. Oh, and Kojima has previously emphasised that he’s keen to experiment with virtual reality, which could be a good use of Sony’s new hardware (and with Death Stranding first coming out on PlayStation 4, and its extended Director’s Cut edition aimed at PlayStation 5, the “blues” could throw some devkits at his team!)

We don’t know what will come of this yet, so we’ll end with the usual refrain: it’s all unofficial. 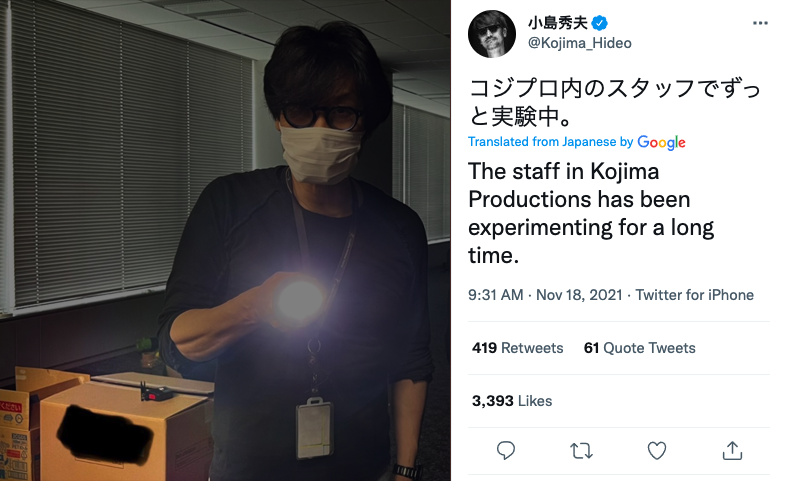