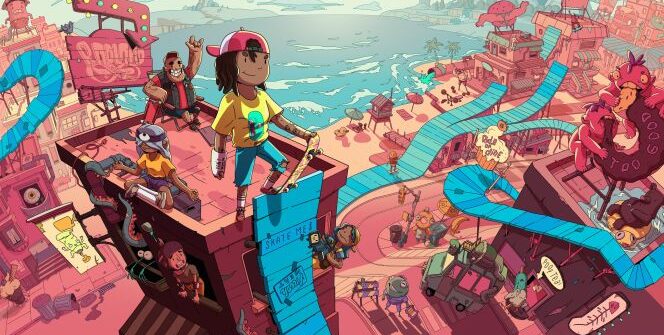 REVIEW – OlliOlli is now at its third instalment, and as expected, it’s a skateboarding game, where after the tricks, the landing is essential because it’s not so good to kiss the floor in a heavy bail. Private Division has released a refreshing game ahead of the plethora of significant releases coming out in late February.

Roll7 couldn’t get away from number five either (because after Serious Sam: Siberian Mayhem, there are that many worlds in the game here…). 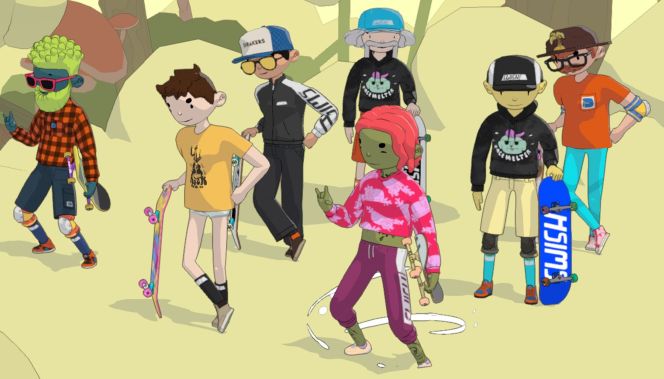 Compared to the first two OlliOlli (the name of the game refers to the ollie move: if you can jump into the air on your board without using your hands, that’s the trick) games, the visuals have changed dramatically, and I think they’re better. In the first part, we got a clean, pixelated look. In the sequel, we got a vector look, but now we can ride around Radlandia’s world in a hand-drawn style that evokes the atmosphere of a dream book. Admittedly, the artwork is inspired by comic books and Jet Set Radio, and it’s a nice touch. The cel-shaded style also gives an almost cosy warmth that spills over into the story (i.e. we can sit back and nod in satisfaction). There are five skateboarding gods. Someone in Radlandia represents them. They’re looking for a new member, and we’re nicely creating our character, who can become a more seriously customizable figure over time. What makes it worse is that while the tons of items (there are tons on the levels, no joke) are good, the interface has perhaps become trite.

Perhaps a negative of OlliOlli World can be defined as the change in the difficulty, at least the entry-level I feel Roll7 pushed down. You land your tricks automatically, so in the scenario where you don’t press the button in time, you’ll land on the concrete – it’s no longer part of the gameplay. While the game is two-dimensional (and not as extremely basic as the Game Boy Color port of Tony Hawk’s Pro Skater and its sequel), it’s not easy to master every move. For example, there’s the wallride, which will set us in a different direction in the air if, for example, we started wall riding after grinding on a pipe beforehand. Quarter pipes are a 2D way of reversing the trajectory because you jump into the air, and whoosh, you start going the other way. There are also more challenging routes (Gnarly), making for a more difficult course section. And yet, even if you know the previous two games (you can use the right analogue stick to get those grab moves on the table), you shouldn’t be discouraged. There will be sections where perfect timing and sequence of moves are required to succeed. If not, you will fall into the never-ending darkness below, and believe me, that can happen quite quickly. So the third title in the OlliOlli series is no child’s play. And that’s a good thing. It shouldn’t be completed that efficiently. 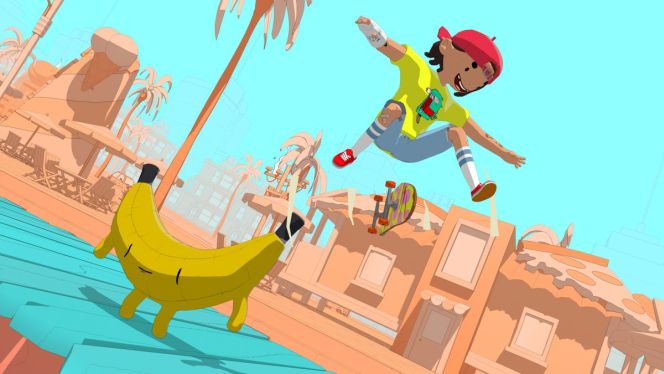 Flow, in my interpretation, is when something inside you switches gears, and you get into a rhythm that lets you shut out the outside world and do what you need to do. It’s common for more creative minds (I’m an artist, so I can say I’m speaking from experience) to come up with a concept in a short period. Now, that’s what it takes to beat OlliOlli World, which can be relentlessly punishing at times when it suddenly pulls the skateboard out from under us and doesn’t hesitate to laugh in our faces. You need the flow to get into the rhythm you need, and then you’re doing a dynamic dance on the track that’s a joy to experience, a pleasure to look back on, and a joy to think about afterwards.

Once you have that state, you can beat the set scores, Mike’s challenges (three per track, e.g. do certain tricks; do tricks in certain places; follow specific paths), and different collectables on the tracks. Achieving this state, which could be called an ascension if you think about it, will also be helped by the soundtrack, which you should let settle in you. Then, the in-game ascension will happen, leading you to the Gnarvana League. It is a league of challenging courses and chasing after scoreboard placings and let’s not forget about the portal, where you can find shareable levels.

Go with the flow

The effect of the flow came down to the fact that I’d written the first two “parts” once without saving, but the CTRL+S combination froze everything, which led me to reboot, so I nicely moved the keyboard to another USB port. But aside from that unfortunate event, I think this game deserves a nine out of then. Is it a high score? Perhaps it is. But since THPS2-3-4 on PS1 was a serious part of my childhood (and I could play these at any time, even half asleep), there’s a bit of a bias. But OlliOlli World is a great game, and there’s no denying that. It’s a relaxing game (the last time I spent time with something like that was probably Tetris Effect: Connected), but it can still require some serious effort. So it turned out well, very well. To hell with the AAA games and the blockbusters, as most of them don’t stick with us. Those blockbusters don’t dare to be revolutionary. Neither does this game, but it’s just an escape from a hopeless world. It’s perfect at that.

+ Easier to start compared to the first two instalments
+ The atmosphere is captivating
+ If you get the flow, you get everything…

– …but if you fall out of it, you’re in for some serious trouble!
– Suddenly tricky at times, a bit “spiky”
– The customization UI is… shoddy?

REVIEW - OlliOlli is now at its third instalment, and as expected, it's a skateboarding game, where after the tricks, the landing is essential because it's not so good to kiss the floor in a heavy bail. Private Division has released a refreshing game ahead of the plethora of significant releases coming out in late February.     Roll7 couldn't get away from number five either (because after Serious Sam: Siberian Mayhem, there are that many worlds in the game here...).     Graphic evolution   Compared to the first two OlliOlli (the name of the game refers to the…
OlliOlli World – Skate’n’fail
OlliOlli World – Skate’n’fail
V
Why should I care about [insert any AAA game here]? Give this game a round of applause!

Why should I care about [insert any AAA game here]? Give this game a round of applause!