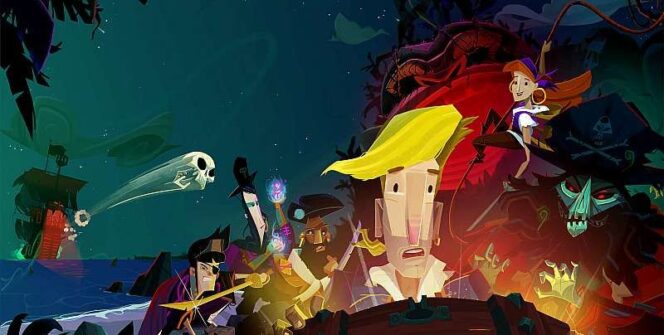 REVIEW – After thirty-two years, Monkey Island is back! Ron Gilbert takes up the reins of the cult saga once again with Return to Monkey Island, this year’s ingenious sequel to the adventures of Guybrush Threepwood. No spoilers in our test!

Thirty-two: that’s the number of years between the very first episode of Monkey Island and the third, which no one expected to see the light of day; not even co-creator Ron Gilbert, who for a decade has been literally begging the wary Disney to sell him his own beloved license, which came to the mickey-monster via Lucasfilm. Then he was finally asked to do the real sequel to the second episode, which he finished with a massive twist before bidding LucasArts farewell.

Now, the adventure game developer goddess has refused to let her creative freedom be limited: “It was essential to me that if I was going to make this game, I had to do everything the way I wanted to do it.” Together with Dave Grossman, the other writer, and a newcomer, Rex Crowle (the project’s art director), they created Return to Monkey Island. 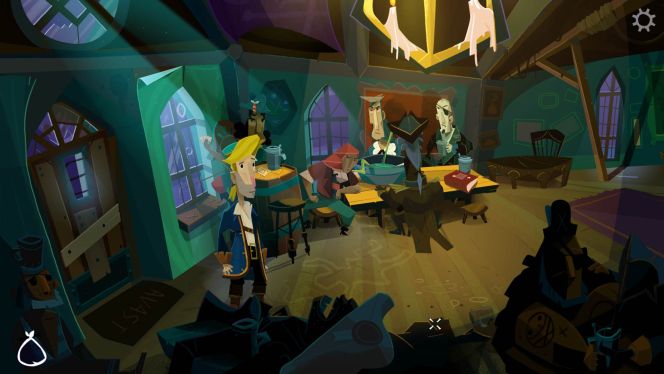 “I am Guybrush Threepwood, the fearless pirate!”

Since Guybrush uttered those first words in 1990, nothing has changed. LeChuck remains a loyal adversary, and Elaine is a wonderful woman turned loving wife, and Melée’s Island is still the starting point for an epic of humour and anachronisms. Ottis, Stan, the cook, and the voodoo witch are all present in the island town, whose colours come straight from the Secret of Monkey Island palette.

There are winking and barely veiled references in almost every corner of the island to satisfy the needs of fans who have been nostalgic for decades and to bring a gentle smile to their faces. Although a small album-like ‘reminiscence’ section in the menu offers a little context for past adventures, it must be admitted that newcomers will be legitimately a little confused. Therefore, it would be wiser to finish the 2011 remakes of the first two (excellent) games (or even the original), which are magical by today’s standards, before starting this one. 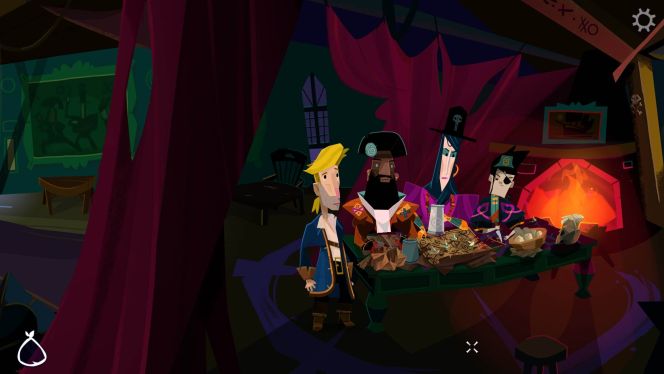 The music is still magical, but Tearaway’s graphic designer has divided fans

Adding to the nostalgia maxed out are the three original composers, Clint Bajakian, Michael Land and Peter McConnell, who have returned to fulfill a simple instruction from Gilbert: “Make Monkey Island music.” The composers have fulfilled the simple yet complex request with brilliant precision, as the tunes evoke fond memories and give body to the story (which is taken straight to the top by the excellent synchronised voices). Most of them are played by musicians or orchestras and live.

Return to Monkey Island is a thrilling and funny adventure with absurd situations and a great pace from start to finish, so if you like this style, you won’t get bored for a moment. In addition, the new title does not get bogged down in fan service and opens up to a more original story, while sacrificing nostalgia. You’ll get your share of quirky new characters to meet, who are set apart from the old by a great story that’s at once wry, clever and chuckle-worthy.

However, one thing has changed a lot: the art direction. Sure, it would have been unthinkable for the creators to go back to the pixel rendering of the 1990s, but even the look of 2011 remaster of the first episodes is a bit dated by today’s standards. In this respect, the graphical evolution of Return to Monkey Island seems perfectly logical, even natural. Some will recognise the unique signature of Rex Crowle, who worked on the PS Vita and then PS4 Tearaway. It’s a wise choice, not only because it takes the license in a modern direction but also because it respects the unique feel of the saga. So naturally, the change is so drastic that it’s unlikely to be unanimous.

Of course, many didn’t like the new style from the moment it was announced and expressed their displeasure, but as Gilbert said a few days before the launch, “you can’t make something that everyone likes, it’s impossible”. 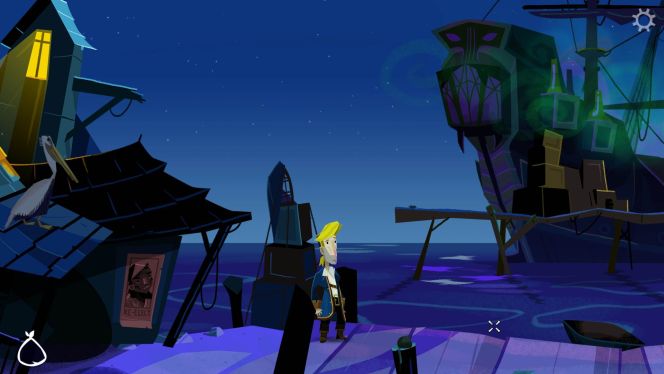 If you burp well, you win the puffer fish

In addition to the visual world, which has always been close to cartoons, the difficulty level has been made more “family friendly” this time. In normal mode, the puzzles are designed for a relatively novice audience and are too easy for those used to the genre, who are more likely to prefer the hard mode.

The latter mode is more challenging in terms of puzzles and thus logic puzzles and offers an entirely different experience that we can only recommend to everyone. The complexity of the puzzles follows the progression curve nicely, although it seems to be a bit easier than the previous ones. Chances are that the player will not get stuck stumbling around on the more difficult levels, thanks to a very clever hint system that works in several stages: if this little “hint” is not enough, here is another, stronger hint, and so on.

In general, the adventure has clear objectives, which are achieved through puzzles that not only move the story forward but also have real meaning in their solutions, even if they often (true to the series’ style) sometimes serve up some quite outlandish tasks (which we love): in one mission, for example, you have to complete a burping contest to win a puffer fish. 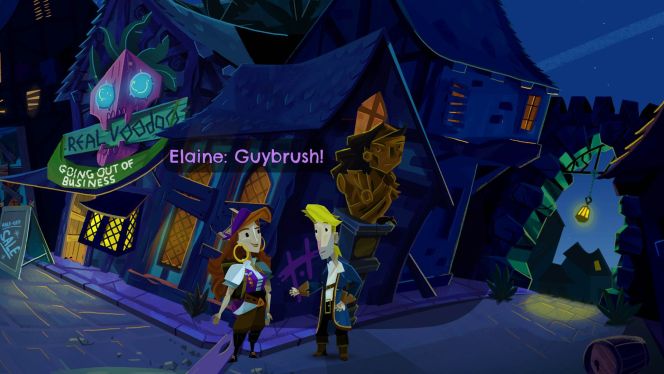 Frustrations are a thing of the past

The game also spares you the classic point’n’click annoyances: the unlikely combinations you have to make in your inventory before you find the right one. In this section, you can avoid annoying “uh… I don’t think that works” dialogues, thanks to a variable crosshair icon that predicts whether or not an item can be used with another.

It should be noted that the controls are just as pleasant with the controller, with the developers really taking care to deliver an excellent experience on Nintendo Switch (currently the only other platform Return to Monkey Island has been released for, alongside PC); the character moves with the stick controller, making it easy to interact with the environment. The controls are also minimalist, with the player simply left- and right-clicking the mouse to perform predefined actions. This is a pleasant surprise, as a point’n’click adventure is usually not an easy task to control with a controller.

In this sense, player comfort and lack of frustration are among the priorities of this ergonomic experience, which eliminates the tedious classic mouse control of previous years. As early as 1984, Ron Gilbert supported this claim in “Why Adventure Games Suck?”: “The average American spends most of his days slaving away in the office, the last thing he wants to do is go home and fail while trying to relax and have fun.”

A drastic change in graphic style, everything else is the same

Return to Monkey Island is an adventure that is both fresh and modern, balancing nostalgia and novelty. The graphical style may have changed drastically (and rightly so). However, the Monkey Island saga retains its old, nail-biting charm in this episode, mainly thanks to the still excellent story, chuckle-inducing humour, likeable characters and a truly fantastic soundtrack.

– The new Tearaway graphic style divides gamers
– At first, the game is a bit too easy, even on harder levels
– The ten-hour playing time may be considered short by some

Return to Monkey Island is an adventure that is both fresh and modern, balancing nostalgia and novelty. The graphical style may have changed drastically (and rightly so). However, the Monkey Island saga retains its old, nail-biting charm in this episode, mainly thanks to the still excellent story, chuckle-inducing humour, likeable characters and a truly fantastic soundtrack. 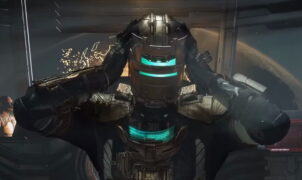