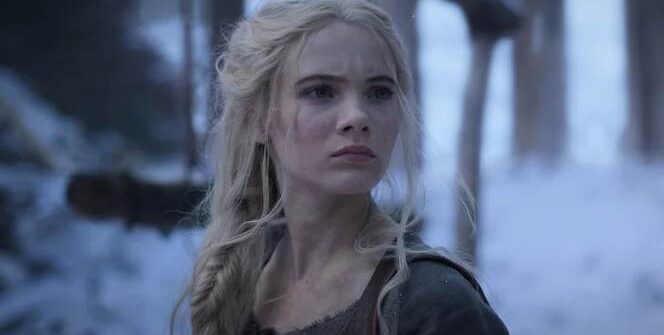 MOVIE NEWS – The young British actress Freya Allan, who plays Ciri in the Netflix series The Witcher, only got this role with great luck, as someone else was originally chosen for her, but now that she has become the charismatic, magical young man of royal descent girl, it seems that Allan’s career has really taken off, as he has just been signed for the latest film of another blockbuster franchise…

This new franchise could take Freya Allan’s already rising career to the top, as she will star in the new Planet of the Apes movie. The Witcher star will play the human lead, while Owen Teague will play the ape lead.

There’s another update on 20th Century Studios’ new Planet of the Apes reboot. According to Deadline, the film will be titled Kingdom of the Planet of the Apes, as previously rumored, and Freya Allan and Peter Macon will join the cast. The film begins shooting next month under the direction of Wes Ball, the director of The Maze Runner.

Previously, Movieweb had already reported that Owen Teague had been signed for the lead role. That is, for the role of the main character ape, who some sites have identified as Cornelius, son of Caesar, while others have not. Teague is known for his role as Patrick Hockstetter in the 2017 film This and the 2019 film This: Chapter Two. He also appeared in another Stephen King project, playing Harold Lauder in the 2020 adaptation of The Stand.

Allan will play the human lead in the reboot, which took some time to cast. Allan auditioned several times, including a final audition before Ball, when he was looking for venues, and turned down several other rising stars. Allan’s breakthrough role was Princess Ciri in the Netflix series The Witcher. He also starred in Gunpowder Milkshake and the upcoming indie drama Baghead.

It is not yet known who Macon will play and whether he will play as an ape or a human. Macon’s previous roles include Deputy Commander Bortus on The Orville and Preston Lloyd on Family Guy, both created by Seth McFarlen. He also had a recurring role on Shameless as Sergeant Luther Winslow. The past and the future

“Planet of the Apes is one of the most iconic and historic sci-fi franchises in film history and an indelible part of our studio’s legacy. With the Kingdom of Planet of the Apes, we feel privileged to continue the series’ tradition of imaginative, thought-provoking cinema, and we look forward to 2024 , we will be able to share Wes’ extraordinary vision for this new chapter with audiences,” said Steve Asbell, President of 20th Century Studios.

Planet of the Apes is one of 20th Century Studios’ most popular and enduring franchises, grossing over $1.7 billion worldwide. The very first film, based on Pierre Boulle’s novel and screenplay by Rod Serling, was released in 1968 by the then 20th Century Fox. The film became one of the year’s biggest hits and even won a separate Oscar.

The film was followed by four sequels, most of which starred Roddy McDowall and two TV series. Tim Burton directed the 2001 remake. Starring Helena Bonah Carter (surprise, surprise) and Mark Wahlberg. Director Rupert Wyatt rebooted the franchise in 2011 with Rise of the Planet of the Apes, starring Andy Serkis as the ape protagonist Caesar, a role he played in two sequels directed by Matt Reeves.

While we already know the title of the film and who the main characters will be, the plot of Kingdom of the Planet of the Apes. For example, whether there will be another remake of the original film, the seeds of which have already been planted in films starring Serkis. Since filming hasn’t started yet, it looks like we won’t know for sure for a while.

Spread the love
Tweet
Tagged Freya AllanPlanet of the Apes