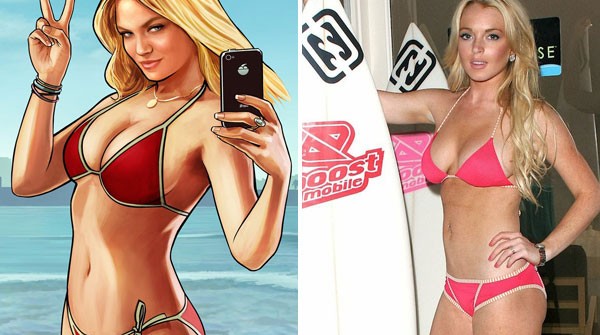 OPINION – We investigated as to what is happening between Grand Theft Auto V and Lindsay Lohan. Why Lohan thinks that she can sue Rockstar for a few million dollars? This is going to be an interesting story! Kate Upton: the similarity is incredible, but the pretty actress had nothing to do with the artwork.

The story began back around 2012 when the game’s first artworks were released to the gaming community. On the picture, there is a woman in a red bikini, and a lot of people thought it was based on Kate Upton due to the similar picture below.

As neither Kate Upton nor Rockstar declined to comment on this story, so the fans dropped the story altogether. Shelby Welinder: the original model, who proved the shooting sessions with a scan of her contract uploaded to twitter.

And for a reason: in 2013 we learned that the real model for the character was Shelby Welinder, who even released her contract with Rockstar. Plus a few Twitter comments were also re-tweeted where she mentioned: Another day, another few dollars” when the picture was taken

The case at this point should have been shut, but Lindsay Lohan got pissed off and decided to sue Rockstar, as according to her „the character of the picture which is Lacey Jonas in the game” was based on her.

Well, Lohan is right that there is a Lacey Jones character in the game, who is a B category actress, who has to be driven home to her house, and avoid the paparazzi. Those are not the bikini girls, you are looking for!

The only point where both the character, and Lohan is similar is that both of them are B category actresses

However where Lohan is wrong is that the bikini artwork – is really like her – but as mentioned above, not even based on her, and the most important part is that the picture does not even show Lacey Jones! The girl is just a „Pin-Up Girl” that is used in marketing materials – just like the lollipop girl in GTA IV, and the other girl from San Andreas: neither of them would be in the game. Are you still there? Still paying attention to the story?

So who was the Lacey Jones artwork based off? As there were artworks such as that, and who was Lacey Jones based off of.

Well if you search for the Lacey Jones name in Google as me, with mistyping a word, you’ll find a real hotty Lacey Jones, who looks really like the girl on the artwork (although not 100%). One word mistypes and you can see that there is a similarity between the two and gives more validity to a case between these two than Lohan.

In the end: If anyone has a similarity to a GTA V character it is definitely not Lindsay Lohan.

And how the story ends? “Justice” prevails? That’s how Linsday Lohan looks at court. This wasn’t about the grand theft of autos, but her own: she stole $2500 worth of jewelry.

The story (and the lawsuit) doesn’t just end here: the New York Supreme Court did not decide in Rockstar’s favor. Lindsay Lohan is allowed to proceed with her lawsuit. However, Take-Two reacted to it by sanctioning her and her team of lawyers, stating that this is simply just a case of seeking attention and no more.

New York Supreme Court judge Joan Kennedy wrote that she must make all inferences in Lohan’s favor at this stage. She cannot rely upon defendants’ documents aiming to show the images in question don’t show Lohan and ruled that the actress’ statements in her pleading had sufficiently alleged causes of action to merit a denial of the dismissal motion. Kennedy also rejected Take-Two’s argument that Lohan had brought her lawsuit too late.