The Council – Episode 3: Ripples – Demons On The Island REVIEW – The Council expressed with the third chapter as well that it can easily strangle the Telltale’s monopoly’s neck. This time, there are some mistakes that I have to express, which drops the rating down a little bit from its deserved location but I’m still staunchly saying that The Council could become a serious game.

I had some issues putting together my opinion for the second episode, but that is not the case with the third one. In fact, I forgot two things that are, luckily, still present in Ripples, the third episode. One issue is that one of our traits is still having a massive typo. Since when is the word „honest” written with two N-s, dear Big Bad Wolf? Also, the lighting seemed to make some characters emit light from their MOUTH, which was quite a bizarre sight. I wish I were joking, but I’m not. 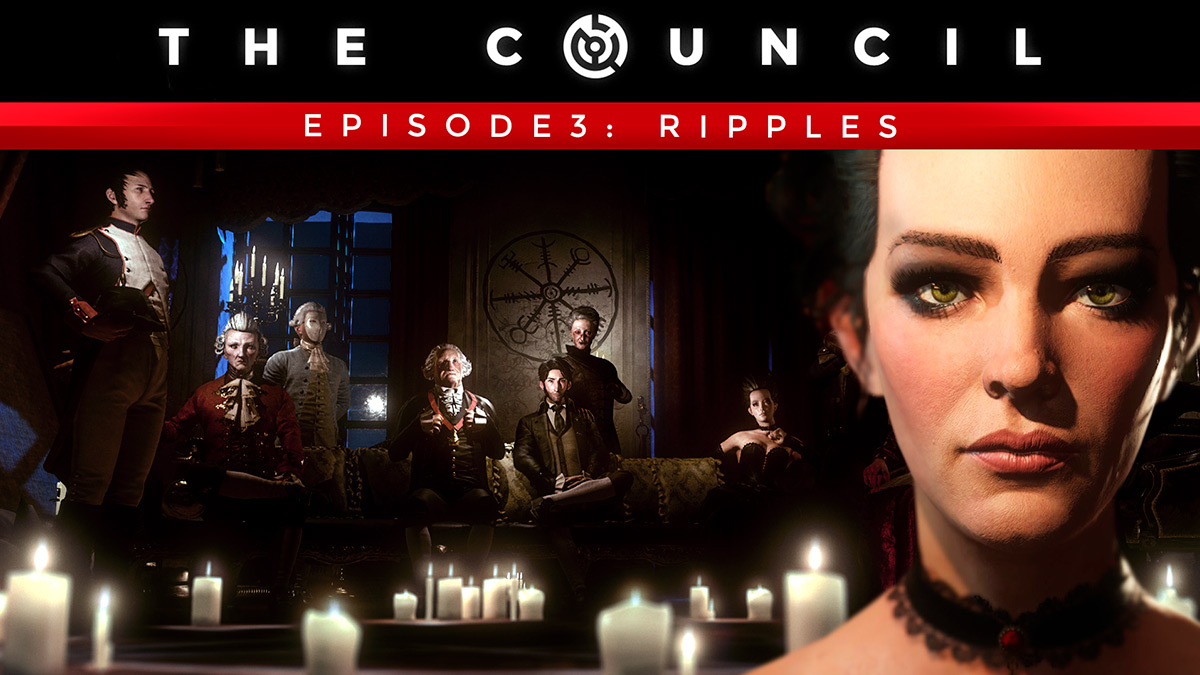 We start out in the crypt, and I do have to quickly point out that you will have to go through the garden’s hedge maze at least three times this episode. Oh, for the love of God… anyway, the first half of this chapter consists of Lord Mortimer’s conference where you will stand in for your mother, who seems to have changed (it is going to be a recurring thing throughout Ripples). On the conference, Manuel Godoy, the then-Prime Minister of Spain, will play a pivotal role, and the subject will be a continent where one country would see a significant expansion (and its leader would only hear the idea the moment Mortimer announces it!), another country would staunchly oppose the plan, and the… well, maybe it’s not a major spoiler, the French team (remember, you, Napoleon, and Perú are all from that country) would be surprised. The conferences have to end with a unanimous vote, which would not happen this time. Even the two ceremony masters have different sides, which will be one of the significant decisions you have to make, too.

You’ll also have to get involved with a character to pick a side, and you might even run into other people, too, possibly causing a confrontation here and there (and one of them will be with Prussia’s Von Wöllner). There will also be problems with twins (I can’t describe it without spoiling, seriously…), and you’ll end up with your mother again, who will flip your concept and thoughts about the island and the meeting on their heads. Scroll back, read the title. I’ll help two. No more help from me than that. Then you get some retrieval mission, which is somewhat of a tiresome task, then a puzzle follows, which, in my opinion, is outstanding. After solving it, the episode ended for me. 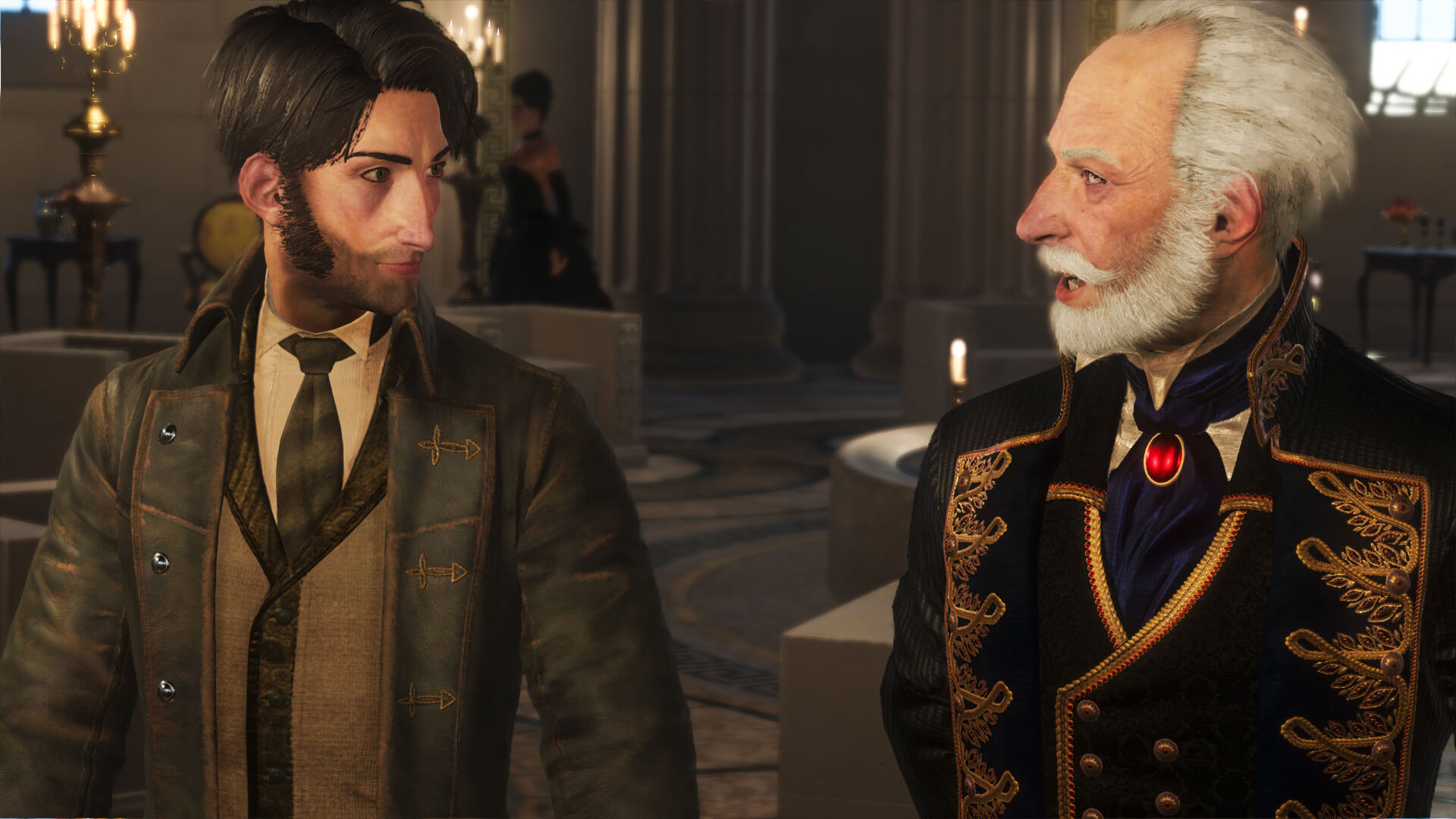 Louis de Richet won’t get out of this episode in one piece. Some family issues will be followed by a political argument, as well as a series of events around the Duchess. The result is excellent, but I have a few issues. First off, I felt that the episode was quite packed for its length. The developers dump a ton of information on you, and your relationship might change with a ton of characters, making you feel like „getting lost” in the sea of events. Although now that I think of it, Big Bad Wolf and Focus Home Interactive might have made me wait for the fourth chapter. The graphics are alright, but there’s the lighting issue that I mentioned before. At a few points, the animations also „jump,” and I still see some stupid differences in the subtitles. In fact, towards the end of the episode, the subtitles will show something way different what the voice acting says. Five objects versus six, and 6646 is said as the code instead of 6466 in the captions. Also, the dialogue window jumps up too early at a few points, which means if you pick an option while the voice line is still playing, you’ll overlap your selected event over the first one. Please, don’t slip up on such stupid mistakes!!!

Although the third episode is getting a lower score than the second one, it doesn’t mean that Ripples is WEAKER than Hide and Seek. However, if the developers have some ridiculous mistakes left in the game, they’ll cause trouble for themselves. The audio is fine (aside from the overlapping), the graphics are okay, but the story is the best. There’s not much of a puzzle here, though, and the episode could be a little more „breathing” than what it is, but The Council‘s middle still deserves an 8 out of 10. I’m eagerly waiting for the fourth episode, which should be out by the end of September.

+ The story continues to improve
+ I think the replayability is guaranteed by this point
+ A few characters start to open up for you, but there are still secrets

– The dialogue error with the overlapping speech files
– Subtitle flaws, with serious differences from the audio at a few points
– The characters’ mouths seem to emit light here and there

REVIEW - The Council expressed with the third chapter as well that it can easily strangle the Telltale's monopoly's neck. This time, there are some mistakes that I have to express, which drops the rating down a little bit from its deserved location but I'm still staunchly saying that The Council could become a serious game.   I had some issues putting together my opinion for the second episode, but that is not the case with the third one. In fact, I forgot two things that are, luckily, still present in Ripples, the third episode. One issue is that one…
The Council – Episode 3: Ripples – Demons On The Island
The Council – Episode 3: Ripples – Demons On The Island
V
We have taken a demonic turn.

We have taken a demonic turn.