REVIEW – The Ace Combat franchise is back after a long rest from the gaming world, and now it has gone multiplatform. Rather than be a console exclusive to either console (AC6 was an Xbox 360 exclusive, while the rest of the main games were PS exclusives), it is now available on both consoles and will be available on PC later in February.

With this grand return players all around the world will get to experience the thrills of being an ace pilot, while also staring in your very own action movie. So the people who are looking to experience a simulator, or just simply realism are in for a rude awakening. Welcome to the world of Ace Combat where planes will carry hundreds of missiles, and boss battles are similar to the old Metal Gear Solid games.

The story of Ace Combat 7 takes place in an alternate reality called Strangereal, where there are real-life jets such as the F16, but at the same time, we get flying mech planes called Arsenal Birds. Plus an asteroid was heading towards this world, so in response, the countries built giant railguns to destroy it. Speaking of countries, all of them are entirely fictional, but they are pretty much mirrors of their real-life counterparts. The game does connect to the previous games in small parts, and even as name drops, but you can pretty much jump into Ace Combat 7 without playing the previous games.

It is 2019 and the Osean Federation is attacked by Erusea after nearly a decade of peace. The player takes on the role of Trigger a new member of the Osean Federation Airforce, who after a couple of missions is sent to a penal colony as he made a grave mistake on one of his missions. The story even from the beginning becomes something of a marvel to experience. It is full on schlock, not in a bad way, but it does feel like a Japanese anime. From the mysterious enemy ace pilot to the giant mech bird that acts as a boss battle, and to hair raising metal music that goes throughout the game, Ace Combat 7 is just pure 100% fun. Sure it tries to ask some deep questions about the relevancy of fighter pilots in the age of Supercharged drones with AIs, or whether a country is still relevant, but it is paper thin. Not bad, but also not excellent in the long run, however, the moment to moment story beats are great, and the chatter between teammates is well done.

Ace Combat 7: Skies Unknown has a cross progression mentality in terms of its gameplay, as it has both singleplayer and multiplayer components and separate aircraft trees for SP and MP. The player earns points for completing missions or playing in the MP mode. There is also the option to replay completed missions again. These points can be spent on the aircraft skill tree, and luckily there is no split between points earned from MP or SP modes. So if you don’t want to touch the campaign until you unlocked a lot of things you can just go to the Multiplayer. Same goes for the other way around where if you do not want to play MP until you beat the campaign you are free to do that, as anything unlocked during the campaign is also available for the multiplayer.

The campaign is fairly lengthy with its 20 missions, as each mission has its own checkpoints, and can get pretty difficult even on normal. Most missions are the usual: destroy target x, or protect target y, or just simply destroy entire bases. While that might seem boring, the development team spiced up the missions with a few elemental obstacles such as sandstorms, lightning storms, or in one mission where you are up in the mountains to destroy radar sites, but have to keep below the clouds or you’ll get shot down. There is another mission where before protecting a target you have to avoid radar detection. Once again while writing down how the missions feel a bit too similar – in terms of protecting something or destroying something, actually playing the mission is super great, and is never dull. 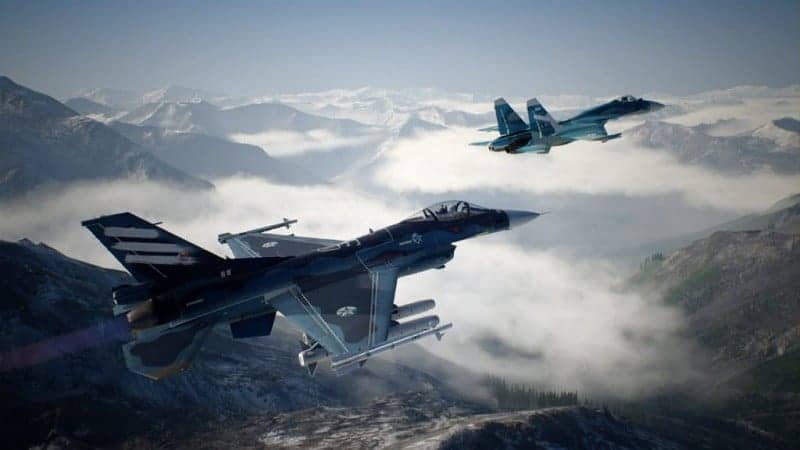 Mostly that is due to how insanely fun the game is when playing it, as the atmosphere is cranked up to eleven on missions. The chatter between your wingmen are superb, hearing the enemy panic when you are close to victory is gratifying. The game provides lots of feedback to what you are actually doing rather than being silent. So in one instance if you are fast enough to take down bombers before they take off your wingmen comment on it.  Unfortunately, though you do not have any way of influencing the squad you are in or the other wingmen, and you will do most of the work during the missions.

Sadly I do find the campaign and the multiplayer a bit lacking in terms of features. The campaign does not have any co-op offline or online. The multiplayer simply consists of Team Deathmatch, and Battle Royale which is just simply a free for all mode. There are not even team-based objective modes from Ace Combat Infinity which is odd as that was a great part of that online only game. Progression is also a bit skewed towards the multiplayer since a battle royale lasts for three minutes and you can get around sixty to seventy thousand points per match, compared to some mission where you might get two hundred thousand points but only after 15-20 minutes of gameplay. Of course, you can always cheese some of the early missions on the singleplayer to farm points.

In the end, both modes are fun to play, but there could have been more effort for both SP and MP for Ace Combat 7. 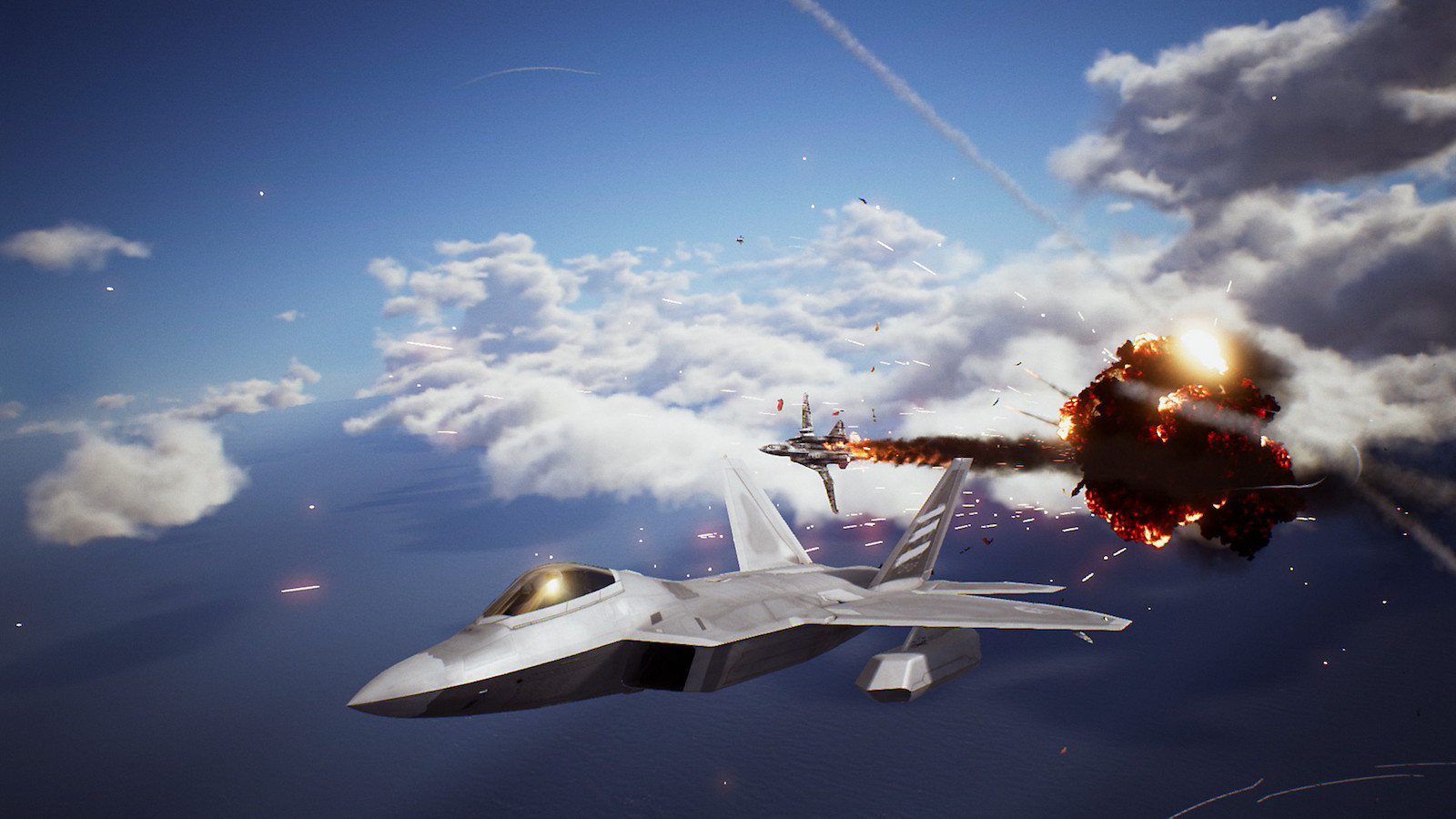 Ace Combat 7 on the PS4 Pro and Xbox One X is simply breathtaking, and the size of each mission and its varied landscapes are shown in great detail. From the cloudy mountains to the stormy canyons and ruined/bombed out cities the game is a marvel to look at. All of the planes are highly detailed, and every smoke/fire is superbly displayed.  If you fight in a sandstorm or in the rain the camera is filled with dust or raindrops, which adds further to the immersion. While everything close is detailed, some aspects are a bit muddy, such as objects up close especially in the city, and some texture filtering is not the best, especially on the Xbox One version of the game. It seems the PS4 Pro version received more optimization from the developers. Besides the occasional blurry texture, and jaggies the game looks stunning, and is a visual treat especially on 4K TV.

The sound design is the best I have heard in years, but the best thing about this series has always been the music, and in Ace Combat 7 it is elevated to new heights. The multiplayer and the singleplayer also utilizes different soundtracks, and the single-player has a bit more cinematic soundtrack while the Multiplayer utilizes a more rock „Top Gun” style music.

A Return to Form

Ace Combat 7: Skies Unknown is an epic return to form, and a great game for those want to experience air combat, but without being a simulator. The best arcade flight game series is back, although with some minor gripes, and surprisingly a bit less feature-rich than the old Ace Combat 6.

REVIEW – The Ace Combat franchise is back after a long rest from the gaming world, and now it has gone multiplatform. Rather than be a console exclusive to either console (AC6 was an Xbox 360 exclusive, while the rest of the main games were PS exclusives), it is now available on both consoles and will be available on PC later in February.   With this grand return players all around the world will get to experience the thrills of being an ace pilot, while also staring in your very own action movie. So the people who are looking to…
Ace Combat 7: Skies Unknown – Aces High
Ace Combat 7: Skies Unknown – Aces High
Dante
A great new game to start the year with, even if it could have done more. Still, it is one of the best games of 2019.

A great new game to start the year with, even if it could have done more. Still, it is one of the best games of 2019.