SERIES REVIEW – April of 2019 seems to be all the rage for zombie related entertainment, so everyone who loves to kill Zs is in for a treat. With Days Gone coming out for the PS4 on the 26th of April, and this week World War Z the video game is out. However, before all of that, we have Black Summer, a stand-alone show from the creators of Z Nation. Z Nation was an antithesis of Walking Dead by being outlandish and being more action-packed rather than focus on human drama. It was shlock but well-produced shlock, but sadly it ended after five years.

Luckily Netflix decided to grab up the creators of the show and decided to greenlight an 8 episode first season of a different type of zombie show called Black Summer. Yet for all the excitement I had for Black Summer due to the two creator’s previous portfolio, it soon eroded once I started watching the show.

Less Budget Then a Shoestring

The problems with Black Summer start with the fact that it seems to have less budget then Z-Nation. It is oddly bizarre that a show supported by Netflix has this much emptiness. Not the oppressive emptiness is shown by movies such as The Road, but instead, it is just too minimalistic for its own good. While it is good that the characters do not monologue, or say grandiose things in the script unlike Rick and his merry band from Walking Dead. However here the characters are just plain boring( since you do not get to know them due to the minimalism of dialogue), or act like quite stupidly and die quickly (ala Game Of Thrones).

There are several main characters of the story, but their interactions are so threadbare that I could only remember them from what they did in the show or their appearance. We had Worried Mother aka Rose (Played by Jamie King), a Bearded Hipster, A Korean Lady who had no subtitles so in the last episode her two-minute heartfelt monologues were not understood by anyone. A Deaf guy who just runs around and I’m surprised did not get killed by a zombie and a Random hobo with a dog who just leaves the plot after five episodes. 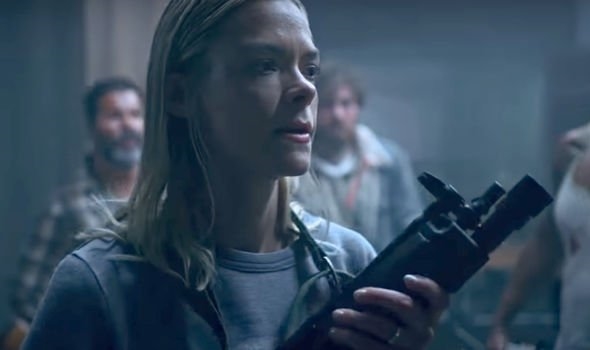 The only main arc of the show is that Worried Mother is trying to find her daughter, and in order to find her she has to get to the Stadium. However, the story is told in disjointed vignettes and title cards. So in a forty-minute episode, you’ll have three or four title cards show up, all showing different timelines and characters. While such methods of storytelling can be effective such as in the movie Dunkirk, here it just becomes a confusing mess. Storylines shift around, and sometimes an episode passes without another character being relevant, only to suddenly pop up later with an entirely different arc.

The budget also has an effect on the zombies themselves. There’s barely any in them, and the first two episodes are mostly just running around in empty streets. After a while, you would get one or two zombies showing up randomly to antagonize our brave heroes. By the end of the show, we get a lot of zombies, but by that point, many people will either give up on the show or fall asleep. The general theme seems to be something similar to 28 Days later but just fails miserably, and the minimalism here does not work out, as there is barely any central character, and you don’t get to know any of the main characters too much.

The cinematography in this movie will feel like as if you are watching a videogame walkthrough of Gears of War. It will constantly show the back of a character either running or standing in the most typical third-person shooter way. If it is not doing that, then the camera will shake violently as if grenades are exploding around our characters. The set design is boring, with no interesting locations, or situations, except in one episode where a primary school is the main set. The zombies are okay, and they reminded me more of the rage virus infected. Yet they were not scary, and the director who handled them just made them comical in most scenes. The show also breaks the rules of infection every time when it is convenient for the plot. The action scenes are mind-numbingly boring and lack punch or tension.

The sound effects for the guns, and for the zombies also lacked any sort of depth. The CGI for the aeroplanes was also horrible, and its sound effects for stock footage.  There were not scary, or terrifying noises, even though the show was trying to be this claustrophobic series. It felt a bit like it was trying too hard.

The final episode of the season for Black Summer is the point where any kind of logic thrown out the window, or anything learned about the rage zombies is forgotten. You have the cast standing out in the open street pumping bullets into infected, and forgetting to aim for the head. This is also done while many ”extras” and ”zombies” are running around if you put the Benny Hill song under it you could have gotten a full blown black comedy. I have no idea where the fun shlock went from the creators after Z-Nation, but by trying to make something serious they ended up with something bland and insulting

In the end, Black Summer is a series I cannot recommend, and it might be 2019s worst TV Series. In fact, the creators might have also realized this, as the last two episodes decided to go from the usual above 30 minutes to 25 minutes and for the last episode, the run time was 20 minutes. Just go watch Z-Nation it’s on Netflix also, at least that had G.R.R Martin as a zombie, and fun action.

SERIES REVIEW – April of 2019 seems to be all the rage for zombie related entertainment, so everyone who loves to kill Zs is in for a treat. With Days Gone coming out for the PS4 on the 26th of April, and this week World War Z the video game is out. However, before all of that, we have Black Summer, a stand-alone show from the creators of Z Nation. Z Nation was an antithesis of Walking Dead by being outlandish and being more action-packed rather than focus on human drama. It was shlock but well-produced shlock, but sadly it…
Black Summer – Z-Grade Walking Dead
Black Summer – Z-Grade Walking Dead
Dante
A horrible attempt to copy The Walking Dead and 28 Days Later – avoid this like the plague. Even World War Z The Movie was better than this.

A horrible attempt to copy The Walking Dead and 28 Days Later – avoid this like the plague. Even World War Z The Movie was better than this.