A Plague Tale: Innocence – Rats In the Walls REVIEW – A Plague Tale: Innocence is Asobo Studios’ first fully developed game after a decade with their last game developed being Fuel. The developers up to this point have been mainly assisting with ports, and their foray into a story driven is a new adventure especially after their racing game from 2009.

Focus Home Interactive is also a publisher that seems to focus on niche titles, and interesting concepts. From Call of Cthulhu, to The Surge, Blood Bowl, and to Vampyr they have a wide catalogue of different games published under them. A true mid-tier game publisher, and can be considered one of the last AA publishing firms. Let’s see if surviving this plague of a product will be worth it.

For King and Rats

The game takes place in 1349 in the Kingdom of France, during which the country is in a war against England, most of the population is suffering from famine, and a mysterious plague makes living in France not the best of times. The player controls fifteen year-year-old Amicia, and also five-year-old Hugo, who are the children of Robert de Rune a noble living in the French countryside. This idyllic life is disturbed when a group of men raid the Manor of the de Rune family and come looking for Hugo.  The raid ends up killing most of the people at the manor including the children’s parents. Amicia and Hugo have to go on the run, as it later turns out that Hugo is pursued by the Inquisition for some unknown reason.

Their journey takes them across villages devasted by the plague, war fronts, and ancient cities. The player mainly controls Amicia who has to stealth her way across France with her brother to find answers about their family’s heritage and to try and stop the plague. The story is a rather simple, but effective telling of the struggles of two children coming to grips with the harsh reality of a brutal world. The game in total has seventeen chapters, and the story can be completed around a six to eight hours including all the extra bits of exploration. While it is a simple story it has some interesting twists and turns throughout the gameplay, but it is a rather linear game, so for those wanting an open world survival game, or a branching storyline will be disappointed. 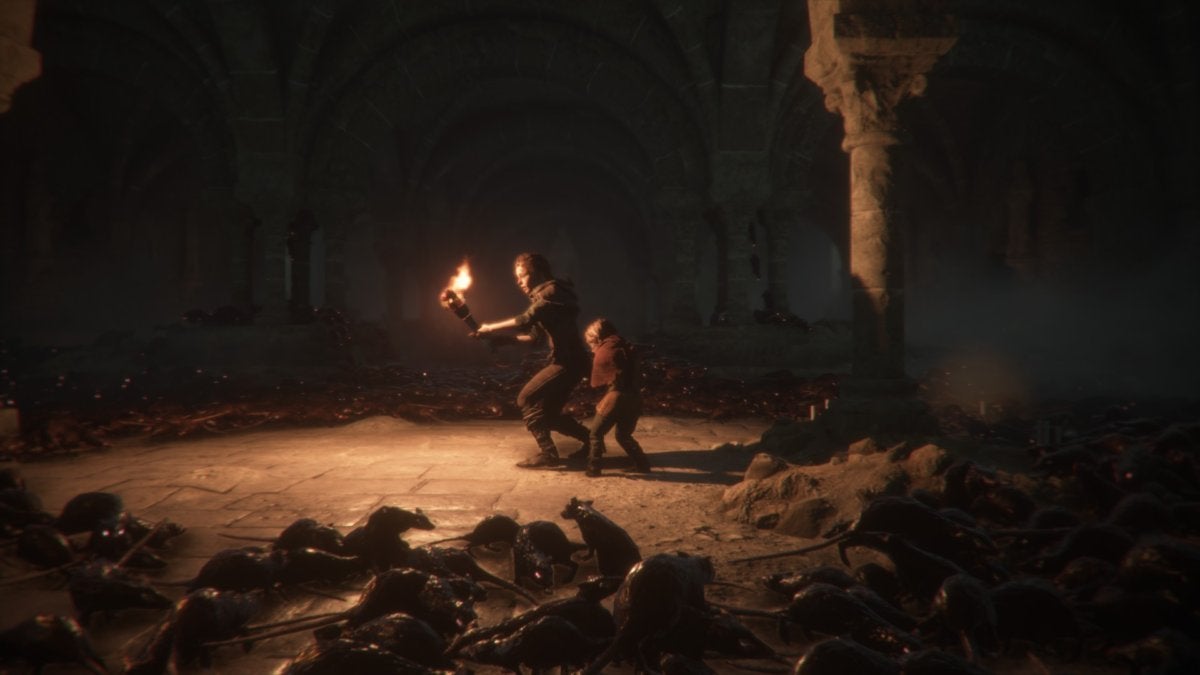 The gameplay of A Plague Tale: Innocence is stealth based, but it is not as harsh as a Splinter Cell game, or a Hitman game. In fact, I found the gameplay to be one of the easiest and forgiving I have ever encountered. The AI is gullible and does not question the fact too much that I keep luring them away to the same spot two or three times, and walk the same path every time to check the noise. The guards, and enemies are most of the times are placed too conveniently especially in later parts of the game. A large array of items are available to distract or even kill the enemies that stand in the sibling’s way. From firebombs, acid bombs, rocks, pots, and even an item that lets you lure rats to kill off enemies.

The player also has the ability to upgrade their items, bombs, and backpacks by collecting material throughout the world. Some materials, however, have to be balanced as they can be also used to craft the actual items to make the playthrough easier in some cases.  For instance, leather can be used to upgrade the backpack, but also it can be used to craft a special firebomb that gets rid of rats, as leather is very limited the player will have to make a choice throughout the game how they want to spend certain materials. Most of the human enemies can be defeated though in the late game, and the challenge of the game is slightly trivial. It does break up the monotony, and it does not become a walking simulator, plus it is fun to decide how to eliminate the enemy guards and inquisition members, and there are even (an easy) boss fights, but if you like challenge then do not expect it from this game whether it is stealth or combat. 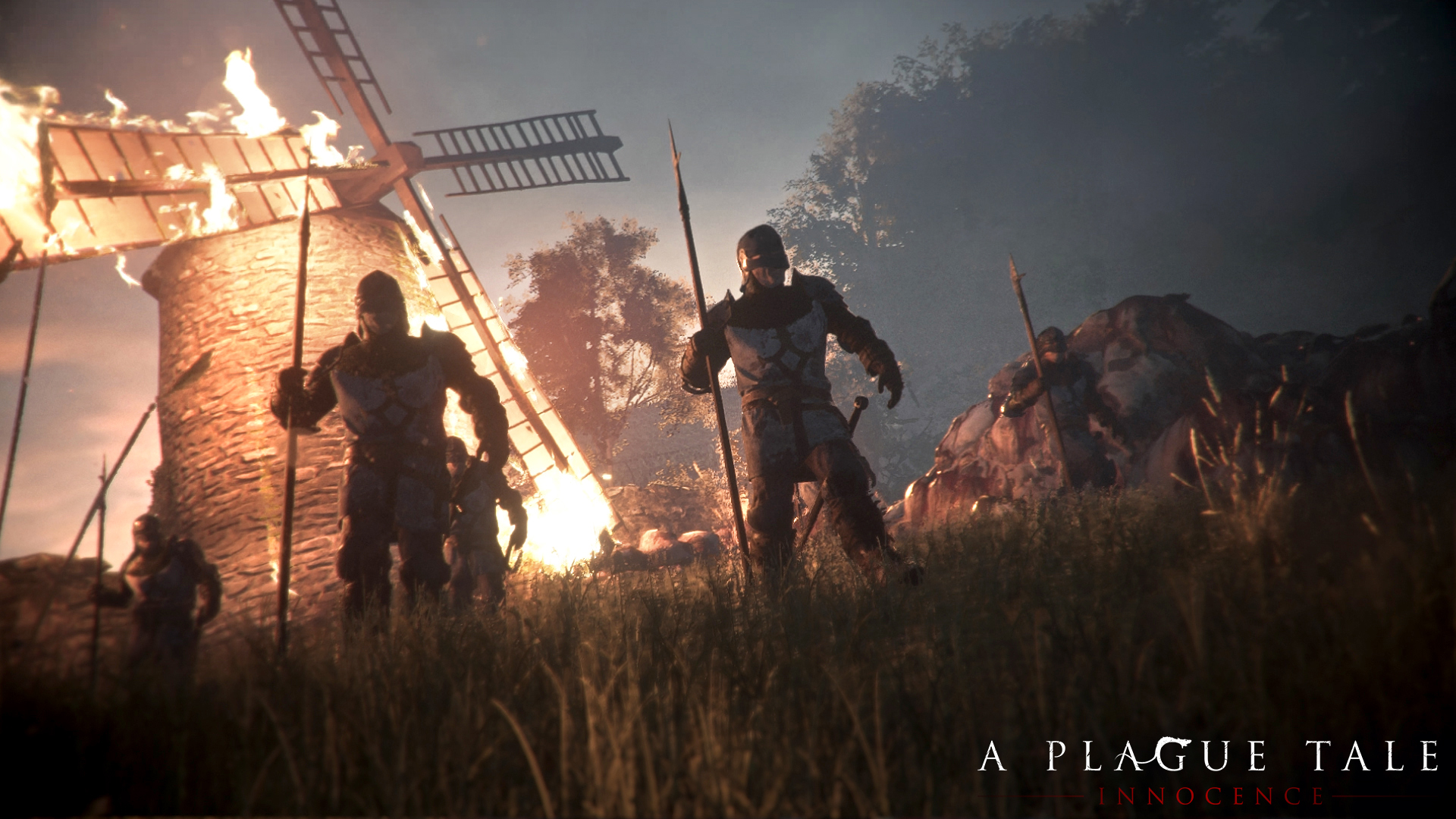 The Winelands of France, and the sounds of death

The graphics on the PC and on consoles look marvellous. As this is a linear story driven game, the developers were able to maximize their efforts on every tiny detail. It is handcrafted, with no repetition or bloat. From the sunny manor of the de Rune family, to the plague-ridden village, and the bloody battlefield filled with rats between the corpses of English and French soldiers the game looks marvellous. The smoke and fire look splendid on a 4K TV, and the atmosphere is one of the best for 2019. There are a couple of instances where on the consoles the graphics become a bit blurry in the distance, but it only seemed to happen in very specific scenes, as if a director was trying to make the player focus to one point of the scene. It is pretty rare, but it is annoying how parts of the beautiful graphics can become blurry. Regardless it is a beautiful game to play, and experience.

However it is not just the graphics that are top-tier, but the sound design is also great. Especially since the music is being handled by Olivier Deriviere who also worked on Vampyr, and those tense chase scenes, or creepy and horroristic moments are captured spectacularly by him. The soundtrack for this game is something that must be listened to. Even the voice acting for the game is great, and the five-year-old Hugo (which I was dreading to listen to) is voice acted in a way that it does not feel annoying, like with so many child actors.

A Plague Tale: Innocence is an experience, an easy to digest, but nevertheless a fun experience. It does not overstay its welcome, does not try to be a bloated adventure game or an open world survival game. The story is compelling, it looks great, and has one of the best soundtracks of 2019. Hopefully, we do not have to wait for something similar from Asobo Studios for another ten years.

REVIEW – A Plague Tale: Innocence is Asobo Studios’ first fully developed game after a decade with their last game developed being Fuel. The developers up to this point have been mainly assisting with ports, and their foray into a story driven is a new adventure especially after their racing game from 2009.   Focus Home Interactive is also a publisher that seems to focus on niche titles, and interesting concepts. From Call of Cthulhu, to The Surge, Blood Bowl, and to Vampyr they have a wide catalogue of different games published under them. A true mid-tier game publisher, and…
A Plague Tale: Innocence – Rats In the Walls
A Plague Tale: Innocence – Rats In the Walls
Dante
A super action-adventure game with fun mechanics and stealth.

A super action-adventure game with fun mechanics and stealth.