Gears 5 – This is Game Pass REVIEW – Microsoft has been in a pickle for this generation since the beginning, after massively kneecapping themselves with their marketing, the Xbox One has been lacking exclusive that can rival Sony’s output this generation.

With Microsoft gearing up to the next generation, they are doing everything to have an audience for their future games. Besides buying studios left and right, one of their other initiatives is Xbox Game Pass. Customers pay a monthly fee and get instant access to a large catalogue of games. This includes many old Xbox Exclusives, but also newly released Xbox exclusive games such as Halo, and Gears 5 is included in their offering.

While Gears 4 was a good game, but it felt a bit safe, and did not bring too much new to the table. It was a test to see whether the new team called The Coalition can build a proper Gears game without alienating the fan base with too many ideas. Now three years after 2016 – Gears of War is now back simply titled as Gears 5, with some necessary changes, and it also released on Game Pass on the same day for Ultimate users. Let us see if the wait was worth it. The long road to victory

Gears 5 picks up shortly after the events of Gears of War 4. Humanity is once again scrambling to defend itself against The Swarm. The Coalition of Governments is trying to recruit as many outsider clans as possible. Kait, JD and Marcus try to get the old Hammer of Dawn network back online, and after a large battle in Settlement 2, all hell breaks loose. In the end, Kait decides to finally get some answers for her nightmares, by exploring Sera, and finally putting an end to The Swarm.

The story is good, and while it has the usual Michael Bay bombasticness from the old game, it does try to put a new spin on the series. The developers after realizing that the franchise has been going on for six games at this point (Judgement included), realized they should probably explain a few things that only are in the Gears books, or referred to in the comics, or just simply flesh out some concepts from the previous games. For instances what happened with Anya Stroud, the state of the government, what exactly made JD and Del leave the COG, how the Locust was created, and many other interesting tidbits that were not explored in the past five games.

Speaking of which the game also tries to inject more character, more dialogue, and drama into Gears 5 rather than just be a quip fest from the previous games. Luckily it works, and they were able to make the new characters introduced in Gears of War 4 to be likeable finally as they have discussions, disagreements, and are not starry-eyed rebels who think they can do no wrong. There is also now more downtime, compared to the old games, where it went from one set piece to another. Most of Act 2 and Act 3 have lengthy reflections and conversations between characters when riding on the Skiff. It is nothing epic in terms of change, but such small touches finally expand the character interaction. The campaign itself is roughly around 8-12 hours depending on if the player wants to collect all the collectables, and complete all side-missions out in the world. It is a well-paced game, that does not overstay its welcome.

All in all, it is a good story, with some much-needed explanation to the state of the world, plus the characters have a depth to them finally, although the last act is a bit short. 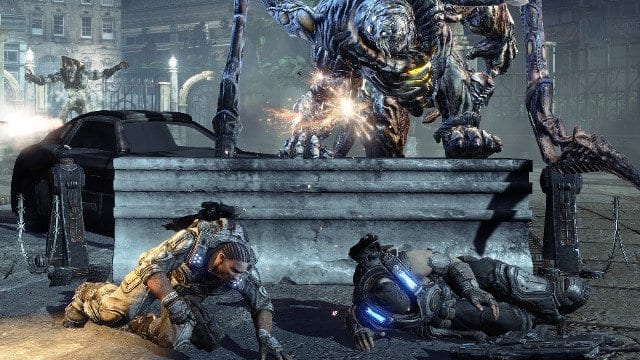 Breath of The Swarm

Speaking of depth, Gears 5 has a few interesting tricks up its sleeve. Jack (the loveable robot from the series), can now be upgraded by finding components around the levels. Also completing all sidequests will give ultimate unlocks for its skills. In Co-Op one of the players can actually play as the robot, and it also has a fun feature where the player (or the AI), can get the player weapons and ammo from far away locations.

New guns have also been introduced such as the Lancer GL which rather than having a chainsaw now has a grenade launcher, and there is also the Swarm Crawl which is basically an LMG that gets more accurate the more you fire it. Finally, we get a new melee weapon in the form of the Breaker Mace which just smashes everything to tiny bits. We also get a vehicle to drive around in two acts in Gears 5, which is called Skiff. On the Skiff, you can store weapons, so if you find a great weapon that you do not want to waste early, you can put it aside.

The maps themselves though are not too big, and while pretty, there is not much to do. The Skiff does not get attacked by random mobs, or even by wildlife. It is barren and empty, and I get that this is after multiple wars, but there were 25 years of peace. A bit more natural encounters would have elevated the semi-open world nature of the game. Hopefully, in the next game, they will take it further. The encounters are well varied, and even the environments are dynamic in certain situations such as shooting the ice to get enemies to fall into their icy grave or using instantly forming Glass Trees as cover.

In the end, while it is still the same good old Gears of War gameplay with the shooting, it provides enough variety that it feels new. 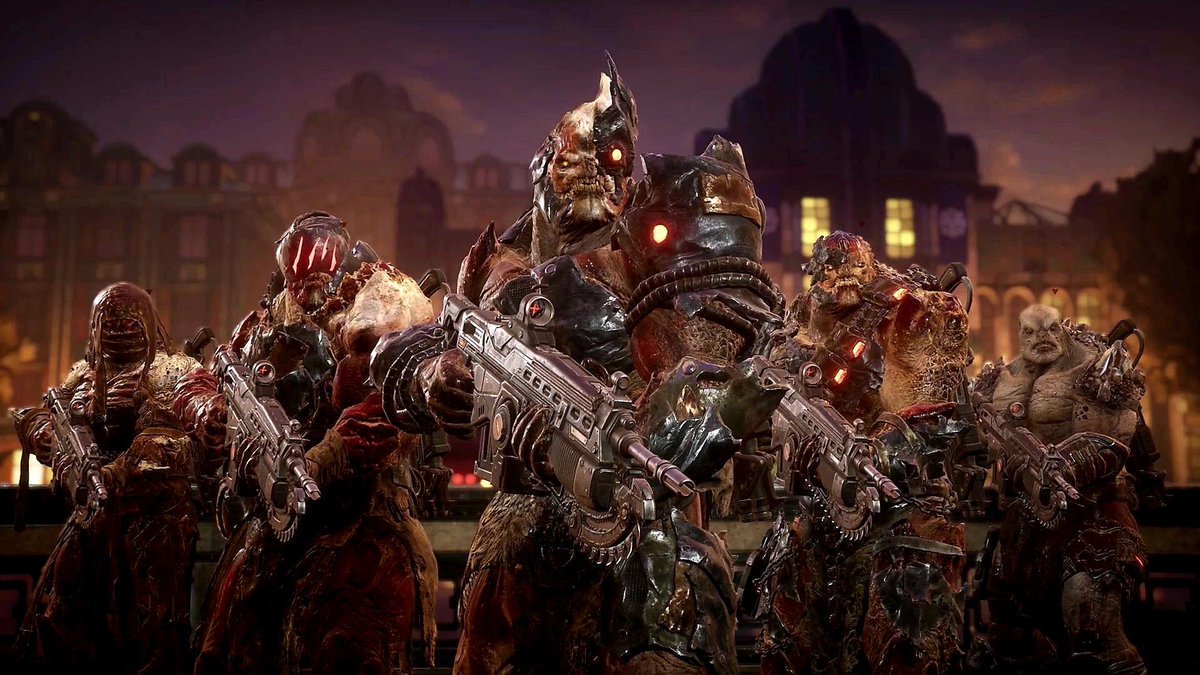 Escape from The Swarm

The game also has quite a lot of additional modes besides the usual campaign. We have Versus which provide a whole host of different modes: Tour of Duty, Bootcamp, Escalation, King of the Hill, Arms Race, Dodgeball, Execution, Guardian, Team Deathmatch, Warzone.

Then we have Horde mode which has also been updated a bit. The aim of Horde mode is to survive 50 waves with your friends on a map. Boss battles return in Horde mode, but also the characters that we choose now get special abilities, and also Ultimate Abilities that the player can charge with kills. JD, for instance, can call in artillery strikes, Kait can turn invisible, and Marcus can soak up a lot of damage when activating their abilities. Horde mode is the longest commitment for multiplayer, but with all the new ideas it is still fun to play after six games.

Gears 5 also has a new mode for those who do not have hours to play, and do not like competitive multiplayer, however, would still like to feel the tension. For them, there is Escape, in which three players are tasked with escaping from a Hive building, with limited ammo, and support. The players plant a bomb, and after that have to get to the exit as quickly as possible, while a bomb behind them spreads a virus. The mode can take roughly 10-15 minutes if not faster with experienced players.

Gears 5’s multiplayer is familiar, but also provides once again enough new takes on old formulas that it still does not get old to play online.

The audio and visuals in Gears 5 are superb, even on Xbox One X, it looks great. The lighting is especially impressive at indoor locations, it really manages to give back that Gears 1 horror vibe that the first game was showing off. The outdoor locations look good, but because most of it is static (besides a few scripted instances) it loses some of the magic. There are also some scenes that just have washed out textures off in the distance. Character models though are all highly detailed, and a marvel to look at, especially thanks to the 60FPS the game is pushing.

The music and the sound effects are what we usually get from a Gears game: Bombastic, and full of bass. Explosions will rock the room, and gunfire has a lot of depth to it, and the music will always try to match a certain scene. The cinematic cutscenes also have great direction, and it really does feel like watching a good Michael Bay movie.

On the PC there is an additional Ultra Texture pack that Microsoft made available, and hopefully, console players will experience that next year when the new console comes out. The graphics and sound design are topnotch in Gears 5 and there are not many issues with it – besides the odd texture issue.

Next time on Gears

In the end Gears 5 is a perfect sequel, and really rights the wrong from Gears 4 across the board. The current issues about the game are mostly technically which are getting patched in by the developers. There are same save /collectable/ progress issues encountered by players, and the occasional server issues, but as this is Microsoft’s flagship title as an exclusive, and heavily marketed on Game Pass that is expected.

Microsoft and The Coalition proved that there is still hope for their exclusives (even if it does come out on PC) and that there is still life left in this IP. Hopefully, with the new console coming out next year we can expect Gears 6 to be out soon with even more radical changes.

REVIEW – Microsoft has been in a pickle for this generation since the beginning, after massively kneecapping themselves with their marketing, the Xbox One has been lacking exclusive that can rival Sony’s output this generation.   With Microsoft gearing up to the next generation, they are doing everything to have an audience for their future games. Besides buying studios left and right, one of their other initiatives is Xbox Game Pass. Customers pay a monthly fee and get instant access to a large catalogue of games. This includes many old Xbox Exclusives, but also newly released Xbox exclusive games such…
Gears 5 – This is Game Pass
Gears 5 – This is Game Pass
Dante
Microsoft and The Coalition are back with a Game of the Year material. Return to form in the TPS genre.

Microsoft and The Coalition are back with a Game of the Year material. Return to form in the TPS genre.