REVIEW – Once again we return to the world of Borderlands, and this time our destination will not only be the apocalyptic world of Pandora. This time the players will be able to experience the sights, sounds and loots of many worlds in the galaxy. New modes, new worlds, and even brand new characters to play as in the world of bandits, and corporate warfare.

The game has much to offer, and is one of the most anticipated sequels of 2019, with many fans hoping for favourite characters to return. The question is though if this series that always tries to improve, and be chaotic as much as possible, has improved at all? Or is this just more of the same? Find out here!

The story of Borderlands 3 picks up after the newly released DLC from Borderlands 2 called Commander Lilith & the Fight for Sanctuary. Four new vault hunters join the call of Lilith to be part of the Crimson Raiders, and things are not getting easier for Raiders. As two Sirens called Troy and Tyreen Calypso unite the Bandits, through propaganda, mayhem, and sadism which appeals to these mindless hordes. All just to find The Great Vault – one of the biggest vaults in the six galaxies. As one of four new vault hunters, you as the player slowly take back the galaxy, meet new faces (and some old), get loads of loot, kill the Calypsos and also help Claptrap build a friend!

Borderlands 3 tries to up the stakes, and rather than deal with the fate of a planet it now tasks the players with the fate of the galaxy. It provides two villains who appear to be sadistic as Handsome Jack from Borderlands 2, but never quite live up to his quality in terms of writing. In fact, the two main villains get sidelined for a third of the game, as a secondary villain just takes the stage to carry the plot. While it is a looter shooter game, the plot seems to be a step down in the quality compared to the second game, and even the mission designs suffered a tiny bit, plus some missions are a repeat from Borderlands 2 in some cases.

Also while the game has cutscenes where major plot points are shown to the player, the player character itself does not appear in them due to contrived reasons, or just simply is ignored from the cutscenes. Which is baffling especially considering that the characters we play as now actually respond to in-game dialogue from NPCs. The jokes are fine, it is the same Borderlands humour we love from the old games, with the usual, fart and shit jokes with the occasional memes, plus cultural references.

In the end, Borderlands 3’s story is a bit average, but the humour still has its good old heart. The plot is a bit long and feels stretched out at times to accommodate the planets. 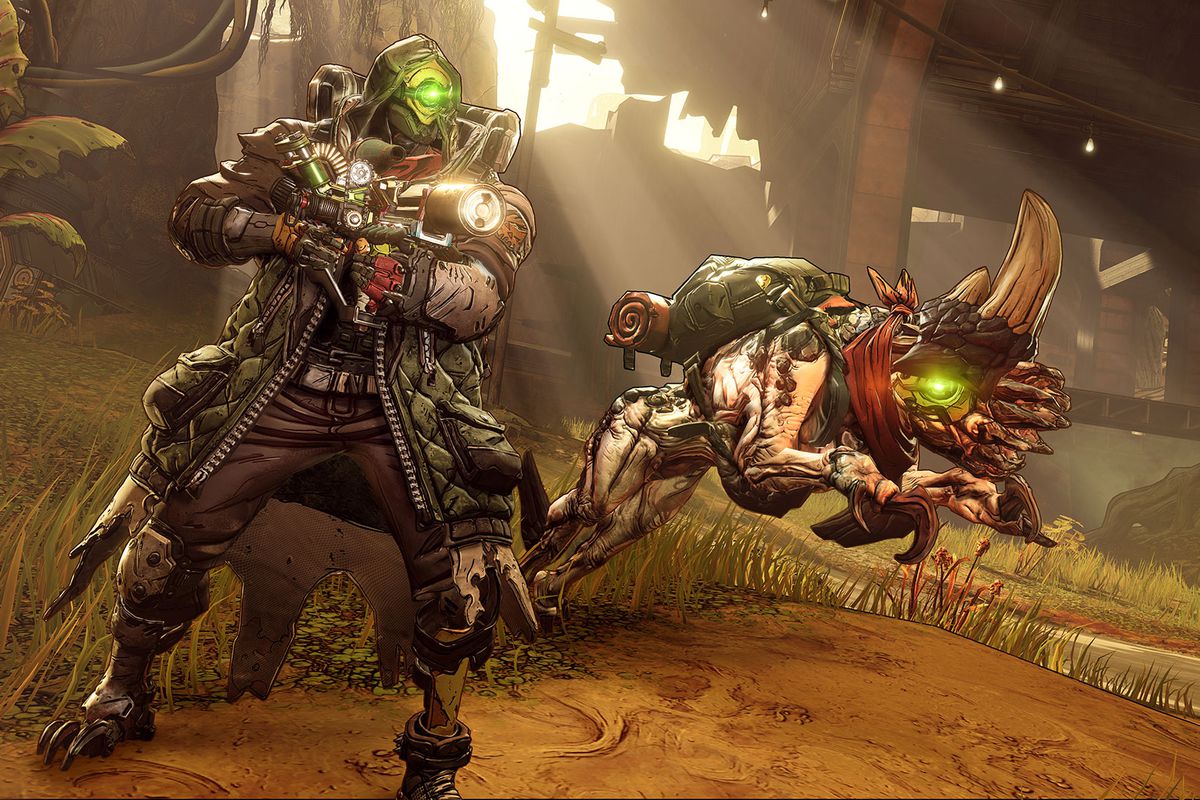 A brawler, a communist, a spy, and a maniacal robot went into a bar….

So while the story is nothing special, the new four characters we get to play as are probably one of the most unique sets of characters in 2019 in terms of gameplay. We have Amara a Siren who summons giant fists and is mostly a brawler character who can deal loads of damage in close quarters. Moze a mercenary from the Vladolf corporation who is equipped with a walking mech, and with the right skills you can pretty much get infinite ammo. Zane Flynt, a hitman with the ability to use two action skills, his main skills are a shield, a drone and a digital copy of himself that can deal a lot of damage. Plus we have F4LK (voiced by Youtuber) a robot that can take over enemies, plus summon beasts to do his bidding.

These characters do not fit into the typical archetypes, and all of them have different methods to master them. Another massive change compared to Borderlands 2, is that there are now three skills per character, and every skill tree for every character gives massively different perks and this also results in a different action skill being used. For instance, if you level up Moze on the Bottomless Mags skill tree, you will 99% times not run out of ammo. The final skill in that skill tree is ammo regeneration, plus there is also a skill tree that regenerates ammo based on critical shots. There’s also the Iron Bear (the walking Mech) that can be further customized based on what skills you have unlocked, it can either launch Nukes, or it can have giant bear fists punching enemies.

Without going into too much detail for the skills, all four characters are truly unique and offer interesting gameplay mechanics. I enjoyed playing all four characters and did not feel that it would be too boring to play as anyone of them. As mentioned previously they are not just the simple, plop down a turret and wait for kills, or just be a regular sniper. A lot of extra care went into these characters.

Now with that said though while characters are one thing, the quality of loot is another part of a looter shooter. So after completing the lengthy campaign my experience was with this game, that legendary, and epic drops are barely given out, and even most boss fights just gave out rare items. In fact, my frustration grew as I seemed to get more out of the main game through the Casino, than boss fights. Most of the weapons have an alternate firing mode, such as an electric taser, or a tracker ball that marks enemies which creates homing bullets, some guns can switch between two elemental damage modes, or either be a shotgun or an assault rifle.

Then the main campaign ended, and the endgame opened which was Mayhem Mode, which is like Destiny’s Nightfall mode. Basically, the map gets tougher enemies, and even modifiers that affect the gameplay such as better accuracy for enemies, or resistance to certain attacks – plus it gives out a bigger chance for higher quality loot. It is possible to get epic and legendary gear during the normal campaign, and the developers might adjust the loot frequency, but for me, the experience was a tad bit disappointing. Some guns even feel rehashes of old Borderlands 1 and 2 guns in terms of designs and can be at times disappointing. So while the characters are fun to play, the loot part is a bit weird, and your enjoyment of getting those epic items may vary. 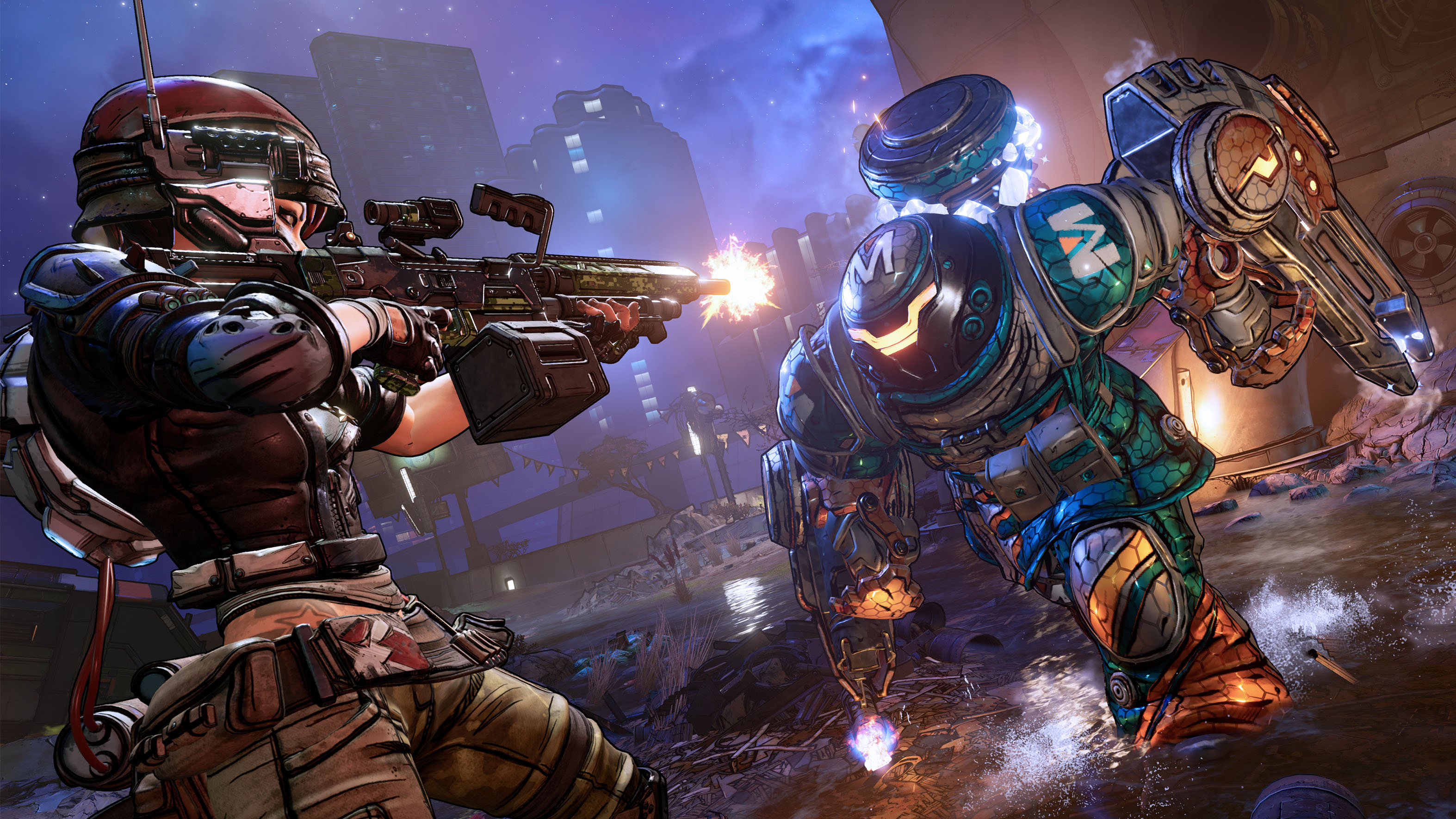 The game looks great, especially in HDR even on the consoles. On Xbox One X it has two modes, performance which tries to run on a consistent 60FPS, and performance mode where it runs in 30FPS, but the image looks much sharper. The planets are also varied and are not just the usual desert planet variations with rocks, and caves. We got our swamp planet, a city planet, and a few other interesting sights. The maps feel much more vertical and has a lot of hidden depth to them. The textures are great both for weapons and the maps.

The music is also great and provides a lot of variety for encounters, and for ambient design. Enemies also now react more than a sandbag to shots compared to Borderlands 2, plus there are more varied responses to seeing the vault hunter. Explosions, machine gun fire, and other sound effects are superb.

While the game looks great, there are a lot of weird performance issues with it. Split-screen on consoles is a total mess, and the latest update on Xbox one x will sometimes overheat the console. There is also the problem of just general sluggishness when a lot of explosions happen or a lot of enemies on screen. Performance mode is a bit off also, as the game runs better on Resolution mode, at least on the Xbox One X. Menus can also take a long time to load, and there can be certain situations where quests will bug out. In fact the most reliable method for me was to just play offline in solo, otherwise, the console at times switched off when playing online.

Borderlands 3 looks and sounds good, but there are a lot of baffling technical issues, and glitches on a game that does not seem much of a change in its art style. It has a level of detail, but it should not be running this bad on consoles.

Here’s to another five years

Borderlands 3 is sadly not perfect, and even inferior in some cases to its predecessor. However it is one of the best shooter experiences for a while, and the characters are fun to play. The loot side of it is a bit lukewarm, but the endgame opens it up. The maps are varied, and the enemies are fun to fight against, also the boss battles have multiple different phases, and can make any careless player sweat their pants off if they are not careful. However it is a bit too safe, and lacking in just innovation, or at least to not feel the same as Borderlands 2.

REVIEW – Once again we return to the world of Borderlands, and this time our destination will not only be the apocalyptic world of Pandora. This time the players will be able to experience the sights, sounds and loots of many worlds in the galaxy. New modes, new worlds, and even brand new characters to play as in the world of bandits, and corporate warfare.   The game has much to offer, and is one of the most anticipated sequels of 2019, with many fans hoping for favourite characters to return. The question is though if this series that always…
Borderlands 3 – Third Times a Headshot?
Borderlands 3 – Third Times a Headshot?
Dante
All in all an okay sequel, with a lot of technical issues, and feels a bit too safe. The DLCs might give it a bit more punch as in the previous games’ cases.

All in all an okay sequel, with a lot of technical issues, and feels a bit too safe. The DLCs might give it a bit more punch as in the previous games’ cases. Red Dead Redemption Remake To Be Made With Unreal Engine 5?! [VIDEO]