Mortal Shell – An empty vessel, or maybe full of life? REVIEW – Mortal Shell has been in development for years by a small team of mere fifteen developers who decided to tackle the Souls genre and try to put their own spin on it. The initial reveal trailer showed a rather grim, and depressing landscape, with deadly enemies, and a voice-over speaking about heresy, devoutness, all the while the player character slaughtered enemies it looked unique in terms of gameplay. After a couple of months, a gameplay trailer was shown, and a bit later an open beta was released, and we are finally here after the release of the game.

The game was initially called Dungeonhaven, and was supposed to have randomly generated levels, enemy placements, and had a much brighter colour palette based on a trailer from two years ago. However, a shift was made, and the game got rebranded to what is now called Mortal Shell, which also got enemy redesigns, location changes, and mood changes. Watching that trailer from two years ago and comparing it is just bizarre, as the art style change to this sadder and more decrepit look has done the game wonders. The story takes place in Falgrim, a ruined world where disease and monsters have taken over, and where gods have fallen. You as a nameless shell awakens in the world, tasked with retrieving three sacred glands and to free yourself from this wretched world. The story is told through the usual lore items, skills, and even etchings which detail some of the events that have occurred in Falgrim. There is voice acting for the NPCs and even some monologues when unlocking the skills for each character. As even the skills have some supplementary story to provide for the Shells. It is not as vague as Dark Souls, but for those lore hunters, the game still provides some mystery, and guesswork as to what happened exactly in Falgrim.

There is a total of four areas in the game, and a total of four shells to unlock throughout the playthrough. The first main area is Falgrim and its outskirts which acts as a hub world connecting to the other three main worlds. At the end of each world, there is an epic boss battle, and the players will have a long time getting to those bosses. While four areas do not seem much the game can still take fifteen hours or more depending on the player’s skill. There is a total of four shells unlockable, and upgradeable in the game. Harros a jack of all trade’s warrior with adequate health and stamina, Solomon, a scholar who has the most amount of resolve. We also have Eredrim, the Tank of the game who can take a lot of damage, and finally Tiel the shell that has the most stamina.

All four shells have their own skill tree and their own lore associated with them which is rather fun. The game allows the player to mix and match the shells with the four available weapons. Furthermore, parrying is not just for blocking enemy attacks, but can be mixed up with special skills. The first one you get is getting your health back upon a successful parry, while the rest are, well let’s leave that for the player to find out as some provide some pretty crazy benefits. We also have a special skill that replaces the usual shields in videogames and makes the game more tactical. Hardening turns the character into stone and allows it to withstand even unparryable attacks. The trade-off is that there is a cooldown for this and is not easily spammable during encounters. There is also a resolve mechanic that charges the weapons special abilities.

While the game initially thought to be a copy of Dark Souls, it feels much more fast-paced, and parry/ability focused. There is no estus flask, and most of the skills that allow the player to gain an advantage over the enemy are linked to parrying the enemy. It is a huge difference compared to Dark Souls’s slow, and shield-based combat, and I preferred the gameplay this way. 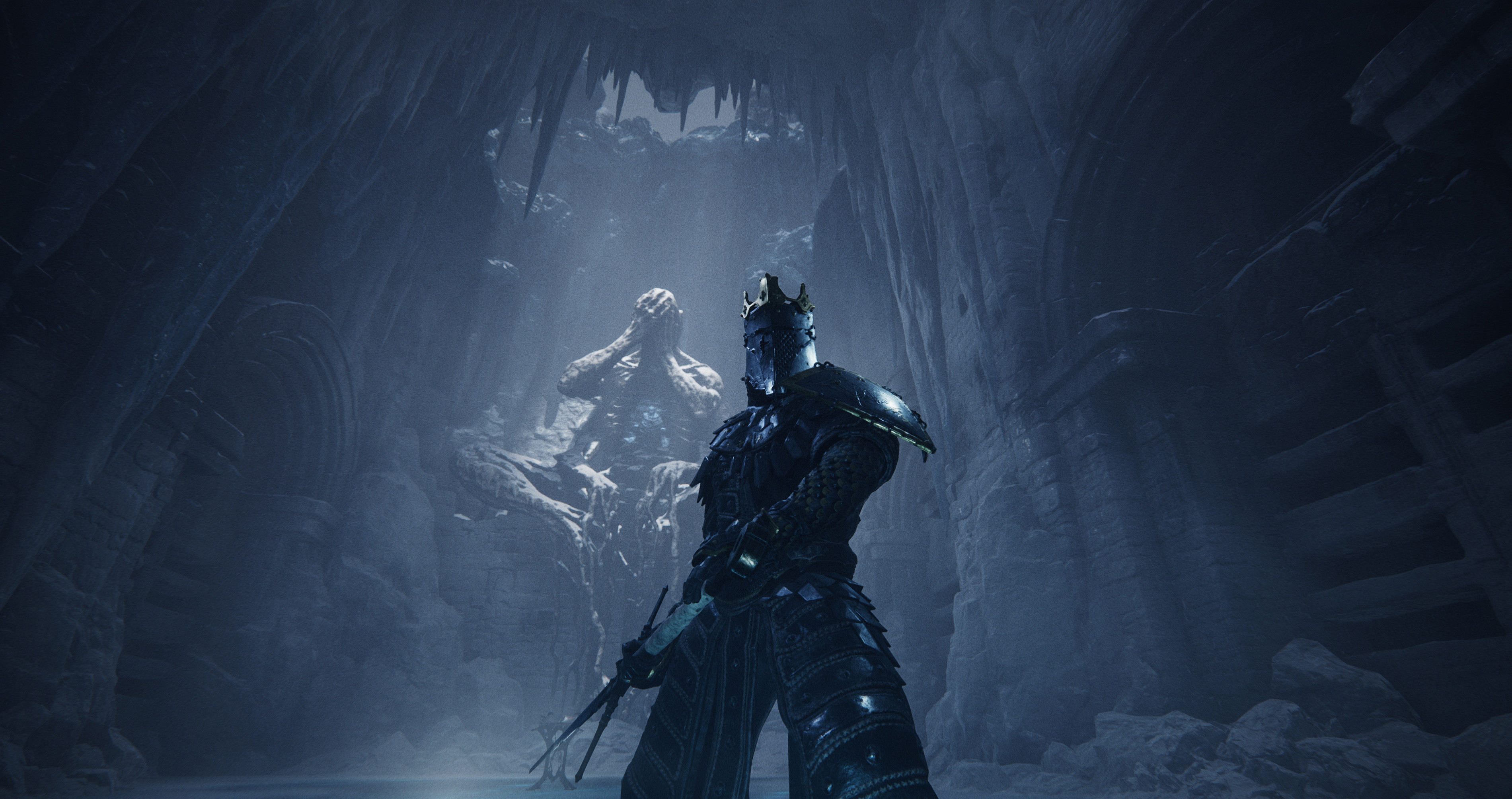 A heavy swing, and the sound of death

The game runs on Unreal Engine 4, and while it was made by a fifteen-member development company, it has a great presentation. The atmosphere is dark, brooding, and all of the environments are unique, different and have layers to them. Except for the hub area which has a bit of an issue where you can get lost when trying to find the proper route to the home base, or one of the other worlds. The animation is superb, and every hit and swing feel heavy, impactful and the accompanying sounds all give that great punch. Most of it is fluid, and there were not many instances where the animation felt choppy. The lighting compared to the original Dungeonhaven has done wonders to the game, and the mood is just dreadfully depressing which I enjoyed to its fullest.

Enemy variety and animation are also surprisingly vast, every dungeon has their enemy types, and designs, there is no repetition between the worlds, and while the worlds are not big, the enemies will keep the player on their toes. Some are creepy in their design, some are the usual monster imp, and a few have unique properties that are detailed greatly in the UE4.

One of my main gripes with the game sadly is while the animation is great, and the graphics are also superb, the parry mechanic is relentless. Every enemy has multiple types of attacks, and while most of them are parryable, it is going to take a long time for the player to learn these. If the player does not try to engage with the parry mechanic they are going to be missing out on a lot of opportunities within the game and will be more difficult to progress through the stages.

The other main issue I have is that well there’s not much music in the game, and what little there is, is unmemorable. While the bosses have soundtracks it’s fine and does their job, but a bit heavier music would have done wonders for the game. Also, the AI, it’s not that smart, and sometimes does bizarre things, for instance in the hub area there were locations where the enemy would just hover in the air after knocking them away, and rather than falling, they would just stand there. Also, sometimes the AI / and animation would decide to do something quickly with leaving little reaction time for the player.

One final issue is that the game does not do a good job at signposting which world should be started and which world is the one that should be avoided. I understand that the game allows the player to tackle any of the worlds, but starting the most difficult one can be a mistake for some, as at times it is really difficult to backtrack to the hub area if you end up going too deep into a difficult dungeon.

It is still a great game, but the enemy AI and pathfinding are horrible at times and ruins some of the immersion for the game. The graphics, sound effects (except the music), and level design is great though, and some of the designs reminded me of old H.R. Giger paintings.

In the end, Mortal Shell is a superb feat from a Dev team of fifteen, and while the game could have been even better with more locations, and more weapons (and maybe a more robust new game plus mode) it is a great new IP and game. The price of entry is thirty dollars and for a game that has so many new design ideas, and length of time to complete the game it is worth it, just bear in my mind of the difficulty curve.

A new IP that doesn’t just copy the Souls formula but puts its spin on it, making a faster more agile game compared to what From Software, and some other clones offered.

REVIEW – Mortal Shell has been in development for years by a small team of mere fifteen developers who decided to tackle the Souls genre and try to put their own spin on it. The initial reveal trailer showed a rather grim, and depressing landscape, with deadly enemies, and a voice-over speaking about heresy, devoutness, all the while the player character slaughtered enemies it looked unique in terms of gameplay. After a couple of months, a gameplay trailer was shown, and a bit later an open beta was released, and we are finally here after the release of the game.…
Mortal Shell – An empty vessel, or maybe full of life?
Mortal Shell – An empty vessel, or maybe full of life?
Dante
A new IP that doesn’t just copy the Souls formula but puts its spin on it, making a faster more agile game compared to what From Software, and some other clones offered.

A new IP that doesn’t just copy the Souls formula but puts its spin on it, making a faster more agile game compared to what From Software, and some other clones offered.

User Rating: Be the first one !
Spread the love
Tagged Microsoft WindowsMortal Shell REVIEWPlaystackPlayStation 4Xbox One