Sony Goes Through A Strategy Change; Uncharted 4 Is Heading To PC Sony will also focus on the live service (games-as-a-service, we will only say GaaS for short onwards!), as it has been named as one of the growth vectors for the company.

But first, take a look at the image below. It is from a Game & Network Services Segment slide from a presentation that Sony Group held on its investor relations day.

One of the growth vectors will be the off-console presence. Aside from the Chinese, Russian, and Indian markets as new target geographies and their goal of aiming for new fans for their IP, the „more PC releases planned” part has Uncharted 4: A Thief’s End. So Sony has officially confirmed the arrival of Drake to PC, and it’s not even some random leak, it’s coming from Sony itself.

There’s also the mobile thing that will be mentioned later, but on the other side, we see GaaS. MLB The Show 21 made the annual baseball adaptation a multiplatform IP, and it shows that post-launch, it had the highest paying user spend on the US PlayStation Store in sports games. Then, their first-party studios are planning to develop more service-led experiences both on PlayStation platforms and off those (PC, mobile…).

Sony announced that they will invest about 18.4 billion dollars in the next three years to grow the company’s ecosystem from 160 million customers to one billion. They plan to bring their Demon Slayer anime to a feature film and a video game, they have ten PlayStation IPs that will either get a TV or a cinematic adaptation (and one of them is the February arrival Uncharted, which recently got a brand new screenshot)-

„In addition to what we do in the services space around anime and games, what we do in the mobile and social spaces will be crucial to expanding the world of people to whom we deliver Kando. I believe this is indispensable to the development of the PlayStation Community. First, I will discuss mobile. We are already deploying our anime-related IP in the form of mobile games. Fate/Grand Order (FGO) is a prime example of this. FGO has become a hit in China through our collaboration with Bilibili. We will continue to actively release mobile games based on anime-related IP around the world. And we will further focus on deploying PlayStationʼs proprietary IP to mobile as well.

Next is social, which is making genres more seamless as they convergences with entertainment. Sony is already active in the social space as is shown on this slide. Greater social engagement has fundamentally changed how content is made and how it is disseminated, and it has affected more than just content ‒ it is facilitating direct connections between creators and users. One of the next big challenges for Sony is to make the PlayStation more social. Our efforts in the services, mobile and social arenas are crucial to expanding the world that Sony will fill with emotion, and that is especially the case for PlayStation,” Sony’s president, Kenichiro Yoshida said.

„Another important area is the convergence of Social and Entertainment, which is making communication an increasingly critical component of entertainment. Our investment in Discord is another example of the convergence of social and entertainment; fan reception to this news has been positive, indicating a desire to expand the social aspects of gaming. The content developed by PlayStation Studios these past 25 years has created a wealth of IP and provided PlayStation with immersive experiences that evoke emotions and bring players on a journey. We have been thinking about how players enjoy our content and have had some early success with experimenting with mobile games and apps to provide more choice to gamers.

Mobile is just one of the areas we are exploring to reach millions of gamers beyond our platforms. PlayStation has a huge catalogue of diverse first-party IP that can transition to smartphone gaming and complement our AAA games or live service games. We are exploring the mobile market with some wonderful PlayStation franchises so please stay tuned. Through investments in IP, Group collaboration within Sony, investment in Social and Mobile, we are excited for the opportunity to continue to expand our community and welcome millions of new gamers to the PlayStation family,” Jim Ryan, the president of Sony Interactive Entertainment added. We also learned that the PlayStation VR 2 will use the „latest sensing technology,” and the AI research division, which was established in late 2019, has results that Sony’s first-party studios will use to make games even richer and more enjoyable. They also plan to strengthen the PlayStation Now.

Still, the change is there: more emphasis on PC, mobile, and GaaS titles. So they no longer concentrate on single-player experiences. It might be bringing big changes to Sony… 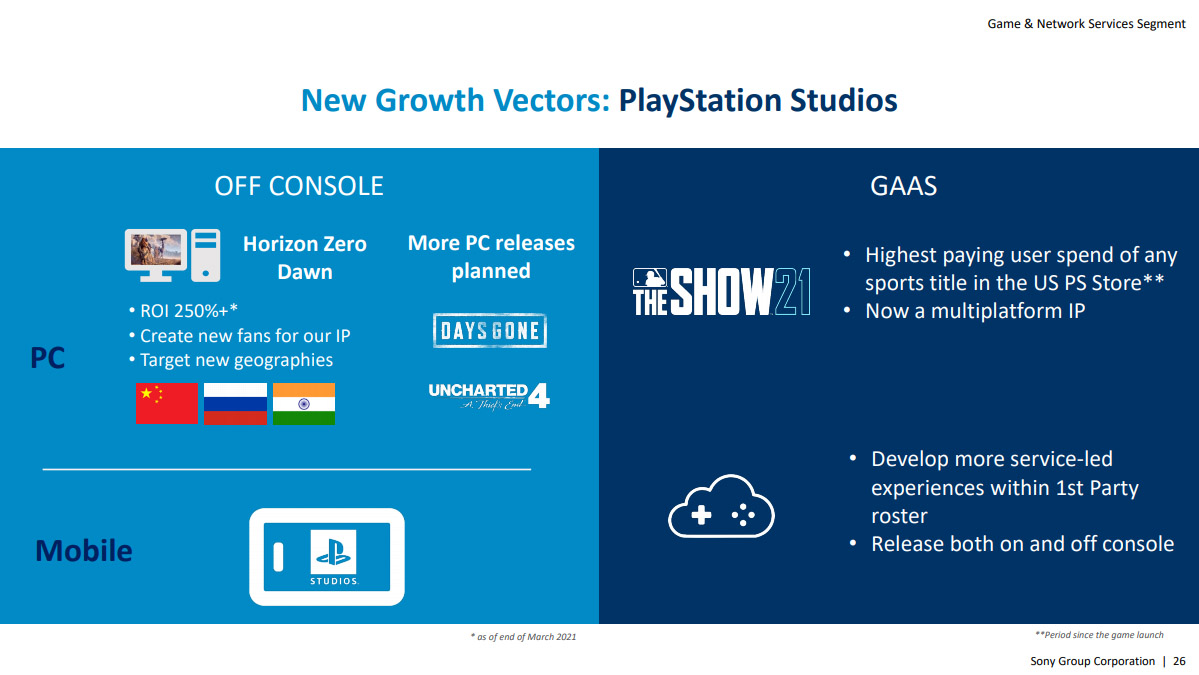