Alone in the Dark: The New Nightmare – “On This Island the Shadows Come to Life…” [RETRO-2001] RETRO – When you hear this sentence from the toothless lips of a wrinkled, corpse-like old woman lying on her rotting bed in a dark room of an ancient castle, your virtual hero’s palms are guaranteed to start sweating from the grip of her gun, and you, huddled in front of your monitor, will grip your gamepad tighter, blink backwards more frequently, wonder if you’ve locked the door properly and think three times before visiting the bathroom at the far end of the flat. In the PC gaming market, this effect has been most strongly felt by games in the ‘survival horror’ genre, the most illustrious of which so far has been the Alone in the Dark series…

Alfred Hitchcock, the great master of suspense, once said that the introductory sequence of bloody murders played a far greater role in creating fear in his films than the actual killing. One of the climactic scenes in Psycho, for example, is when the detective investigating the murderer Norman Bates, dressed as his own mother, makes his way up the stairs at a nerve-wrackingly slow and long pace, and we can already anticipate that something terrible is about to happen.

I think it was this similarly well-dosed tension-building that made the Alone in the Dark series one of the most memorable action-adventure games of its time, but it also succeeded in creating the survival horror genre. No wonder fans of the genre have been waiting on pins and needles for the fourth instalment, which has finally arrived…

Edward Carnby is back in the lead role, but our hero is not only unrecognisable to his old fans, but also to his own mother, who has lost his Sherlock Holmes look and is now a young private eye in present-day New York, instead of the 1930s. The Infogrames website didn’t give any explanation as to how this very different style of a guy ended up in this modern milieu of 2001, but the backstory was interesting enough that I didn’t really feel left out.

The story is that Carnby is investigating the death of an old friend and colleague, Charles Fiske, whose body was found not far from the mysterious “Shadow Island”. The trail leads to Obed Morton, a scientist with a keen interest in the occult, who is rumoured to be able to summon terrible otherworldly powers through a few stolen artefacts. Carnby is asked to continue the investigation and accepts the assignment, vowing revenge for the death of his detective friend.

Carnby and Aline in the Dark

The detective is not alone this time: he is joined by the pretty young archaeologist Aline Cedrac. Aline is supposed to have joined our hero because of the stolen artefacts, but it soon becomes clear that she has personal reasons… In the game’s intro, our heroes’ plane crashes due to a raging storm (because, of course, that’s the kind of weather you fly in…), and the two protagonists parachute out at the last moment, separating from each other. The player has to decide at this point, as in the Resident Evil games, whether to go with the sexy Aline or the traditional Master Carnby.

The story can’t be complained about: cleverly interspersed with various diary fragments and scrolls, we slowly learn the terrible secrets of the Morfon family, passed down from father to son, which revolve around genetic experiments on humans and alien beings.

What can you see in the dark?

The game’s graphical engine is composed of the usual hand-drawn, eye-catchingly detailed 2D backgrounds and well-drawn 3D characters, similar to the look of the Nocturne and BlairWitch Project series, and it seems to be becoming a trademark of the Alone clones that the characters are masters of ventriloquism, so their mouths don’t move during dialogue. Even now, we can watch our heroes explain with a stiff face and a still mouth during each walkie-talkie conversation – when will they ever get this right in these games…?

Apart from this minor mishap, Carnby is a relatively sympathetic and interesting character (he could be Agent Mulder except for his long hair), and Aline, in keeping with the Lara Croft trend, is blessed by nature with a big “lung” and a “Jennifer Lopezesque” shapely backside. I could somehow relate to these two characters more than to the old Alone or the rather impersonal and unpolished protagonists of Nocturne, for example.

Besides the appearance of the key characters, the presentation of the monsters is a primary concern in survival horror action games: if they are not scary enough, our heroes will have to “survive” the boredom of the nice player and the digital death caused by Alt F4. New Nightmare only partially meets expectations in this respect.

The main monsters and some of the less important critters can really scare the hell out of you: on occasion, I was so startled by an unexpected attack that the gamepad almost flew out of my hand. 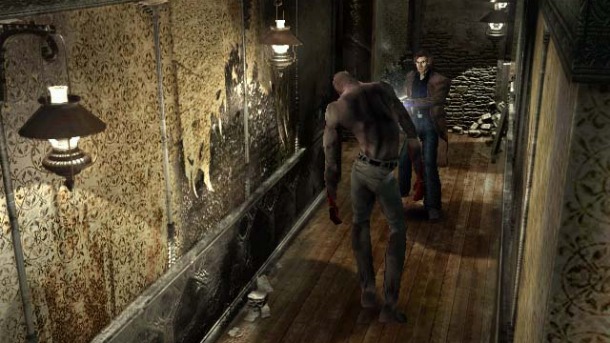 However, we find monsters that are rather ridiculous, or that hark back to other games. For example, the slowly limping, stomach-slitting zombie-like humanoids bear a striking resemblance to the daemites of the Blair Witch Project, while in another spot, we’re greeted by the brain-sucking beasts that jumped on our heads in Half Life…

Our torches will play an important role in the game, allowing us to spot objects and monsters hiding in the dark. The creators are very proud of the fact that the brand new “meshing” technology allows the various terrain elements to cast shadows when the light beam hits them, making static backgrounds more realistic and believable.

The transition cinemas are similarly well-designed. Right at the start of the game, there is a very well-paced opening trailer, cut from the main scenes, but there is also an excellent cinematic intro, and the makers have not skimped on the various cinematic inserts that are shown during the main events. The occasional music is scary enough, but technically it is on a par with the Amiga. It did give me a pleasant, nostalgic feeling, but I’m afraid that not everyone will feel the same way…

The Darkworks team didn’t shine in terms of sound either: in many places you can’t hear the rain tapping (although we can see it drizzling), or in some places, some sounds are simply muted. What is at least noticeable is also rather clumsy: sometimes I found myself wondering what object was being struck to create this lamentable effect…

The Lovecraftian atmosphere is not lost but transformed…

But this is where Alone in the Dark still stands high above its clones (especially the Resident Evil series). Thanks to the great storyline, I found myself returning to the game again and again, despite the sometimes too difficult puzzles, the quest for keys and locked doors, or the occasional clumsy monster antics. And for fans of the genre and the series, I really recommend the fourth part: fortunately, the Lovecraftian gothic horror atmosphere has not been lost in the real and virtual 2001…

Alone in the Dark: The New Nightmare

Alone in the Dark still stands high above its clones (especially the Resident Evil series). Thanks to the great storyline, I found myself returning to the game again and again, despite the sometimes too difficult puzzles, the quest for keys and locked doors, or the occasional clumsy monster antics. And for fans of the genre and the series, I really recommend the fourth part: fortunately, the Lovecraftian gothic horror atmosphere has not been lost in the real and virtual 2001...

User Rating: Be the first one !
Spread the love
Tweet
Tagged Alone in the Dark: The New Nightmarehorrorretro