The Conjuring 3: The Devil Made Me Do It – The devil isn’t even in the details MOVIE REVIEW – The film evokes the style James Wan established with the first instalment of Amongst the Demons, without creating an identity of its own.

After entrusting his protégés with the spin-offs of the franchise he created to dabble in the indigestible blockbuster, James Wan abandons the direction of Conjuring in the hands of Michael Chaves and settles for the positions of producer and co-writer. Chaves having directed one of the worst instalments of the Conjuring-verse, The Curse of the White Lady, the project did not inspire confidence, although the case it is adapted from promised a potential renewal of the formula. Conjuring 3: Under the Devil’s Influence, the big terror movie of the summer of 2021? Speak of the devil…

The franchise had to tackle one day this story involving the Warrens, a source of fascination for many Americans. In 1981, Arne Cheyenne Johnson killed the owner of his home. During his trial, he pleads “demonic possession”, a first in the United States, which does not fail to attract the attention of the media. By choosing to adopt this part of the career of the self-proclaimed demonologist couple, the authors of Conjuring 3 seem to want to take the saga out of its pure formalism, to get it out of the traditional haunted house story that proved its limits in the second part of the Enfield case.

Beyond the opportunity to broaden the universe developed so far, the Arne Johnson case promises to finally put a critical eye on the reconstructed events. Indeed, it perfectly completes the Warren’s list of achievements since it also crystallizes the modalities of American entertainment, forced to reconcile religious faith and permanent spectacle. Since Wan has always put technique above content with obvious expertise, this was the perfect time to take up these issues (while, paradoxically, he remains at the writing stage). 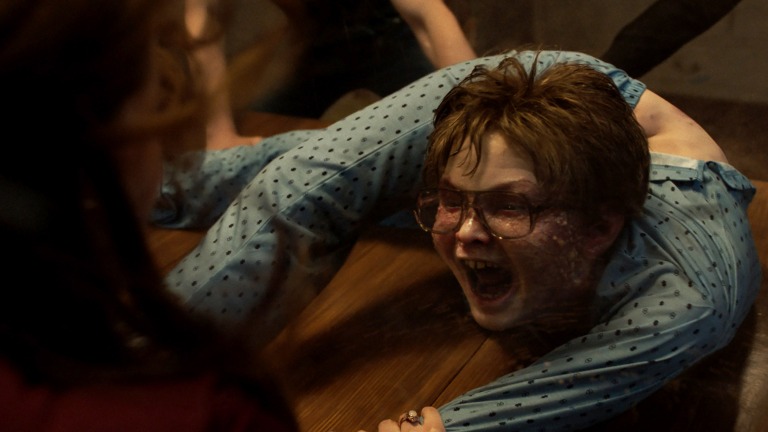 The Devil is (il)legal?

And the film does not shy away from this. Its entire first act is dedicated to exposing the ambitious problem that runs through it, already widely present during the promotion: how to legally prove the existence of the devil, when American justice institutionally recognises the Catholic religion? Or how the Johnson case condenses the ideological contradictions of Uncle Sam?

Despite a few formal tics, the first few minutes suggest a thematic richness in contrast to the first two opuses, especially since the decision to weaken one of the two forces involved reaffirms the humanity of the couple, once transformed into a duo of superheroes of the stoup. However, once the trial in question begins, all hell breaks loose. The screenplay evacuates the question it has been asking all along with a simple referential gag to invent a new generic antagonist and completely obscure the legal and media repercussions of the case.

Conjuring 3 shies away from its promises and simply waves its old scarecrows out of the wardrobe, without even bothering to make them more threatening than usual. Once the first third is over, the film launches into a tunnel of horrific banalities. It relegates its premise to an alternating montage, squandering its few narrative cartridges with suicidal casting choices and obvious mythological facilities, until a climax that recycles the worst of Wonder Woman (yes, it does), sepia flashback included.

Whether it’s because of the conclusions of the real trial, which are only moderately in line with the saga, or because of the specifications of New Line and Warner, who didn’t want to let their golden goose go off the rails, The Devil made me do it (true original title!) ends up not talking about the devil or compulsion, but rather about predictable jumpscares and cheap curses.

It’s all the more unfortunate that Chaves is not James Wan. And if the latter himself, along with his collaborator David Leslie Johnson, scuttled the script to base his production solely on the famous “terror scenes”, the author of The Curse of the White Lady struggles to ape his mentor’s style. All that’s left for Conjuring 3 is a string of supposedly horrific sequences, following one another at such a metronomic pace that you’d swear they were organized by an algorithm.

Fortunately, the director can count on Michael Burgess, an actor converted to photography with a fair amount of success. His work had already distinguished Annabelle: House of Evil from the other clones of the saga, but he surpasses himself on this third opus, taking advantage of finally getting out of the confines of the house to bring a whole palette of nuances to the traditional play on chiaroscuro dear to the licence. This was necessary to compensate for the lack of relief of the direction, which, crushed by the weight of the excellent first film, vainly tries to pay tribute to the work of its author.

Seemingly easy to duplicate, Wan’s direction cannot bear to be reduced to the fashionable academicism, especially when its playfulness is only partially replicated and it is butchered with intrusive inserts. Where the first few minutes of Conjuring 2 took us into tunnels of fear with long shots that gave us no respite, Conjuring 3 can’t help but multiply the counter-shots in the most stressful situations. A regrettable hunt for the “reaction shot”, since it diminishes the best effects and adds a little more predictability to the innumerable jumpscares of the test, all artificially boosted by an ever more gruff sound mix.

After seven films, the tricks repeated ad nauseam inevitably begin to lose their effectiveness, and the visual traps set by the director are far too crude to deceive an audience that is used to the exercise. Chaves is so aware of this that he awkwardly tries to compensate for the weakness of certain scenes with a game of frontal references, which are quite novel and sometimes amusing. The diversion works from time to time. The Exorcist is here…

The Exorcist quote is less sacrilege than a wink since the sequence that follows is probably the most striking in the film. It adds a layer of spectacular to the blasphemies that characterise the genre. As for the assumed inspiration of The Jane Doe Identity, it was inevitable, as André Øvredal’s very sympathetic haunting is likely to influence horror cinema for many years to come.

In the end, it is when he summons lighter references that the film’s academicism stands out the most. Thus, the rehashing of one of the most iconic sequences from Freddy’s Nightmare only highlights the poverty of the attempt at homage. Renny Harlin’s completely delirious cult scene was not content with a “creepy_face.JPEG” and a lazy jumpscare. It tried as best it could to surprise the viewer. To surprise them.

Finally, Conjuring 3 reflects the weaknesses of the wave of horror films of which is supposed to represent the pinnacle. By dint of relying on the same mythological, in this case theological, without ever daring to question them, they ended up defining themselves only by their stereotypes. And when meaning has disappeared, sacrificed for the sake of form, the only things that remain are ready-made frameworks, into which the films slip by themselves, nipping in the bud all logic… and all fear.

The cowardice of the feature film’s script, which completely misses its subject, goes hand in hand with the uniformity of its structure and effects. To create new sources of terror (at random, Satanism), one must know how to explore their limits, their implications. And this is exactly what this third opus fails to do. It touches several times on the questioning of the Warren’s Catholic dogmas (the exposition, the character of the former priest, mirror of their past personalities, the treatment reserved for Ed), but never moves away from them. And so these dogmas end up becoming archetypes, whose absurdity ends up generating more laughter than startles.

All the qualities of Conjuring 3, led by the performance of the main duo of actors, always impeccable, are therefore useless as soon as the Warrens become a commercial pretext. This is why this universe struggles so much to renew its bestiary, once again struggling, between make-up barely used to enhance the jumpscares and anecdotal final boss.

The very end of the climax, on paper ultra-spectacular, is still using the same tricks, proving one last time that blindly conforming to a franchise without even fulfilling its promises only leads to frustration, but surely still plenty of greenbacks. Because it’s still a made-in-the-USA movie, and as the real Warren knew very well, stale, media-savvy biblical overtones often make a fortune.

The Conjuring: The Devil Made Me Do It

Conjuring 3 finally allows the saga to tell something... before sinking into easy jumpscare and cheap commercialism. The disappointment is all the more bitter.