Mafia III – Crime Does Not Pay [PS Plus] REVIEW – After six years of hiatus, we can finally take part in another bloody Mafia adventure. The first game, originally developed by Illusion Softworks (2K Czech) in 2002 was an absolute hit on PC and old generation consoles (PS2 and the first Xbox). Mafia 2 in 2010 was perhaps even better in certain aspects, and we were certainly hyped when Mafia III first announced… Was the game worth the wait?

In the game, you assume control of Lincoln Clay, a Vietnam War veteran who is on a quest to seek revenge for his friends, who are murdered by local mobs. We are in 1968’s New Bordeaux, a reimagined version of New Orleans, with the open world being larger than the Mafia and Mafia II maps combined. 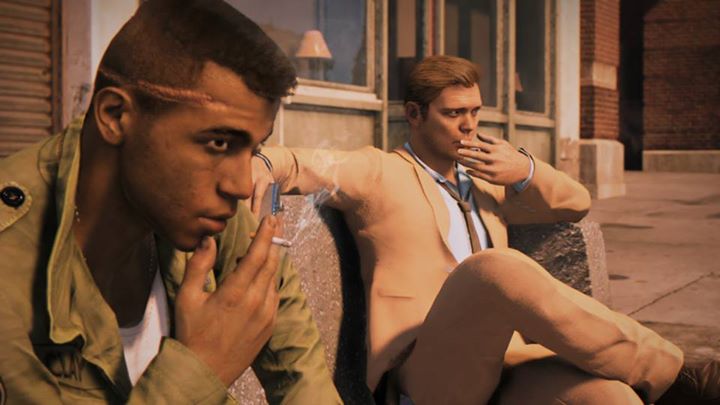 As a boy, Lincoln was adopted by black mobsters and later served in the Vietnam War as a special forces soldier. After being discharged, he returns to New Bordeaux (a fictionalized version of New Orleans) and reunites with his friends in the black mob, led by his surrogate father, Sammy Robinson. However, all is not well in a turf war with the rival Haitian gang has put Sammy in debt with Sal Marcano of the Marcano, crime family.

Lincoln meets with Sal, who insinuates that Sammy is no longer fit to rule the black mob and suggests Lincoln take his place. However, Lincoln refuses, and to pay back the debt; he works with Sal’s son Giorgi to rob the Louisiana Federal Reserve…

I don’t want to spoil the rest the story, but it’s truly on par with the two past Mafia games. Familiar themes like friendships, betrayal, revenge are all part of the scenario, but thanks to the narrative told in a movie-like, interesting way, with flashbacks, documentary styled interview of older survivors of the game events it never gets clichéd or boring.

Also, we have to note, that the cutscenes are nothing short of breath-taking, with an extreme amount of a level of detail on the face of the protagonists. Shame, we can’t make the same positive comments about the rest of the graphics and the game as well…

No, there’s no actual roller-coaster in the title (although there’s a funpark, which has a major role) what’s a real rollercoaster is the graphical quality in general. I already mentioned the astounding level of detail of the characters during cutscenes and the same can be said about their animation and general looks. During nighttime, the city looks nice too (even if nothing special) with lots of details poured into the depiction of the era.

Cars look okay; they are from the sixties as well, and while they are not that pretty, they certainly look authentic.

During daytime, unfortunately, it’s whole different story. Lots of the textures are blurry, the city from afar, for example, look worse than games I played in early 2000, including the PC version of Grand Theft Auto III in 2001! The clouds were particularly fugly; they look like something made in the nineties. I cannot even fathom, how could quality control let this aberration out. While many parts of the game are really nice, other parts feel like they are from PS2. It feel like the graphical department didn’t have time to finish its job, and they left placeholder graphics in the “final” game.

To be a bit less harsh, we also have to mention, that animation-wise the game is also excellent – at least concerning combat and executions which are brutal and visceral, with headshots and knife executions so realistic I’ve perhaps never seen in any game and (besides the fact, that it’s also bugged) the gunfight is also excellent. 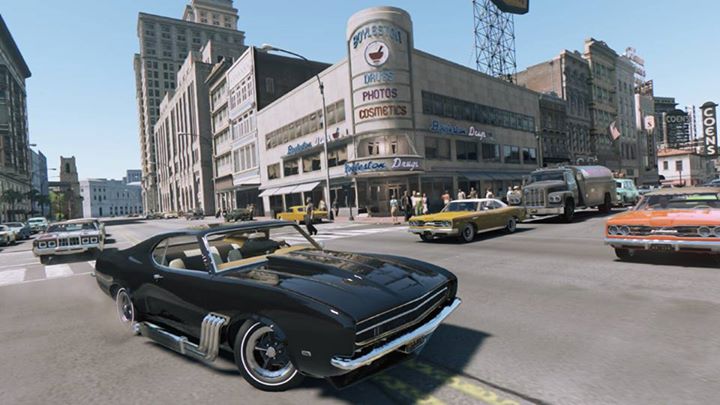 Mafia III is a car-driving game, where the word “buggy” isn’t a car type…

Besides, the graphics being severely outdated in many parts of the game, Mafia III is also unbelievably buggy. I have yet to remember one game which had so many bugs in recent years. In fact, the game feels like it’s still in the alpha state since there are so much more or less serious bugs in it.

First, there are the “usual” more or less hilarious clipping errors: dead enemy stuck textures, Lincoln Clay, stuck in textures, car stuck in asphalt, you name it. Then we have AI pattern bugs, like a mobster trapped in its path while trying to investigate who whistled at him. I also encountered especially hilarious bugs, like a mobster levitating below the chair, where he was supposed to sit and don’t giving a damn, that I just shot every one of his fellow gangsters.

And then we have the less funny game breaking bugs, like the ladder, which I was supposed to mount, or else I couldn’t advance in the game, and which “magically” appeared about 5 minutes later I was there. If wouldn’t inadvertently came back; I would still search for the way up. 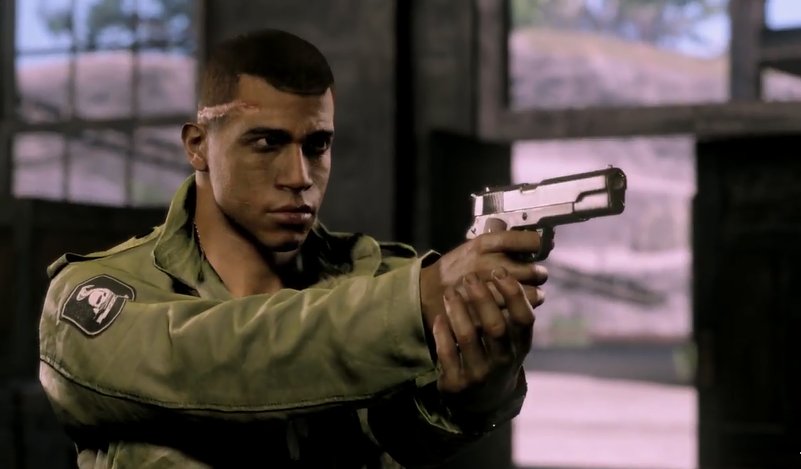 “I don’t feel I have to wipe everybody out, Tom. Just my enemies.” (The Godfather II)

Now, that we know that the story and cutscenes are both excellent, the graphics are a mixed bag and the game is seriously bugged, what about the gameplay? Should we expect at last an open world game, which is a bit different, then everything else that we’ve seen so many times? The answer is simply and sadly: no. Mafia III shamelessly borrows every gameplay clichés and major mechanics we’ve already seen in other open world games like the Grand Theft Auto, Assassin’s Creed, Far Cry and other similar series.

Like in the Assassin’s Creed games, we have to conquer territories by killing enemy bosses, raiding bases (as it’s a Mafia game, it means: brothels, bars, liquor shops here) and when to we have attained a certain amount of “damage” done, we need to confront the boss to conquer the territory and give it to our associate against a fee from them.

Besides those main (and after a while boring and repetitive) “wipe out everybody” kind of missions, we also have the “catch that guy,” or “kill that other guy” kind of missions, which of course involves a long car and on foot chase. To say that we are nowhere near the creativity of a Rockstar open world game would be an understatement.

On the plus side, I have to admit, that the gunfights are rather fun and certainly visceral, sneaking and killing enemies with brutal knife stabbings are also satisfactory, and the fact that you have to plan your approach in most cases (at least on hard level) is also a big plus to the gameplay department of Mafia.

I also had fun at driving those old lookalike cars from the sixties, which are very well animated, and they behave rather realistically, especially while using “simulation” mode.

“Leave the gun. Take the cannoli.” (The Godfather)

As the first two Mafia games were among my all time favorites, you can imagine the level of my disappointment about the third episode, which is only slightly better than average. Yes, the story still rocks, yes, the era and ambiance are fantastic, yes the soundtrack from the sixties is outstanding as well (perhaps one of the best I ever heard), but uninspired, copy pasted open world gameplay (with fewer options, than in other similar titles), severe graphical issues, and hair-raising bugs drags down severely this latest episode.

I don’t know what happened to quality control, who is the responsible for the fact, that this game could see the light at this sorry state, but if I were at 2K’s bosses place, I would already put his horse’s head in his bed.

– One of the worst quality controls EVER!
– raphical glitches, the game is plain fugly in some places
– Boring, copy pasted gameplay from other open world games

REVIEW – After six years of hiatus, we can finally take part in another bloody Mafia adventure. The first game, originally developed by Illusion Softworks (2K Czech) in 2002 was an absolute hit on PC and old generation consoles (PS2 and the first Xbox). Mafia 2 in 2010 was perhaps even better in certain aspects, and we were certainly hyped when Mafia III first announced… Was the game worth the wait?   In the game, you assume control of Lincoln Clay, a Vietnam War veteran who is on a quest to seek revenge for his friends, who are murdered by…
Mafia III – Crime Does Not Pay [PS Plus]
Mafia III – Crime Does Not Pay [PS Plus]
Herpai Gergely (BadSector)
Mafia III had every ingredient to be the next killer Mafia title: an excellent story with excellent cutscenes, representing a fascinating era in the US history, with tons of cars and a killer sixties soundtrack. Unfortunately, the game is severely dragged down by hair-raising graphical glitches, poor optimization,  and other bugs, which would be even shameful in the last century.

Mafia III had every ingredient to be the next killer Mafia title: an excellent story with excellent cutscenes, representing a fascinating era in the US history, with tons of cars and a killer sixties soundtrack. Unfortunately, the game is severely dragged down by hair-raising graphical glitches, poor optimization,  and other bugs, which would be even shameful in the last century.