Devil May Cry 5 – The Goth, The Punk, And The Rocker REVIEW – After nearly 11 years (not counting the reboot), the original Devil May Cry series is back. Nero and Dante are once again ready to bust some demon heads in and save the world once again. This time it is a demon called Urizen is trying to take over the world, and rule over both Humanity and the Underworld.

Instead of one or two characters, we get a total of three characters to play throughout the campaign. Dante is back, with its usual carefree rocker style. Nero is also making its second grand appearance from DMC4 and he is less stressed out about Kyrie. Finally, we have V who is a mysterious Goth, looks like Adam Driver and quotes Blake all the time.

The Tree of Hell

With three playable characters and with twenty missions Devil May Cry 5 tries to flex its muscles with a brand new story. A story that pretty much starts with bringing back all of our favourite side characters such as Trish and Lady, plus we get a few new ones to round up the cast. The story begins with Dante, Nero and V fighting against an insanely powerful demon who does not even need to get up from his sweet demon chair to defeat all three characters. Nero and V have to retreat from the initial encounter, and Dante goes missing. A month later Nero returns to the city of Redgrave, where most of the story takes place, to finally put an end to Urizen’s rule, plus to chop down a giant demon tree.

The story is pretty basic, with a few twists and turns, but it just reminds me of a Saturday morning cartoon, or a Shonen Anime, where the main characters have to get tougher through trials to finally beat the big bad enemy. For what it’s worth the story is more of a spectacle, and not here to make you think. Devil May Cry was always about big epic fights, snarky comments, and gigantic bosses with tough as nails encounters. There are twenty missions, and a couple of secret missions, plus you can also select who you want to play as in certain missions – for added replayability. 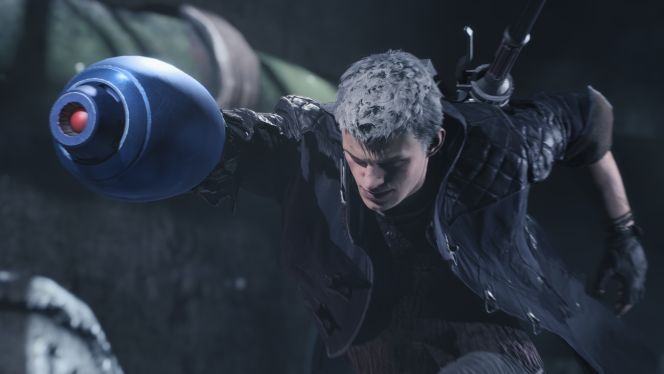 Luckily, the gameplay itself for all three characters are severely different, and the player will need to utilize different types of tactics. V, for instance, is the most unique one who summons familiars for the fight for them as the only thing he can do is land a finishing blow on the enemy. Nero has his own grappling hook, and different kinds of robot arms he can use (if you have the deluxe edition you even get a Megaman buster arm). Then there’s Dante who gets to use multiple different types of melee and ranged weapons and his usual four style skills.

Combat is a lot of fun, and the style meter will always give great feedback to how well you are doing in the missions. The music also becomes louder more intense as you do better in combat. All three different characters provide new challenges and have their own weaknesses. In the end though seeing enemies get smacked around, and even comboed to hell is a great thing to see. As mentioned above DMC5’s combat is the only sort of fun. I, and my main editor BadSector noted during playing the game that it is incredibly easy. Sadly while playing we were stuck on Devil Hunter mode which is the normal mode, but we still found it a piece of cake.

The game in the first half will be boring for most people unless you are really bad at hack n’ slash genre. Because the enemies are so easy to deal with I found that most encounters initially are over before they even began. There is not enough time for the player to have fun with the encounters, and it just takes away from the fun of the game. In fact, there does not seem to be enough enemies on normal mode, plus they are also really slow in terms of attacking the player character. Sons of Sparda mode fixes this issue, by making the enemies tougher, mixing up the order of how enemies spawn, and you get tougher enemies with quicker response time.

That made the game a hundred times more fun and challenging compared to Devil Hunter, but the only way to get Sons of Sparda is to complete the game on Devil Hunter or to get the secret ending at the beginning of the game. Also, Sons of Sparda mode becomes easier since it is practically a new game plus mode where you get to keep all previous skills and unlocks from Devil Hunter mode. 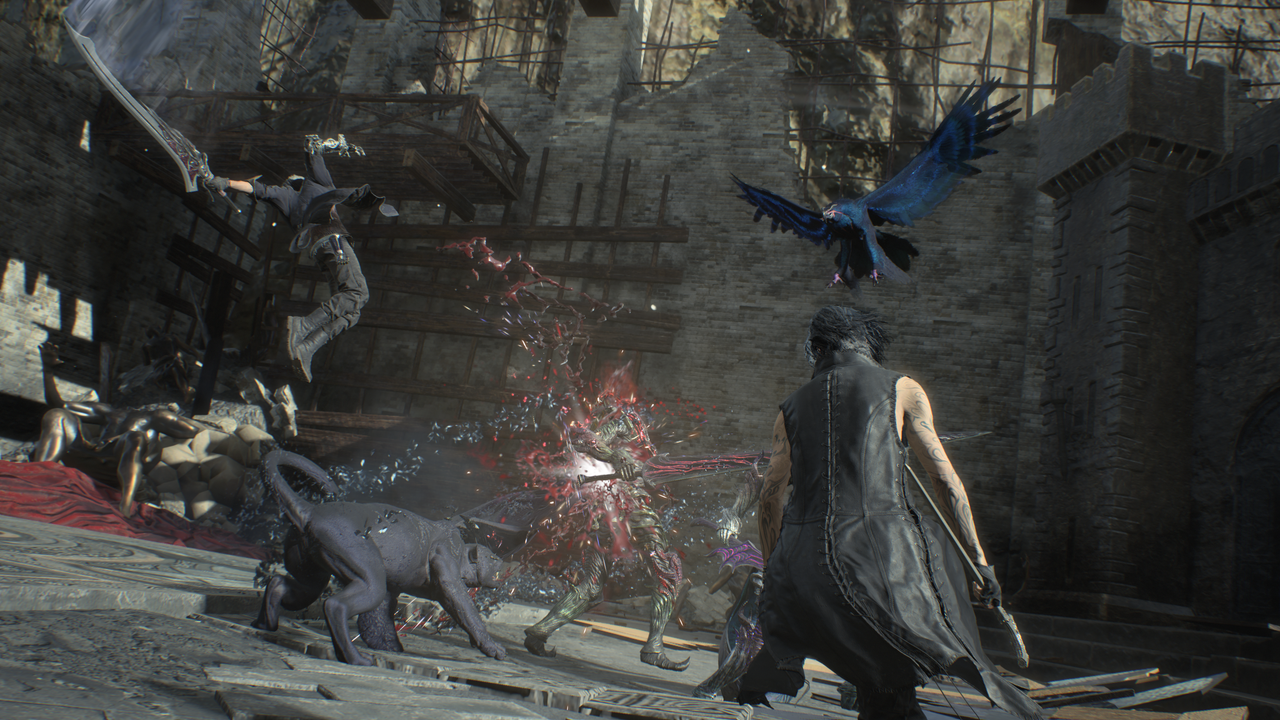 DMC5 looks one of the best games in 2019, and the visuals/sound design is superb. The character models and monster designs look something out of next-gen  There is scale to everything and the bosses do look gigantic, the fights epic, the whole area is filled with effects, sword clashes, plus explosions. The movement and animation is a marvel to look at, only Red Dead Redemption 2 surpasses it.

However sadly while everything has a next-gen feeling to it, the only thing that is quite bland is the environmental design. While there is no backtracking like in DMC4, the environments pretty much are Ruined city or Weird Tree insides that are grey.

It feels a bit awkward to say there is no backtracking like in DMC4, but in reality, you just run in the same environment with all three characters. Not to say those environments do not look detailed, but feels monotonous. Although I do have to say that Capcom put in a bit of dynamic destructibility with most of the bosses, and even in some of the encounters. So while the engine not only looks good but offers destructibility to make the fights a bit more dynamic.

Everything looks great, but that difficulty did make two-thirds of the game a bit boring. There is also barely any penalty for using gold statues or red orbs to resurrect, which made certain aspects of the game trivial.

In the end, Devil May Cry 5 was made for the fans, it is not a reboot, and newcomers will have fun with it. New players will not be lost and will enjoy the frantic combat, and while it might seem that I did not enjoy the combat, that was mostly due to the difficulty being too easy. Once on higher difficulties everything just clicks better and encounters work better. It could have used a bit more variety in terms of the environment. Still, it is a good game, but not as excellent as I thought it would be when I first started playing it.

As a fan of the series though I enjoyed it, and anyone who wants to jump into the series can do so, but some aspects might be confusing. A fun hack n’ slash game, and one of the best looking games of 2019.

REVIEW – After nearly 11 years (not counting the reboot), the original Devil May Cry series is back. Nero and Dante are once again ready to bust some demon heads in and save the world once again. This time it is a demon called Urizen is trying to take over the world, and rule over both Humanity and the Underworld.   Instead of one or two characters, we get a total of three characters to play throughout the campaign. Dante is back, with its usual carefree rocker style. Nero is also making its second grand appearance from DMC4 and he…
Devil May Cry 5 – The Goth, The Punk, And The Rocker
Devil May Cry 5 – The Goth, The Punk, And The Rocker
Dante
A fun and true linear singleplayer hack n’ slash title, with some interesting new ideas, fun combat, but very easy difficulty even on normal, and boring environments.