REVIEW – Dontnod isn’t going fast. They don’t release the episodes as quickly as Telltale did in the past, but in return, we get somewhat heftier chapters of Life is Strange 2, which is slowly shaping up to be amazing, even though we have hit the midpoint. The tour continues in style…

So the story is about how Daniel and Sean, the two brothers escape from the United States on its West coast to reach Mexico. In the previous chapter, we were in Oregon, but now, we are in California. I can easily say that we should sit back, as events slow down here a bit, which tends to happen in episodic games, without exceptions.

I love how at the beginning of the chapter, we get a quick recap on how we go from Seattle to the place where we’re at the moment. It somewhat reminded me of the final season of The Walking Dead, and I admit that it was a beautiful idea from Dontnod. The brothers have joined the group of hippies, so people like Cassidy and Finn get a bigger role in this chapter called Wastelands. The relationship between Daniel and Sean get strained in the third episode, as they effectively get separated from each other, but it’s still a good thing as the two protagonists go through something called character development. In the case of Sean, we’ll get a cutscene where he talks with his father (his name is Esteban if I remember correctly). Meanwhile, he’ll feel that he is starting to find his place, but his little supernatural-powered brother, Daniel, will have the usual childhood jealousy, and he’ll feel like he is separated from his brother. It gives this chapter a tone – there will not be a lot of action, as the environment itself holds things back.

…not the way you would think, though. The Californian woods look well-detailed and sophisticated, especially how it looks like a perfect mixture of the wildlife and the humanity living together in peace. It’s a calm little region where you can hear others chatting with each other next to a bonfire – I think it has a quite relaxing tone to it. I’d get back to the hippies, though: there is some action going on, especially with marijuana. It touches upon modern politics once again, as cannabis isn’t entirely legal in all fifty states of the US, and – as was the case with the first two chapters – Dontnod tries to put its hand into current political events with this move. A clever idea, if you asked me. 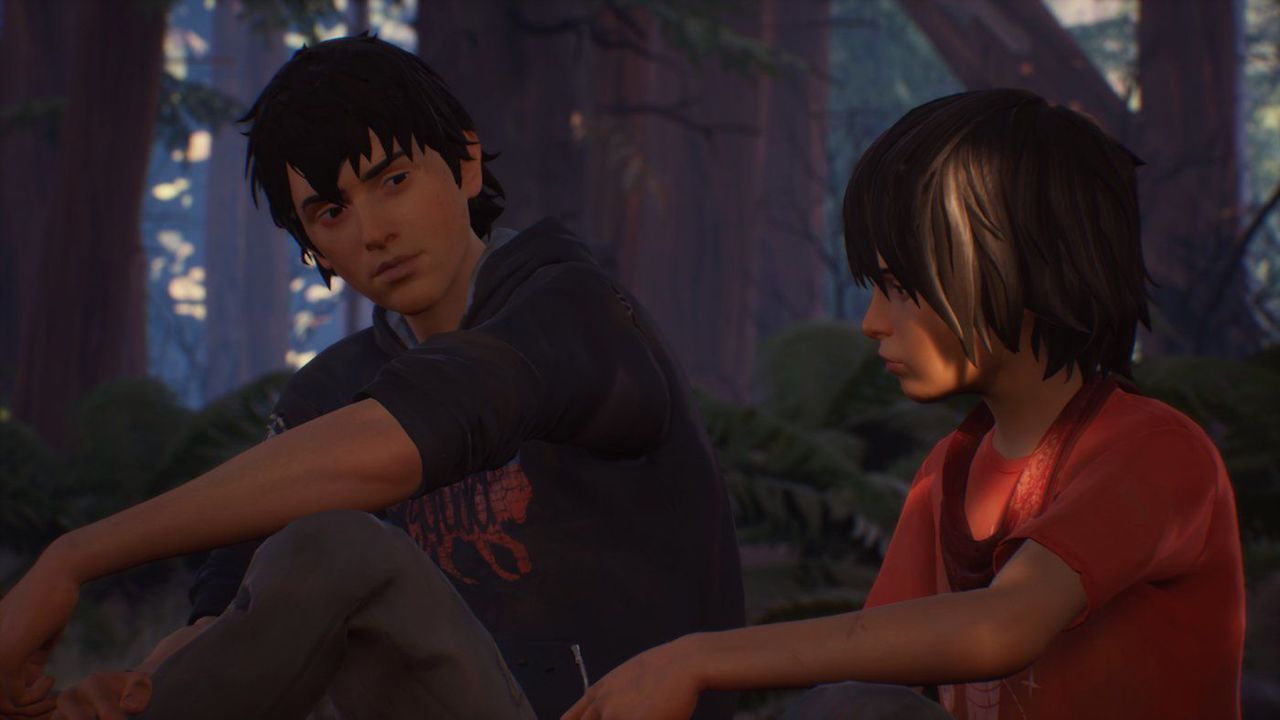 The problem with this chapter is that it slightly felt predictable here and there, especially how those dramatic scenes came up. It ruins the otherwise excellent result: imagine sitting back, but not on your usual chair but on a sweaty loveseat or something like that. Dontnod effectively has caged itself by how they limited Daniel’s skills and powers in Wastelands, and there’s also not a lot of interaction in this episode either. There were less of those scenes here than in the first two episodes.

Still, I spent a good time with this chapter, especially how I believe the decisions that we have made in the previous adventures could spread out the scenarios, and even though it doesn’t matter how we have treated the brotherly relationship between Daniel and Sean, their connection is put to a test in the Californian woods, which could be a good basis for the future episodes (which are indeed in the future, as you’ll have to wait several months…), bringing some potentially exciting moments to the table.

So let’s end this monologue (that I write half-asleep, but at least I hope I’m not going to be bothered in the next weeks) with an obligatory seven and a half out of ten, because the third episode of Life is Strange 2 isn’t BAD, but it isn’t STRONG either. Does that make sense? Let’s just say that this is the point where the adventure tones itself down a bit, and I’m sure that it will have some tough moments in the future until the Diaz brothers (and no, I’m NOT going to do a Scarface joke here…) get to Mexico. The licensed soundtrack gave some good vibes, and the imaginary bonfire is a relaxing moment in this May evening. At least the depth (by that, I mean the story and the characters!) is on song. I don’t think it will be a problem in the remaining two chapters.

Now that I mentioned those two chapters, let me just say that the fourth episode will make us wait until the end of August, and the finale will follow suit in early December. While I appreciate that Dontnod has published the release dates for the episodes, but making us wait for this much is slightly annoying in my opinion. 7.6 points.

REVIEW - Dontnod isn't going fast. They don't release the episodes as quickly as Telltale did in the past, but in return, we get somewhat heftier chapters of Life is Strange 2, which is slowly shaping up to be amazing, even though we have hit the midpoint. The tour continues in style...   So the story is about how Daniel and Sean, the two brothers escape from the United States on its West coast to reach Mexico. In the previous chapter, we were in Oregon, but now, we are in California. I can easily say that we should sit back,…
Life is Strange 2 – Episode 3: Wastelands – Hotel California
Life is Strange 2 – Episode 3: Wastelands – Hotel California
V
California dreaming.

User Rating: Be the first one !
Spread the love
Tweet
Tagged DONTNODLife is Strange 2 - Episode 3: Wastelands REVIEWPCPlayStation 4Square EnixXbox One