They have a third announcement as well, but this one will benefit the Nintendo Switch owners.

Let’s start at the beginning: THQ Nordic, which recently acquired Piranha Bytes (Gothic and Risen series, ELEX – the latter is teased to get a sequel…), prepare two major announcements for the E3. Last year, THQ Nordic GmbH (the subsidiary with the Austrian HQ) decided to stay away from the event to stay home and watch the football world cup. They can’t pull that card this year.

At the end of February, they held an Ask Me Anything session, which became infamous. During it, a post from THQN_Reinhard caught the attention, as he attached an E3 screenshot. We’ll name the first two titles on the list: Darksiders: Genesis, Destroy All Humans. The former could be a spinoff title (unless this will be the subtitle of the fourth main game, but seeing how Darksiders III came out last year, IV would be too early), and the latter was an open-world action-adventure franchise one and a half decades ago, parodying the Cold War-era alien invasion films. THQ Nordic might revive it, which could be a pleasant surprise. As the publisher has acquired a ton of IPs and licenses since 2013 (we can’t even remember all of them), it was time for them to pull something similar.

There’s something else, too. Let’s see what Koch Media‘s website lists. How are they related to THQ Nordic? Well, in February 2018, THQ Nordic AB (the parent company with the Swedish HQ) acquired Koch Media, and via that acquisition, they got Deep Silver as well. The site lists Darksiders II Deathinitive Edition for the Nintendo Switch! They also listed a release date: August 6, which falls on a Tuesday, making it too much of a non-placeholder date… and the port would cost 30 dollars/euros.

So THQ Nordic got its plans spoiled. But what on Earth will Darksiders: Genesis be? We’ll find out at the E3. 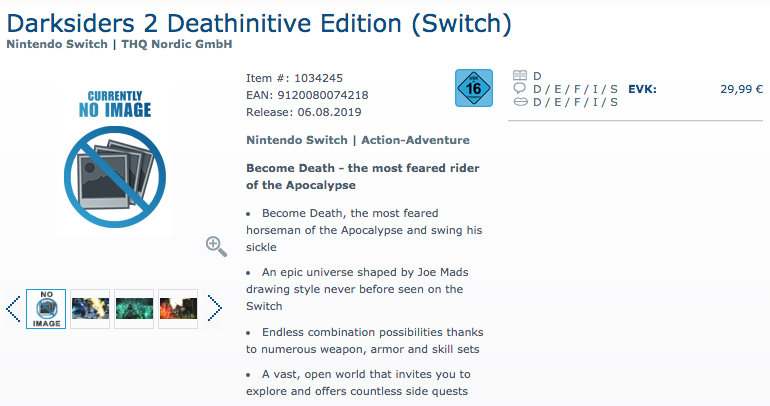 This leaked when they did there AMA. The two games are Destroy all Humans and Darksiders: Genesis. pic.twitter.com/hndKy3X9o2