The Witcher: Why Is Geralt Never Nude? The Answer Is Revealed 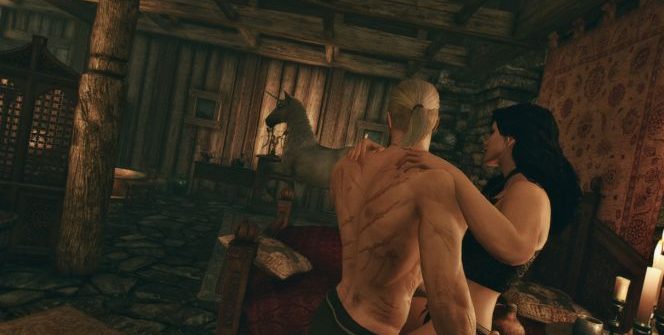 He is someone that can easily bring a woman to bed, but he’s never completely naked. There is a reasoning behind this.

Geralt of Rivia was never fully nude even in The Witcher 3, as the rating boards didn’t necessarily accept nudity for the protagonist. (Then again, if it was depending on the character, then Geralt would have been fully visible if you get the hint…) CD Projekt RED talked about this to a German publication, namely GameStar.

The German rating board (USK, which likes to put huge rating logos on games’ cover art…) doesn’t like if a game allows the player to control a fully nude character. Other boards follow these footsteps, too. Instead of making different scenes for other countries, the Polish dev team has chosen the lowest common denominator and made Geralt wear some underwear in… these adult scenes. (Except for the unicorn scene with Yennefer.) This is why you can’t see his… reproduction organ, to use some different terminology. The NPCs are exceptions, though: as we never control them, they are allowed to run freely around without wearing any clothes.

Phillip Weber, the quest designer, told GameStar that when the player gets the chance to control the character, the game is always evaluated differently. The USK thinks that it is development-impairing, or even youth-endangering to control a completely naked character in-game. However, The Witcher was never meant to be played by such young children.

How will Cyberpunk 2077 handle this? Remember, this game has been rated 18+ in Brazil, and it will feature sexual acts (possibly from a first-person perspective). Will they go down the softcore route, and not show the act itself to avoid getting frowning faces by the rating boards?

Still, we got an answer after all these years.