REVIEW – In case you did not have a Wi U in the past six and a half years, then you could not experience this game, which in my opinion was made by a genius. Without Hideki Kamiya, there would be no Resident Evil 2, Devil May Cry, Viewtiful Joe, Okami, or Bayonetta – all these are memorable IP.

THIS re-release makes sense: instead of a not so successful platform, two, more popular consoles, and the PC got PlatinumGames‘ title. 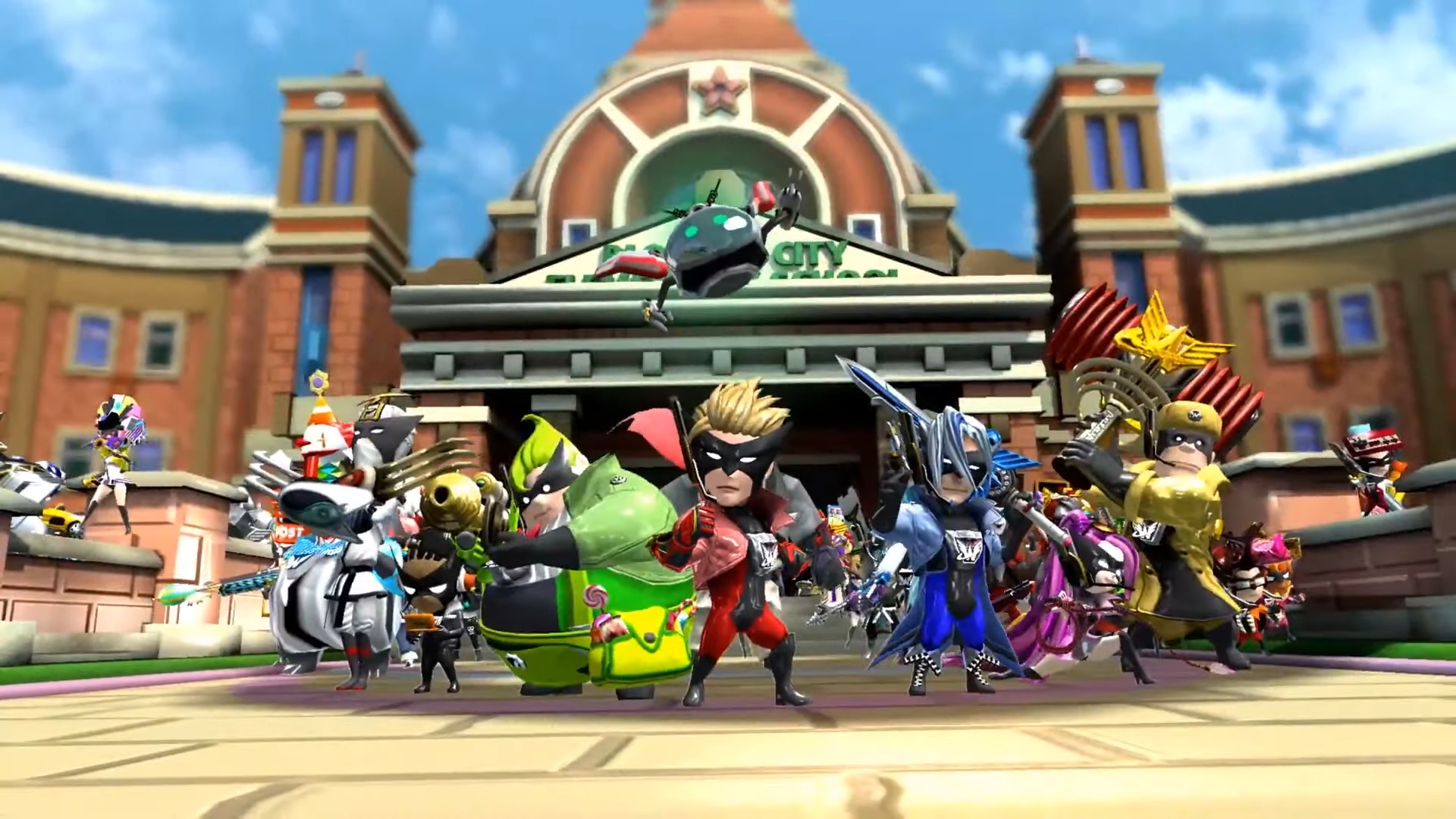 We’re talking about a superhero team – they protect humanity from the catastrophes and the aliens. The latter group is causing trouble this time around, so the team, led by Wonder Red, will have to save civilians and defeat the aliens. The twist here is that the heroes can group into several formations, depending on what you draw (with the consoles, you can do it, while on PC, you have to use the mouse) – if you draw a straight line, which for me is near impossible, as it is a fact that I cannot draw a straight line, you get into a sword formation. It’s a good idea to experiment, as depending on the character, the formations could change. If you draw a circle around a civilian, you can save them, and they can temporarily be recruited, and it is a good idea to help and save them, as the bigger team will result in a better possible formation, which could also be used to progress, as the formations are more for than fighting.

It’s funny how Kamiya himself is also in the game as Wonder-Director, and he’s essentially the super hard difficulty – he gets defeated by a single hit (which makes him lose all clothing except his underwear, lol), and you can also hear his voice throughout the attacks, including one of his meme comments (Ask your mom.). Whoever is in charge, the game will rate your combo-s, as yes, there will also be a score in this game, just like in an old arcade machine that ate your quarters ridiculously quickly. Completing the missions allow you to improve your skills (or get some that will benefit your playstyle), both offensive and defensive – anyone can find their respective skills. The experience is solid – it does put a twist into the gameplay here and there (as expected by Kamiya – he knows how to keep the players engaged), while the voice acting is enjoyable, and the music itself is worth listening to on its own, too. The visuals, however, are dividing: while the art style is outstanding, you can feel that The Wonderful 101 is somewhat old, and this is the point where I get to explain why The Wonderful 101 Remastered is better than Call of Duty: Modern Warfare 2 Campaign Remastered (a re-released story mode, unbelievable…), while it’s also technically weaker than that. It sounds weird, I know, but let me explain it…

Moving a Wii U game to other platforms is not easy. This flopped console (let’s admit it, it did not sell that well) had its GamePad that acted as a second display. The game’s Achilles heel is noticed here: it’s not that easy to draw the more complex formations, regardless of which platform you use, and due to the lack of the extra display, there’s another problem I have to bring up. You need to press a button to see what that extra information are that have been moved a different scene – in the original, all you had to do is just take a look at your GamePad. And I think the PC port is technically flawed. The frame pacing is bad (resulting in 59 FPS), and the Nintendo Switch performance is horrible. Look at DigitalFoundry‘s analysis. The game runs on 720p in handheld mode. But in docked, it’s 1080p, but 30-40 FPS. So the best gameplay experience is quite possibly on the PlayStation 4 Pro, which is unusual on a multiplatform release. The Xbox One was left out of my list for a good reason: the game wasn’t even launched on that console. (Which makes sense: the Japanese barely care about the Xbox, which is why Microsoft wants to acquire a studio in that country, and PlatinumGames’ cancelled Scalebound is also something we shouldn’t forget…)

So the game, due to its technical issues, gets a 6.5 average score. On the Switch, it runs so badly that it earns a 5/10 there, the PlayStation 4’s biggest issue is the lack of the second display (that’s why it gets an 8/10), and the PC’s bad frame pacing ends with a 6.5/10. It’s a good game, and it’s entertaining when it kicks in, but it wasn’t perfectly moved off of the Nintendo Wii U. It’s sad, especially in the Nintendo Switch’s case, as that should be a stronger platform (okay, the Wii U’s CPU had a higher clock speed, but with fewer cores, and it also had half amount of RAM, plus the GPU was older…), and the remaster was first planned for this platform. I’d wait with the purchase to see if PlatinumGames fixes it. On PlayStation 4, get it right away. The Wonderful 101 Remastered has a good concept, but its execution is far from perfect. PC – 6,5, PlayStation 4 – 8, Nintendo Switch – 5. (One more note: why is the PC version STILL geoblocked on Steam? It launches this evening. And they wonder why piracy is a thing?)

– Technical issues (bad frame pacing on PC, bad performance on Switch)
– The lack of second display can be felt
– It doesn’t look that beautiful

REVIEW - In case you did not have a Wi U in the past six and a half years, then you could not experience this game, which in my opinion was made by a genius. Without Hideki Kamiya, there would be no Resident Evil 2, Devil May Cry, Viewtiful Joe, Okami, or Bayonetta - all these are memorable IP.   THIS re-release makes sense: instead of a not so successful platform, two, more popular consoles, and the PC got PlatinumGames' title. Wonderful 100 We're talking about a superhero team - they protect humanity from the catastrophes and the aliens. The…
The Wonderful 101 Remastered – Kamiya Heroes 101
The Wonderful 101 Remastered – Kamiya Heroes 101
V
The good adventure failed on the technicalities.

The good adventure failed on the technicalities.