MOVIE PREVIEW – From visionary filmmaker, M. NIGHT SHYAMALAN comes Old— a chilling, mysterious new thriller about a family on a tropical holiday who discover that the secluded beach where they are relaxing for a few hours is somehow causing them to age rapidly … reducing their entire lives into a single day.

The genesis of Old began, quite literally, as a gift. For Father’s Day one year, M. Night Shyamalan’s three daughters had given him a moody, meditative, thought-provoking 2011 graphic novel, Sandcastle, by French writer Pierre Oscar Lévy and artist Frederik Peeters. The graphic novel, about a group of people vacationing on a secluded beach who discover that they are ageing rapidly, immediately sparked Shyamalan’s imagination.

After he completed his blockbuster “Eastrail 177” Trilogy, which began with 2000’s Unbreakable followed by 2016’s Split, with his 2019 smash Glass, Shyamalan began to dive into the script for what would become Old, transforming and elevating it into an existential thriller that grapples with some humanity’s most eternal enigmas— mortality, regret, love, commitment and the nature of time itself— and that poses deeply provocative questions: If you had to live the rest of your life in one day, how would you spend it? With whom would you spend it? What would matter most to you?

Shyamalan wanted to amp up the tension and the sense of mortal danger for the characters while preserving the confounding mystery and chilling dread that throbs beneath the narrative. “I wanted it to feel like you’re watching a two-hour Twilight Zone episode—which I love, the weirdness, trying to understand what’s happening,” Shyamalan says. “With Old, I never wanted the audience to feel safe. I wanted the audience to be figuring out one thing, now another and another and another, like the characters in the movie.” 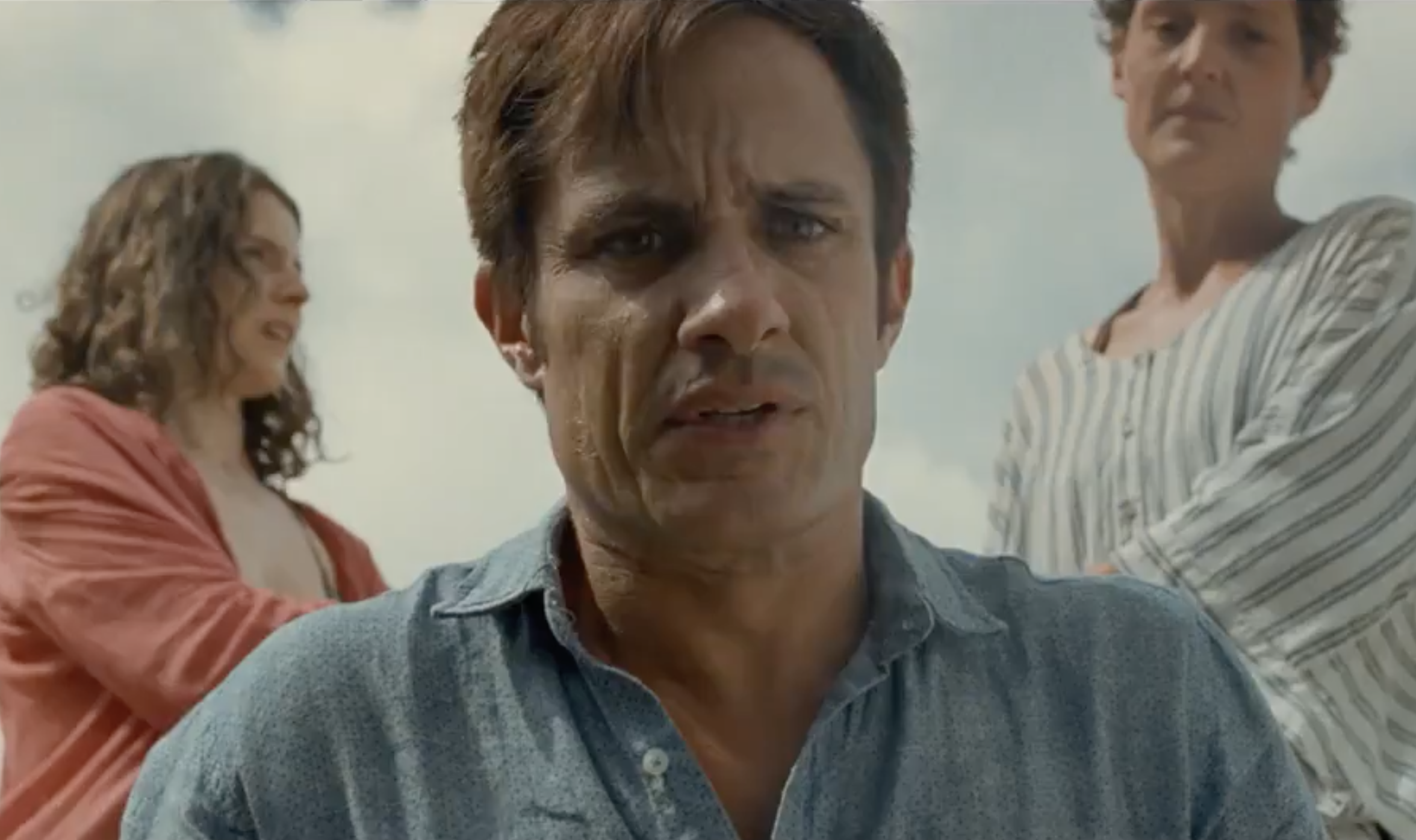 Indeed, a host of inexplicable phenomena awaits the group of unlucky vacationers after they book a stay at a luxurious tropical resort. When Old opens, husband and wife Guy and Prisca Capa (Gael García Bernal and Vicky Krieps) are embarking on what will be their last vacation together as a family with 11-year-old daughter Maddox (Alexa Swinton) and six-year-old son Trent (Nolan River). Guy and Prisca are planning to divorce, but they haven’t yet told their kids.

Arriving at the resort, the Capas are wowed by the high-end service. They’re greeted by the resort manager (Gustaf Hammarsten) and his assistant Madrid (Francesca Eastwood) with cocktails tailored to their tastes. The children are just as delighted. Maddox shyly takes note of the athletic teenage boys all around, and her outgoing brother Trent befriends a boy his own age. The two new pals even develop their own special visual language, a code that only they can decipher, which they use to pass secret messages to one another.

Despite the tension between Guy and Prisca, the Capas are excited to receive a special invitation to an exclusive beach operated by the resort, and soon, they and the children are boarding a shuttle for a day trip of surf, sun and sand. Joining them is another family: an intense cardiothoracic surgeon, Charles, (Rufus Sewell), his elderly mother, Agnes (Kathleen Chalfant), his much younger wife, Chrystal (Abbey Lee), and their six-year-old daughter, Kara (Kylie Begley). The driver delivers them to their destination, pulling to the side of the road and directing his passengers to follow a path that will lead them toward the water.

As the group on the beach grows to include not only the Capas and Charles and his family but also a rapper who goes by the moniker Mid-Sized Sedan (Aaron Pierre) and long-married couple Jarin (Ken Leung) and Patricia (Nikki Amuka-Bird), it’s not long before an unknown dead woman washes ashore on the beach and the adults realize, in quick succession, that they have no cell service, that they cannot leave the beach, and that the children are ageing rapidly, growing older right before their eyes. Old is a film that propels the proverbial “ticking clock” storytelling device to an unprecedented new height. The characters calculate that they are ageing two years every hour, reducing about 50 years of life into one single day. As every attempt they make to escape the beach fails, the characters ultimately must decide whether they’re going to spend the rest of their lives fighting, perhaps futilely, to free themselves or to accept the seemingly inevitable and make the most of the time they have left.

Yet for all the dark and terrifying events that befall the Capas and those trapped with them on the beach, Shyamalan is careful to note that he does not consider Old to be a horror movie. “I don’t make horror,” Shyamalan says. “That’s not what I would ever describe what I do. In horror, there’s almost a sense that death is a destination. I keep trying to do as I write to imagine the very worst things and then ask myself if I would survive them as a human being emotional. When I come back out on the other side, can I be stronger for that experience?”

Shyamalan long ago established his reputation for exquisitely crafted, cerebral and surprising thrillers—dating all the way back to his Academy Award®-nominated 1999 blockbuster breakthrough The Sixth Sense. Still, according to his closest collaborators, Old represents one of the most ambitious undertakings ever attempted by the accomplished filmmaker.

“This was honestly such a wild and outlandish premise, I told him, ‘This might be your wildest idea yet,’” says Shyamalan’s long-time producing partner Ashwin Rajan. “This is definitely one of the most challenging movies he’s ever done. He’s gone back to what’s inspired him as a storyteller, and that is telling these very contained, character-driven stories that have this incredibly large threat at their centre and exploring how these people deal with that as characters.”

Notably, for the first time ever Shyamalan is working outside the United States and outside his hometown of Philadelphia, which has provided the backdrop for his previous films as well as his current Apple TV+ series, Servant. Old was filmed in the Dominican Republic. “We’ve taken Night and his storytelling out of his hometown, and we’ve gone to a different country,” says Old producer Marc Bienstock, who previously produced Shyamalan’s films The Visit, Split and Glass.

Old executive producer Steven Schneider, who also executive produced The Visit, Split and Glass, says the result is a film unlike any ever made. “What’s most impressive about Old is how much Night is juggling here,” Schneider says. “The graphic novel is more like a mood piece, really; a loosely plotted, existential parable. Night managed to get inside it, make it very much his own. Every character arc is distinctive. He’s able to tell a deep and distinctive story filled with themes that are common to every one of us. Especially nowadays. He’s all about capturing what is fantastical, terrifying, weird and surreal on screen.”

To add a greater depth of character and authenticity to this compelling story, Shyamalan also felt strongly that the actors in the film should hail from all areas of the globe, so he set out to cast Old with dynamic performers from an array of racial and national backgrounds.

“Every film I do has to represent something about where I am, and where I am right now is celebrating the fact that I’m an immigrant,” Shyamalan says. “I just quietly put that aside from my whole career. I make movies in the United States. I was born in Puducherry, India, and I’ve been lucky enough to tell stories to everyone around the world and do it from Hollywood. To have a cast representing that—a cast with a Mexican accent, a German accent, and English accents? It feels really beautiful.” Every Frame Of The First Trailer For The Last Of Us And The Music Is Reminiscent Of The Game! Full Goose Bumps Mode! [VIDEO]