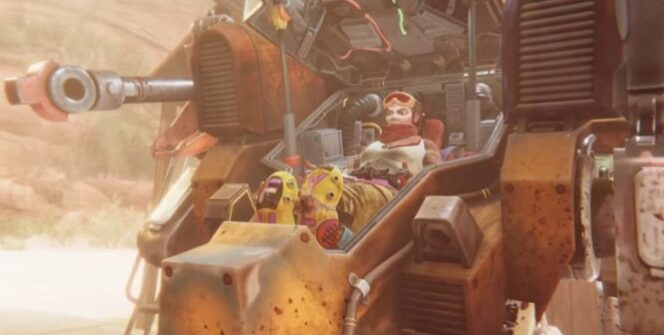 Annapurna Interactive recently revealed several games during a broadcast, and The Lost Wild was among them in today’s news. However, we’re talking about Dinogod’s game (or DINOGOD, following the perhaps forgettable trend…). Still, contrary to their name, it won’t be about dinosaurs but a three-dimensional action game with a behind-the-shoulder camera.

Here’s the game’s overview from its Steam page: “Bounty Star is an over-the-shoulder 3D action game that marries mech combat and customization with farming and base building. The player takes on the role of a broken but powerful ex-soldier named Clem, a war veteran, talented fighter and expert mech pilot. Clem attempts to shed the guilt and shame of her past and become a legitimate force for good in the Red Expanse, a post-post-apocalyptic version of the American Southwest.

You pilot the Desert Raptor MKII, a Mech of extraordinary power. It is a highly-customizable battle vehicle that can be equipped with a variety of offensive systems: heavy, high-powered melee weapons, steam-powered hydraulic siege weapons, explosive firearms, and more. It can also be fitted with various defensive systems; high-speed thrusters, boosters for dashing, and riot shields, among others.

The Red Expanse is a rich farming and mercantile region plagued by violent criminals and dangerous beasts. The government that remains outsources justice to experts like Clem—bounty hunters who are free to pursue their targets into whatever hazardous corners of the world they hide. She’ll fight through many corners of the region and deal with these marks as she sees fit. Clem comes into an isolated, run-down garage that is a suitable base of operations and home—barely. Build water and power supply lines, grow and cook food, produce ammunition and fuel for combat, and raise animals. This decrepit ruin has much potential, but it must grow alongside Clem.”

The unusually named Bounty Star: The Morose Tale of Graveyard Clem will be released in 2023 for PlayStation 5, Xbox Series, PC (Steam), PlayStation 4 and Xbox One. It will also be available on (Xbox) Game Pass.