God Of War Ragnarok: ESRB Rating Is Public; Game Length Might Have Leaked?! God of War Ragnarok has been given an ESRB rating, and a summary of the level of violence players can expect in the game, as well as how long it will be and how much of the walkthrough animation has been packed in…

God of War Ragnarok has received a rating from the ESRB, which shares more details on the game’s level of violence and profanity. One of the year’s most anticipated games will be officially released next month on November 9. It is the second God of War game set in Norse mythology, and Sony has confirmed that it is the final game in the saga.

The ESRB’s board of directors has given God of War Ragnarok an M rating for the “Blood and Gore, Intense Violence, Strong Language” present in the game.

A summary on the same page explains the reasons for the M rating. The ESRB confirms that players engage in furious hand-to-hand combat against human-like enemies and fantastical creatures such as dragons, centaurs and trolls. Players can use the Leviathan Axe and Blades of Chaos axe from the 2018 game, although no new weapons are mentioned.

Some fans may recall that the ESRB rating of God of War famously spoofed Kratos’ use of double-bladed blades in the game, prompting Sony to ask them to remove it from the description. This summary mentions “bladed and handheld weapons” but gives no further details. It is unknown whether players can use other iconic weapons, such as Thor’s hammer, in the game.

As for the violence, the ESRB describes blood splatter effects and dismemberment as typical in God of War Ragnarok.

Players will also be able to use execution moves that impale enemies, and it mentions that repeated axe blows to a creature’s neck will result in decapitation. Finally, the ESRB description also confirms that players will visit different realms in God of War Ragnarok. 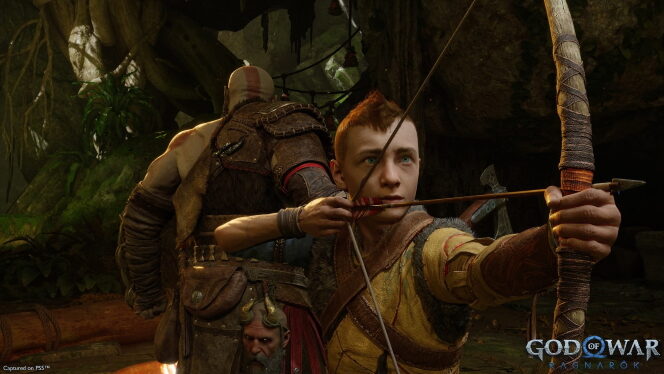 How many hours away is Ragnarok?

Insider Gaming, a new site launched by noted insider Tom Henderson, has shared details about the main campaign, side missions and even the length of the cinematic scenes in God of War Ragnarok. Neither Sony nor Santa Monica Studio has commented on this and probably won’t, meaning fans should take it with a grain of salt. However, the source is reliable, and the information makes sense.

According to Henderson, God of War Ragnarok is looking at a total of 40 hours of gameplay, all told.

Of course, that depends on what game style you play, but fans can expect a sizeable game (although there’s not much new here). Of those 40 hours, 20 hours of that time will reportedly be devoted to the main campaign. The main campaign itself contains 3.5 hours of cinematics and boasts a truly immersive, cinematic and epic story. Henderson’s sources reveal that the remaining 16.5 hours will be devoted to God of War Ragnarok gameplay, a story length that puts the game on par with the latest instalment in the franchise.

That leaves an additional 20 hours for Santa Monica Studio to complete, and that’s reportedly broken down into 19 hours of gameplay time devoted to side missions. One hour here is dedicated to cinematics. While God of War Ragnarok’s story is compatible with the 2018 main story, this means there are around 8-9 hours more side missions to come, according to Inside Gaming. God of War overall averaged 32 hours, so it seems Ragnarok is a bit more fleshed out.

It’s worth noting that the PS4 file size for God of War Ragnarok has also been leaked online, which is around 90.6 GB, twice the size of the 2018 story.

The PS5 file size will likely be smaller, but that means there’s a lot of content and quality packed into the game. This seems to be exactly what everyone expects from the Santa Monica studio.