REVIEW – Lara Croft is back after years of resting the franchise Crystal Dynamics has decided to reboot the origin of the titular main character. Square Enix was supportive of the idea, and thus green lit Tomb Raider (2013). A new and bold new Lara Croft, and we get to see her on the very first adventure she took. Part of this reboot seems to be influenced by the gritty reboots of the times, and that shows in this game.

I felt like I was playing a carbon-copy of DC’s Arrow series, I could almost substitute the opening lines from that series: “My name is Lara Croft, for a week I was stranded on an Island, now to continue with my quest I must find Tombs and raid them.” Hell, she even has now a signature weapon aka The Bow. The entire game takes place on a fictional island called Yamatai, in the Dragon’s Triangle off the coast of Japan. While that does seem rather limiting, it is a varied locale with snowy mountains, jungles, deadly caves, and even military bunkers. Does Lara Croft’s first “NEW” rebooted adventure worth your time? Or should you just stick to the Uncharted series for some relic hunting? Find out here!

The series has never been my favorite, the controls felt clunky, the story for each entry for the series got weirder and weirder (Remember Tomb Raider 3’s Area 51 level?), then the series had a few pseudo reboots and self-contained trilogies. So after deep sleep since Underworld we only got Guardian of The Light which was a neat experience, but not an AAA production. Thus was born the new and rebooted Tomb Raider, and to much everybody’s surprise, it was a commercial and critical success. 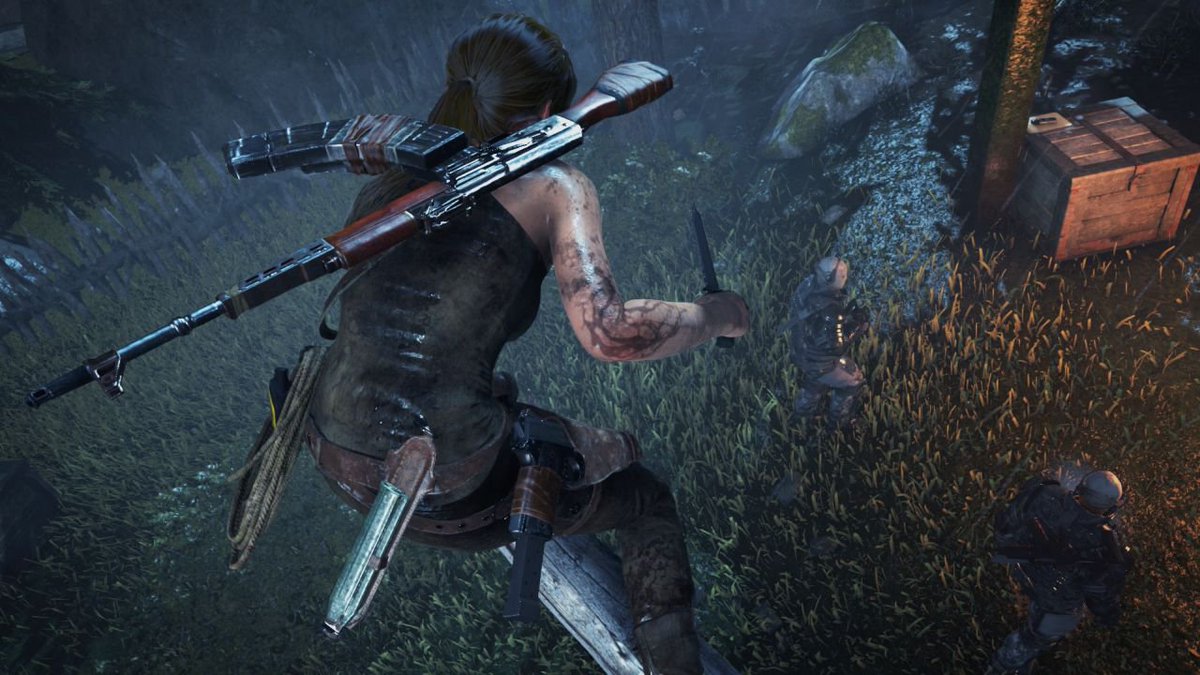 The Island it keeps us here.

The story of Tomb Raider (2013) starts rather in media res. The ship which is heading towards Yamatai is hit by a storm, and all of the crew ends up shipwrecked on the Island. It does not take long for Ms. Croft to get captured by a weird “native” of the Island. After a daring escape, we receive our first tools. A pickaxe, and the Bow. From there on we start to uncover the mysteries of the Island, with our friends, and crew members while trying to escape from crazy Russians, Cultists, and even giant monsters.

To do this we must use our wits, and guns the best way we can. The enemy variety is lacking, and there is a little mix ’em up every now, and then, however, it is not the best regarding the franchise. There are no wacky aliens or Raptors in this story. Instead, we have crazy people with guns, and a few mysterious ghost. It is okay, and luckily the game while has rather generic enemies, this reboot while in grittiness can top the Uncharted series regarding action sequences. 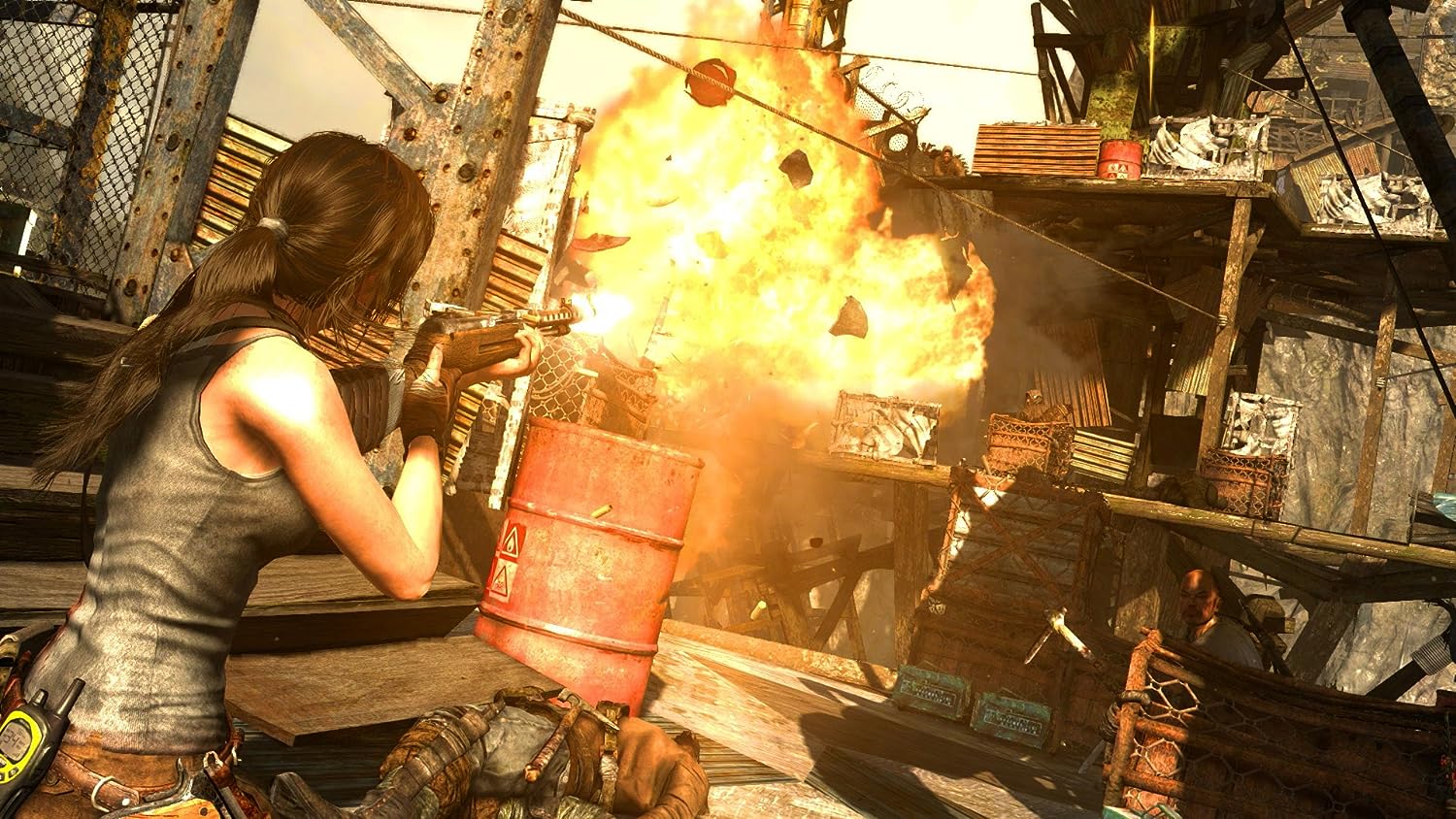 The scenes complement the story very well, and never feel forced, but they do seem a bit cliché every once in a while. The grittiness is not just reflective in the action scenes, or the story, but also in gameplay. When Lara uses the bow and it punctures the neck of an enemy it shows the death knell rather graphically. Same goes though for Lara Croft dying in this game. While it is her first adventure, she gets covered in dirt, blood, and screams in agony from a lot of pain during the early sections of the reboot.

I found the showing of this inexperience in the story to be unsettling, and at times felt forced. Although later down the line it is reduced regarding brutality, it is not a Teen rated game, much like the previous ones, but a more Mature title. The themes of the story are also handled rather seriously, and there are not many fun or wacky adventures for Ms. Croft. Still, maybe a few more enemy types could have added more depth to the gameplay variety, and maybe to the story.

Ms. Croft is now Level 10, pull out that Minigun

We start with two meager weapons in the reboot (bow and pickaxe), but after progressing through the game we get to … you guessed it level up our character, and upgrade our weapons! Hurray! Now before you turn tail and scream at the top of your lungs: why! This reboot does it pretty well; it is one of the only small handfuls of games I was willing to search the Island for optional extra items and dungeons.

There’s not much Tomb Raiding in here due to the nature of the story, but the optional Tombs are fun puzzles, with great rewards. Leveling up is also done and speed up by the fact that we get more experience not just by killing, but by finding relics, maps, raiding tombs, and hunting animals. Everything adds towards progression that will make our Lara be a tough fighter and explorer.

I do find it hilarious though that in some of the tomb raiding we find a pistol or shotgun part stashed among the ancient treasures. As Lara opens the ancient treasure chest, gasps, and then pulls out a silencer from the treasure pile. There’s explanation to it, where the Island people moved into these secret tombs, but still, it seems to be one of gaming’s best comedic moment.

The weapon upgrade system is also neat; you have to collect, and loot to upgrade the weapons at our disposal. The upgrades are luckily not run of the mill, so instead of firing faster or having less recoil, our weapons get alternative firing power modes or arrows that pour napalm everywhere. In the end instead of using all these fancy weapons I enjoyed using the bow most of the times. It is silent, deadly, and can be accurate with the proper upgrades.

With an upgrade, we also get the ability to shoot through multiple enemies. Stealth kills are also more viable with the bow since compared to the silencers they are only available in the late game. It matches with the game’s theme, and even if you do become Rambo in the end with all the weapons, I still recommend using the bow, so that for later boss battles you’ll have enough ammo for the real big guys. 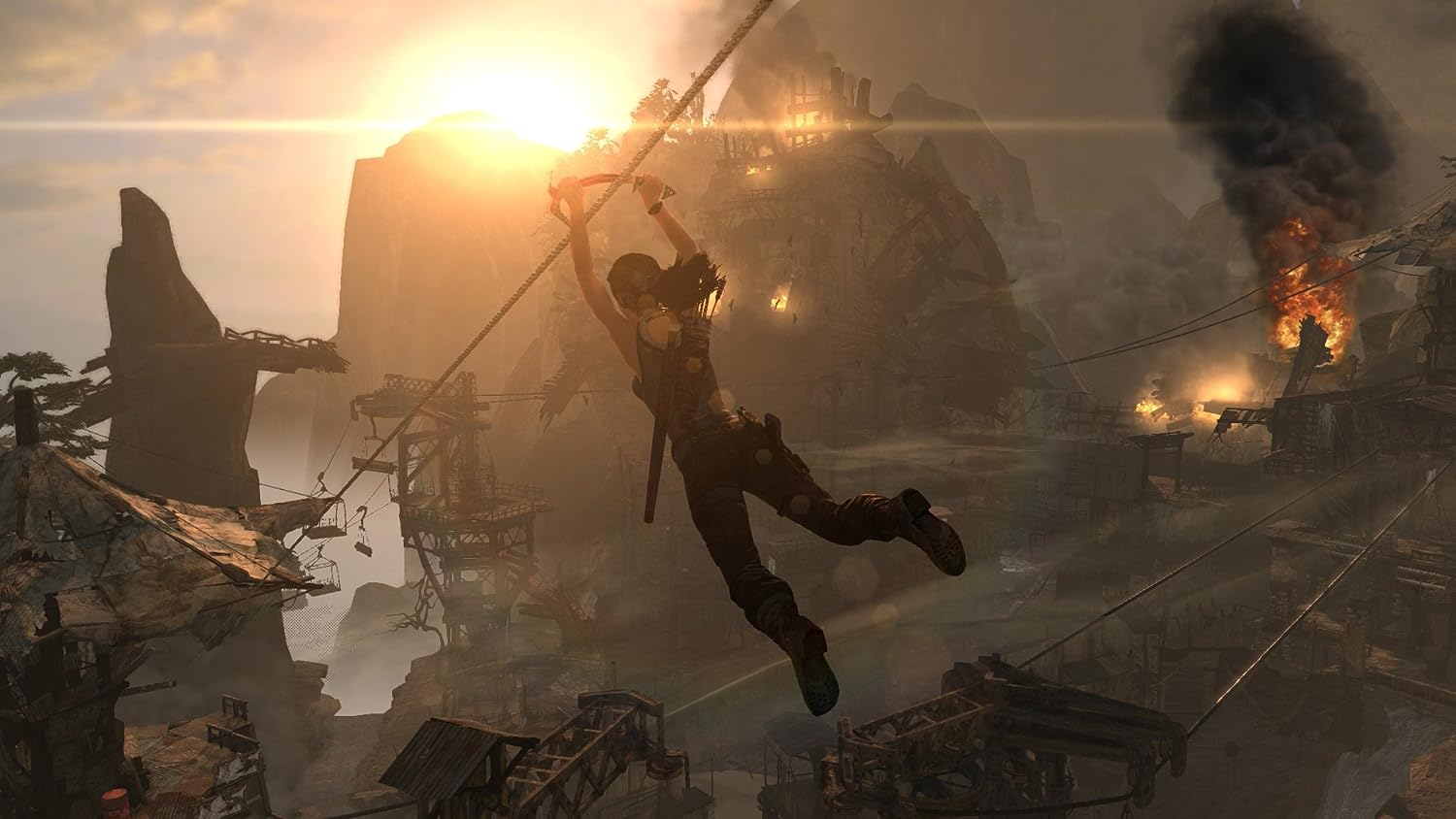 The graphics for Tomb Raider are great, but there are some issues with it even on the Definitive Edition. Outside locations are only good, and sometimes the textures look muddied, or downright horrible. Although this is rare in the game, it was disappointing to see that even this edition had its issues. The interior designs of the buildings and the caves are top-notch, and there is no muddiness to be seen for miles. The effects, especially the fire and explosions are great, and a lot of scenes look fantastic on the new consoles. Rain is also well animated in the game, but it has a weird rain on camera effect which at a time is a bit distracting and ruins the immersion.

For a three-year-old game, it looks and runs great, even if there are some problems with the outside sections regarding graphics. The style, however, is luckily not just grayish rainy days on an island. From creepy bunkers to a shiny beach, to a blood smeared fortress we see it all in Tomb Raider, and luckily even if it is gritty it oozes style.

It might not be the greatest looking game out there, but the developers have done a great job.

Lara Croft had a long slumber, but now with the help of SquareEnix, and with Crystal Dynamics rebooting the story, this entry might be the proper way for newcomers to join the series. It is a fresh take on our adventuring hero, but for some, it might be too gritty. Still, if we can look past that, and how brutal the game become (or that the multiplayer is a pointless addition), we get one of the best semi-open-world games for this generation of consoles.

+ Great graphics
+ Upgrade and skill system that is good, and not pointless
+ The story is entertaining…

REVIEW – Lara Croft is back after years of resting the franchise Crystal Dynamics has decided to reboot the origin of the titular main character. Square Enix was supportive of the idea, and thus green lit Tomb Raider (2013). A new and bold new Lara Croft, and we get to see her on the very first adventure she took. Part of this reboot seems to be influenced by the gritty reboots of the times, and that shows in this game.   I felt like I was playing a carbon-copy of DC’s Arrow series, I could almost substitute the opening lines…
Tomb Raider: Definitive Edition – Eli Roth Would be Proud
Tomb Raider: Definitive Edition – Eli Roth Would be Proud
Dante
A great reboot that has some interesting features, while the story and presentation are dark, it has its purpose. A must for fans of the series, but not for the faint hearted.

A great reboot that has some interesting features, while the story and presentation are dark, it has its purpose. A must for fans of the series, but not for the faint hearted.