The Evil Within 2 – Welcome to Your Personal Hell PREVIEW – The first Evil Within was one of my favorite horror games of all time. It took many horror ideas and tropes, put it in a blender, and added some concepts from Inception. The result was a trippy, and borderline insane video game, with a few big actors in it. In the end, it was a well received, and commercially successful title with three DLCs that provided further depth to the lore. Not much has been heard since the first game’s release, but at this year’s E3 a trailer was released. Not only that, but the release date is this year Friday the 13th!

Mobius, the previous game’s shadowy organization, has developed a new S.T.E.M. machine, but this time the corporation is trying to control an alternate reality with a core. Sebastian is pulled back into the world of S.T.E.M. when it is revealed that his daughter believed to be dead is, in fact, the core. 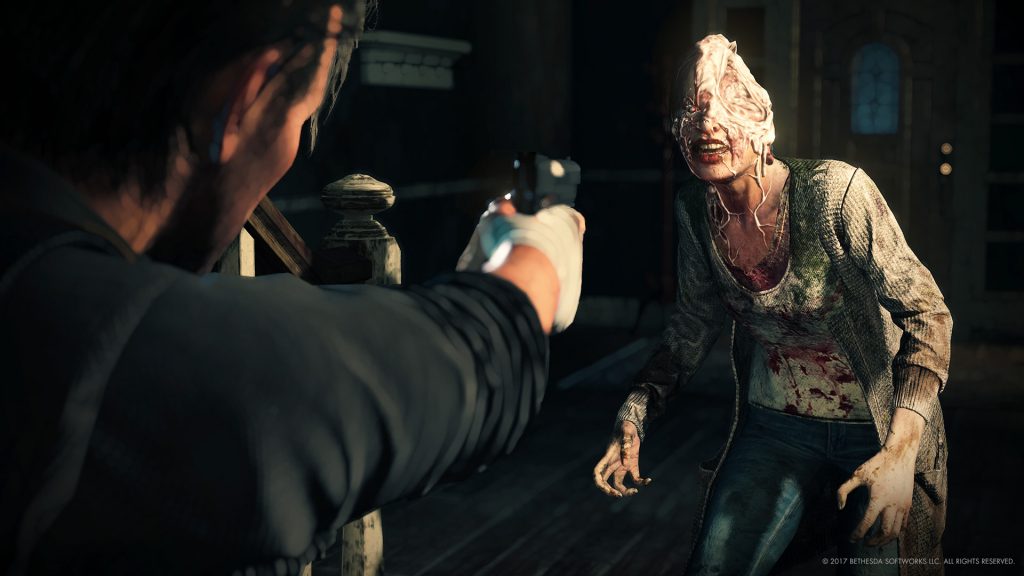 Once more into the depths

The story, based on the trailers, and gameplay footage is looking as hectic, tense, and gory as ever.  It also seems to have a much more focused antagonist. While the first game was more about figuring out just what the hell is happening, Sebastian in the second game is now going in as a veteran of weird dimensions.  Not all of the antagonists are weird monsters, but some are now other people such as Stefano Valentini a serial killer with a fancy for the arts, and there is also Theodore, a priest with conviction.

Much of the plot is still under wraps, and if Ruvik will be back, or if there will be any other main villains besides Theodore and Stefano. Oddly enough Shinji Mikami has stepped down as director after the first game, and the director of the DLC John Johanas has taken over the directorial duties, with Mikami being a producer. We shall see how much the story changes due to this shift in leads.

A change of scenery, and violence

Instead of a closed environment, with a linear path, the player is now dropped into a hub world called Union.  Also as Sebastian, we now have the option to complete sidequests around the hub world and to enjoy the content as much as we want at our pace. The Evil Within 1 had a rather breakneck pace at the time, and while it was not a bad thing, I am happy to see that the weirdness does not start simply at sudden weird location changes. The developers stated that while there is still the usual gore for the sequel, they also aim to make it more grotesque and terrifying.

The gameplay is also less restrictive compared to The Evil Within 1. While in the first game you had to save up ammo, and be stealthy most of the times (at least in the early chapters), in the sequel you can go guns blazing, or full on stealth. The gameplay has been adjusted for this as well, and the player is now able to craft ammunition for himself, not just simple bolts. The skill tree also returns with the usual upgrades to health, stealth, combat, recovery, and athleticism. As such new ideas appear for the sequel, but it is more of a refinement of the original, and not a total overhaul. As the skill system, and ammunition crafting (while being limited) was available in the first game.

The game will support HDR and 4K on both the PS4pro and the Xbox One X, and the entire graphics engine has been retooled. A mix of ID 5 and ID 6 tech where most of the issues were removed from the previous game. Also, a few aesthetic choices were made based on the feedback of the previous game such as no more letterbox, and the weird aspect ratio has been killed off. The lighting has also been severely improved based on the footage, plus the graphics look insanely good.

The voice work is an unknown factor regarding quality as there is no Jackie Earle Haley to voice Ruvik, or Jennifer Carpenter to voice Juli Kidman plus neither is Anson Mount (from Hell on Wheels fame) is returning for the sequel. It is a tad bit worrying, however, based on the trailers, the voice acting seems to mirror the quality of the original which was superb.

Just like Wolfenstein: The New Colossus, The Evil Within 2 is a refinement of the first game’s concepts. It advances the story and the gameplay mechanics, but nothing genre is breaking or changing. In the end, it looks to be a better, and more cohesive sequel (if this can be said for this franchise at all).

For those who did not enjoy the original game, the sequel might be able to turn the naysayers to like the franchise.

Looks to be a substantial upgrade compared to the previous game, regarding graphics, sound design, and story. Gameplay seems to be a bit familiar, but refined.