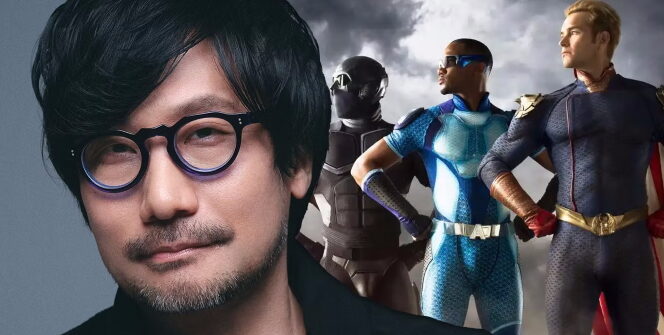 MOVIE NEWS – After Hideo Kojima admitted to shelving a project similar to The Boys, showrunner Eric Kripke and star Antony Starr are pushing for an adaptation.

Recently, gaming industry mogul Hideo Kojima took to Twitter to express his thoughts on The Boys. He began by saying that he “quit after 3 episodes of season 1,” but ended up watching the entire series. Interestingly, he notes that a project he had “been warming up for a long time” had to be shelved because its concept was strikingly similar to The Boys. However, now there has been a direct response from the showrunner and one of the main characters of The Boys, who has encouraged Kojima to make a direct adaptation.

The Boys’ showrunner Eric Kripke responded to Kojima, stating that together they could “team up and conquer!”

Kripke seems delighted and excited to be working with Hideo Kojima on a game centred explicitly on The Boys and also said he is a “huge fan” of the author. It’s exciting to see such a reaction from the showrunner of The Boys, who has also been supported by Antony Starr, who plays the sinister Homelander in the series, to make a Kojima-led The Boys game. It remains to be seen whether Kojima will accept Kripke and Starr’s invitation.

The fact that Kripke and Starr want Hideo Kojima to adapt The Boys rather than simply move forward with their own project says a lot about their openness to Kojima’s direction and design philosophy. The fact that Kojima himself has already cooked up a similar project might suggest that he might be willing to accept this collaboration with Amazon and all concerned. Hideo Kojima’s own idea seems identical enough to be turned into a video game version of The Boys.

His concept of a “special detective squad facing off against legendary heroes behind the scenes” is still pretty spot-on for The Boys.

Although The Boys is probably more random and irreverent than Hideo Kojima’s protagonists would have been. Kojima also notes that Mads Mikkelsen, known from Death Stranding, was also considered for the lead role, but it’s unclear whether he would have played a character similar to Butcher or Homelander.

It will be interesting to see if such a project does indeed move forward for The Boys in the future. So far, however, neither Kojima himself nor Kojima Productions have responded publicly.

Please come make a #TheBoys game. We can team up and conquer! Huge fan, btw. #TheBoysTV