FIFA 23: Trailer, Release Date & Everything Else We Know So Far! [VIDEO] EA wants to make FIFA 23 as memorable as possible this autumn on PC, PlayStation, Xbox and Stadia.

The countdown to FIFA 23 has begun, and EA Sports this afternoon revealed more details about the latest FIFA, the first wave of Cross-Play, the two World Cups featured in the game, women’s football and new gameplay technology, HyperMotion 2. But before we get into the meat of the game, check out the trailer (at the bottom of the article) and the release date!

Developed by EA Vancouver and EA Romania, FIFA 23 will be available on PC, PS5, PS4, Xbox Series X/S, Xbox One and Stadia on 30 September, with Ultimate Edition purchasers getting access three days earlier.

EA Sports aims to deliver the most advanced, realistic and complete FIFA ever.

No details are available yet about HyperMotion 2, which will be exclusive to PC, PS5, Xbox Series X/S and Stadia, but EA Sports says the new game technology will bring exciting new additions to the FIFA experience, making the next edition of the game “the most realistic in history”. This promises more responsive, intelligent and authentic movement for players and teams. Work has also been done on a new smart dribbling system, a more natural and smooth transition to the shot, a completely new acceleration mechanic and greater “player awareness”. 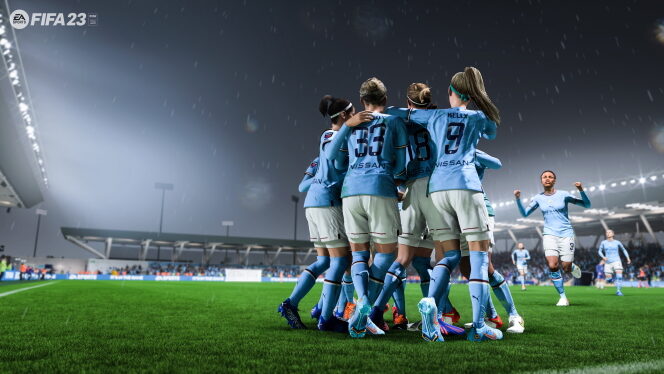 Women’s teams will also feature heavily in the game, with the Barclays Women’s Super League and Division 1 Arkema, England and France’s top women’s football leagues, being added as additional attractions.

All of these factors combine to create the biggest FIFA yet, and it looks like we’re in for a great experience in terms of content. Indeed, they guarantee the most comprehensive gameplay in the franchise’s history, with over 19,000 players, more than 700 teams, over 100 stadiums and more than 30 leagues, including LaLiga Santander and the Premier League, as well as the UEFA Champions League and all other European leagues. EA Sports is working on several improvements and innovations to the career mode, Pro Clubs, Table Soccer, and FIFA 23 Ultimate Team, although these will have to wait for future events. There was talk of a training centre designed to make it easy to learn the basics of the game and hone your skills before jumping into a match.

The most interesting detail in this first wave of information relates to cross-play, namely that it exists in the game, although it will have its limitations: it only works between versions using the same game engine. What does this mean? Here’s what it means:

Cross-play between PS5, Xbox series and PC versions.
Cross-Play between Xbox One and PS4 versions. The Nintendo Switch, as always, is on its own this time around, and the Legacy Edition has its limitations. Another detail that we could already infer is that the PC version of FIFA 23 will be next-gen this time around, which EA themselves have confirmed.

Lastly, cross-play will only be available in 1v1 modes, so offerings like Pro Clubs will be left out. Those interested in the simulator will be able to delve into Hypermotion and other features of the game with a tape on 27 July, with Career Mode (1 August), Match Experience (5 August), Club Pro and Volta modes (8 August) and FIFA Ultimate Team (11 August) to be announced at a later date. But until then, remember: FIFA 23 will be released on 30 September.