REVIEW – Generic start! Six years after Darksiders II, here’s the sequel, which changed many things, and it cannot be fully accepted positively, as compared to the previous two games, there might be some severe fallbacks so that we could be furious… or should I say, Fury-ous, here and there.

In Darksiders III, we get a new character, Fury, from the four horsemen of the apocalypse, but story-wise, this game’s story is happening BEFORE the first game’s (same applies to the second one, too). The female character, who even received ASMR videos via THQ Nordic‘s sponsorship, has the task of defeating the seven deadly sins. We can add the usual „you’ve been played” plotline, and that’s pretty much the story. 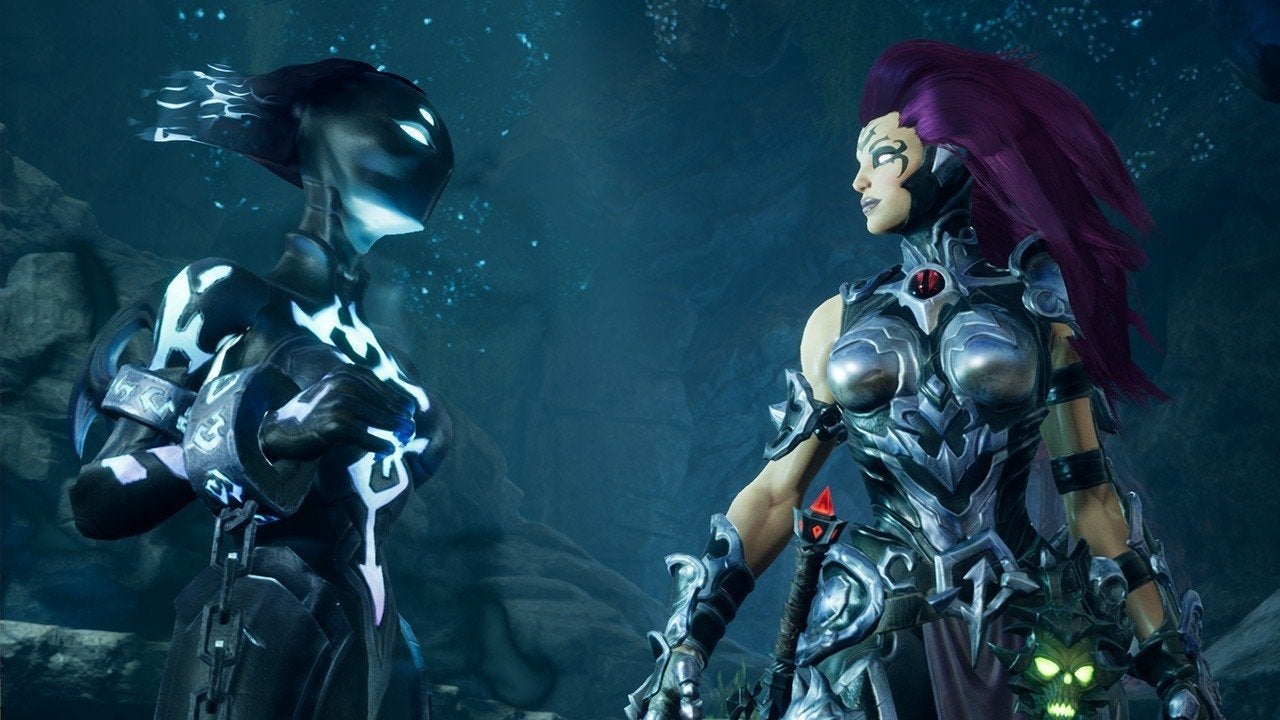 Fury’s character development (that’s a thing, believe it or not) might not be something that can bring the roughly thirteen hours of gameplay on its back, as even the gameplay has taken a turn away from the previous two games’. After Vigil Games’ disappearance, Gunfire Games (with its many ex-Vigil devs) effectively has brought over the Souls games’ style with our main weapon being a chain whip (although we can switch it out to something else, or even use two weapons!), utilising our dodge rolls, combos, and the like.

There are also skills that could be element-based (such as fire, but I wouldn’t like to get into spoiler territory). You can upgrade your weapons with crafting or by purchasing them in Vulgrim’s shop. These won’t help you much with difficulty, which I do not consider as a negative. However, there seem to be some random difficulty spikes – similarly to RIDE 3 from yesterday, how quaint… -, and the camera management doesn’t help things either: sometimes it might be too close to Fury, which 99% of the time results in you dying. It may be the biggest issue of the game. The gameplay – aside from the combat – seems to be good, because, with a bit of Metroidvania, you can discover a few things (not a lot due to linearity), which might be necessary as there’s no map in Darksiders III. At least the game is somewhat exciting in this aspect, because, as I previously mentioned, the game doesn’t take much time to beat. It took me thirteen hours even with me dying a few times, making me replay several minutes, as the checkpoint system felt terrible in my opinion. However, it helped me check out the enemy designs (and the enemies are mostly your run-of-the-mill types, with some new ones…): they were below average, and, at the other end, the seven deadly sins looked like well-designed. (Which means there are good and bad things at the same time in this aspect, which is somewhat of a running gag with Darksiders III…)

However, the same cannot be said about the game itself – Darksiders III seems to have some outdated graphics. Unfortunately, it also seemingly lacks in the musical aspect. However, then we get to the voice acting, and would you look at that? Cissy Jones, the voice of Fury, fits the character down to a tee! I need to get back to the visuals for a moment, though: I have noticed some clipping here and there, and there’s also some texture pop-ins in several locations. The art style, though: oh boy, this deserves applause! The game might not be a technical masterpiece, but its art seems to be up there! You should look for a few trailers of the game: you’ll find what I mean…

It was ridiculously difficult to talk about Darksiders III without spoilers, but maybe I could pull it off. I need to say this: do NOT buy Darksiders III on full price. It’s a good game, but we should have received MORE than this. I’m not saying it’s a terrible game, nope: it’s a different game, perhaps too different. It has some fun, pleasant ambience, but I still recommend it to everyone. It’s a 7/10, no more – if it was released in early 2019 with some extra polish, somewhat refined gameplay (with maybe a bit of movement back to hack’n’slash?), it could have been an 8 out of 10. Fury’s story is alright, but we should prepare for Darksiders 4 because we all know it’s going to happen… but please, don’t make it in 1.5 years because the result will show that.

+ The art style
+ The voice acting
+ The seven deadly sins

REVIEW - Generic start! Six years after Darksiders II, here's the sequel, which changed many things, and it cannot be fully accepted positively, as compared to the previous two games, there might be some severe fallbacks so that we could be furious... or should I say, Fury-ous, here and there.   In Darksiders III, we get a new character, Fury, from the four horsemen of the apocalypse, but story-wise, this game's story is happening BEFORE the first game's (same applies to the second one, too). The female character, who even received ASMR videos via THQ Nordic's sponsorship, has the task…
Darksiders III – Fury Souls 3
Darksiders III – Fury Souls 3
V
A bit different from your regular Darksiders...

A bit different from your regular Darksiders...