Valfaris – In The Grim Future There Is Only Metal!

REVIEW – The creators of Slain are back once again to tackle metal, death, gore, and difficulty. While their initial outing was something that could have been done better, Valfaris is an entirely different beast. It seems the creators have learned from their mistakes and went back to the drawing board, and probably had a long think about where to next, without losing their main inspiration: Metal.

Rather than trying to be a Metal version of Dark Souls the creators decided to take their ideas into the far reaches of space. The developers are putting everything they got into this game, and it might actually be a turning point for them. Welcome to the future where there is only Death and Metal!

Reach for the stars

The story of Valfaris is a rather straightforward affair, you are Theon bent on revenge after your homeworld finally reappears from the void. The once pristine floating paradise is now overrun by alien infestation, mutants, and a rebel army. It is up to Theon to cleanse the Fortress of Valfaris, find his father who has caused all of this despair.

There is very minimal lore in Valfaris, and there are no twists or turns throughout the story. It is mostly Therion just going forward, slaughtering everything in its way to reach his goal. If you want to play Valfaris for the story you’ll be disappointed, it is not much here, it does the bare minimum, but in this case, that is just enough. It does not get in the way of the gameplay, the aesthetic, or the shooting. You go from Point A to B, and sometimes there are objectives to do, but it is a fairly linear game, with a few semi-open ended sections. There is no lore to unravel, or hidden story bits to uncover, it is instead similar to the early Contra or Metal Slug games. 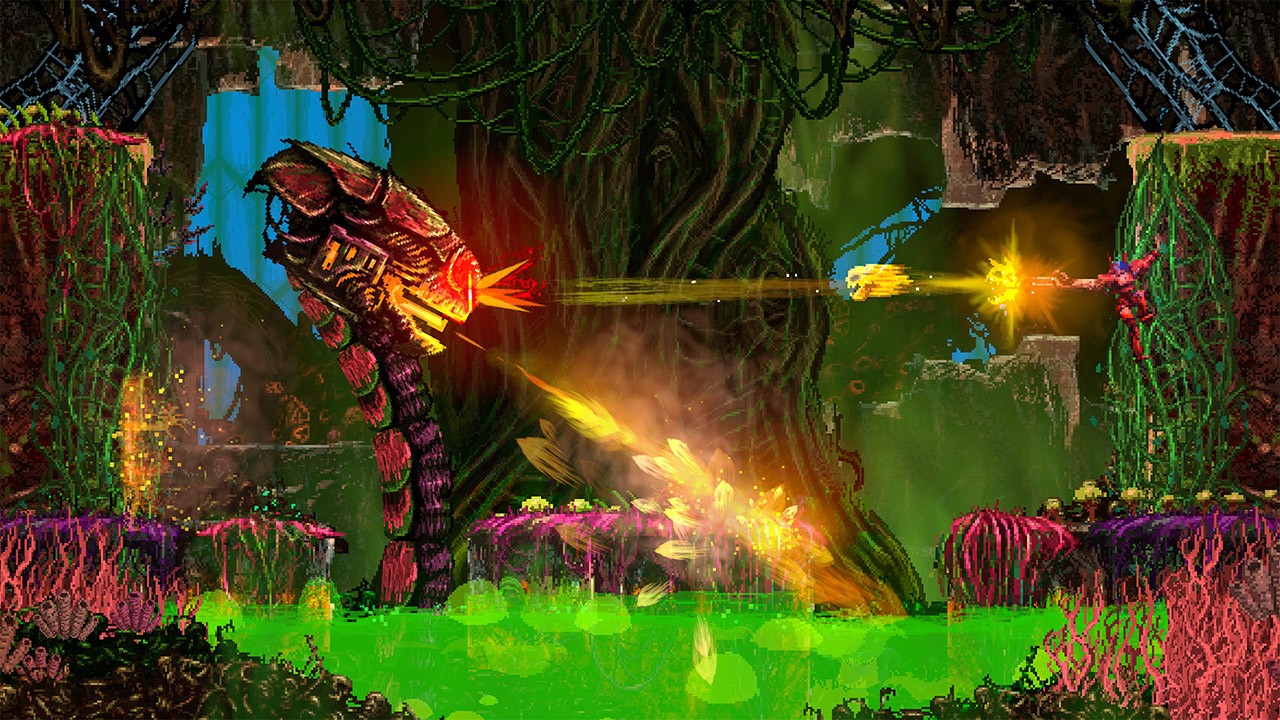 With the Sci-Fi setting comes new weapons to try, and rather than trying to stay completely melee-focused like Slain, the developers lean heavily into destructive weaponry, and long-range combat. You got your shotguns, a machine gun that drips blood all the time, a plasma pistol that shoots in a spread shot, a rail gun, a flame thrower, an electric cannon, and a rocket launcher with homing missiles. We also get some melee weapons, such as swords, battle axes, plasma swords, and even a tentacle weapon that sucks the life out of enemies. A parry and block system is also in the game, but with the way it works is that Theon has a shield that can not only block melee blows but even catch enemy projectile (at least most of em). The player can send the projectiles back in they did a perfect block.

The gameplay loop is pretty satisfying, as the game does throw a number of obstacles towards the player. There is, first of all, a checkpoint system, and these can be activated by finding items called Resurrection Idols across the levels. The twist is that the more resurrection idols you have the bigger health and energy pool you get. Throughout the game the number of Idols you can carry are raised. Also at the end of each level the player is able to bank in Idols to gain more upgrade material for their guns. The trade-off is that if the player dies and did not activate a close enough resurrection point, well then they will have to beat most of the level and bosses over again. Although in my playthrough I did feel that checkpoints that can be activated were distributed fairly throughout the level. So it is up to the player how much risk they want to take on a level.

Speaking of bosses, I was surprised how creative some of them can be, and rather than just be shooting them in a weak spot – they end up being a bit of a mini-puzzle in certain cases. None of them felt cheap or annoying, and while they are difficult if the player uses the correct weapons or tactics some of them can have their health melted pretty quickly. The bosses range from giant mutants, ancient undead lord, and even a brain trying to consume the player. All in all the gameplay is pretty much almost perfect.

The only gripe I have in terms of the gameplay is the controls are sometimes not the best. Aiming is taken straight from the good old Contra games, so you can aim only in eight directions, which can be a problem with some of the weapons and their accuracy. The controls also caused a bit of an issue in some platforming elements where one wrong move, even if by accident and an entire section has to be restarted.

Still, besides this the gameplay as mentioned above is almost perfect. 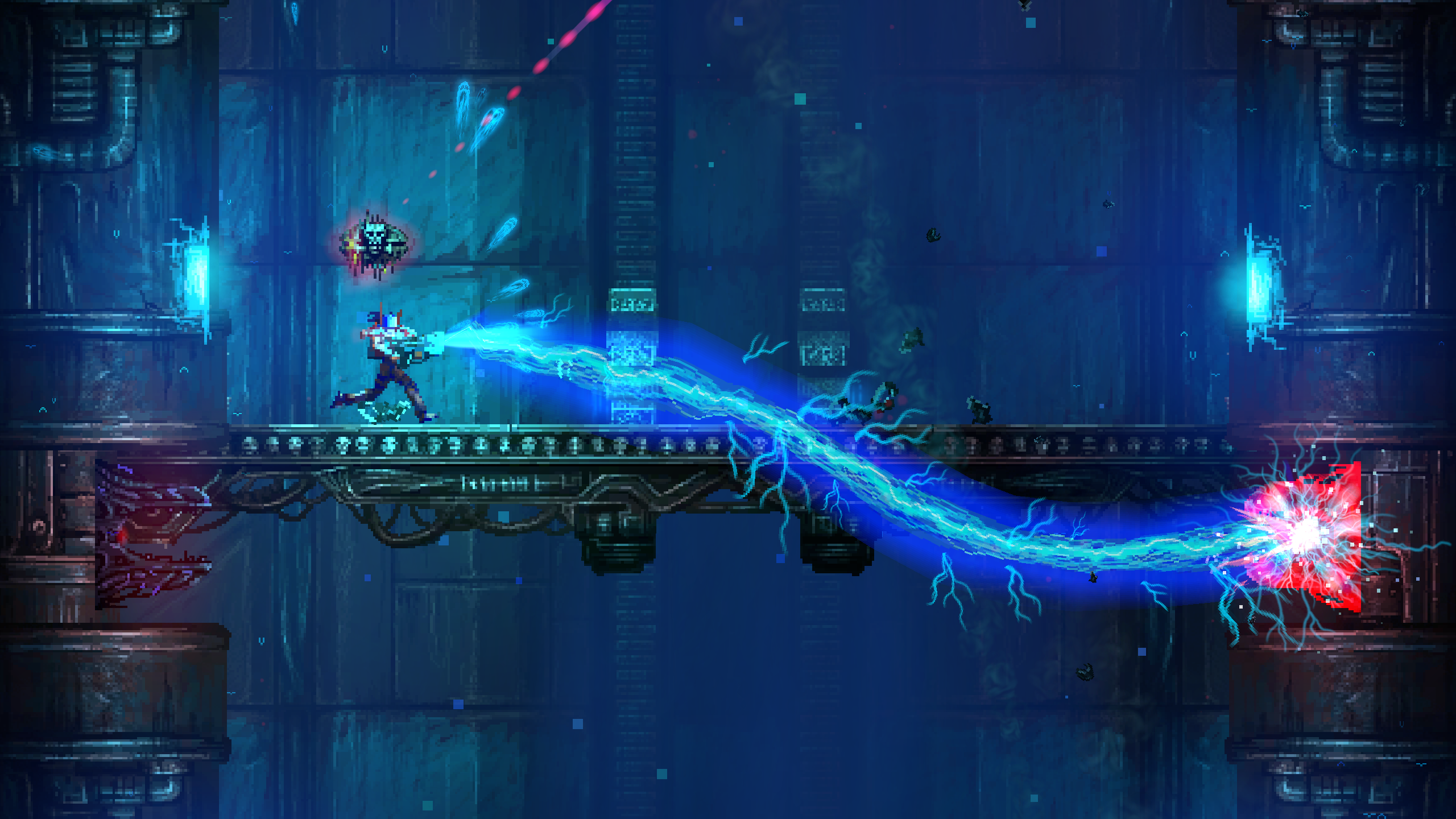 In space, nobody can hear you Rock’n Roll

The main selling point of the game though is its aesthetics plus the music. While I understand some people might be dissuaded due to the pixel art nature of the game. It has a very distinct style, and all of the enemies, environments, weapon designs are pretty great. Everything has that 80s Heavy Metal sci-fi looks to it, and the environments are especially impressive. There are some light puzzle elements and hidden secrets in the levels, but they are not difficult to find, as the art style is able to highlight them if the player is clever enough to find those hidden nooks and crannies.

With the 80s Heavy Metal Scifi look comes, also the violence of such scifi, and oh boy the game does not disappoint. The enemies and the player have different animations depending on how or where they die. Feedback for killing enemies is great, and the player is awarded a spectacle of blood and gore like no other.

Valfaris’s soundtrack is probably one of the best soundtracks of 2019. It gets the blood pumping and adds even more atmosphere to that scifi violence. The sound effects for the kills and weapons have great feedback, and just a joy listening to this game.

Next time on Valfaris

The game can take roughly 7-10 hours on a first go, but there is also a new game plus mode, where enemies are more aggressive, the player has less health, but gets to keep all of their upgrades. In the end, Valfaris is a pleasant surprise near the end of 2019. While the pixel art might discourage some people, but just oozes style. The game runs fine on the Nintendo Switch, but I did notice some tiny hiccups when large amounts of enemies and effects would flood the screen. Nothing damning and it is rare, and it never happened on platforming sections for me.

Valfaris is a unique experience, and a throwback to early days of Contra, just with more gore, and better gameplay mechanics thrown into the mix.

REVIEW – The creators of Slain are back once again to tackle metal, death, gore, and difficulty. While their initial outing was something that could have been done better, Valfaris is an entirely different beast. It seems the creators have learned from their mistakes and went back to the drawing board, and probably had a long think about where to next, without losing their main inspiration: Metal.   Rather than trying to be a Metal version of Dark Souls the creators decided to take their ideas into the far reaches of space. The developers are putting everything they got into…
Valfaris – In The Grim Future There Is Only Metal!
Valfaris – In The Grim Future There Is Only Metal!
Dante
A perfect 2D shooter, with a great soundtrack, and gameplay. One of 2019s best surprises in terms of action.

A perfect 2D shooter, with a great soundtrack, and gameplay. One of 2019s best surprises in terms of action.

User Rating: Be the first one !
Spread the love
Tweet
Tagged Nintendo SwitchPCPlayStation 4Valfaris REVIEWXbox One