REVIEW – The fourth Serious Sam cannot compete with what the first two titles in the series offered almost two decades ago. Croteam can’t hit the level that they were on in the past. After the third instalment, the fourth one also won’t be a long-time experience (or product), or a memorable one for that matter.

Its system requirements are high. Who would play this on Google Stadia?

All the fluff for nothing

The game, which was announced in May (I might be wrong about this, don’t quote me on it) wasn’t going along the lines of a parody as the first game, but over time, the series grew into uniqueness, and it might have gone over the line by pricing its newest title as a 40-dollar game on Steam. Sure, the game could be impressing you in the first few minutes, but then, you might see chugging frame rates, or not, as the main bad guy interrupts the fun chain gunning events, only to go back in time by a few days. Oh, how many times have I seen this trope already? Okay, you might get thousands of enemies in the Legion system in Serious Sam 4 (which also got rid of its Planet Badass subtitle due to potential issues of localizing it), but in return, you will notice how the graphics and the animations are worse, and I might not be joking when I say that Serious Sam 3: BFE (which launched on PC in November 2011) looks better than this game.

Sure, you can say that the game isn’t judged by the visuals, but how you do a weapon dance on the maps to survive the hordes of enemies – however, you might run out of patience to get there, because the game has some pacing issues as well. After the fiery starts, it pulls in the handbrake, and it doesn’t seem to accelerate that much after it, potentially causing the classic combo of ALT+F4, followed by an uninstall. You will need some health and ammunition in some covers to take care of the waves of enemies, but you will notice how some of the cutscenes are terribly voice acted, and you might also consider that the level design is questionable at best in most cases.

So because of all this, I don’t think even those who played the first two games of Serious Sam can get into the groove of the fourth episode. The situation might be improved by cooperative gameplay (allowing up to four players to play together), meaning the „it’s better with friends” part is true here, but if you have nobody to play it with, you are screwed once again. And even if you do get a group together, you might be better off by playing the first two games, as they cost less, and they could provide better experiences. And this was just a single paragraph, all to say that the nostalgia factor alone cannot take this game to success on its own. Sometimes, you just need to hide away from the public and just do your thing in a limited fashion (so those who care can still find you). I follow this ghost style myself. 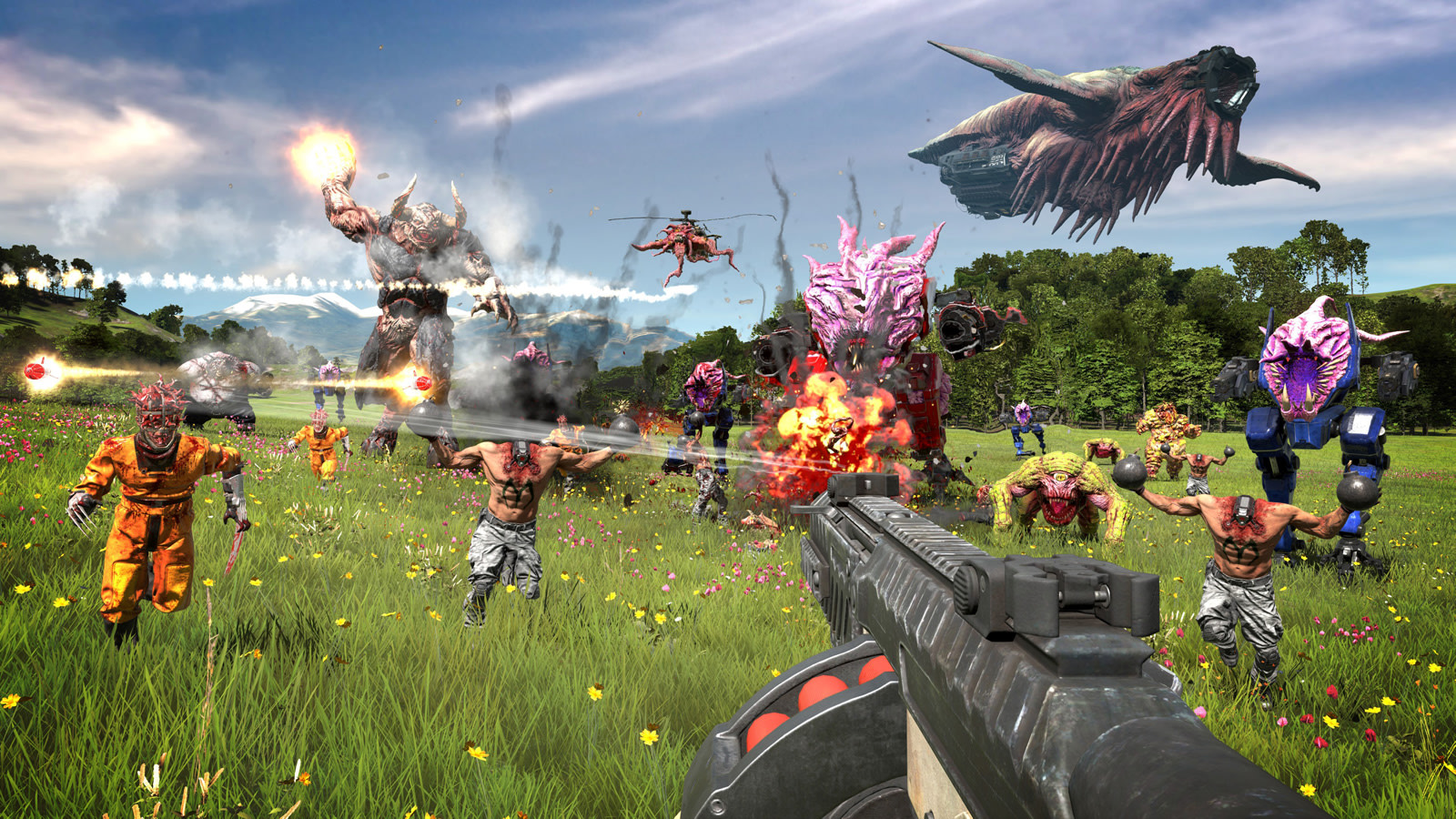 All the glitches for everything

I might have an old PC (let’s say it: yes, I do), but even aside from this, Serious Sam 4 had subpar performance due to having several glitches here and there (and I’m going to mention a few examples: enemies tend to die in one spot without animation, cutscenes had skipping animations, the audio had god awful balance, and I’m not even saying this as someone working with music as well), and you need to get used to all these if you want to spend time with the new adventures of Sam, which also requires a lot of grunts (a quad-core CPU at 2.5 GHz, 8 gigs of RAM, Nvidia GeForce GTX 780/970/1050 or AMD Radeon 7950/280/470 with three gigs of VRAM… and all this to run the game at 720p, 30 FPS!), but at least it also runs on Windows 7, even if Steam says otherwise.

Yet, Sam „Serious” Stone received some replayability with the branches, which offer different sidequests, which in turn provide different weapon expansions that bring in alternative fire modes. The gadgets give Sam active and passive perks, and yes, the ones that are the most useful are found the least. Oh, and the game is padded by tempting you to look around the maps by looking for the S.A.M. (Sirian Artefact of Might) that expands Sam’s skill tree.

All the characters for nothing

This game in its current form is a 6 out of 10, as it has the foundations, but once again, the way it was executed was terrible. Serious Sam 4 has bad pacing, the difficulty seems spiked here and the level design could play a role in this. Croteam has ignored everything for the sake of the Legion system. Thus, I can’t recommend this game, and I also need to add that Serious Sam 3: BFE had 16-player co-op, which is not even possible here. The devs probably decided to give out the modding tools shortly to save the game before falling into obscurity altogether. Roughly nine hours spent on this game was boring. And if that pops up in a Serious Sam game, that is a significant problem.

REVIEW - The fourth Serious Sam cannot compete with what the first two titles in the series offered almost two decades ago. Croteam can't hit the level that they were on in the past. After the third instalment, the fourth one also won't be a long-time experience (or product), or a memorable one for that matter.   Its system requirements are high. Who would play this on Google Stadia?     All the fluff for nothing   The game, which was announced in May (I might be wrong about this, don't quote me on it) wasn't going along the lines…
Serious Sam 4 – Not So Serious, Sam
Serious Sam 4 – Not So Serious, Sam
V
S.A.M - Sadly, already mediocre

User Rating: Be the first one !
Spread the love
Tagged CroteamSerious Sam 4 REVIEWSteam Disco Elysium: The Final Cut: The Australian Ban Is Over